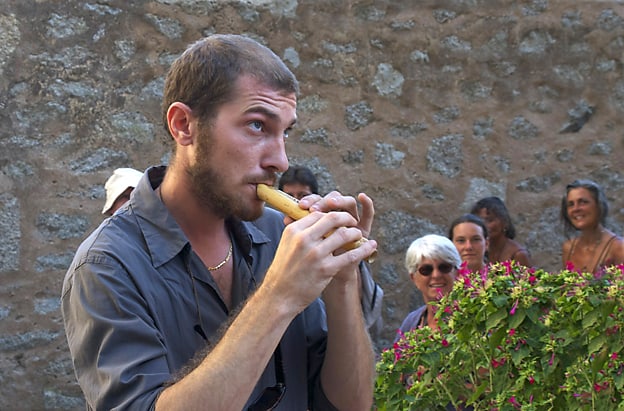 Every year Calvi’s citadel, which was built over 500 years ago, is the stunning setting for Rencontres de Chants Polyphoniques de Calvi.

Although I’ve visited Corsica a number of times, this was the first time I’ve been lucky enough to be there for this festival and I really hope it won’t be the last. The sky was as blue as ever, the sea as crystal clear, the people as friendly and the beer as refreshing but the music…. the music was simply breathtaking! 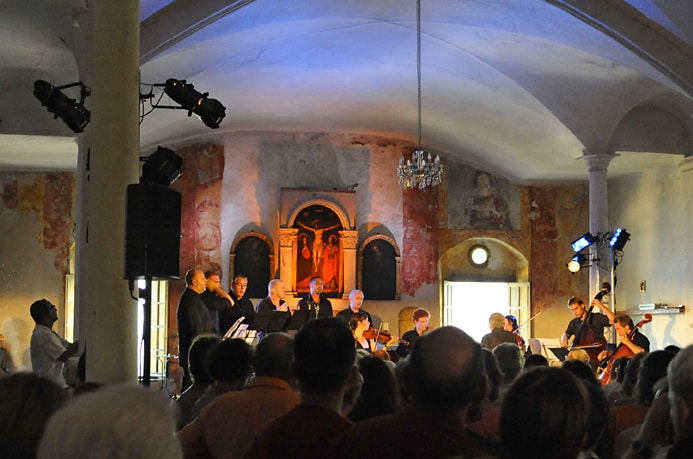 The festival was hosted by the polyphonic group, A Filleta. Their album Intantu transports me back to Corsica and a wonderful week of live music, from the buskers with their guitars playing gypsy swing at the foot of the citadel to the diverse collection of artists performing throughout the festival.

Most evenings there were two ticketed events but these were quite pricey and we only went to a couple. On the Saturday afternoon there was also a free concert which sounded interesting although I wasn’t familiar with the acts. I never imagined what a truly unforgettable day this would turn out to be!

On a hot sunny afternoon, on the last day of an already memorable holiday, we climbed the steps of the citadel to Place d’Armes and found a number of craft stalls but no sign of any music!

Following the flow of people from the square down a side alley we came to the 14th century Oratoire and settled into our seats awaiting over 3 hours of live music by artists from Italy,  Mali and Corsica. After a wonderful performance by the Italian singer, Francesca Breschi with her harmonium, accompanied by percussionist Ettore Bonafe, everyone got up and left! 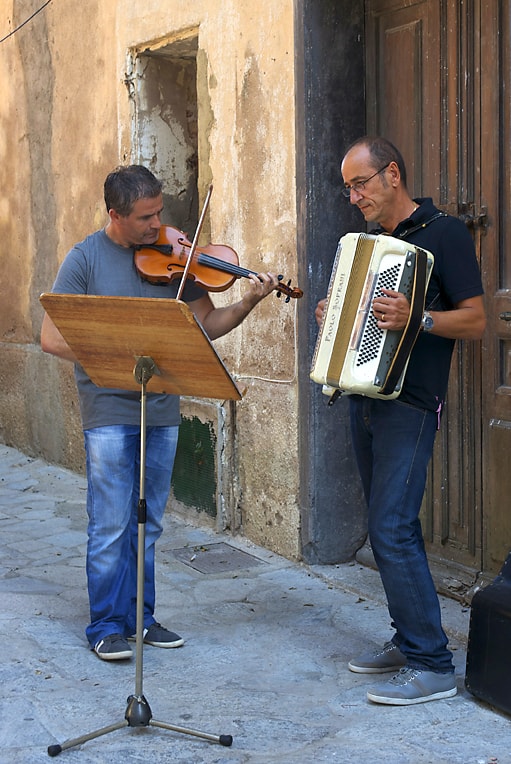 While wondering where the next performance might be, we heard the not so distant sound of a violin and accordion. The duo were playing in the street outside and after a delightful but short performance, a flute led us through the ancient alleyways to a small square, where the Sidikiba Coulibaly Trio from Mali were waiting to entertain us. The crowds soon filled up all the rows of chairs and overflowed onto walls and steps overlooking the little stage. A magical concert followed which delighted the enthusiastic audience. 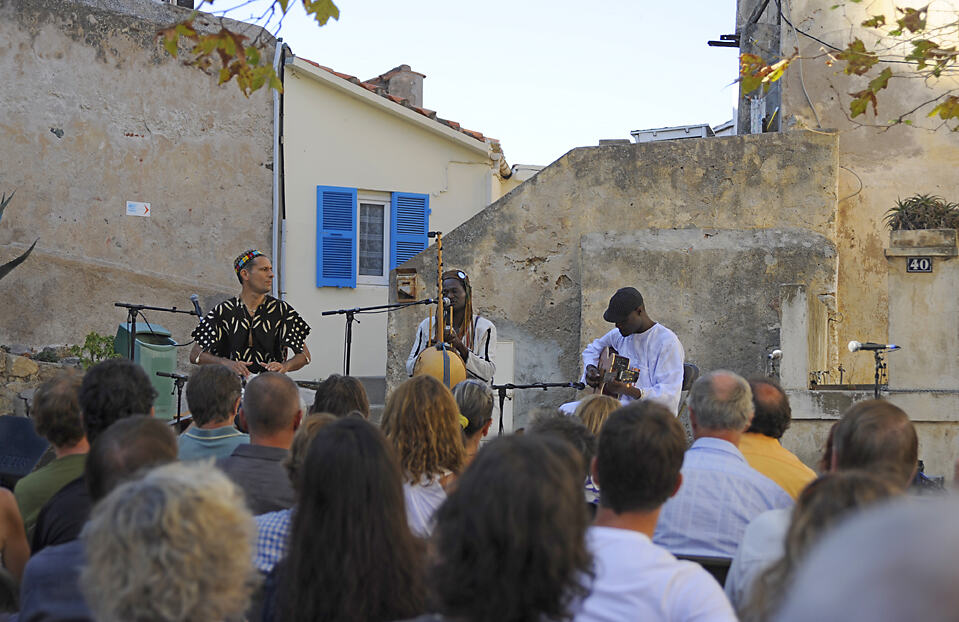 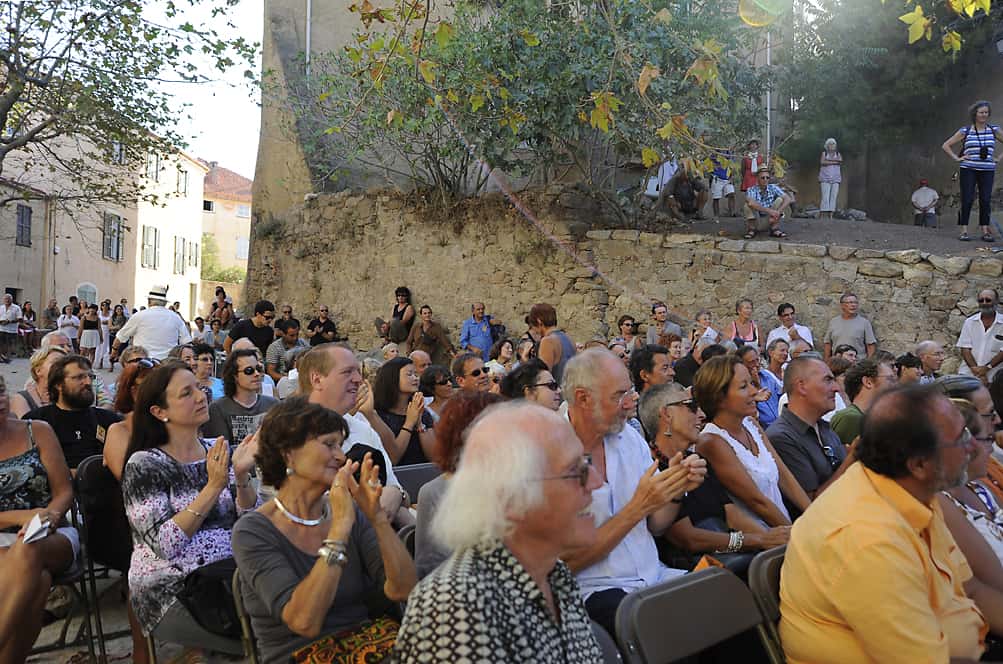 As the final notes dissipated into the ancient walls, nearby singing reached our ears. Down another alley and up some steps we found another violinist, Maria Zaharia, accompanying Manu Theron (vocals/tammorra) with a lively collection of Occitan songs. After about 20 minutes the duo led us up another street, down passed the cathedral, through the Place d’Armes and back to the Oratoire where they continued their performance. Maria’s fiddling and her infectious smile were a delight and Manu’s vocals were amazing. As they finished they welcomed on to the stage Daniele di Bonaventura with his bandoneon. 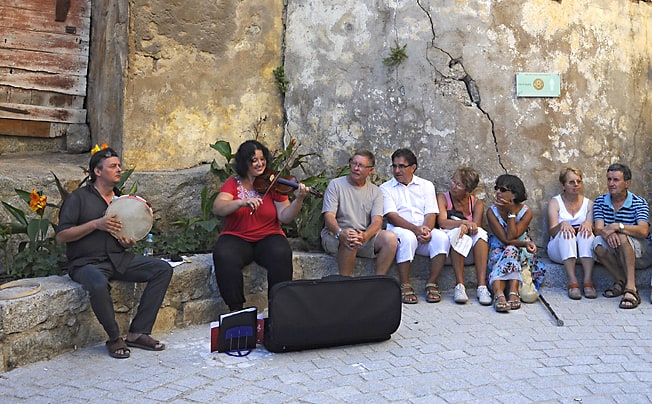 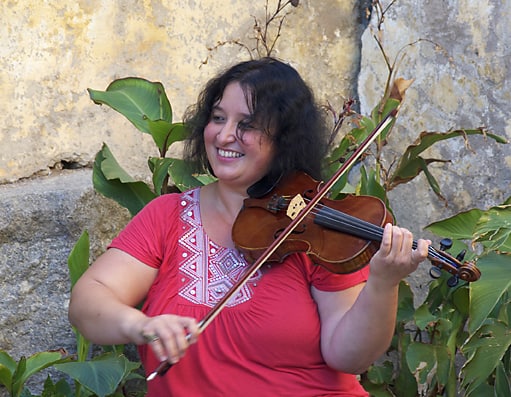 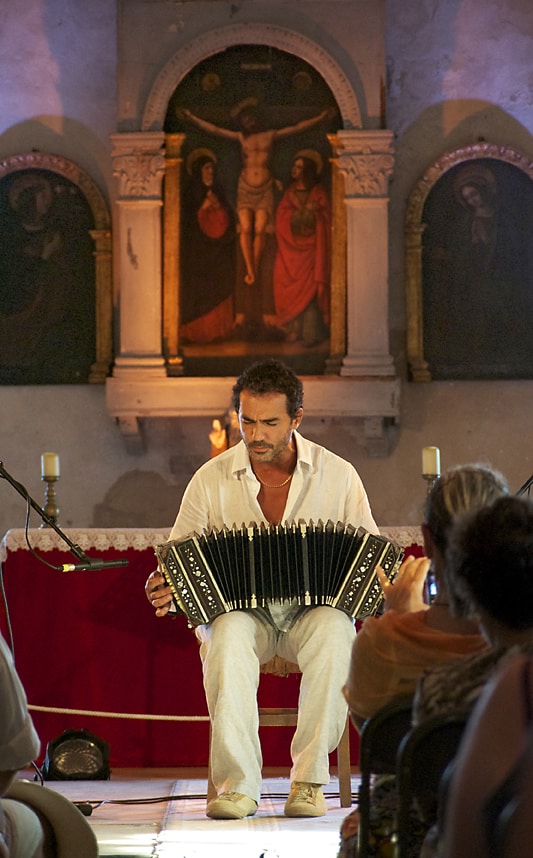 We were enjoying the music but didn’t want to miss another concert back at the square, Zi’ Riccardino with Riccardo Abate Esposito (accordion) and Maurillio Tallani et Imma Arguento (vocals and tammorra). Zi’ Riccardino is a delightful character that looks as if he just walked out of a story book from the Brothers Grimm. I only caught the end of his performance as they were singing, playing and dancing down the steps outside the cathedral. His energy and enthusiasm were contagious and it was a joy to watch. 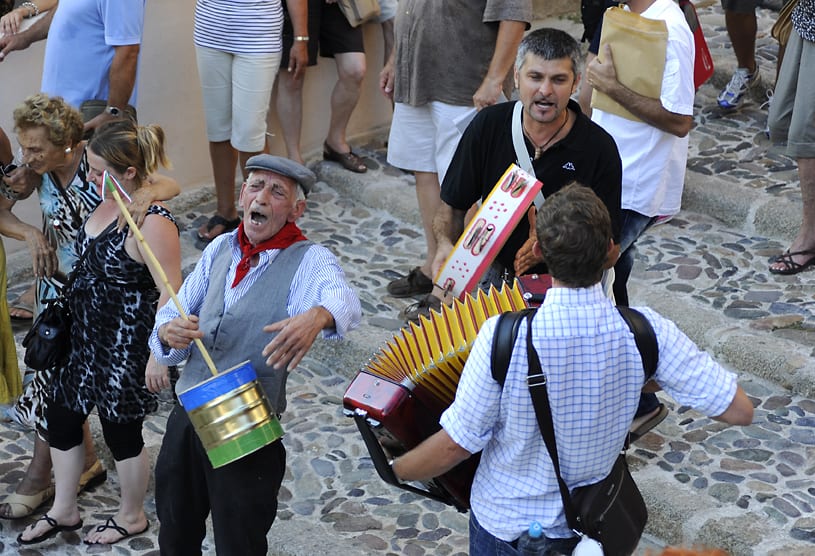 What a wonderful concept! A magical afternoon as one musical delight led into another and took us on a musical tour around the citadel and the festival wasn’t over yet… another free concert that evening – PVC Napoli Quartet’s Neapolitan folk music inspired by magic and mythology. With a stunning backdrop of the mountains across the marina they played tarantellas as the sun went down. We danced and clapped along. 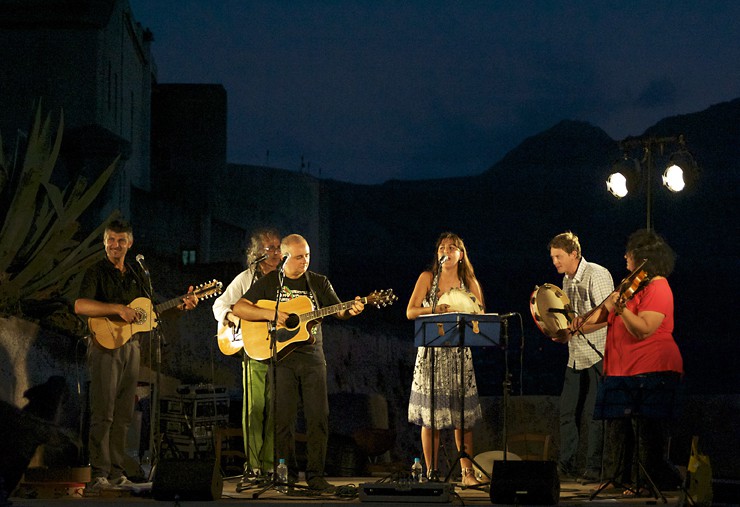 And still the day wasn’t over as we had tickets for the grand finale of the festival and as we waited to go in, a spontaneous and beautiful interlude of polyphonic singing started in the bar opposite the cathedral.

The first half of the concert was a real treat as many of the groups that had performed throughout the festival each did two or three numbers. The polyphonic Ensemble Imeri from Georgia were particularly outstanding. 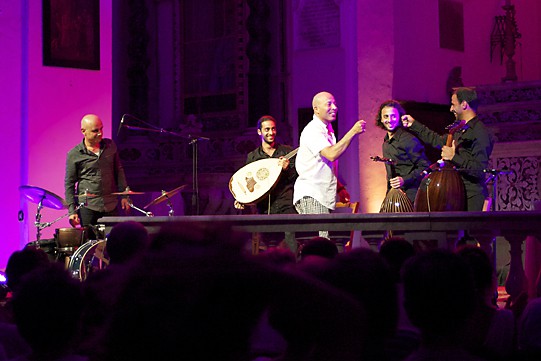 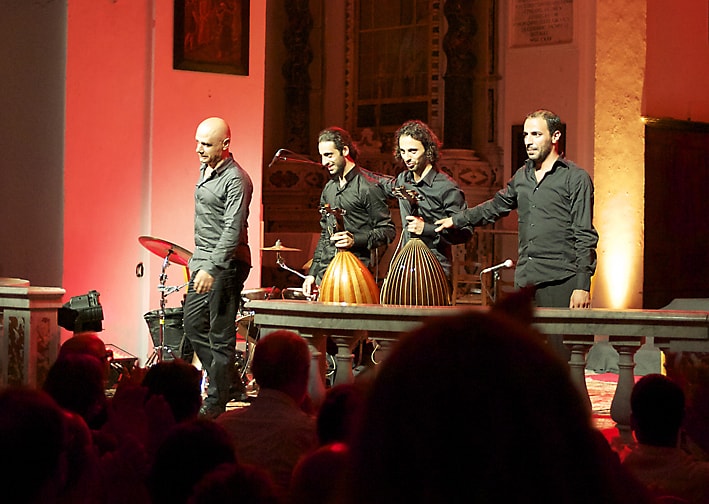 And to finish… Le Trio Jourban, Palestinian oud trio. The three brothers, who are fourth generation luthiers, and their outstanding percussionist Yousef Hbeisch, interacted skillfully to produce an outstanding and exciting performance of subtle and rich improvisations from their new album AsFãr (journeys). They took my breath away especially when guest vocalist Dhafer Youssef joined them on stage, his haunting vocals perfectly complimenting their beautiful melodies.

The concert ended well after midnight but outside wine and food were being served and the singing continued into the early hours – a wonderful end to the most amazing day!

To see more photos visit Travel with Kat on Flickr

Portovenere, the Cinque Terre and heaps of spaghetti with pesto

Portovenere, a delightful medieval town lies on the Golf dei Poeti, to the east of the Liguria region and was...