Overcoming my fear of heights in Bologna 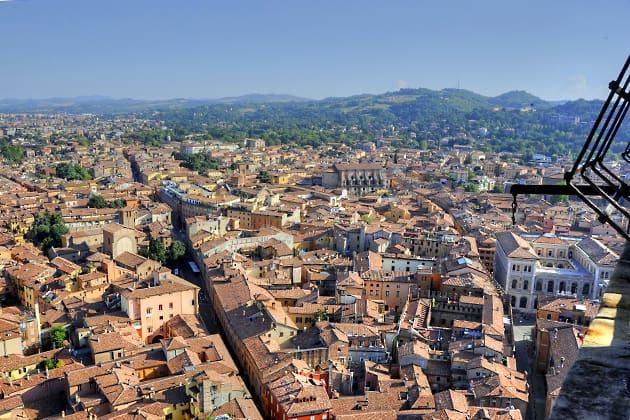 I have so many wonderful things I want to share with you from my recent stay in Bologna and thousands of photographs that it was hard to know where to start. So let’s start from the top! The top of the tallest tower in Bologna, the Asinelli Tower – that’s 318 feet or 97.2 metres high. Just one catch, I’m scared of heights…. and stairs!

This wasn’t something I was initially planning to do as I get terrible vertigo. Going up a step-ladder I get dizzy. What’s more I have a fear of stairs! I know! Nuts!! I actually have nightmares about stairs, sections being missing, with gaping chasms beneath me and having to do gymnastic maneuvers to get to where I want to go and I assure you, I’m no gymnast.

In the late 12th Century there were over one hundred towers in Bologna but today only twenty have survived the ravages of fire, warfare and lightning. Together the Asinelli Tower with its neighbouring, smaller 47 metre high, Garisenda Tower, make the two towers symbol of the town, also known as the kissing towers as they lean towards each other.

The Asinelli Tower has 498 steps, however, despite my fear of heights and stairs, I also like a challenge and as I wondered around Bologna over a couple of days the tower was calling me. I felt it literally pulling me towards it and a longing to climb it came over me, just to see if I could.

The entrance to the tower isn’t very inviting and it is just as well I don’t suffer from claustrophobia.

Oh my! How are these stairs held up? How long have they been here? What if there was a fire?

This tower was actually built in 1109 but the inner staircase wasn’t added until 1684.

Strangely enough it was only when I was half way I up I remembered the nightmares.

Going up was one thing but what about coming down again?

Above, the view from the only window I noticed on the way up.

Below, the view from the top!

I climbed the tower in the afternoon so the above shot was taken shooting into the sun. I would suggest climbing in the morning as this is possibly the best view across Piazza Maggiore, Basilica di San Petronio and, in the distance, the Sanctuary of the Madonna of San Luca perched on the hill.

It was a lovely surprise when I reached the top to find one of my fellow #Blogville bloggers already there, Rachelle from The Travel Bite.

When it was time to go down again, I was rather nervous. I’m ashamed to say quite a few expletives left my lips as I hurried down the stairs at a rate of knots, longing for it to be over.

When I reached the ground my legs wouldn’t stop shaking . We felt a little reward was in order. My first, but not my last, Spritz of the week – a popular aperitif in Emilia-Romagna made of Aperol, sparkling white wine and soda.
Spot on!