Top 15 things to do in Athens, Greece 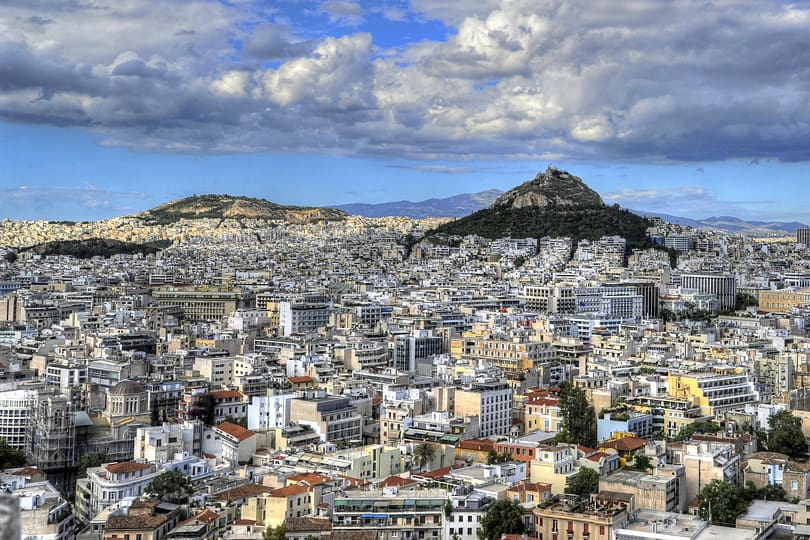 What do you see when you visit a city like Athens?

The grime and dirt, the scrawling graffiti, the homeless man with his bedding spread out in a shop doorway?

Or do you see the pretty lilac-coloured flowers of the jacaranda trees that line the avenues, the lively bars and charming restaurants, the colourful street art that brings the city to life, juxtaposed against a backdrop of ancient ruins standing sentinel, looking out across the sprawling city below?

Having visited Greece a number of times as a young adult, I have many happy memories from tasting Greek food for the first time to learning to snorkel in crystal clear waters to visiting magical archaeological sites such as Mycenae, Epidaurus and Knossos – all a long, long time ago.

For some time now I had been yearning to go back and rediscover Greece so when I was invited to Athens I leapt at the chance. It was clear that while the country may still be reeling from the debt crisis, their tourism industry remains unaffected and numerous young entrepreneurs are taking the initiative, starting up travel-related businesses aligned to the digital era.

Here’s a round-up of the highlights from my trip to Athens, much of which was enabled by these digital travel companies run by creative young Athenians, eager to show off Athens to its full potential.

Things to do in Athens

Grab a comfy pair of walking shoes and hit the streets of Athens. There’s no end of places to explore, fabulous sights to see and enticing things to do.

The first thing you notice when you arrive in Athens is the graffiti. It is everywhere and rather than fight it, Athens has embraced it wholeheartedly to become a living, breathing art gallery.

Manos, from Dopios, an Athens based company that specialises in introducing travellers to locals in over 80 countries, took us on a colourful walking tour of the street art of Athens.

Did you know that you can drive from the centre of Athens to the beach in just 15 minutes? We spent a wonderful day at YaBanaki Beach, a private beach a little further out of town. The water was chilly so early in the season but it was crystal clear and so inviting that I just had to go in …twice.

We learnt the art of tsipouro tasting with Athens Insiders, founded by a group of avid travellers, offering tailor-made authentic experiences showing you Athens through the eyes of locals.

The traditional spirit, Tsipouro is an un-aged brandy reputedly first made by Greek Orthodox monks in the 14th century on Mount Athos in Macedonia, Greece. Ideally, it should be served straight from the freezer, in a shot glass, with a few mezze dishes. It can be served neat, diluted with water or with a few chunks of ice. It also makes an excellent hot beverage in winter.

The Museum of Greek Gastronomy

We were really lucky to be shown around the new Gastronomy Museum. As well as seeing the first exhibition, we also had a wonderful meal in their lovely courtyard restaurant. I’m looking forward to telling you more about this and all the other scrumptious delights I enjoyed during my stay, a welcome reminder of just how good Greek cooking really is.

A visit to Athens wouldn’t be complete without taking a look around the museum at the Acropolis, a UNESCO World Heritage Site and then wandering around the ancient ruins themselves. I’d been here once before, over 25 years ago, and I had forgotten just how stunning the views of the city are from here.

More things to do in Athens

Athens may be looking a little down on its heels but if you take the time to peel back the layers you’ll discover a vibrant, creative, eclectic city. The ancient and the modern stand hand-in-hand here and a movement of young Athenians whom, having lived or studied abroad, have now returned to play their part in rebuilding the city they so clearly love.

Athens is a city that takes a little time to get to know and I’m eager for us to get better acquainted.

I visited Athens as a guest of Marketing Greece, a privately funded, non-profit corporation, formed to promote Greek Tourism. My travel, accommodation and meals were complimentary.

For more information on Athens check out their website DiscoverGreece.com

My thanks to Marketing Greece, Aegean Airlines (especially for the impromptu wine tasting mid-flight), Yabanaki Beach and Pallas Athena, part of the Grecotel Hotel & Resort group.