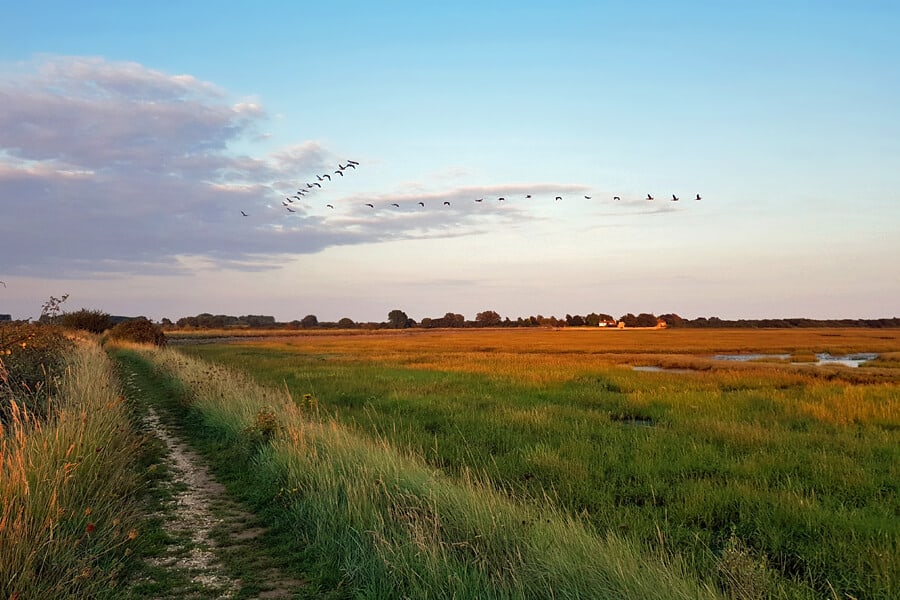 Each autumn across the English countryside, there’s a soft light that’s particularly lovely early in the morning or late in the afternoon, casting long shadows and an ethereal glow across the landscape. One of my favourite places to enjoy autumn walks in this ‘golden hour’ is around Pagham Harbour in West Sussex, just a ten-minute drive from my home. You won’t find any boats in this harbour though. They are long gone. It’s now a tranquil bird reserve.

As the sun sinks low in the sky it bathes the harbour in a golden pink light and the white feathers of the swans and little egrets searching for fish turn a beautiful pastel pink. The hedgerows that line the harbour wall are a riot of colour too, overflowing with haw hips, blackberries and sloes. Autumn is a wonderful time of year to visit Pagham Harbour. 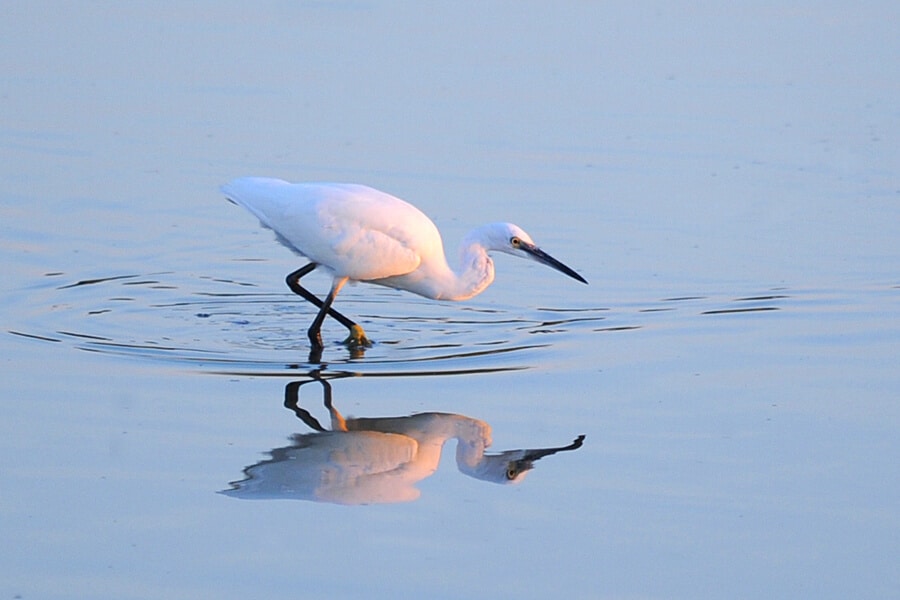 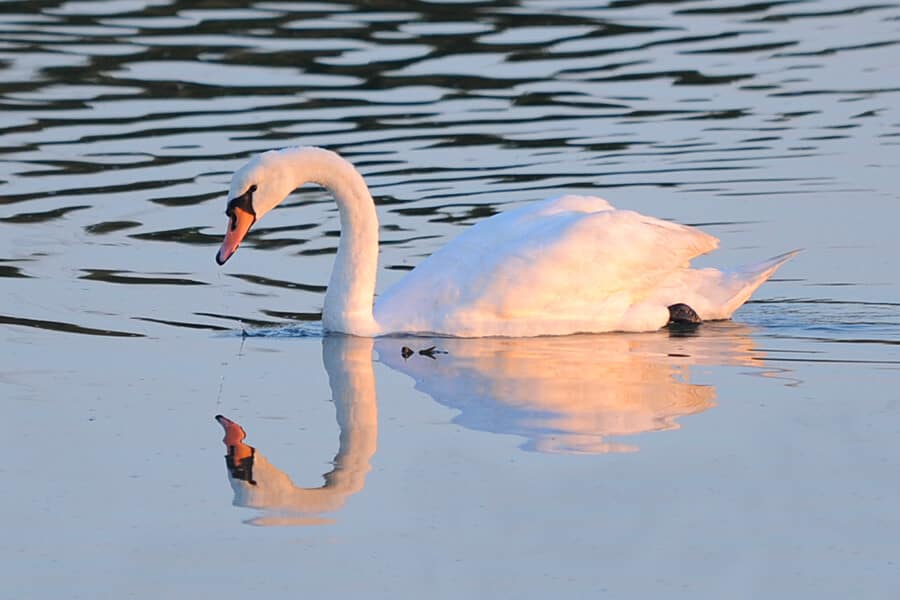 The harbour is an RSPB (Royal Society for the Protection of Birds) nature reserve. There’s no entrance fee although you can make a donation.

At low tide, wading birds such as the black-tailed godwit can be seen on the salt marshes. These are mainly winter visitors who spend their summers in Iceland and winters in the UK. Other birds to see include mute swans and a little egret, both of which can be found here year-round, although the numbers of the latter increase in the autumn and winter as more fly over from the continent. 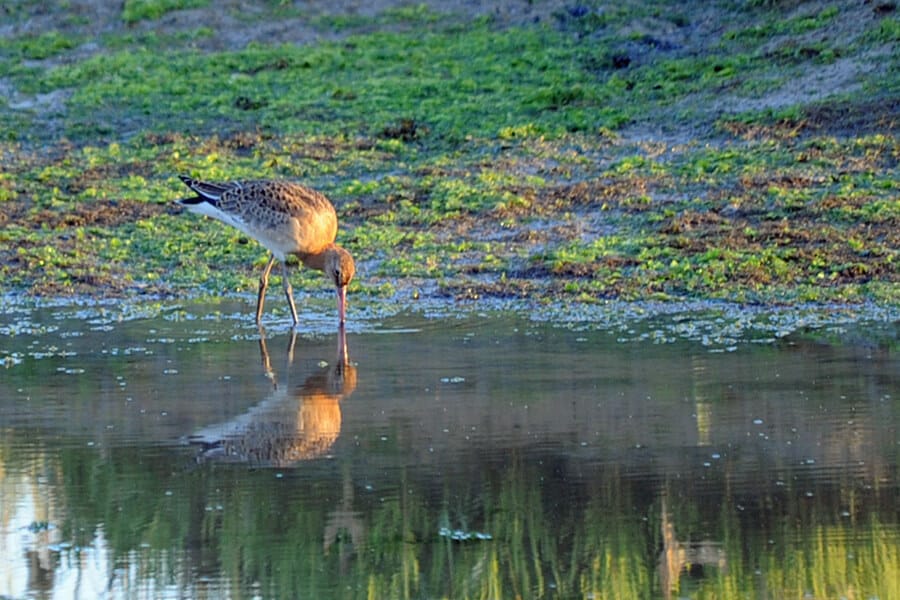 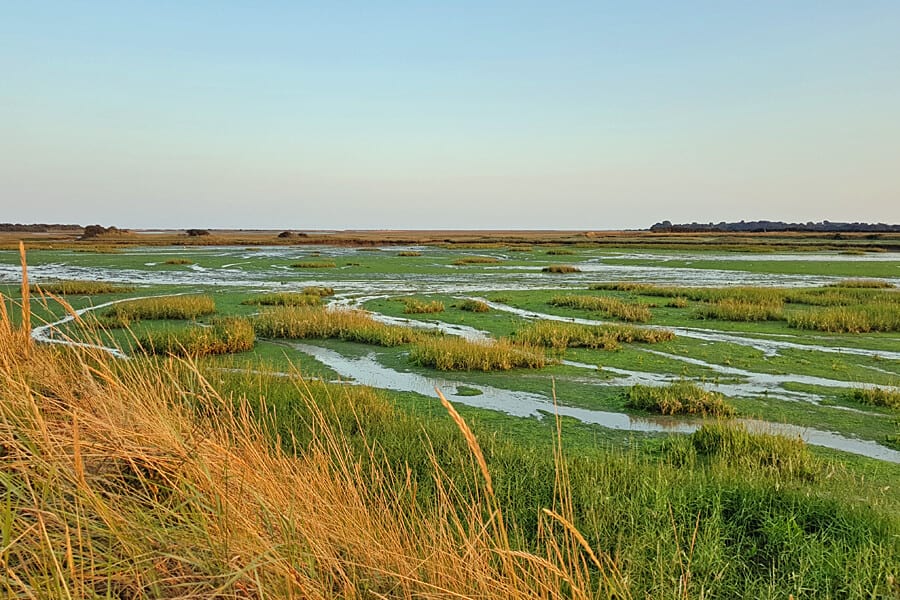 It’s worth noting that some of the footpaths that you can use at low tide (above) are submerged at high tide (below).

The villages of Pagham and Nyetimber have a number of great places for a drink or a bite to eat including The Lamb Inn, a 17th-century pub with a good restaurant that’s a one-mile walk from the Church Lane entrance to the reserve. I also love the Little London Tea Shop just up the road from The Lamb, which has a very reasonably priced menu and is open in the mornings and early afternoons. And for Sunday lunch, it has to be the Inglenook just across the road.

On the other side of the harbour lies the village of Sidlesham. It’s here that you’ll find the Pagham Harbour Local Nature Reserve car park, visitor centre and toilet facilities, open from 10 am to 4 pm.

Sidlesham is also home to the well-known 16th century Crab and Lobster, pub-now-restaurant with rooms. While still a pub it used to be a favourite haunt for walkers but, some time ago now, it went more upmarket. There’s only restaurant seating inside but there’s a lovely little garden around the back.

As well as the few rooms in the pub itself, you can also rent a self-catering cottage with two double rooms. They’re all tastefully furnished and look very comfortable. While I’ve never stayed here or eaten in the restaurant, I can assure you that they do an excellent cup of coffee and cake for around £5. I should imagine it’s the perfect place for a romantic escape for nature lovers and it’s just a short drive to the lovely cathedral city of Chichester and many more historic West Sussex villages. And, of course, Pagham Harbour RSPB Nature Reserve is right on your doorstep.

Check current prices and availability for accommodation in Pagham, and nearby Bognor Regis and Chichester. 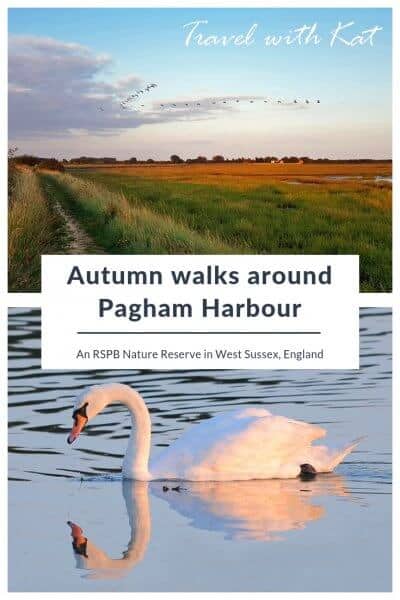 While on holiday in Egypt in 2013, when I heard that you could swim with dolphins in Sharm el Sheikh...