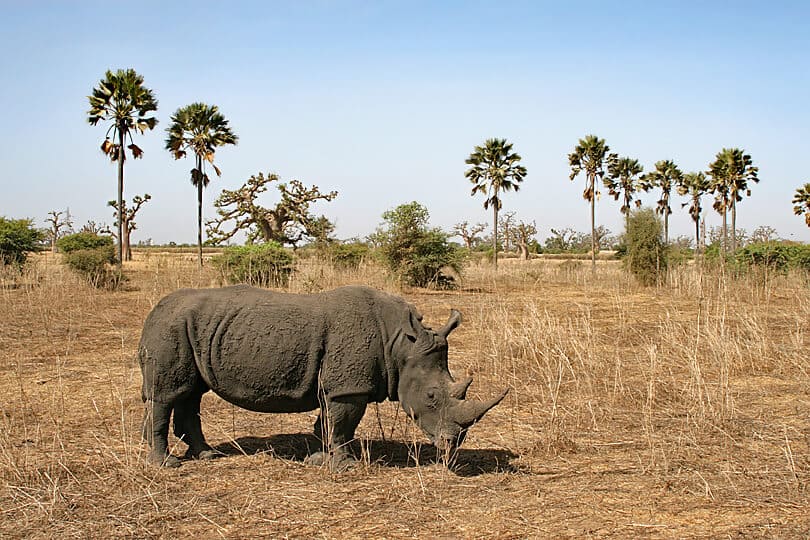 For as long as I can remember I have had a keen interest in animals, both wild and domestic, in fact, although I now work as a graphic designer and photographer my main subject at University in Bristol was Zoology and one of the first jobs I’d ever had was in a zoo. You can imagine my delight when, with just three days notice, I was asked if I’d like to visit Senegal to photograph some new hotels. The visit would also include a mini-safari to Bandia Wildlife Reserve (Reserve de Bandia), near the coastal resort of Saly. Before I knew it, my bags are packed, I’ve got my malaria tablets and I’m on my way.

I was only in Senegal for three days but we did so much, visiting many hotels, the beautiful Sine Saloum Delta, Gorée Island, craft markets, a fishing village and, of course, Bandia.

One of the highlights was the chance to see these wonderful creatures up close. “Could that rhino turn this truck over?” I said as he (or it could have been a she) stood just a few feet away serenely posing for my camera. “Yes” was the answer from our guide.

The fenced reserve is set on 3,500 hectares of natural habitat. It’s an excellent place for photographing the animals amongst the giant baobab trees, palms and scrub. Many of the animals were extinct in Senegal until reintroduced by Bandia and Fathala Wildlife Reserves. Fathala is further south in the Sine Saloum Delta, very near The Gambia border.

My favourite animals we saw that day were the giraffes. We were allowed to get out of the truck and move closer to the family of three – a little shyer than the rhino but never the less a close encounter. A family of ostriches were also delightful – the father on constant guard of his mate, youngster and four little ones. The males can be quite aggressive so we photographed them from the truck.

Antelopes, impalla gazelles, buffalo, monkeys, giant tortoises and crocodiles were all caught on camera but sadly the herd of zebra in the park proved too elusive. We did not even catch a glimpse of a black and white stripe. I guess I’ll just have to return someday!

How to get to Bandia Wildlife Reserve

The reserve is off the N1Dakar-Mbour road between Sindia and Nguékokh. It is just15km from the tourist resort of Saly, 18km from Mbour and It is 64km from Dakar, Senegal’s capital.

I visited Senegal on a photographic assignment for The Senegal Experience.