Where and what to eat and drink in Saint John, New Brunswick 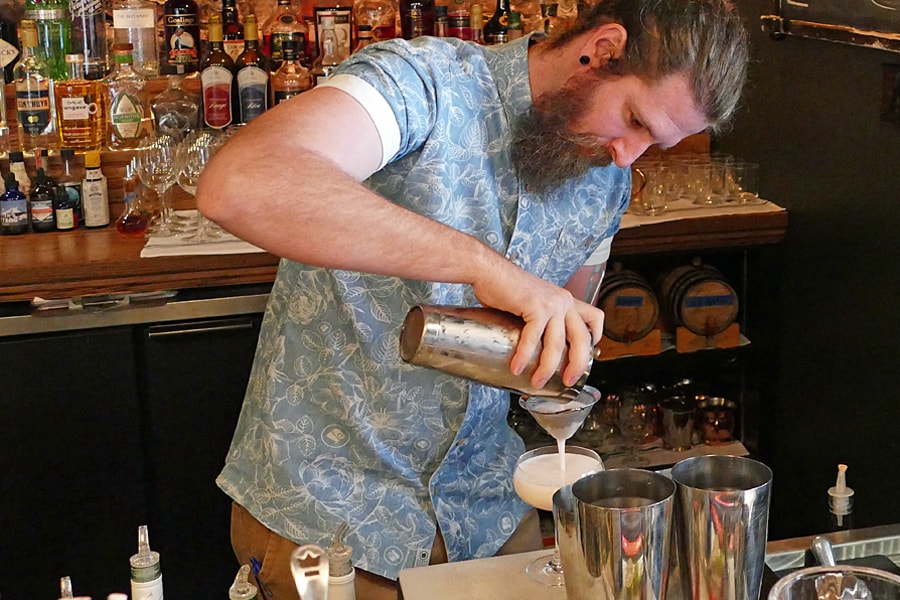 When I visited Saint John earlier this year I had no idea what a gastronomic treat I was in for. As I expected, I found fresh and tasty seafood, but I also discovered delicious curries, excellent craft beers and ciders, and melt-in-the-mouth desserts. I left Canada with no doubt that Saint John’s food scene is flourishing and on the up.

Possibly the dish most associated with the Maritimes is the lobster roll, and I’ve two great suggestions here of where you should eat these. Dulse, a seaweed I first came across in Northern Ireland, also grows along the coast of New Brunswick and Nova Scotia, and is eaten dried as a snack or in a sandwich (or a bagel in Slocum and Ferris). British dishes, such as bangers and mash and fish and chips, are also popular.

Saint John, however, isn’t just about the traditional. There are some fabulous restaurants, such as Port City Royal, putting a new spin on old dishes. And, at Queen’s Square Farmers’ Market, I found cuisines as ethnically diverse as the people of Saint John, with food stalls from Nigeria, Cameroon, Thailand, Mexico, Haiti and Syria.

Take this article with you including the GPS locations of all the key sights with the GPSMyCity App.

Here are my highlights from a scrumptious week in Saint John.

My Favourite Things to Eat and Drink in Saint John

In an atmospheric setting of exposed brickwork, wooden beams and open fireplaces, Thandi has taken the Saint John food scene by storm with its classic Indian cuisine. I can vouch for the deliciousness of its most popular dish, Butter Chicken – a boneless chicken with cashew nuts simmered in a mild and creamy curry sauce. While specialising in Indian cuisine, they also offer excellent international dishes including a superb Pad Thai and great steaks, I’m told. I’d love the opportunity to return here to try something else from their menu. Mind you, I enjoyed the Butter Chicken so much I think I would find it hard not to order it again.

A fabulous place for lunch near the top of King Street, this popular restaurant serves really tasty food. Grab a seat at the communal table if you wish to strike up a conversation with the locals. (And why wouldn’t you?) You’ll need to reserve a table if you want to be sure to get in, though. All the food I tried here was excellent, including a delicious carrot cake. However, when I had a taste of the Lemon Sour Cream Pie, I had serious food envy – a dessert to die for! 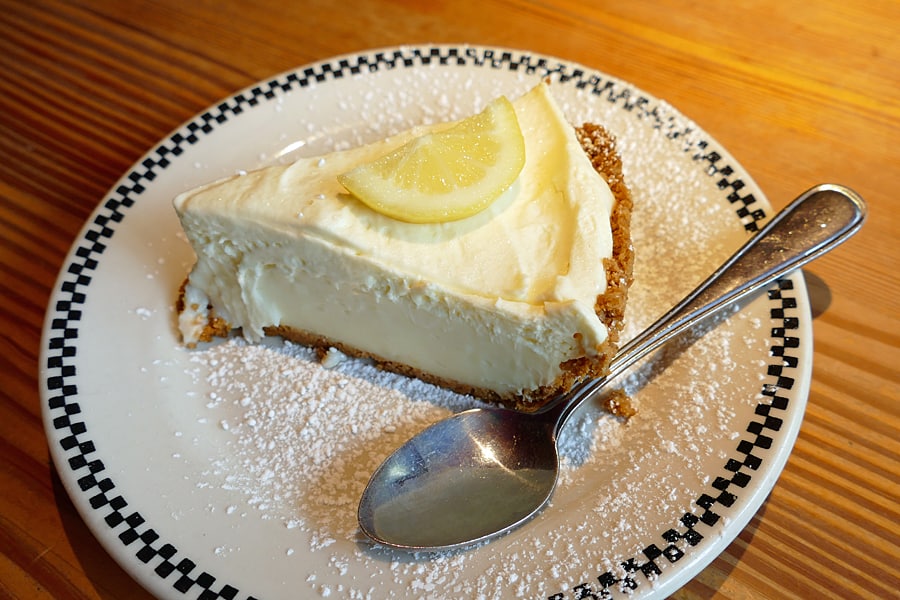 A Bagel at Slocum & Ferris

One of the oldest businesses in Canada dating back to 1895, Slocum and Ferris is a popular casual eatery in the heart of Saint John City Market. I popped by one morning and tucked into a satisfying bagel with scrambled eggs and smoked salmon, topped off with a portion of the salty seaweed dulse with diced potatoes on the side. 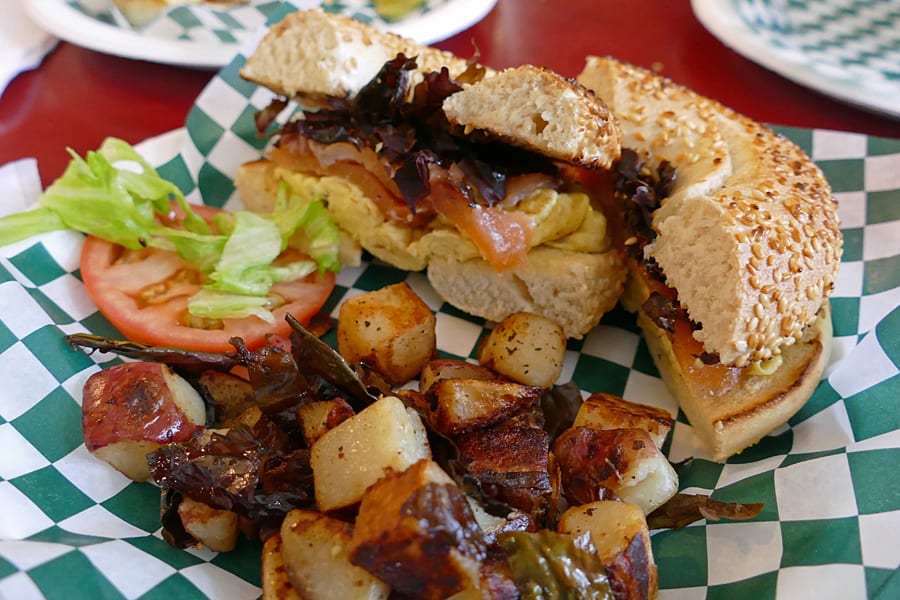 I didn’t have the chance to try one but the homemade burgers are reputedly a strong contender for the best burger in Saint John. If you’ve tried one, please do let me know whether you agree.

Succulent scallops wrapped in crispy bacon with maple syrup – just the thought of these makes my mouth water. Tasting the city’s seafood was one of my Top Ten Things to Do in Saint John, but it was these scallops by Chef Jesse Vergen (as seen on Top Chef Canada All-Stars) that stole the show for me. I’ve also read that their lobster rolls are not only delicious but seriously huge – so, again, do let me know if you have tried them and what you thought. 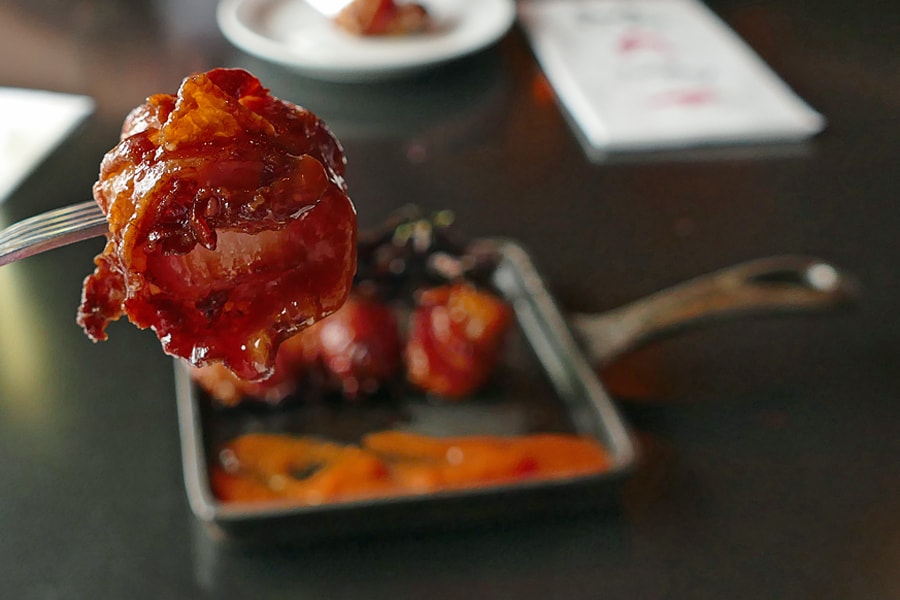 JavaMoose first opened in Saint John in 1996 on a quest to provide the best coffee the world has to offer. They can now be found in some 14 locations around the city, including Saint John City Market. They continue to offer great coffee made from quality Arabica beans, grown by farmers who care about their land and their product. The beans are then expertly roasted by JavaMoose. Is this the best coffee in town? I think so.

Visit their website to see all their locations and opening hours, Java Moose.

When I asked locals where to go for the best New Brunswick beer, the name on everyone’s lips was Picaroons. The original brewery opened in Fredericton, brewing traditional British-style ales. This was followed last year by the opening of Picaroons General Store in Uptown Saint John, which includes a brewery, taproom and retail store selling everything from beard oil to branded t-shirts. You’ll also find their beer served in many of the local restaurants such as Grannan’s shown below where I had a great lunch. 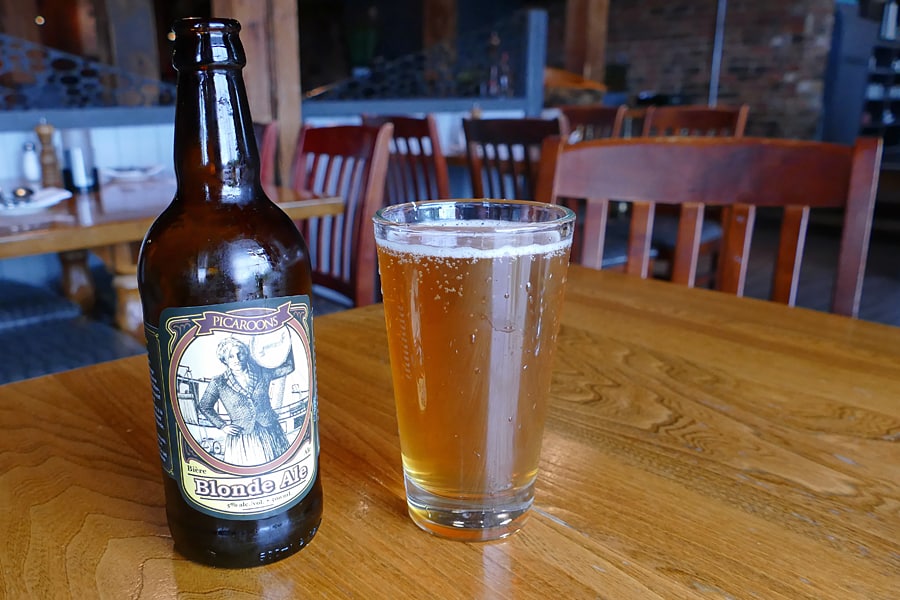 There are two more excellent microbreweries that, together with Picaroons, make a wonderful brewery crawl, which is another one of my Top Ten Things to Do in Saint John – so check out that post if you’d like to know more about the city’s breweries.

With an open kitchen, exposed brickwork (a common theme throughout Uptown Saint John) and industrial shabby chic styling, there’s a casual atmospheric ambience at Port City Royal. And it’s the perfect setting for a ‘Tickled Pink’, an original creation by the bushy-bearded bartender, Eric, a true cocktail aficionado. It’s made with the local vodka Snow Fox along with Aperol, lychee liqueur, homemade rhubarb syrup, fresh lemon and egg white for a creamy, velvety texture – a delightfully refreshing combination. 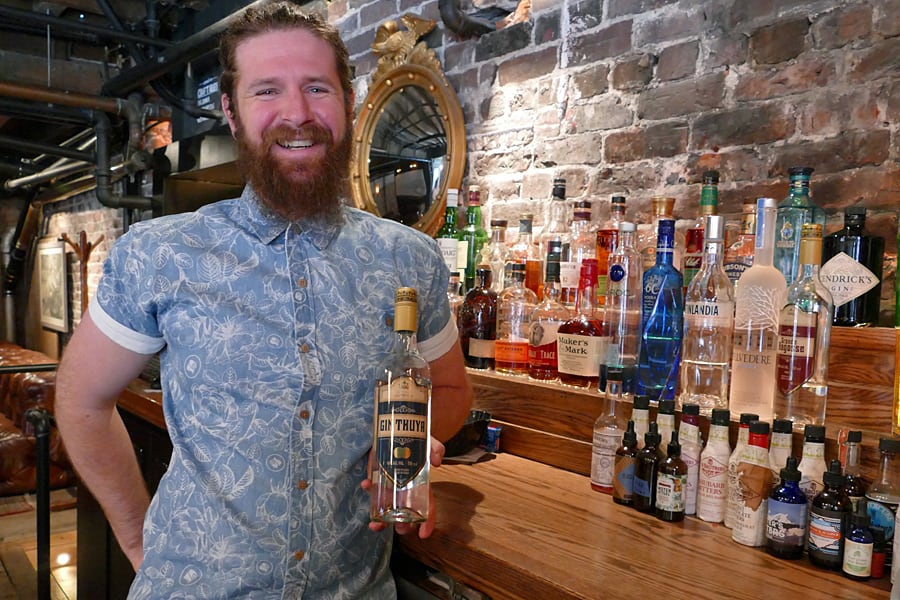 Port City Royal is also the place to come to try Donair, a Canadian dish rarely found outside of the Maritimes. It was created in the 70s by migrant Peter Gamoulakos, who having failed to sell traditional gyros, adapted the dish to local tastes by substituting beef for lamb and adding a sweet sauce, now known as Donair sauce.

Snacks are served all day. Check out their website for restaurant opening times, Port City Royal.

Take this article with you including the GPS locations of all the key sights with the GPSMyCity App.

Held every Sunday throughout the summer, this is a great place to visit to get to know the community of Saint John. There’s plenty of edible and drinkable delights here to tempt you, but my favourite find was Red Rover Cider from Fredericton in New Brunswick. I especially loved their Fire Cider, with fresh ginger and a touch of cayenne pepper, which can be served hot or cold. 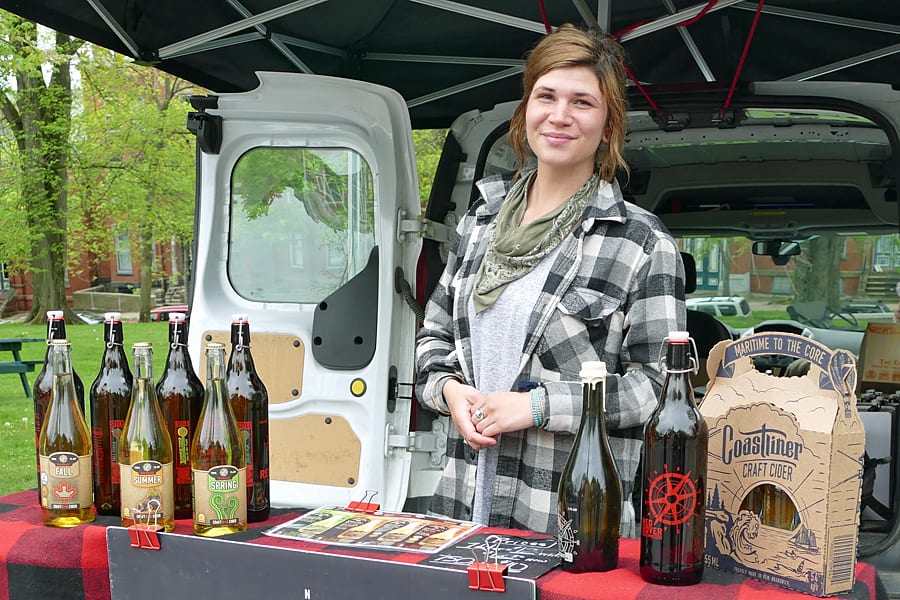 The homemade lemonade from Tall Tom’s was also excellent and extremely refreshing on a sunny Sunday morning. I saved the cider for a little later in the day.

This is THE place to go for live lobsters, cooked lobsters, lobster rolls, clams, periwinkles, scallops and smoked salmon. You’ll find ‘Lobster Lady’ Karen’s shop about a 15-minute drive from Saint John along the coastal road. 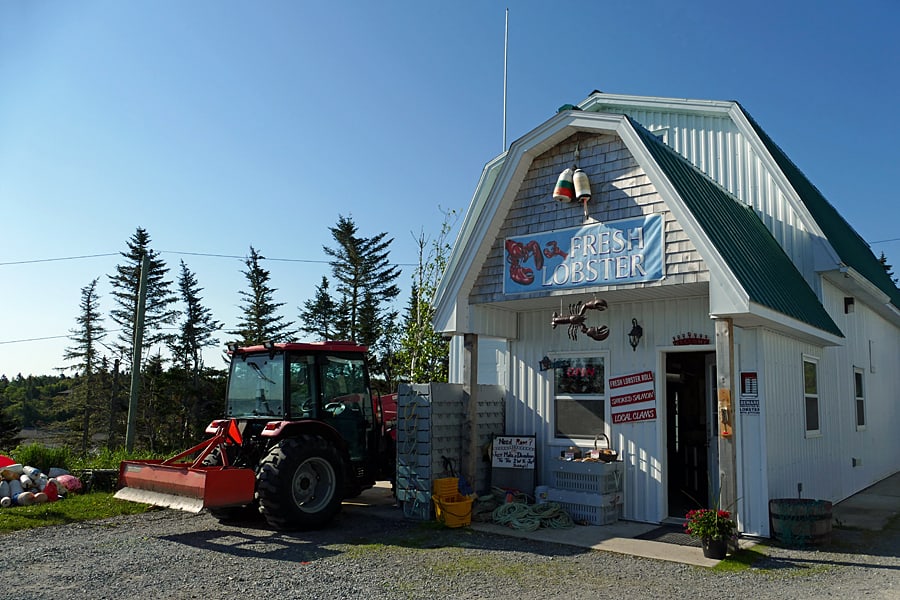 You’ll also find some interesting local arts and crafts being sold for local charities. Last year, they raised over $12,000 for a hospice – another great reason to support this shop.

Sadly, the shop is now closed for the season but will open again each May, June and July and in November and December.

I visited Port City Royal and Picaroons, as well as some other great places, while on an excellent walking tour with Uncorked Tours, which I’d highly recommend. Their tours are not only great fun but offer a fabulous introduction to the Saint John food and drink scene as well as an insight into the local community and culture. Our tour ended with an excellent beer flight and a good natter at Big Tide Brewing a down to earth gastro brewpub which gives Picaroons a good run for their money. 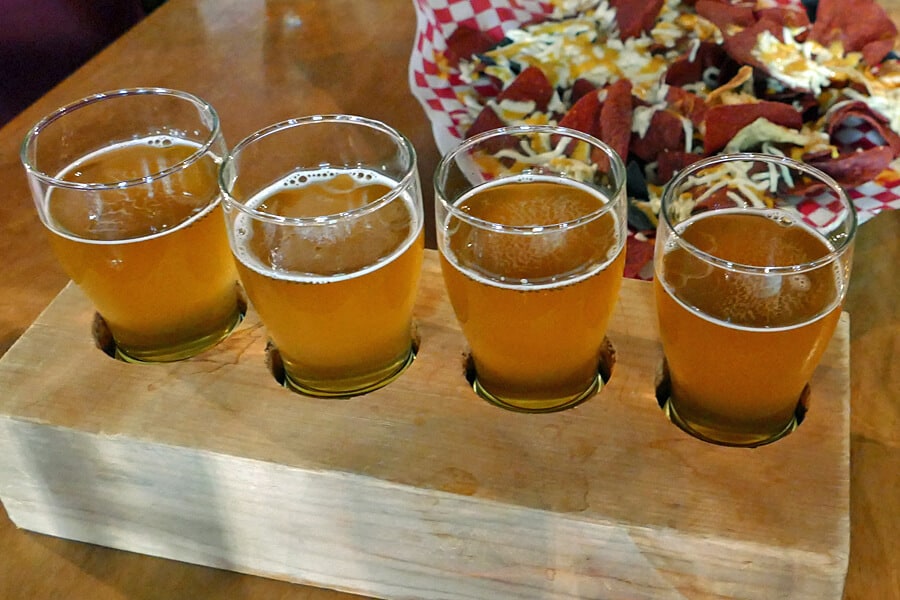 Have you visited Saint John, or perhaps you are lucky enough to live here? Where are your favourite places to eat and drink, and what is your favourite food or tipple?

You can now receive monthly updates from Travel With Kat. 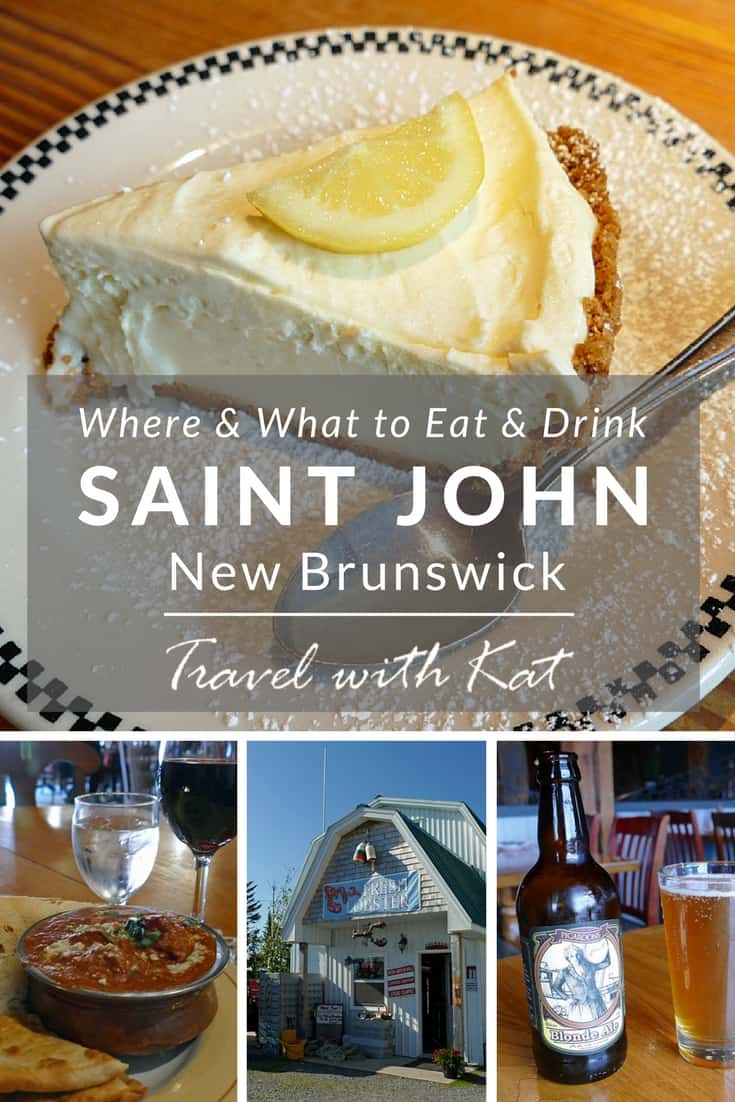 Visit Canada Keep Exploring to discover more about where to go and what to do in New Brunswick.

Disclosure: Thank you to Air Transat, Destination Canada, New Brunswick Tourism and Discover Saint John for sponsoring this visit to Canada. As always, I retain the right to write whatever I wish and will always give you my honest opinion.