A little after sunset the sky turns a deep dark blue, the lights of the bars and restaurants around the harbour shine brightly against the darkening sky. It’s a fabulous, atmospheric time to take photos on your travels. Here are my tips on blue hour photography, including capturing lights trails and using motion blur.

It varies depending on where you are in the world and the time of year but, sometime after sunset there’s about a short window when the light is just right for blue hour photograhy – when it’s dark enough for the lights to show up but there’s still enough light in the sky to make an interesting picture. In southern Europe, this tends to be about half an hour after sunset and it may only last about ten minutes or so. Nearer the equator, the light changes more quickly.

Known as the blue hour, it is the period of twilight, both in the morning and the evening when the sun is below the horizon but still throwing light into the sky. The shade of blue is completely different from the blue skies we might see on a clear day. The effect is a lovely soft light, a deep blue sky and if artificially lights are present such as in a city view they show up beautifully against the dark blue in the sky. Add in the reflections of the lights in the water and you can have the makings of a wonderful shot.

Calvi ,on the island of Corsica (pictured above and below) is a wonderful town in La Balagne region of Corsica and the evening is a great time to photograph the marina with the 500-year-old citadel lit up in the background. A little later in the evening (or earlier in the morning), the sky will be much darker and the buildings (and in this case boats) will disappear in the darkness making a far less interesting picture.

The image above was taken a little late in the evening when the best of the blue hour had passed. If I had arrived a little earlier the definition and exposure might have been better.
The picture below of Venice was taken just after sunset. If I could have stayed a little longer, I would have waited until it was just a little darker to see if I could capture a more dramatic image. 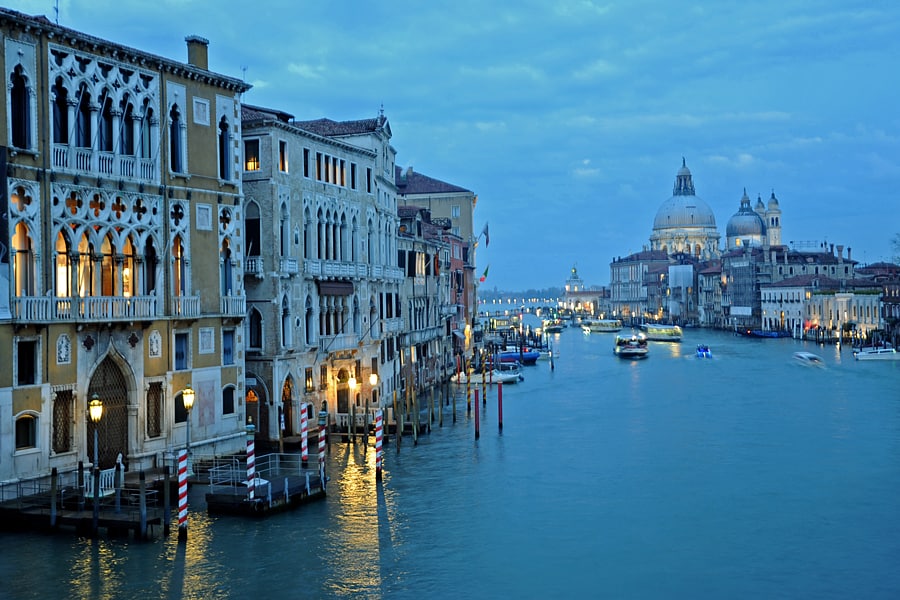 If you have a camera with semi-manual settings, put the camera on a tripod, set it to aperture priority and close the aperture right down. The camera will work out the length of exposure for you. It could be anything from a couple of seconds to about twenty seconds or even longer. To avoid camera shake use a shutter release cable or put your camera on a timer so that you don’t jolt it when you take the picture.

Anything moving will be blurry or in extreme cases not show up at all. If someone walks quickly through your shot with a bit of luck they won’t appear in the photo. Any cars driving past will form interesting light trails.

Don’t be tempted to set the ISO too fast as the image will become grainer the higher you set it. Using a tripod enables you to keep the ISO low.

If you don’t have a tripod you may find that your phone takes a better shot than your camera, although if there isn’t enough light it will be very grainy. Experiment though and see how your camera and your phone cope with different amounts of light.

When photographing a moving object it is usual to use a fast shutter speed to freeze the action and to give a sharp clear image, however, sometimes lovely effects can be created by using a slower shutter speed. Photographs of dancing, for instance, lend themselves to this, as a bit of blurring movement in an otherwise sharp image can create more atmosphere. Moving water can also create lovely images with a slow shutter speed, often used to great effect with seascapes and river shots, where the moving water is blurred to create a misty, almost ethereal image. Here you can see a fairly subtle example of this around the rocks in the foreground.

When using a really long exposure anything moving will be blurry or in extreme cases not show up at all. If someone walks quickly through your shot with a bit of luck they won’t appear in the photo. In the image below the masts of the boats are blurry as they gently bob in the water.

Read more  of my photography tips.

Any cars driving past when you are using a long exposure at night will form interesting light trails such as those formed by these buses and cars in the image below in London long after the blue hour had passed.