Celebrating Christmas around the World 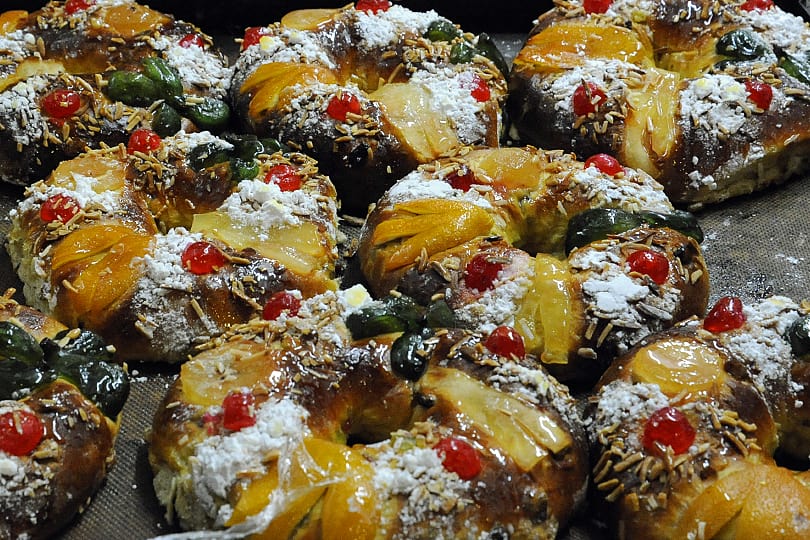 My Christmas in England

Every 25th December my family come together for the most important meal of the year, Christmas Day lunch. I cook a roast turkey with roast potatoes and parsnips, sausages wrapped in bacon and of course, sprouts, cranberry sauce, sage and onion stuffing and lashings of gravy (thick gravy, none of that wishy-washy stuff please). Those are the essentials here in England but I also serve some gammon and sweetcorn, sometimes carrots and some honey roasted vegetables too. Once we’ve all eaten more than we should, the lights are dimmed and in comes a traditional Christmas pudding, covered in flaming brandy, served with cream AND brandy butter. And we eat some more. Then we all collapse on the sofa or even the floor and exchange presents. 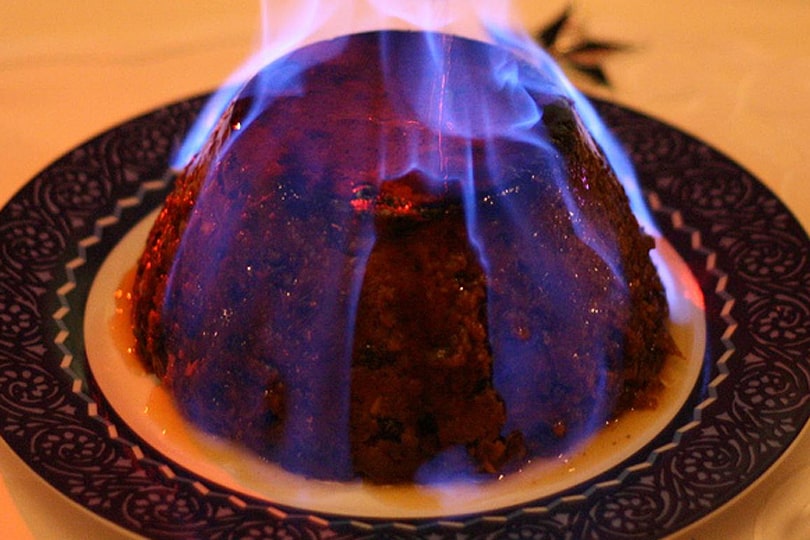 above: by Simon Pearson

This year though I decided to take Christmas off.

I had a lie in, watched a film, and did some last-minute present wrapping before walking around the corner to one of my favourite local restaurants, Papryka, where we had our Christmas lunch. On the menu….

Borsch, kraut and mushroom dumplings… hang on a minute, that doesn’t sound right.

While I do love trying food from other countries for me it really wouldn’t be Christmas without the turkey and roast potatoes and at Papryka they were serving both a traditional Polish and an English Christmas menu. Three courses, for just £18 and very good it was too.

Christmas food around the world

Curious to know how different people celebrate Christmas I asked a few friends what they traditionally eat and wanting to know more about a Polish Christmas I started with Agness.

Agness from eTramping gave me a lovely insight into her traditional Polish Christmas.

Christmas in Poland is a very special holiday for everyone. As a Catholic country, we do make sure to spend it with the loved ones as well as go to the church and pray. Oh, I nearly forgot! We also eat a lot and sometimes… drink. 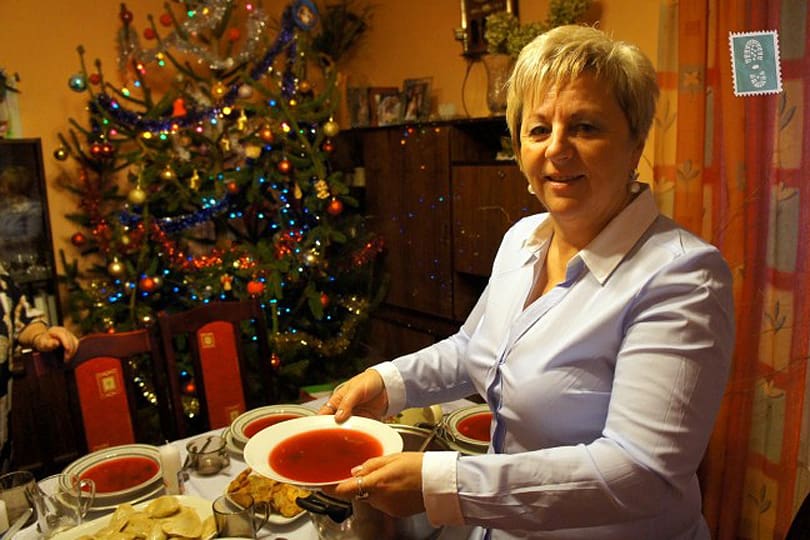 above: Agness’ mum serves up barszcz

Polish people love cooking and baking for Christmas as we believe this brings people together. We keep one seat for somebody unknown at the supper table because we strongly believe that no one should be left alone at Christmas. On 24th, 25th and 26th December no visiting, cleaning, nor cooking are allowed. Previously cooked food is heated. This is a day of enjoyment, for Jesus was born. We sing songs together, eat a lot of food and chat with each other. The supper, which includes many traditional dishes and desserts, can sometimes last for over two hours. The top Christmas dishes that must be put on Christmas table in Poland are barszcz (a beetroot soup served with ceps raviolis), Makowiec (a poppy seed pastry) and of course traditional Polish pierogi (half-circular dumplings stuffed with cabbage or sauerkraut and dried forest mushrooms). We eat a lot of oranges and mandarins, drink fizzy drinks (Christmas coke) and you can also have a few shots of vodka with best friends and family!

Simon from Wild about Travel shares an Italian Christmas.

The food treat that means Christmas to everyone in Italy is Panettone, the traditional sweet bread loaf filled with raisins and candied orange and lemon. Originally from Milan, from the early 20th century Panettone became popular across the country and is served on most tables as a typical dessert of the Christmas season. There are many industrial brands but the best Panettone is the one prepared in small bakeries or ‘pasticcerie’, following the ancient method. 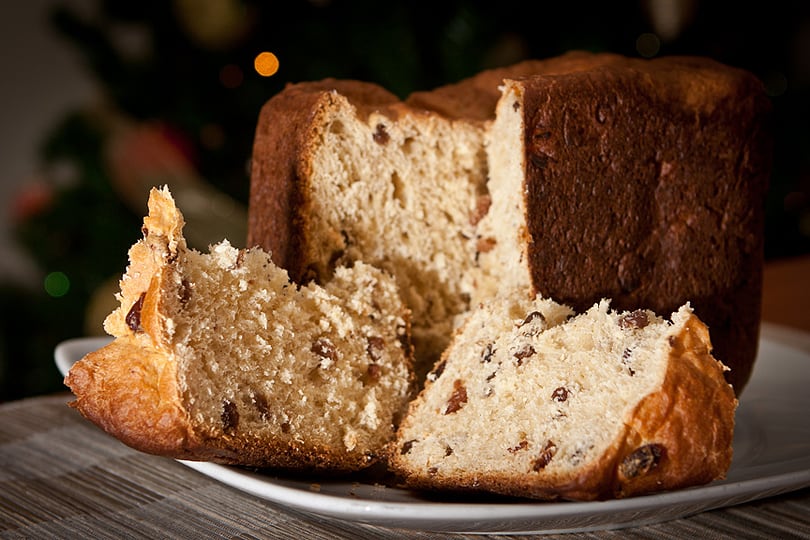 Many families, especially in the South, use to eat fish on Christmas’ Eve as a religious tradition, and do the same the day before Easter.
Christmas menus vary from region to region but no matter the custom, they have something in common: many dishes and fine ingredients. Until recently, Italy was a poor country and Christmas one of the few occasions for a treat, with delicacies that would have been unimaginable during the year.

Ana from Mrs O Around the World shares the traditions of Portugal at Christmas.

In Portugal the most important meal is dinner on Christmas Eve, where we eat our national dish bacalhau – cod with cabbage, potatoes and chickpeas. Reasonably healthy, actually, as I have not mentioned the stars of the evening – the desserts, including Bolo Rei or King Cake.

You can read more about Ana’s typical Christmas which she spends in Portugal AND England. Find Ana on Facebook and Twitter.

Nellie from Wild Junket tells us about a traditional Spanish Christmas.

“Traditionally in Spain, Dia de Los Reyes (Three Kings Day) is more commonly celebrated than Christmas Day itself. Also known as Epiphany Day, Reyes is celebrated on the 6th January and it commemorates the arrival of the three wise men with presents for Baby Jesus. In the morning, the Spaniards celebrate by eating what is known as the Roscón de Reyes, a pastry cake shaped like a giant donut and topped with candied fruit. Roscones bought in pastry shops usually have a small figure hidden inside, either of a baby Jesus or a dry fava bean. Whoever finds the figure is crowned “king” or “queen” of the celebration, whereas whoever finds the bean has to pay for the next year’s roscón or Epiphany party.” 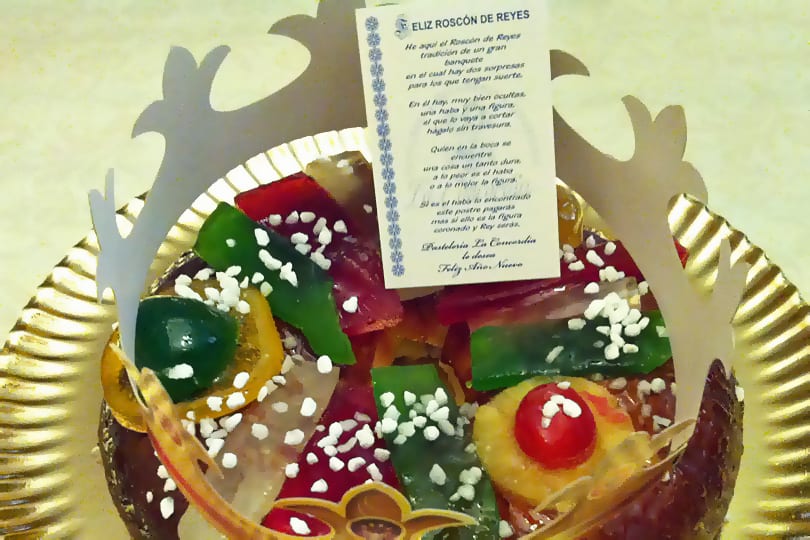 Janine Marsh, Editor at The Good Life France, tells us how they do it France.

“The big event for most French people is on Christmas Eve and a long, lingering dinner known as “Le Réveillon”. The word comes from the verb reveiller – to wake up, and refers to the symbolic awakening and meaning of Christ’s birth. It is enjoyed at home or in an all-night restaurant or café. Every region in France has its own traditional Christmas menu, and typical dishes include charpon (castrated cockerel), goose, turkey, boudin blanc (white pudding) and especially oysters.

Seafood might be strange to most of us for the Christmas meal but for many French people and particularly Parisians, oysters are an essential ingredient of the season’s dining experience.

Oysters are expensive but at this time of the year they’re big and juicy and go down a treat. Perfect as an appetizer to get Le Réveillon going and diners in the mood for lots more food.” 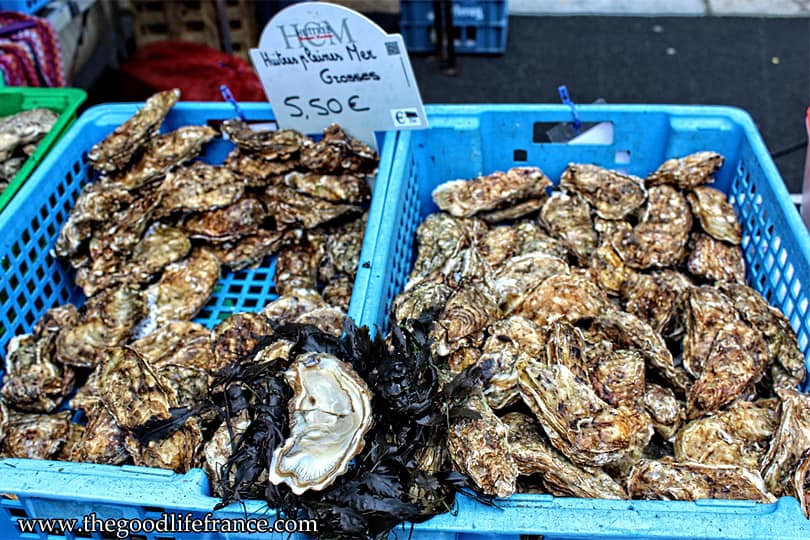 Christmas in Scotland AND France

Veronique, also from France, used to lodge with me many years ago and we’ve stayed in touch ever since. She’s part French and part Scottish and here’s how she celebrates Christmas.

“In France it is normally on the 24th that you have your Christmas meal and then you go to church at midnight. So here’s what we have, for a starter it is usually foie Gras with toast and onion jam (or fig jam or monbazillac jelly) or fresh fruits like apples and grapes or oysters. For the main course we have turkey, capon or goose with stuffing and vegetables. Followed by a cheese course with salad and a dessert of Buche de Noel, which is a Christmas log filled with butter cream and chocolate, coffee or chestnut cream or simply an ice cream Christmas log which is lighter.

In Scotland we celebrate it much the same as you do in England although perhaps in some Scottish families they have salmon or haggis but turkey is what we have in the Scottish side of my family.Being both nationalities, though, I usually do a mix up of the two.” 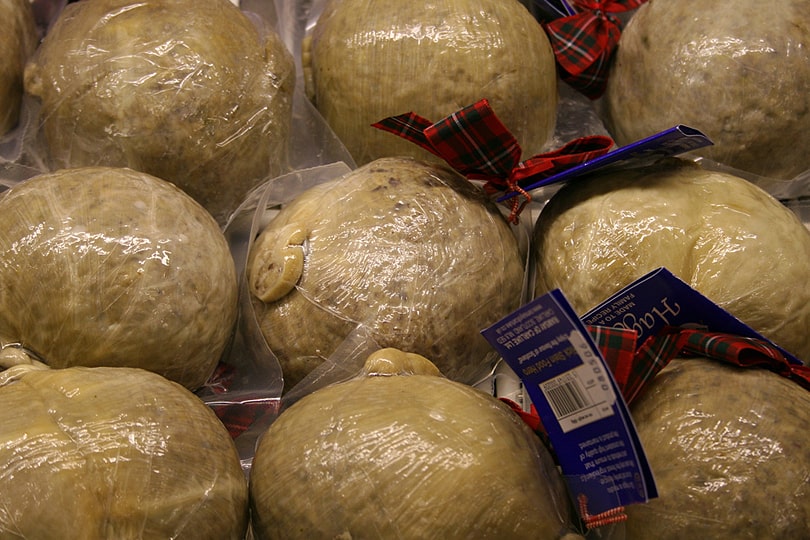 above: Haggises by Chris Brown

If you aren’t familiar with haggis, it’s a mixture of minced sheep’s heart, lungs, and liver with suet, onions, oatmeal, and seasonings that’s boiled in a bag made from stomach lining. Sounds and looks gross but tastes delicious.

Carolyn from Holidays to Europe shares an Aussie Christmas.

“In my home country of Australia, many people still follow the Christmas food traditions of our ‘mother country’, England, by eating a hot meal on Christmas Day. Despite the (usually) hot weather, my own family dines on roast lamb, potatoes and vegetables followed by plum pudding and custard.  Other variations of the traditional main meal include roast turkey or pork and basted ham.

More and more, though, Australians are changing their Christmas Day dining habits and opting for foods more suitable for our warm climate. Prawns, seafood and salads are popular choices followed by our delicious fresh summer fruits like mangoes, peaches and pineapple, or an Aussie favorite, the Pavlova.” 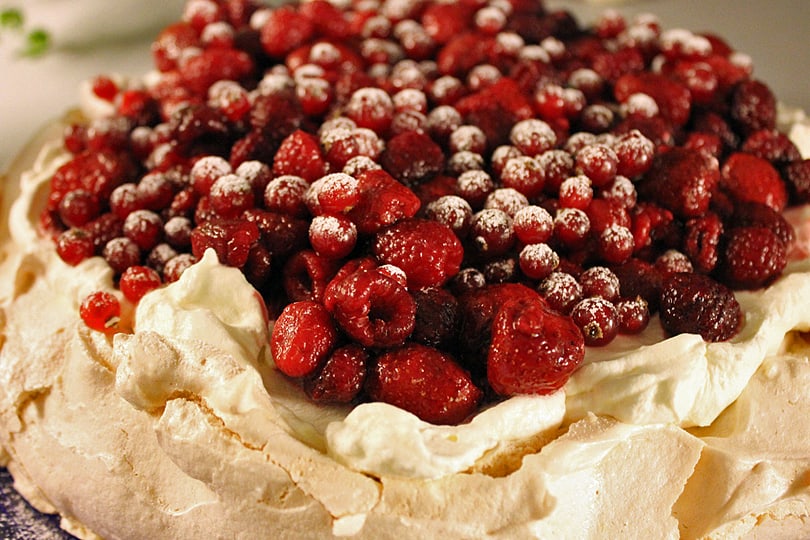 above: Pavlova by Anne-Renée Mauuarin

Christmas in the USA

“I am blessed to have my two sisters living in the New England area to share the holidays. Christmas Eve is always the big meal in our house, and I can never stray far from our traditional, fairly simple menu, as friends and family might revolt. We have a baked ham with honey glaze and lots of homemade mustards and chutneys, scalloped potatoes and this glorious salad that I love since I don’t eat meat! The vegetables are warm, as is the shallot dressing. The combination of arugula, roasted fingerling potatoes and delicata squash, with goat cheese and pomegranate seeds is so festive and colorful. How can you not think of a little HO HO HO when you see it.” 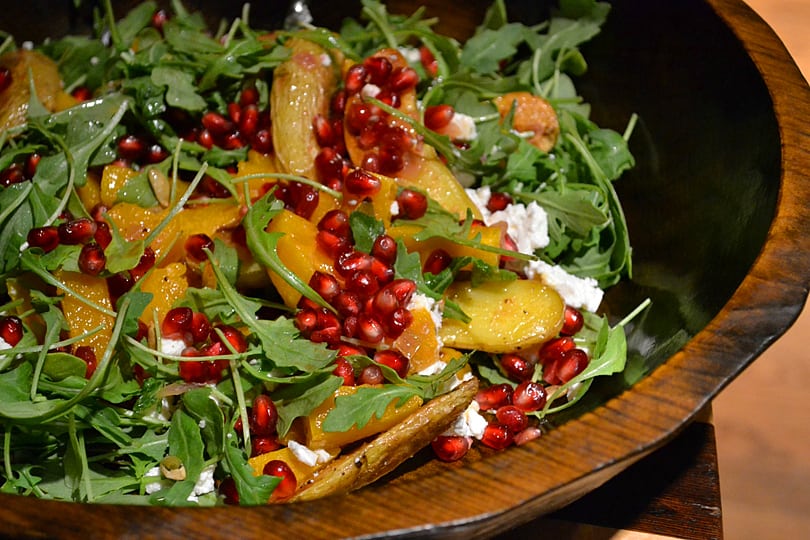 After our lovely lunch, we all waddled around the corner back to my place, opened our presents, watched a film, played charades and had another drink (or two).

And tomorrow Neill and his girl’s, are coming down for Boxing Day or in our case, Christmas Day No:2.

Seasons greeting to you all and may the New Year bring you health and happiness and a prosperous 2015.

If you celebrate Christmas and live in a country not yet mentioned above or even if it is, I’d love to hear about the things you eat for your festive feast.

Today I'd like to introduce you to Andy Nixon, my latest guest blogger in a series on street food from...