Top 10 things to do in Rome 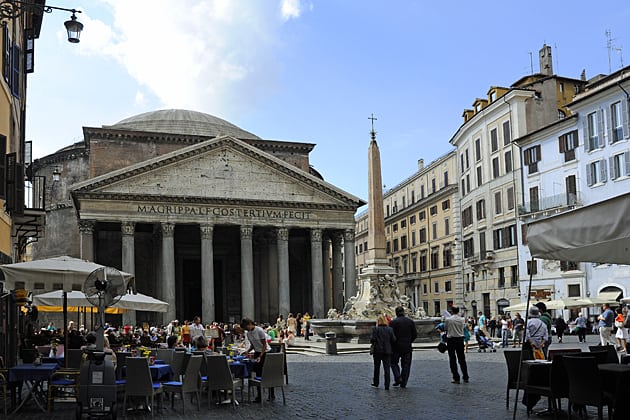 Rome has to be one of Europe’s most popular city breaks and on my first visit, I was mesmerised by her history and splendour. I spent an exhausting few days trying to cram in seeing as many places in Rome as I possibly could, then rather regretted not taking things a little slower, allowing some time to simply enjoy the atmosphere. However, I’ve been back a number of times since and have found that I can never tire of city breaks in Rome.

I do use the underground but it doesn’t cover all the city so I walk a lot. I also use taxis and I haven’t found them too expensive but nevertheless, top of any packing list for Italy should be some very comfortable shoes.

To help you whittle down your long list of must-see sites on a break in Rome to a shortlist, here’s my top ten of things to do in Rome, some obvious and some a little less. What would be on your top ten?

1. Vatican City, including the Sistine Chapel and St. Peter’s Basilica

In Vatican City you’ll find a number of Rome’s best known cultural sites such as St. Peter’s Basilica, the Sistine Chapel and the Vatican Museums featuring some of the world’s most famous paintings and sculptures. It offers a very interesting insight into Roman Catholicism of the past and the works of art that Popes over the ages have collected is outstanding. As is the interior decorations of these buildings, in particular the famous Sistine Chapel (where sadly you are not allowed to take photographs). 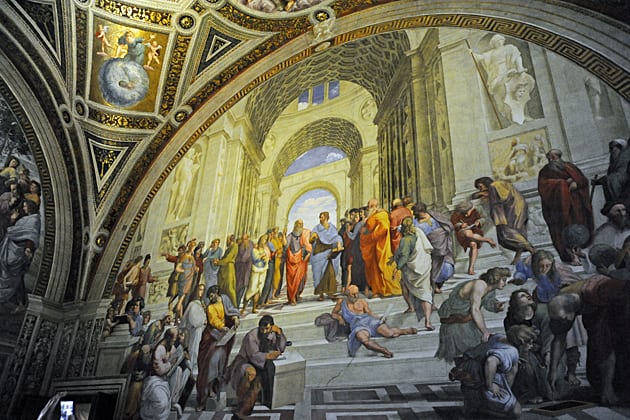 Above: ‘The School of Athens’ by Raphael, in the Vatican Museum
Below: St Peter’s Basilica, Rome 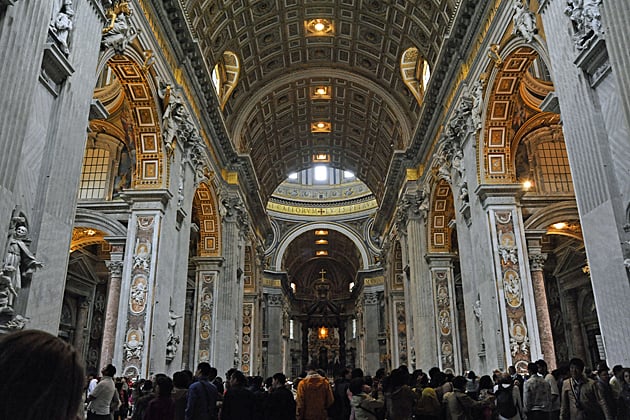 I’d really recommend booking a skip-the-line, early morning tour of the Vatican,  where smaller numbers of people are let in before the doors are open to the general public. As well as being much less crowded I found the knowledge of a guide was invaluable in bringing everything to life.

If you enjoy the surreal this is definitely a must-see place in Rome for you! After looking around the small but interesting museum (which includes a fine Caravaggio painting) visitors enter a series of small chapels which many find quite macabre. When I visited it gave me mixed feelings of curiosity and wonder, flecked with a touch of sadness. Having been forced out of their original monastery in 1631, the monks dug up the remains of some 3,700 friars and transported them in 300 carts to this crypt where the bones were used to decorate the chapels. I found the intricate patterns and sculptural light fittings, all made out of human bones, quite fascinating and strangely beautiful. To me, it was a celebration of the monks’ lives. It was only seeing the bones of some children in one of the chapels that added sadness to the gamut of my feelings.

You’ll find the museum under the church, Santa Maria Della Concezione on via Veneto.

3. Step back in time at the Colosseum

A magnificent example of Roman engineering this impressive amphitheatre once held up to 50,000 spectators eager to watch gladiator fights and spectacular re-enactments, although few, if any, involved the killing of Christians which is a common misconception, many did involve killing animals. Underground tunnels led to holding cages where exotic animals were housed. It is believed that thousands of now rare species died either in the arena or during the journey from Africa. 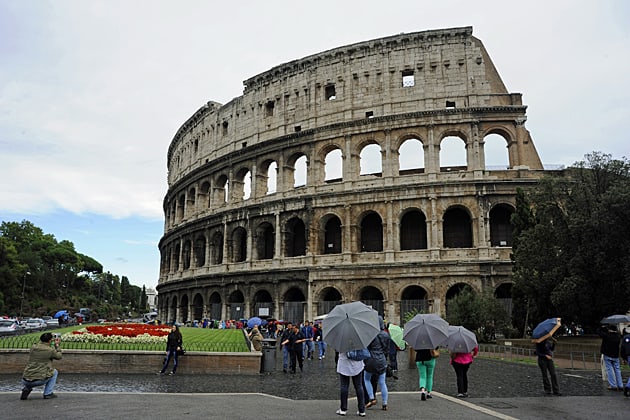 The Colosseum is on Piazza del Colosseo. If you haven’t booked a tour in advance you may find it easier to buy a ticket from one of the other two sites that the entrance fee includes, namely the Roman Forum and Palatine Hill, where the queues are usually much shorter. 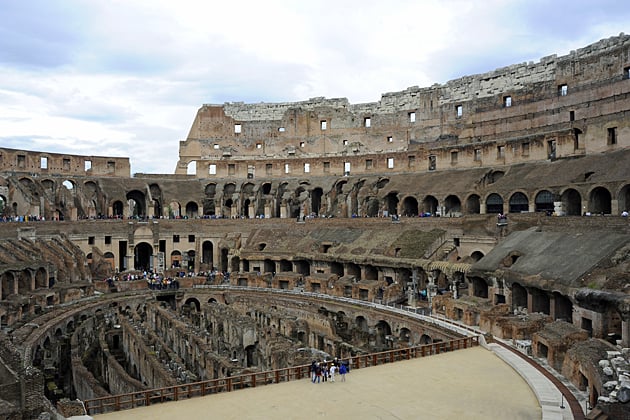 4. Visit a local food market or, better still, go on a food tour

There are a number of great food tours available which will show you round a local market, take you to the best bakers and so forth. You’ll get to taste a great range of local specialities. These tours will teach you much about Roman cuisine and are a great insight into life in Rome. You can read about the tour I went on last year in my post The authentic taste of Rome! 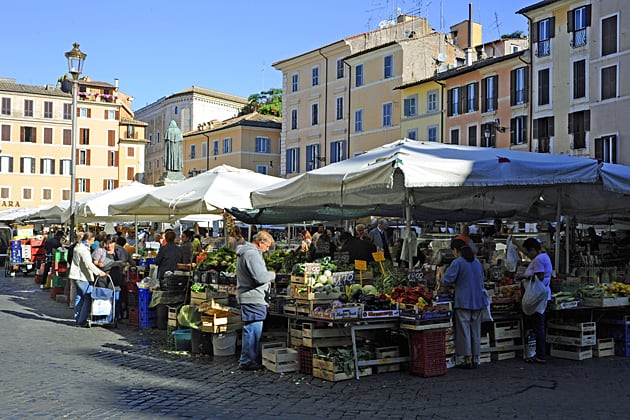 Above: Campo dei Fiori market, is one of my favourite places in Rome to visit. It’s one of the oldest and most famous markets in the city

5. Wander around the streets of Trastevere

This charming area of Rome has the feeling of a small town overflowing with local colour and character. People watch while sipping your morning cappuccino in one of its lovely piazzas, enjoy a meal at one of its many traditional and inexpensive restaurants and explore its pretty winding streets.

The best-preserved building from ancient Rome is the Pantheon. Built by Hadrian around AD 119-128, it was originally a temple to the classical deities and is still a church today. Tombs here include that of the united Italy’s first king, Vittorio Emanuele II, as well as the artist Raphael. The Pantheon is one of my favourite places in Rome.

The Pantheon is on Piazza Della Rotonda.

7. Explore underground Rome beneath the Basilica of San Clemente

While the Basilica itself is a beautiful and interesting building, well worth a visit in its own right, you can also step back in time and visit the fourth-century basilica directly underneath it. Beneath this is yet another level with a first-century building that can also be explored. For centuries people were unaware of these two lower levels that were only discovered in the middle of the 19th century.

The Basilica of San Clemente is very near the Colosseum off via Labicana. No photography is allowed here.

8. Throw a coin into the Trevi Fountain

With the God of the Sea standing proudly in the centre, torrents of water tumble over Tritons taming Hippocampi (winged horses with fishes tails) in this much-loved Rococo fountain. It’s one of the most popular places in Rome to visit. Superstition has it that if you stand with your back to the fountain and throw a coin with your right hand over your left shoulder, into the waters, you will one day return to Rome. This later evolved into throwing a second coin to find love and a third to marry that love. The coins are regularly collected and donated to charity. 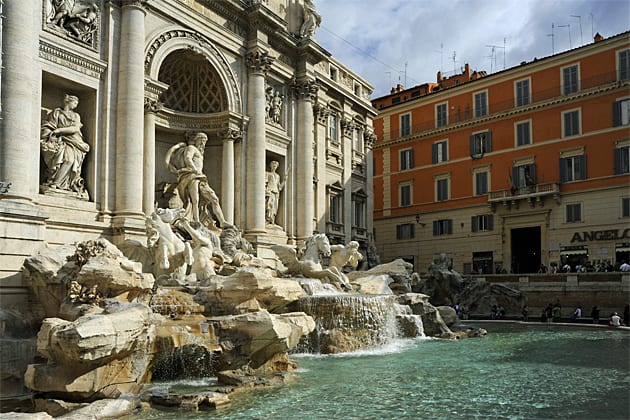 Always surrounded by a throng of photo-snapping tourists, the Trevi Fountain remains one of the most popular sites in Rome, most probably due to this romantic superstition, made famous by the 1950’s film “Three coins in a fountain”. The fountain is on Piazza di Trev and is particularly lovely at night.

9. Dress up to the nines for a night at the Opera

Splurge on a box for a night at Teatro dell’Opera di Roma – Teatro Costanzi (as the acoustics are dreadful in the higher, cheaper seats). It’s a great excuse to don your posh frock but more casual wear is perfectly acceptable, other than maybe on the opening night.

The Teatri dell’Opera is on Piazza Beniamino Gigli.

10. Visit a gelateria for some artisan gelato

There is a huge number of gelaterias in Rome – some very good ones and some not so good! A great way to tell if the gelato is the real deal is to check the colour of the pistachio; if it’s bright green it was probably made from a powdered mix.  Likewise, if the banana flavoured gelato is bright yellow, go elsewhere. After all, bananas are cream, it is only the skin that is yellow! Equally dubious is finding a flavour on offer out of season, such as strawberry in winter. You’ll find a great list of top gelaterias in The Gelateria Guide of Rome. 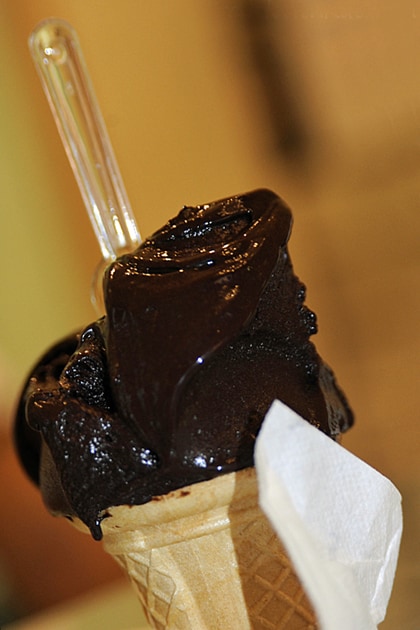 "Grape juice, time and passion and nothing else" explains Roberto "There is no sugar in genuine balsamic vinegar." I'm at...