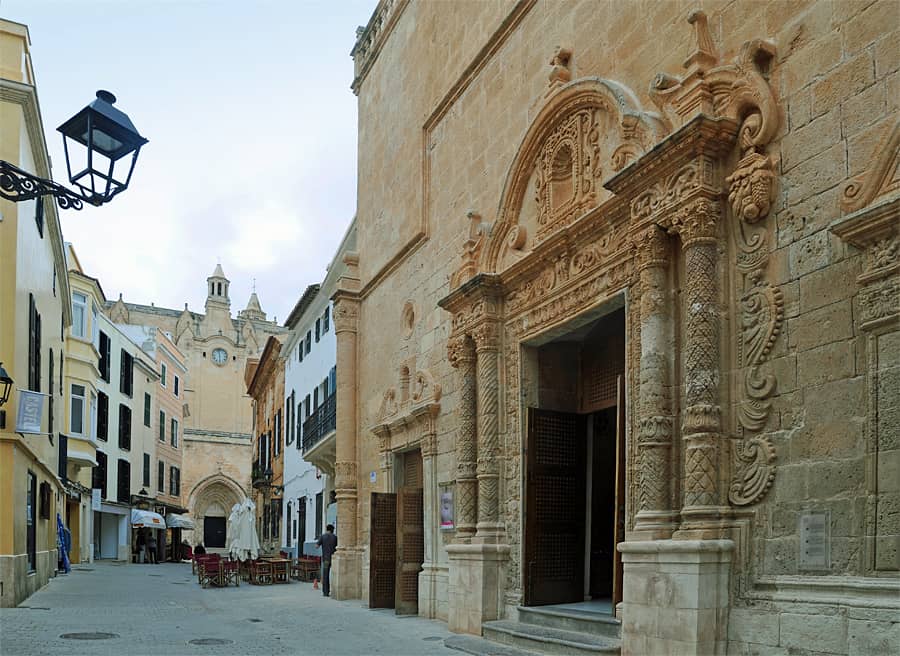 As I wander around the historic old quarter of Ciutadella, past majestic peach coloured buildings, historic squares and through a maze of narrow alleys ways, I catch a glimpse of the turbulent history of the Spanish island of Menorca thanks to my guide. Luis tells tales of piracy, plague, fiestas and tradition, not forgetting the obligatory star-crossed lovers. He brings these old streets to life with echoes from the past.

Ciutadella, nicknamed Vella I Bella, the Old and Beautiful

Ciutadella, on the west coast of Menorca, was first settled by the Carthaginians. It became the island’s capital and grew into a strong trading port. One of two natural harbours on this strategically placed Mediterranean island, the city has seen many rulers come and go over the centuries including Phoenicians, Greeks, Romans, Vandals, Moors, British and French. It was when the British arrived in the early 18th century that the island’s capital was transferred to the rival port town of Mahón on the east coast. Traditional life in Menorca has not been blatantly swept aside by tourism and wandering these old streets you can gain a sense of stepping back in time.

A walking tour of Ciutadella

Our walk starts in Plaça des Born where an obelisk stands proud, rising high above the market stalls in defiance of the 16th century Turkish invaders that once defeated this noble city; a memorial to those who died and the 3,000 plus survivors who were shipped off to Constantinople (now Istanbul) and sold into slavery.

Tucked in one corner of the square you’ll find Bar Imperio, a favourite with the locals for a coffee or perhaps a refreshing glass of Pomada, the local gin mixed with cloudy lemonade. On the opposite side of the square, looking over the city walls, I can see the pretty harbour lined with restaurants and fishing boats. A flight of stairs lead down to the water’s edge, a wonderful place for a leisurely stroll and a spot of lunch.

Tip: Read my previous article to discover Where and What to Eat in Menorca.

Climbing back up the stairs passing pretty little shops we make our way to Plaça la Catedral. The lovely peach coloured cathedral completed in the late 14th century is one of the few buildings that survived the 16th century sacking of town by the Turkish pirates. Once a mosque stood here, the minaret of which still remains.

Opposite the cathedral stairs, also built in peach limestone is Casa Olivar. Dating back to 1663 it is one of the few stately homes of the town open to the public. From Plaça la Catedral we turn into Carer Roser.

Looking upwards Luis points out these two cheerful figures in the window, colourful modern addition to these enchanting streets. A few paces further and we reach the late 17th century church of ‘El Roser’ with its exquisite doorway. Around the corner on Carrer Seminari, art lovers will enjoy a peek inside the gallery of Pedro Rodríguez.

A couple of streets away in Ses Voltes on Carrer Josep Maria Quadrado, the Arabic arches of the covered walkway run along a narrow alley from Plaça Nova back to the cathedral square. You’ll find many independent shops and quaint cafés, oozing with character here. Rows and rows of traditional Menorcan sandals, in a rainbow of colours, make pretty window displays.

A sheep stands proudly atop a column carrying the flag of St John. Both play an important role on the saint’s feast day each June.

Heading back past the cathedral and along Carrer Major des Born brings us once again to the square where we started, Plaça des Born.

The town hall, with a facade reminiscent of the Arab citadel on which it was built, looks out over all important proceedings, for it is in this square that many social events and fiestas are held. Today Ciutadella seems like a sleepy little town but come the feast of St John this square is heaving with throngs of people. Pomada flows freely and the beautiful Menorquina black horses dance on their hind legs through the crowds. The brave try to place their hand on the horse’s heart for good luck, just as they have for very many years, although these days there’s the added recklessness of trying to take a selfie as you do it.

But for now it is time to head back to Bar Imperio. There’s a glass of Pomada with my name on it.

This article is now available to download for free on GPSmyCity. It can also be upgraded to include an offline map and GPS guided travel routes. Follow this link on your mobile or android device to find out more, Walking Tours in Ciutadella. Alternatively, Explore Ciutadella with my guide, Luis Amella of Menorca Guides if you want to know more about this fascinating city.

Check out more of my articles from Spain.

Thanks to Menorca Tourism for hosting my stay in Menorca, in a project in partnership with Spain Tourism and Travelator Media.