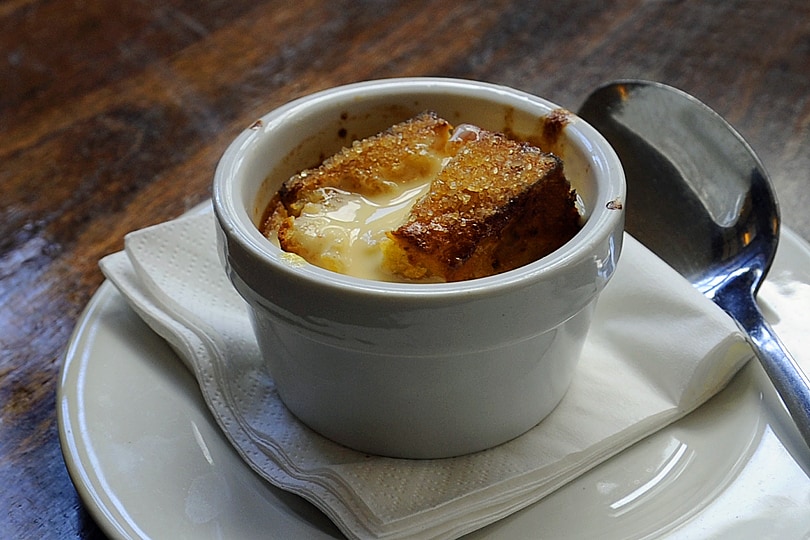 With more Indian Restaurants in London than in the whole of Mumbai and Delhi combined, it’s no surprise that you can find some damn fine curries in the capital of what is, after all, a nation of curry lovers. As I stroll up Brick Lane, a street well-known for being jammed packed full of curry houses, the smell of spices.. cumin, cardamom, turmeric… soon have my mouth salivating, despite all the wonderful food I’ve already eaten this morning on a walking food tour of London’s East End.

My day started just before 11 in Spitalfields Market where I met my fellow foodies and my Eating London guide, Emily. With tummies rumbling due to skipping breakfast (thank goodness), we set off on a journey through historic London. Interspersed with tales of Jack the Ripper, poverty and rejuvenation, a fabulous tour followed, taking in the best food establishments in the area, all selected for their excellent, authentic cuisine, history and importance to the community.

What better way to begin the tour then with a round of bacon butties at St. John Bread & Wine. An off-shoot of the original ‘Nose to Tail Eating’ restaurant of Fergus Henderson, celebrated as one of the top 50 restaurants in the world, St John Bread and Wine offers the finest seasonal British produce using where appropriate, every part of the animal, as demonstrated by their signature dish, Roast Bone Marrow and Parsley Salad. We were here though for something more familiar, a traditional bacon sandwich, an extremely popular breakfast here in England. 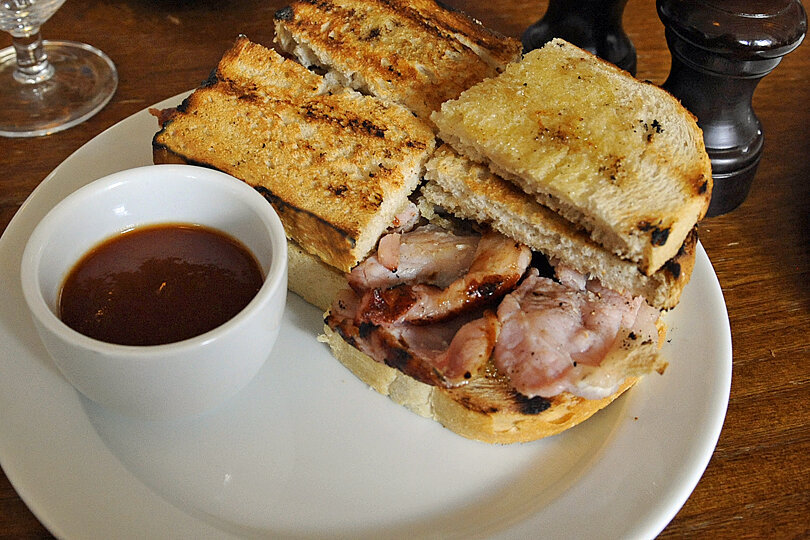 I arrived expecting great things and apart from it being slightly over chargrilled, it did not disappoint from the bread, fresh from their in-house bakery to the moist and tasty Gloucester Old Spot bacon to the ketchup made from succulent tomatoes with an apple twist.

While disappointed to only have a quarter of the above sandwich I knew it was for good reason as this was just the beginning.

Bread and Butter Pudding at The English Restaurant

With Emily at our helm, we made our way to the corner of Crispin Street and Bushfield Street to The English Restaurant for another old favourite of mine, Bread and Butter Pudding with lashings of custard. Made with slightly stale bread, this was once known as Poor Man’s Pudding or Dustman’s Wedding Cake, as it was traditionally made by the poor so as not to waste any bread. It is now a well-loved favourite throughout the nation. While it couldn’t be easier to make, hats off to The English Restaurant for baking it to perfection, time and time again, from their homemade brioche and serving it with hot vanilla and rum custard. A 5 star pudding if ever there was one.

Heading back to Spitalfields Market we check out the cheese at Androuet, reputedly the home of the best selection of cheeses this side of Paris. They buy directly from the producers and only sell cheeses that are in season and we were here to sample three of them. 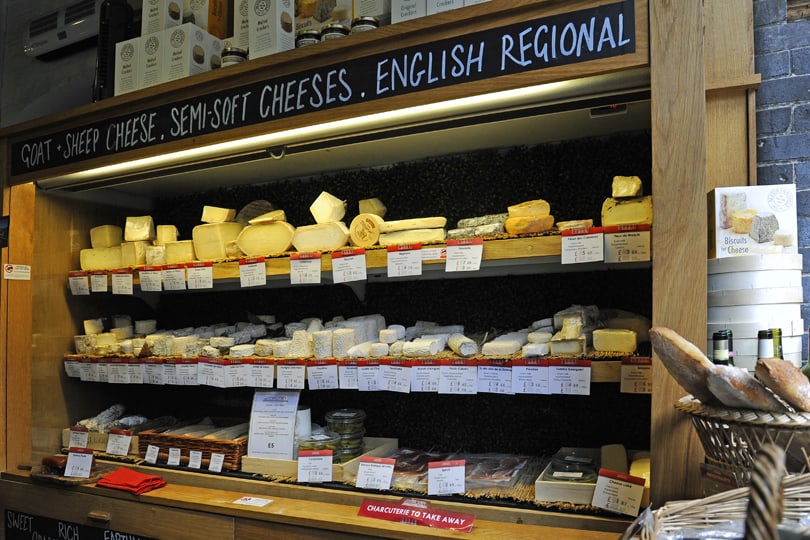 First up Ogleshield, a Somerset cheese made from an unpasturised cows’ milk, aged for 4 months. It’s a mild, buttery cheese, perfect melted on toast I’m told.

Next came Westcomb Cheddar, which has been aged for 16 months in the caves at Cheddar Gorge, giving this cheese its earthy flavour.

But the best is saved for last, Stilton Cropwell Bishop from Nottingham served with caramelised walnuts. It has only been aged for 12 weeks. It’s the creamiest, loveliest Stilton I have ever tasted.

A fine selection of cheeses and while I’m not sure if the sexy French accent of the young man serving us made the cheese taste any better, it certainly didn’t hurt! 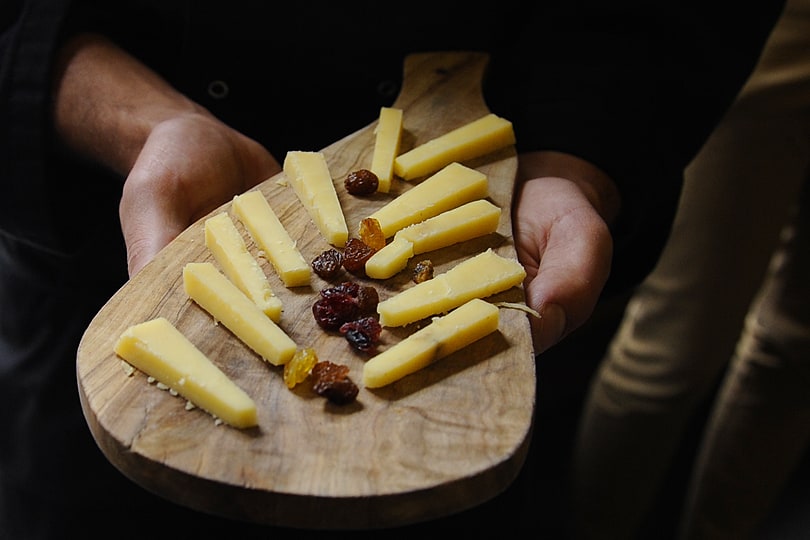 Being so close to London’s docks, fish and seafood were always readily available in the East End. In fact the shells from the oysters, that were once a poor man’s food, used to litter the streets.

When a Jewish immigrant, just 13 years old, started selling fried fish (reputedly originally from Portugal) with chips (originally from Belgium) I bet he never thought that this would become one of, if not THE one dish, most associated with Britain. 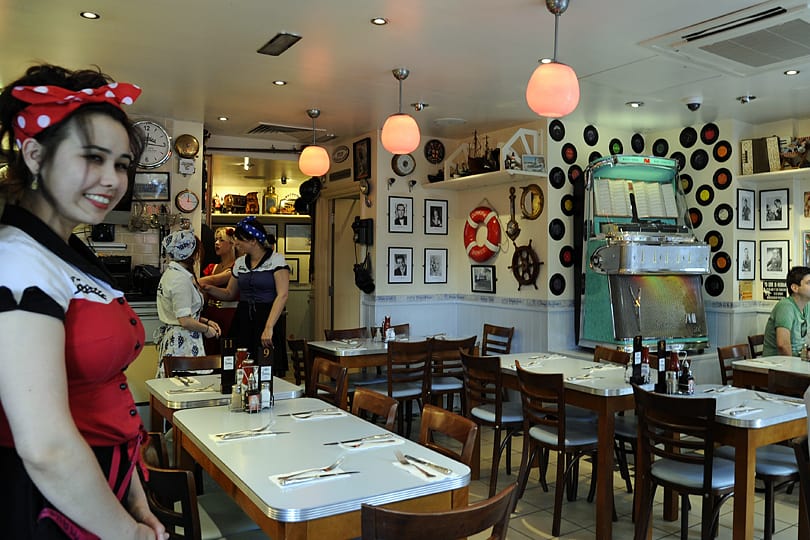 Congratulations to Poppies Fish & Chips, Spitalfields  who, having been a finalist in the National Fish ‘n’ Chips Awards 3 years in a row, finally won outright this year. All their food is made from fresh, locally sourced ingredients and sustainable fish and their chips are hand-cut on site from British farmed Maris Piper Potatoes. What immediately caught my eye though was the 1950’s themed decor, the costumes of the staff and the inviting atmosphere this created.

We each tried a mini portion wrapped up in Poppies own newspaper. The chips were indeed good but they were outshone by the fish which was perfectly crisp on the outside with light, flaky fish on the inside. 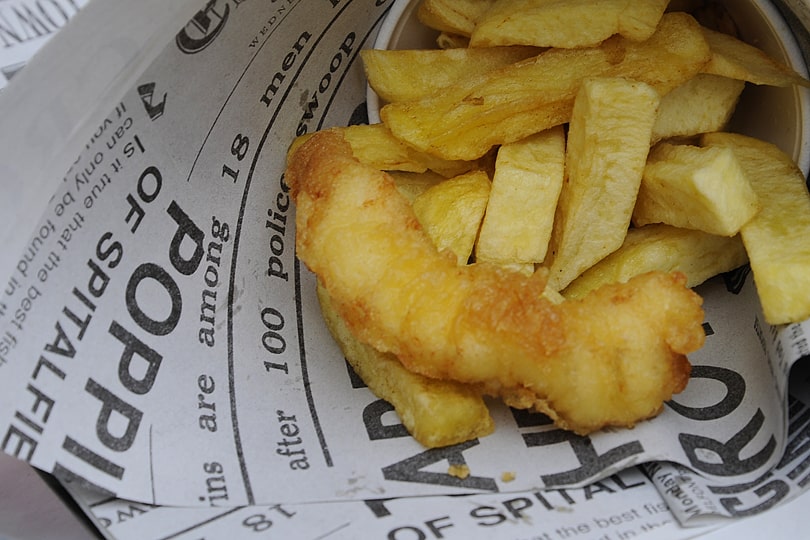 A drink at The Pride of Spitalfields

No tour of the East End would be complete without a peek inside a traditional English boozer, complete with red velvet upholstered seats and sticky carpets. The cosy and welcoming, The Pride Of Spitalfields was recently proclaimed the East End Pub of the Year and even Lenny, the pub cat, has become quite famous. Sadly he refused an interview. 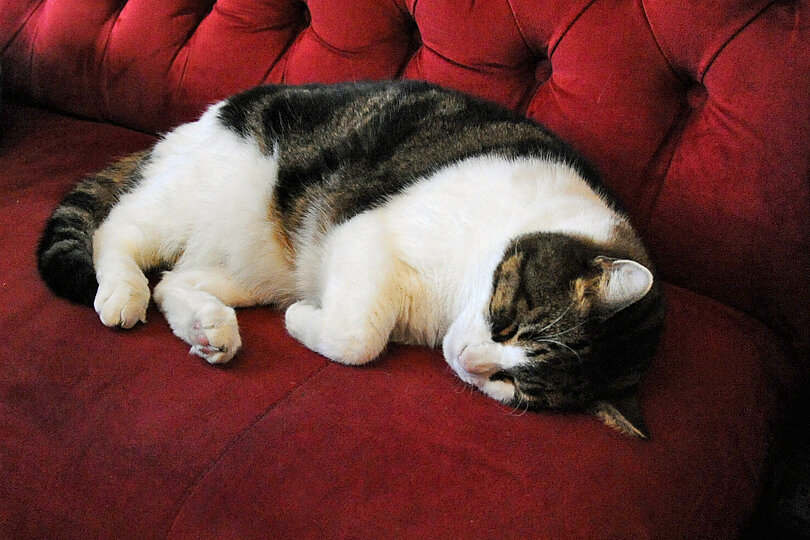 We sampled a great real ale, Truemans Lazareth and a delicious, crisp and refreshing cider, Orchard Cider, which has won awards for being the best in Britain and really hit the spot for me. 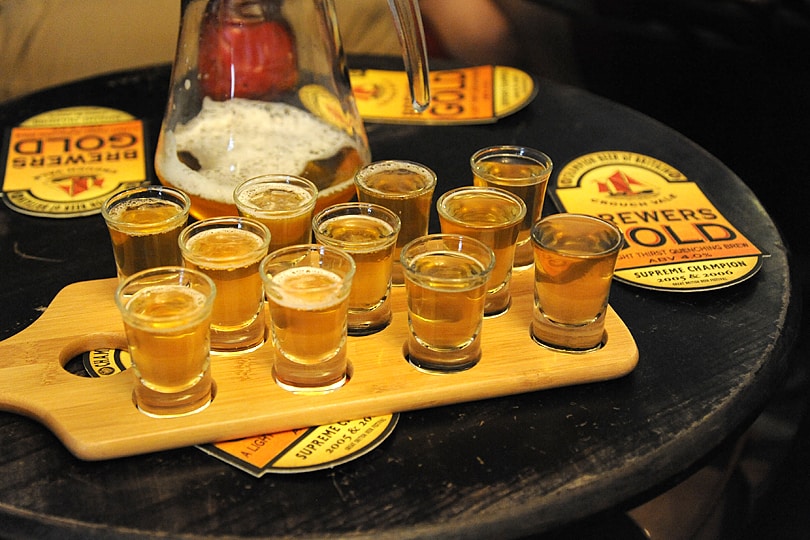 Although they don’t serve food at the weekends I’m told the food here is good and with everything under £4, a real bargain to boot.

And now it was time for the curry. From the outside or even the inside, Aladin does not particularly stand out as any different from the very many other Indian and Bangladeshi restaurants in Brick Lane. Aladin, however, is one of the oldest and was first opened in 1979, serving the Bangladeshi Migrant community. It’s very reassuring to know that their chef has been with them for over 30 years. They have won numerous awards and currently hold the Best Curry House in Brick Lane. 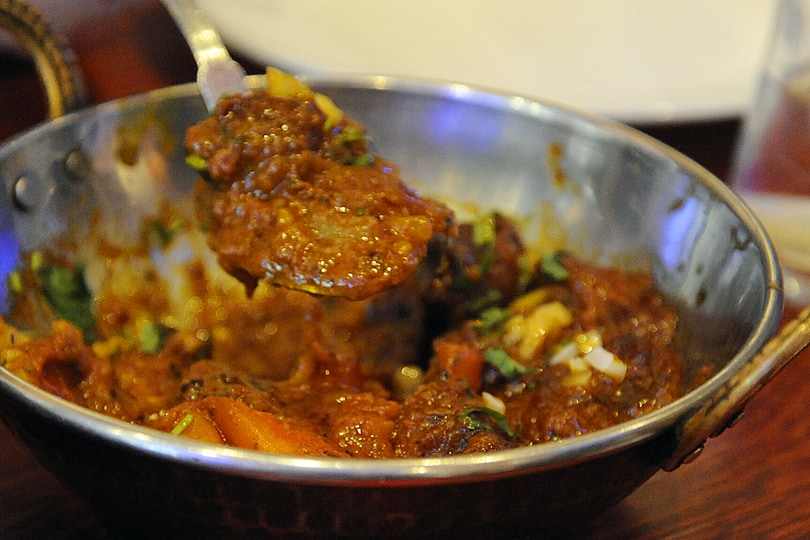 We sampled their Vegetable Bhuna and their Chicken Madras, both of which were excellent. However, their Lamb Pathia, was in a league all its own. The lamb is slowly cooked in a tomato based sauce with lime and sugar to give a wonderful sweet, sour and spicy flavour, all in one. It was simply superb. I couldn’t get enough of it (and I’d have happily licked the bowl out but thought that might look a little unprofessional so just managed to resist – tough call though).

From curries to bagels or rather beigels at the Jewish bakery, Beigel Bake. They have been sold here for 24 hours a day, 7 days a week since 1967.  They’re a popular anytime of day and even at 3 o’clock in the morning you’ll often see a huge queue. We tried their moist and tender salt beef (or rather corned beef if you are from the States), carved as you wait from a slab kept warm in the front window, with English mustard and crunchy gherkins. I was sadly already so full that I could only manage a few bites but they were excellent and a big hit with the group. 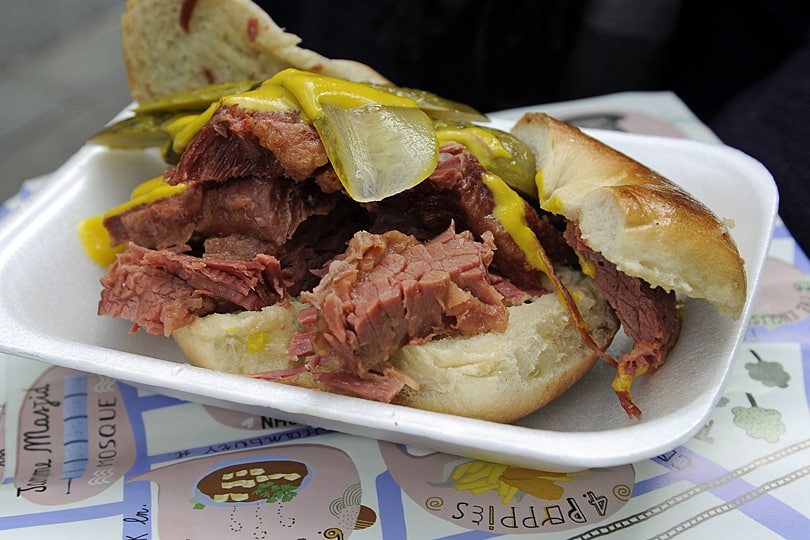 Our last stop of the day was at the cooler, than cool Pizza East. So cool in fact that you weren’t allowed to take photographs of the interior which resembled a huge warehouse with industrial decor, bare brick and concrete and long tables with benches to sit on. Luckily, despite being exceptionally uncool, I was allowed in and boy was I glad of that. A refreshing cup of tea was very welcome and the dark chocolate and salt caramel tart, which I suddenly found a little room for, was heavenly and a serious contender for the best dish of the day. 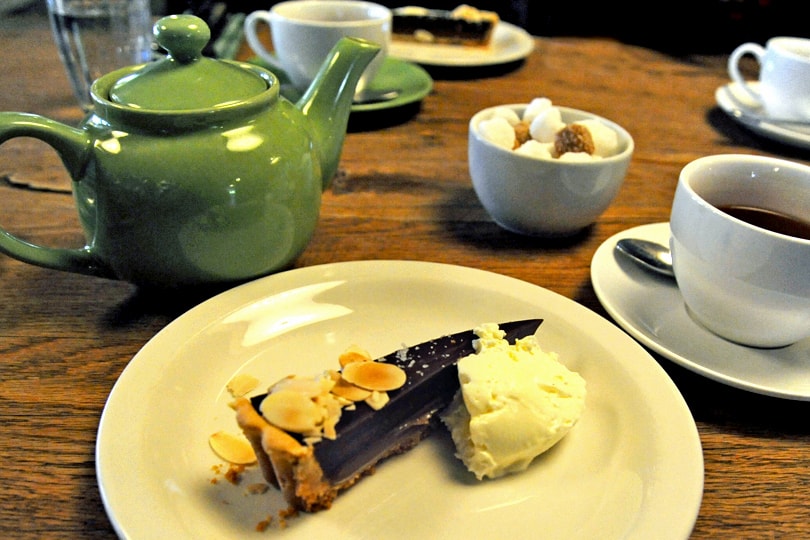 So which was the ultimate favourite?

Not only was the tour itself excellent, with some really great food, it also gave a fascinating insight into the history of the area thanks to our enthusiastic and knowledgeable guide, Emily.

My personal favourite dish of the day had to be the Lamb Pathia with the Chocolate and Caramel Tart running a close second but really it was very hard to choose between such a fantastic collection. Many of my fellow foodies (from Australia, Ireland, the USA and some like myself from England), spoke of the Salt Beef Beigel as being their number one but the out-and-out winner of the day was voted to be the Bread and Butter Pudding from The English Restaurant. 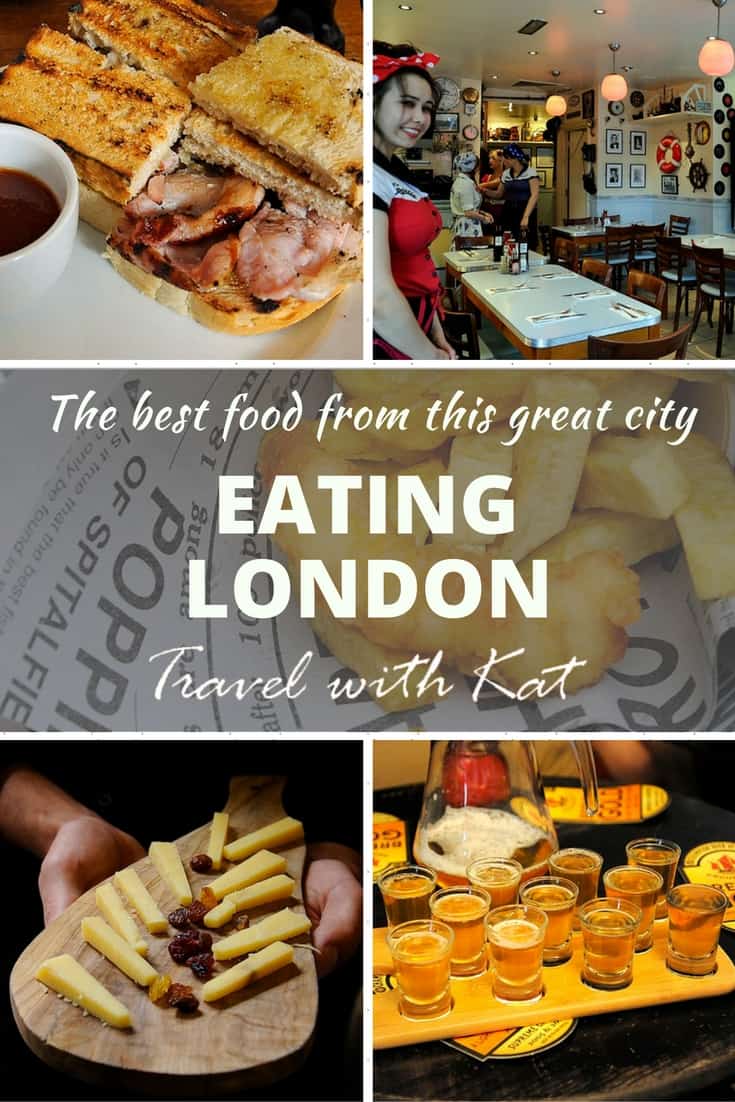 Thank you to Eating London for my complimentary food tour. As always my thoughts given here are my own, honest opinions and I have to say it really was a superb treat. While a little pricey at £65 per person, I believe this is money well spent, especially if your time in London is short and you wish to get to know a little of the real London. Top tip, wear an elasticated waistband.

An easy-to-make summer cocktail from Greece, made from Skinos, a matiha liqueur with vodka and cranberry juice.