An edible journey around Sardinia 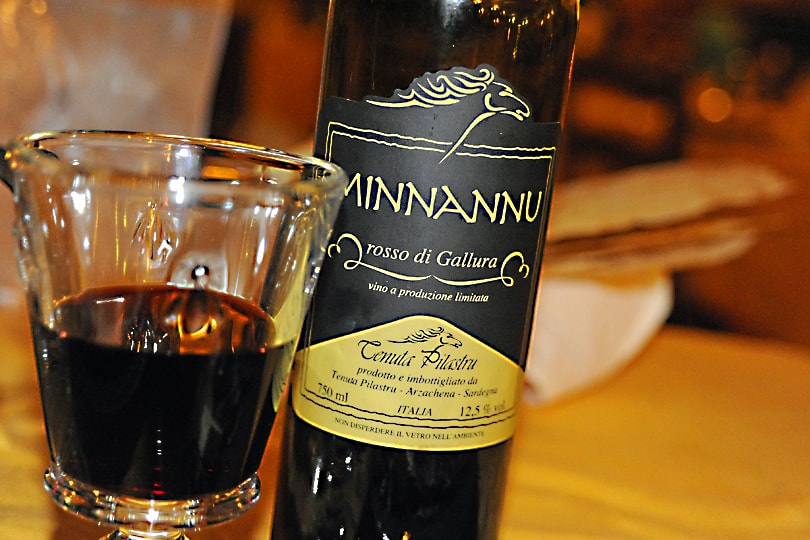 Following on from my recent posts from the lovely island of Sardinia. I’d like to tell you about the amazing Sardinian cuisine I discovered. I don’t think I’ve ever experienced so many wonderful meals in one week before, so please join me on an edible journey, starting in the south of the island.

The perfect spot for a light lunch while enjoying the best views in Cagliari. 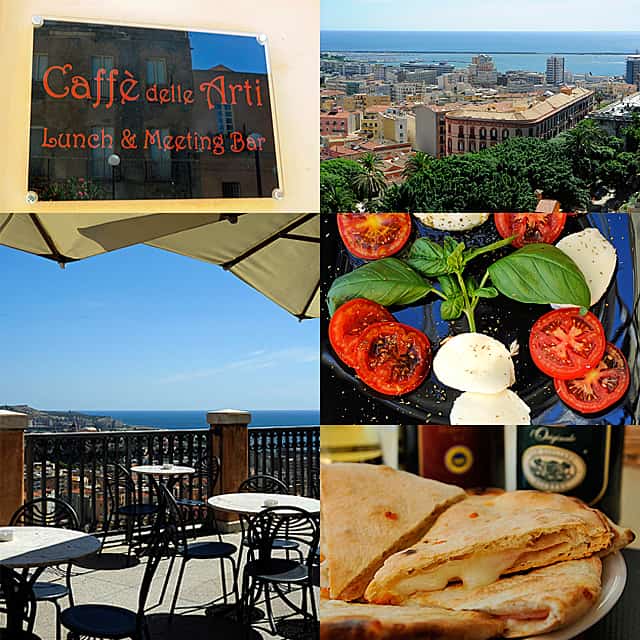 Having flown into Cagliari in the south of the island, it was great to have a chance to wander around the old town, see the cathedral and stop at the Caffè delle Arti for lunch and a cold beer.

The staff were friendly and the food was good with a wide choice but the highlight was, without doubt, the view from the terrace.

More photographs of Cagliari including the beautiful cathedral can be found here.

Tuesdays – Car park on the outskirts of Pula, Via 25 Aprile 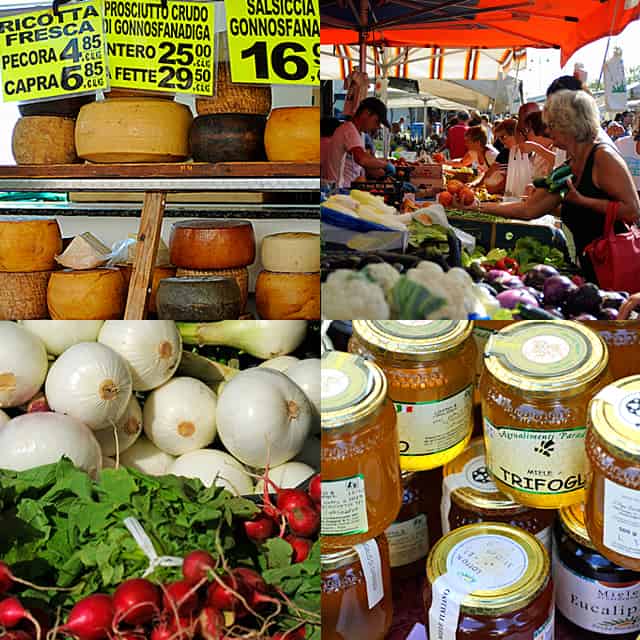 Local produce at its best can be found at the open-air markets such as the one held every Tuesday at Pula. The honey and all these wonderful cheeses in particular caught my eye and, as I found out that evening, they go superbly together.

More of my photographs of Pula market and a list of other markets in Southern Sardinia can be found in my article on The Sardinia Blog.

A great hotel for families, couples and watersports enthusiasts. 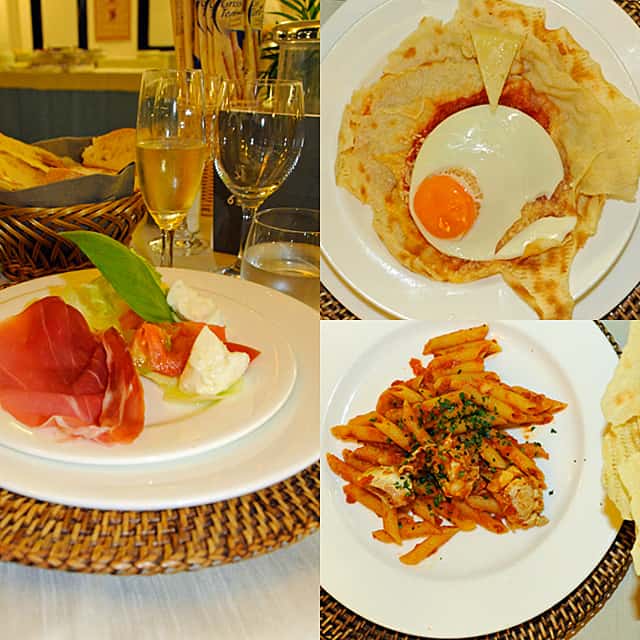 We had a lovely evening meal here and Roberto our waiter couldn’t have been more charming and helpful. There was only a small choice but these included traditional dishes, which I always like to try, and everything was very good.

The aged cheese served with honey at the end of the meal was superb. My only criticism would be that the restaurant itself was very brightly lit. Softer, more romantic lighting would improve the atmosphere in the restaurant no end. 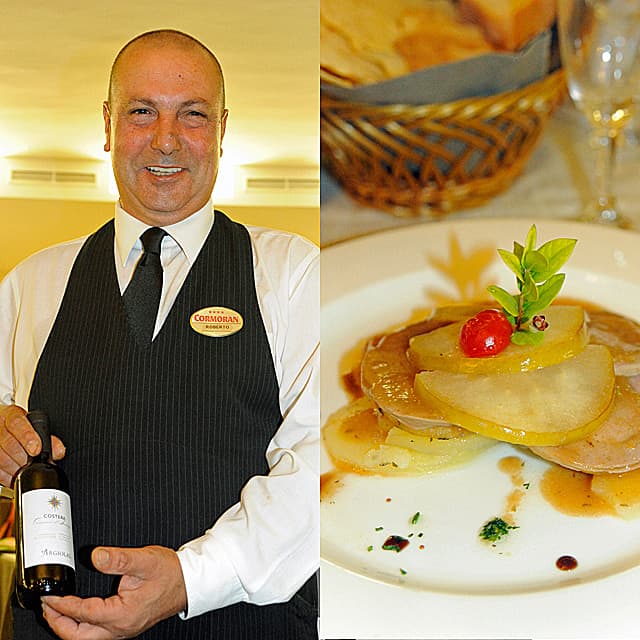 A common factor throughout almost every meal that week was a large basket of crisp, wafer thin bread, known as carasau. This was first produced for the shepherds who spent many weeks, if not months away from their families tending their sheep. This bread was designed to last a very long time without going stale. At Hotel Cormoran one of the dishes we tried was ‘Su pani frattau’ Ogliadstrina style – a poached egg on a tasty tomato sauce with pecorino cheese, served on a bed of carasau softened in lamb broth and very good it was too.

A charming hotel tucked away in the mountainous interior of the island with an outstanding restaurant.

I had been told that Madonna had once rented out the whole hotel for a week. Sadly, I only got to stay for one night but I was particularly looking forward to it as the photographs I had seen of the hotel looked amazing and I had heard some VERY good things about the restaurant. You can read my article about the Su Gologone on the Boutique Travel Blog but here I’ll just tempt you with the wonderful cuisine.

We ordered the set menu which included the roast suckling pig, cooked by an open fire in the restaurant. This is the hotels signature dish and it is famous throughout the island for it. I tried it a number of times during my stay and while it was always very good, here it was superb! Before the pork we’d already been served cured meats, delicious cheeses and various Sardinian delicacies including sheep’s intestines and brains and while my companion was a little reticent, I tucked in and loved it all (although I’ll admit the intestines didn’t look very appetising!). It was a ridiculous amount of food. By the time the pork came out I was l already feeling rather full. I did manage to eat it though as well as a little homemade ice-cream but the brightly coloured handmade sweets I’m afraid were left untouched.

While we were eating, we struck up conversation with the couple on the table next to us and they mentioned that they had friends come over from Rome, just to eat here!

A beautiful hotel and probably the most luxurious that I stayed in that week.

This lovely, stylish hotel ambles up the hillside with sensational views across the Gulf of Arzachena to the Costa Smeralda. After my serious over indulgence the night before, and despite not having had any lunch, I held back from having a starter but my colleague’s raw steak looked superb. I tucked straight into my main course of rare sirloin steak “tagliata” with a rocket salad and for dessert I tried their selection of aromatic chocolate. Each little glass contained chocolate mousse with first coconut, followed by cinnamon, then raspsberry and then pomegranate and lastly brown sugar. I’m sorry to say this looked better than it tasted and was just merely passable but everything else at Villa del Golfo, including the wine and the service, was superb.

Agriturismi are well-known for their superb food.
My expectations were high but they were exceeded! 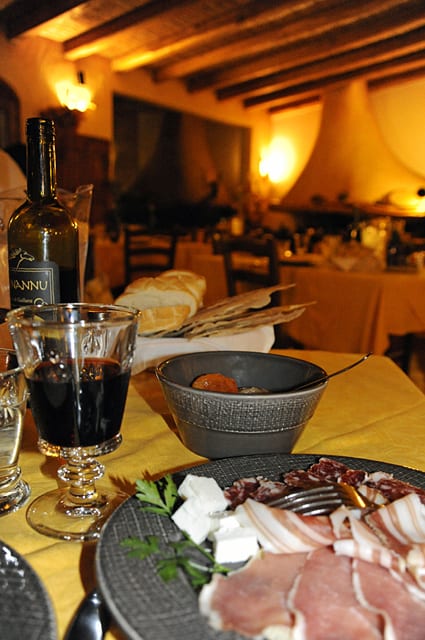 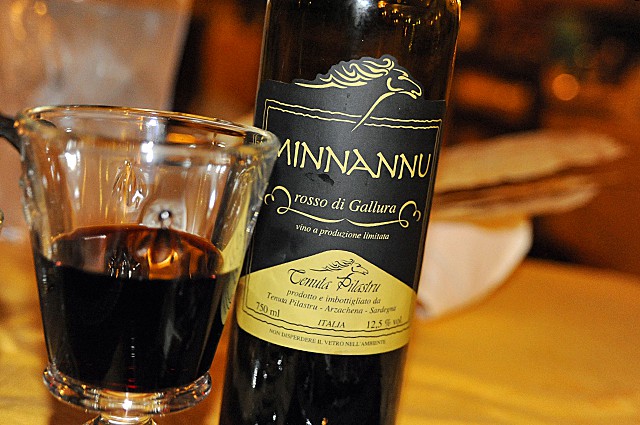 A bottle of the Tenuta Pilastru‘s own wine was already on the table waiting for us. It was excellent (and a couple of bottles found their way into my suitcase!) What followed that evening was beyond belief, both in quantity and quality. 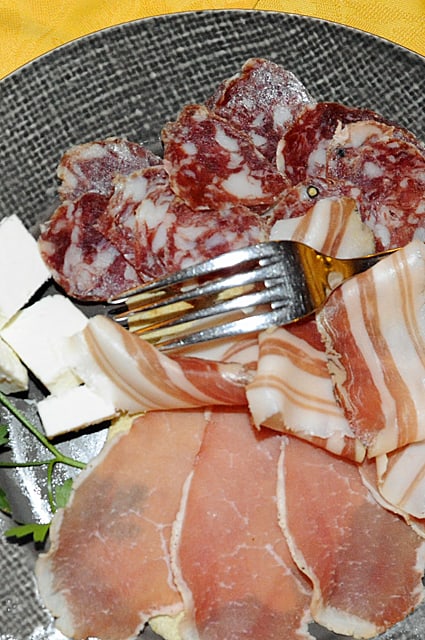 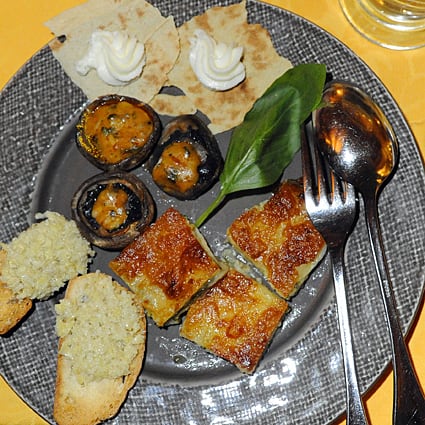 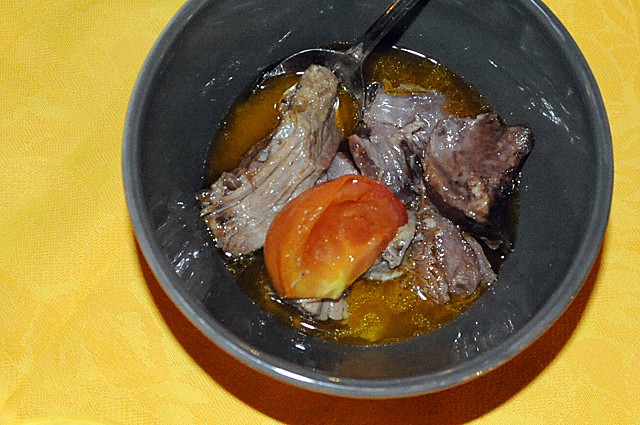 Lamb that melted in the mouth!

…or should that be courses, as we didn’t have to choose between these two delicious dishes. We were each given both! 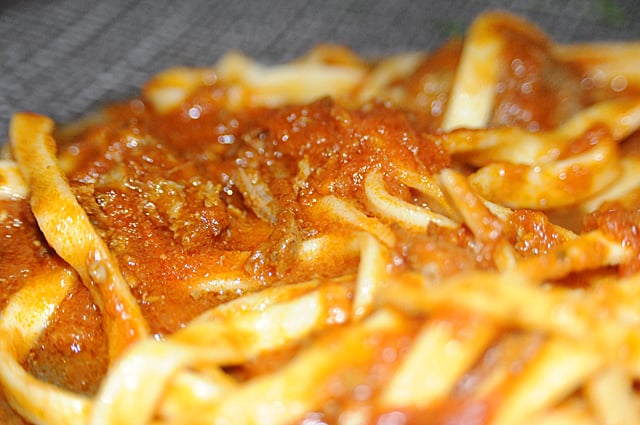 Home-made pasta with a wild boar and tomato sauce 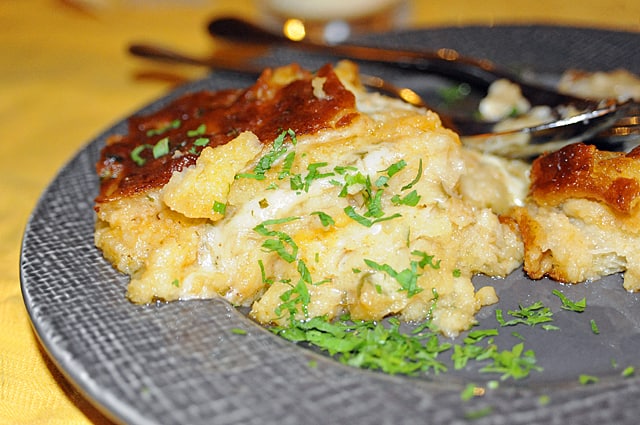 Zuppa Gallurese – a kind of cheesy bread and butter pudding – so good! 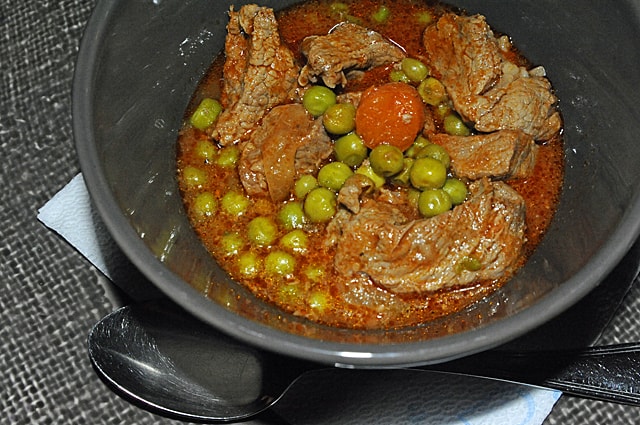 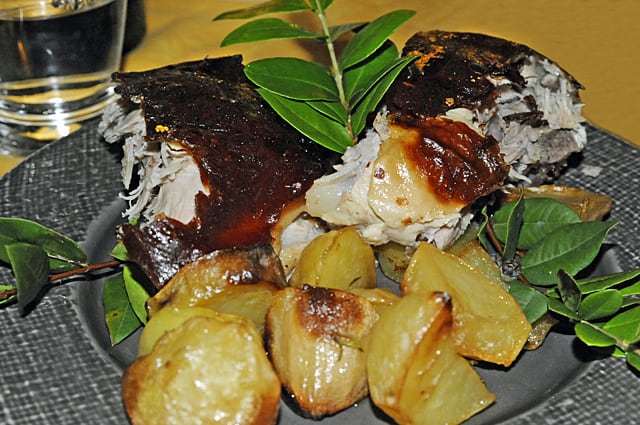 Desserts with fruits, coffee and digestives… 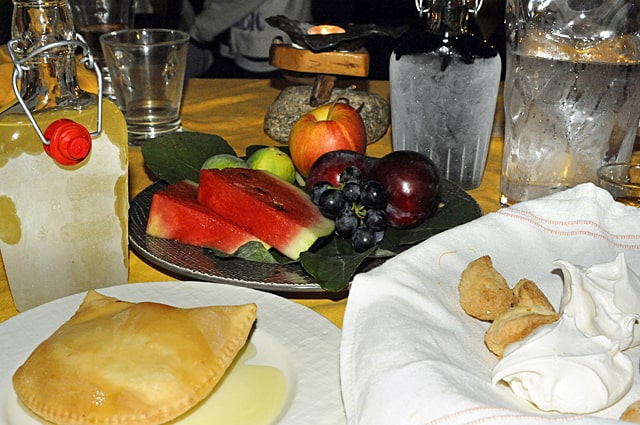 We didn’t have to choose between the various desserts either – we could eat them all! 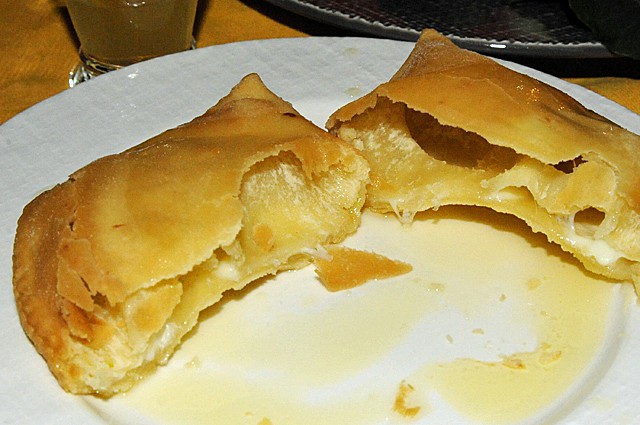 Seadas – pan-fried pastries filled with cheese and drizzled in honey 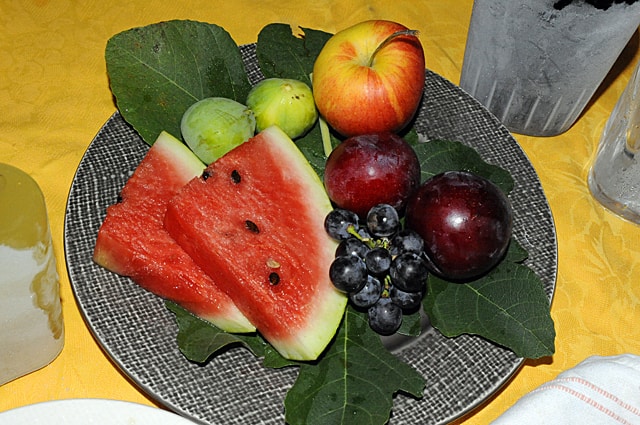 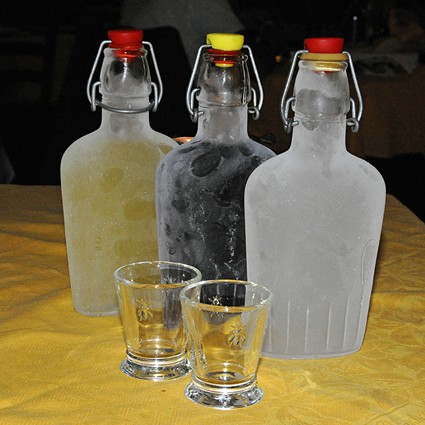 Yep, all that was just one evening meal at a Sardinian agriturismo!

Including the wine and the digestives, this set menu was just 70 euros for the two of us, less than £30 each.

Disclosure: I was travelling in Sardinia while working  for Sardinian Places. As always these are my own, honest opinions.

Cagliari (or Casteddu in Sardu meaning castle) on the south coast of Sardinia, is the island's capital and was once the capital of...