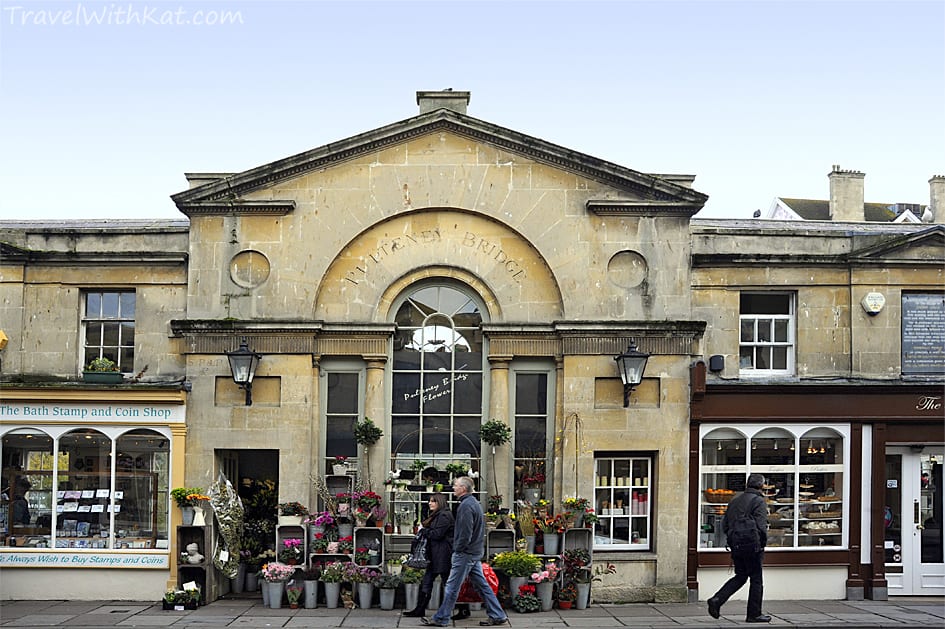 As I was growing up my family’s annual holiday was in Wiltshire in the south-west of England and each year we took the opportunity to visit the picturesque city of Bath in the neighbouring county of Somerset. I recently returned there and was delighted to find it just as I remembered. 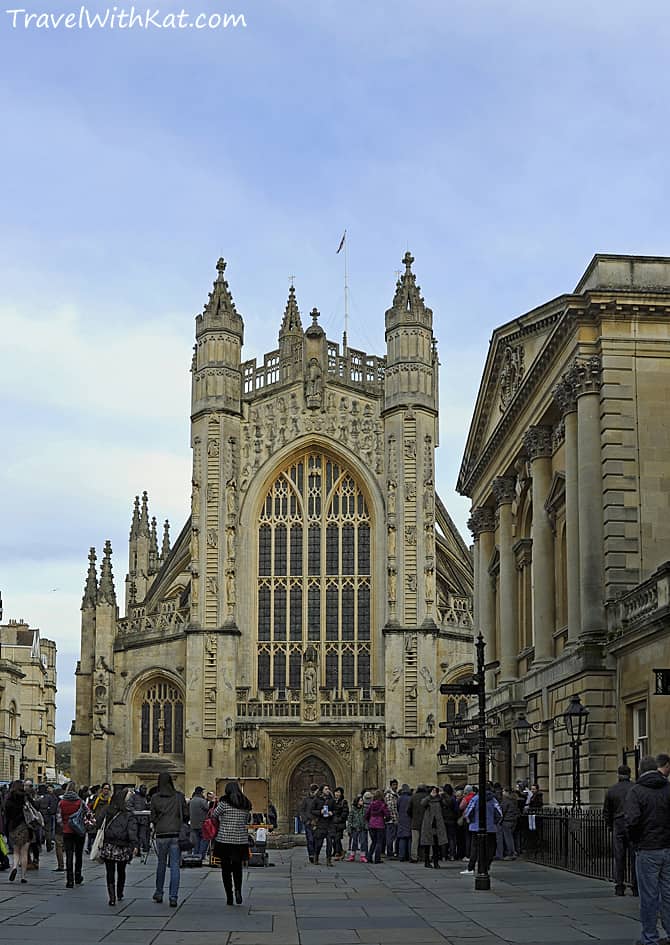 Bath Abbey and, to the right, the entrance to the Roman Baths

The city of Bath is a UNESCO World Heritage Site. It is an easy day trip by train if you are visiting London and all the major points of interest are within walking distance.

Bath was founded by the Romans when they discovered the natural hot springs here. They built numerous baths and a temple dedicated to the goddess Sulis Minerva. After the Romans left they fell into disuse. 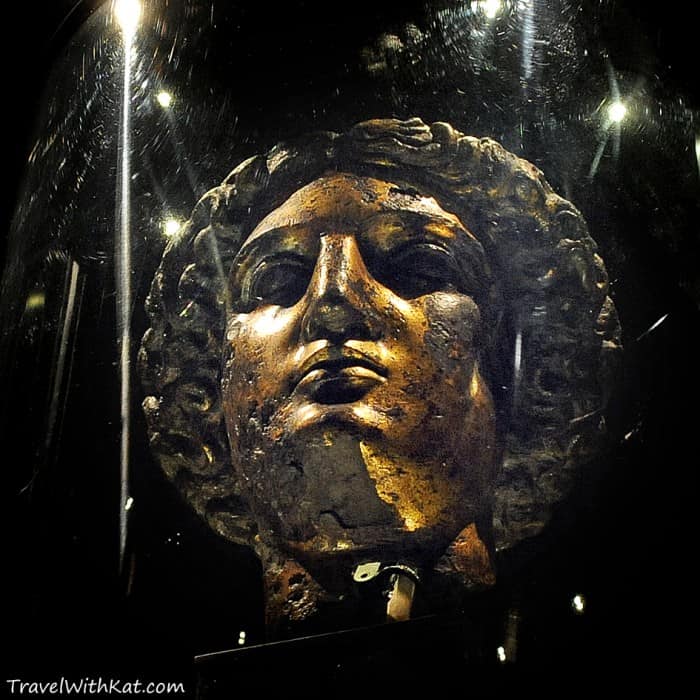 In the Georgian era, it was again a popular spa town and much of the architecture you see today, including the famous Royal Crescent and Circus, was built in the 18th and early 19th century of Cotswold stone (also known as Bath lime stone) – a mellow, honey coloured stone. Many of Bath’s building were designed by father and son architects, both called John Wood, who took much inspiration from the ancient Greeks and Romans. As you wander through Bath’s street you’ll see many fine examples of elegant columns, Grecian urns and flower swags carved in stone decorating the buildings. These were the height of fashion in the Georgian era and typify the Woods’ style giving the architecture of Bath its unique character. 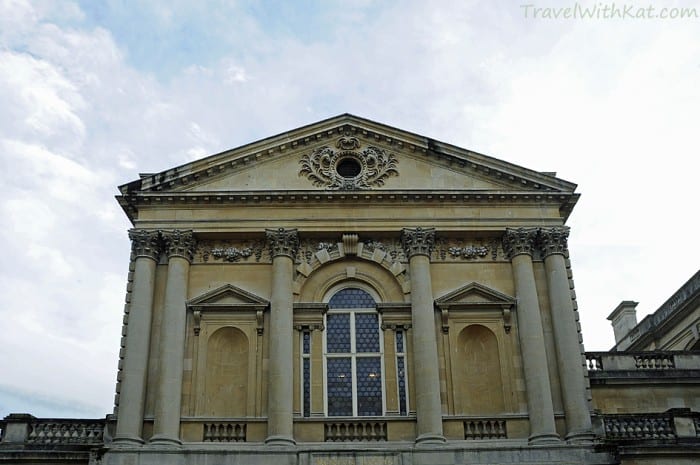 There are many wonderful things to see in Bath but I only had a few hours so I opted to visit the Roman Baths, which didn’t disappoint. It took about an hour to walk round the baths and the museum, although I could have happily spent longer. The museum has some wonderful artifacts including a bronze, gilded head of the goddess Sulis Minerva (pictured above) and the site’s guides were eager to share their knowledge, giving a fascinating insight into the lives of the ancient Romans. 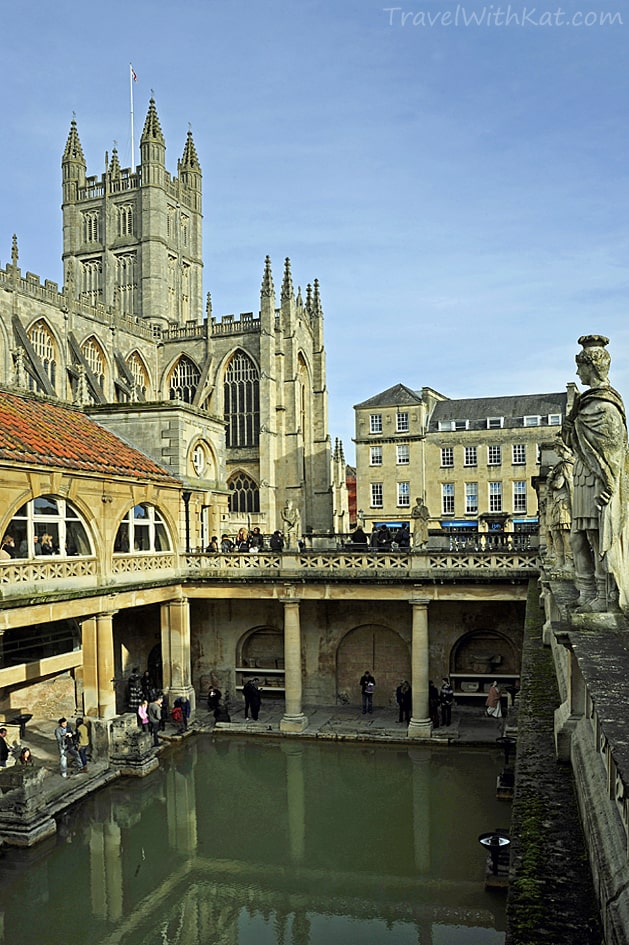 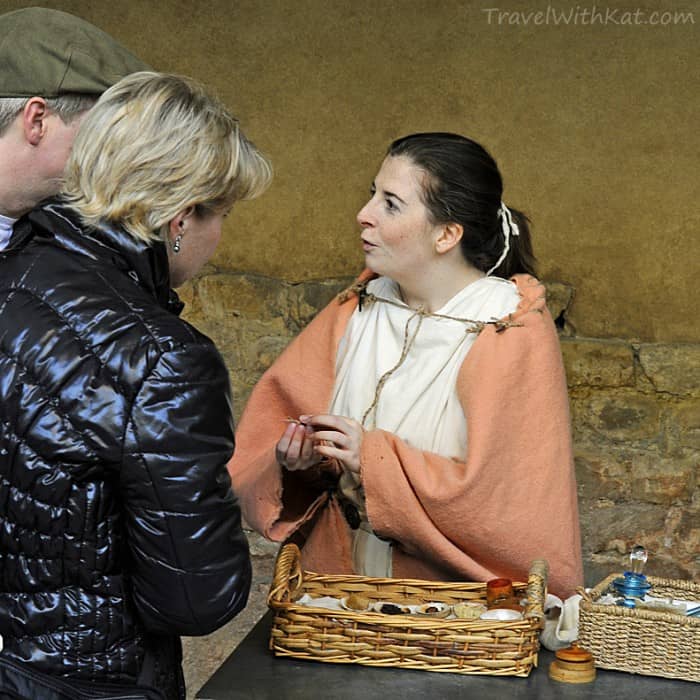 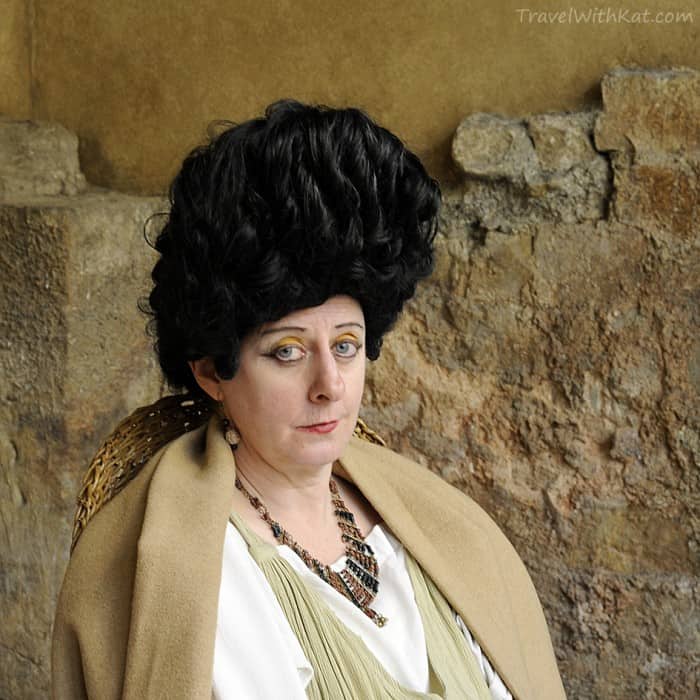 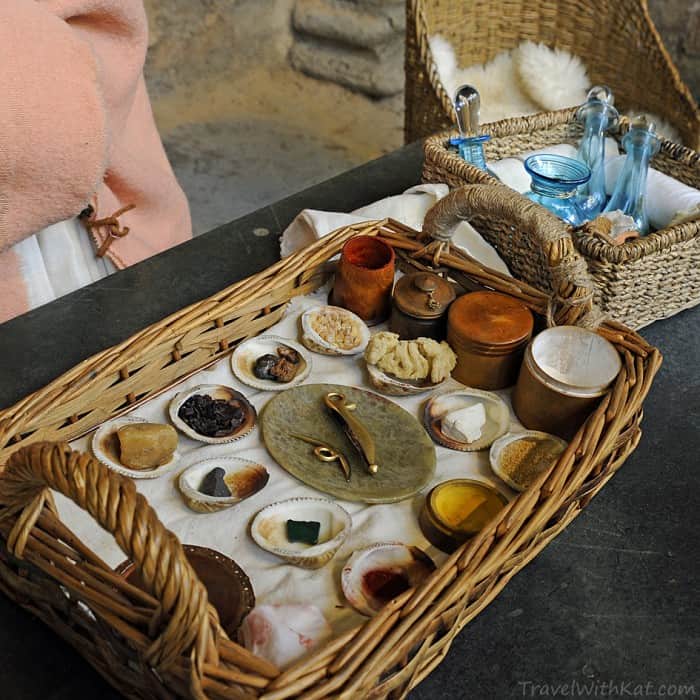 I had two hours left to explore more of the city and grab some lunch. One of the many things I loved about Bath on previous visits was the 18th century Pulteney Bridge, with its quaint little row of shops over the arches of the bridge spanning the River Avon. Again it was much as I remembered and as charming as ever.

View towards Pulteney Bridge over the River Avon 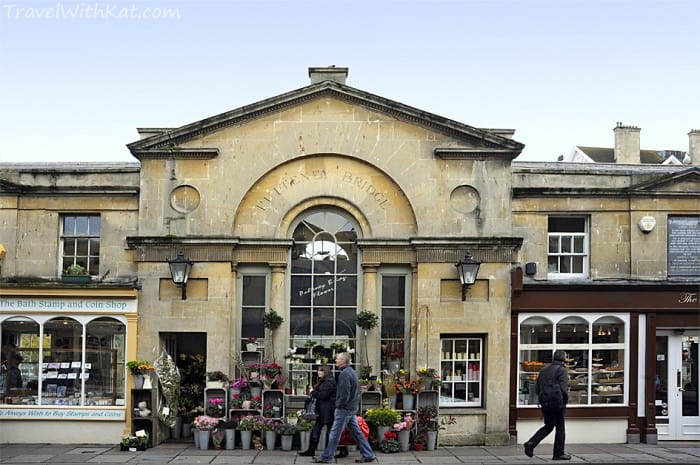 Just a few minutes’ walk from Pulteney Bridge, I found a wonderful place for lunch, the Best of British deli on Broad Street, selling homemade quiches, sandwiches, soups, cakes and pies all made on the premises using finest British produce. My organic Bath blue cheese with red onion marmalade sandwich really was the best I have had for a very long time and I’d highly recommend a visit here. 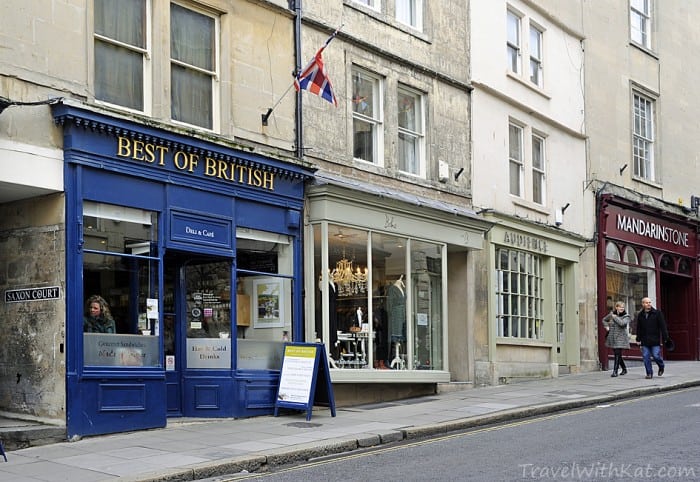 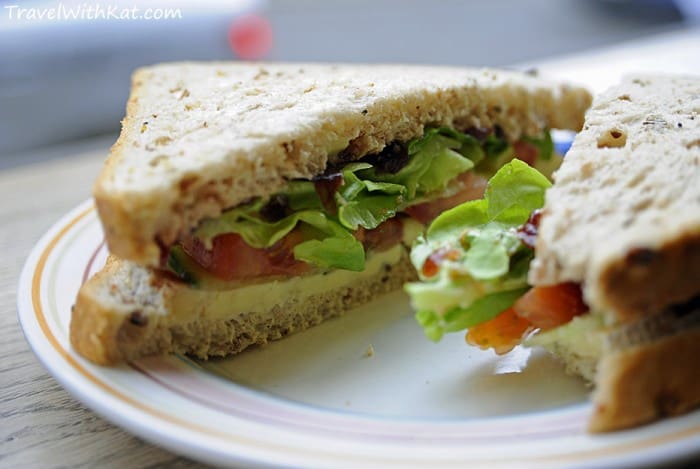 Other great places to eat include the famous Pumps Rooms next door to the Roman Baths. This place is always popular so you may have to wait for a table, but it is the perfect setting in which to sample a traditional English afternoon tea in very grand surroundings.

If you are looking for a quick snack or something to take home for supper, visit The Bath Sausage Shop on Green Street. They sell a wonderful range of sausages made, wherever possible, with free range GM free meat plus a selection of the tastiest sausage rolls and pies imaginable. 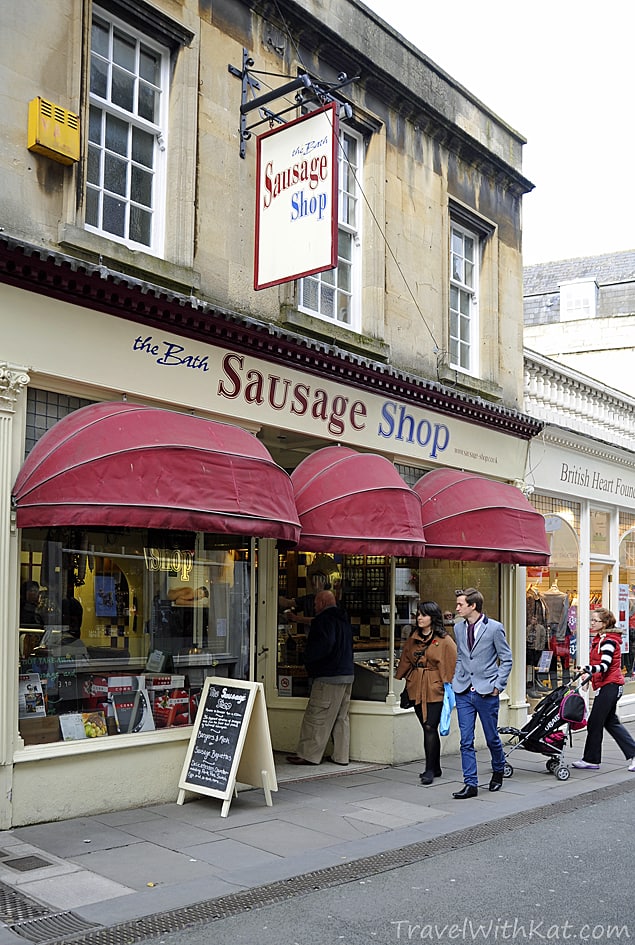 Before I left I still had a little time to wander around the quirky independent shops that Bath is known for and do some Christmas shopping.

Sadly I was too early for the Bath Christmas Market which is reputedly one of the best in England and runs from 22nd November until 9th December.

You can still take advantage of Bath’s natural hot springs today by visiting Britain’s only thermal spa. I would dearly love to try out their stunning open-air, rooftop pool. For more information visit their website.

How to get there

There are regular trains to Bath from London’s Paddington Station. The journey takes around an hour and a half and costs about £50. The town centre is just a short walk from station. You can find train times and prices at the National Rail Enquiries website.

More details about how to get to Bath can be found here.

I visited Bath as a guest of Viator on their day trip from London which also includes a visit to one of England’s most famous landmarks, Stonehenge.

With Halloween and Bonfire Night having come and gone, autumn will soon be turning to winter. While I love the...