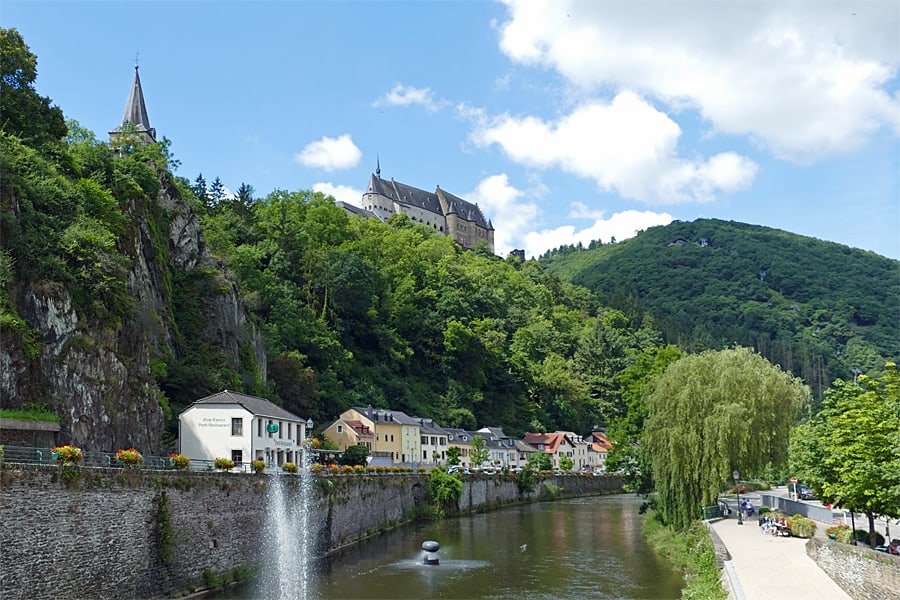 I recently spent a wonderful long weekend in Luxembourg exploring the city and a few of the many castles, found in the surrounding countryside, which was lush and green and very picturesque. Most memorable of all was the fairytale castle of Vianden. 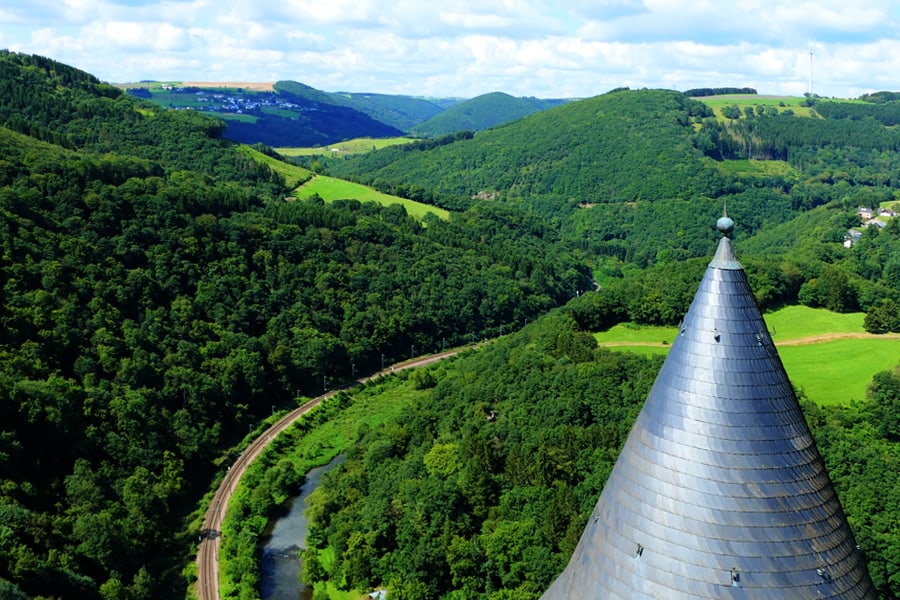 above: view from Bourscheid Castle in Luxembourg, below: Luxembourg City 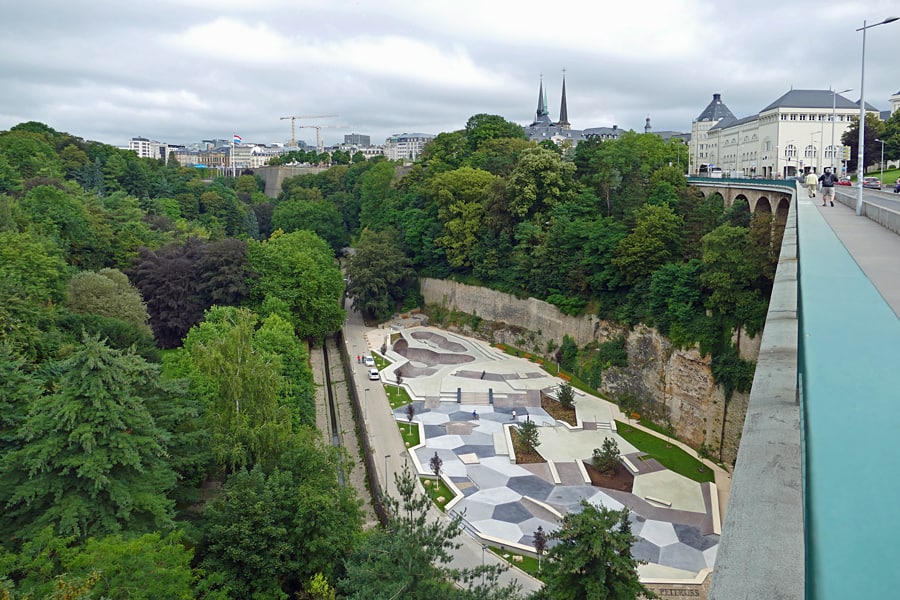 Luxembourg City was surprisingly green too, with woodlands and parks. The old town, a UNESCO heritage site, was fabulous to explore. In contrast, there is also striking modern architecture to be found. 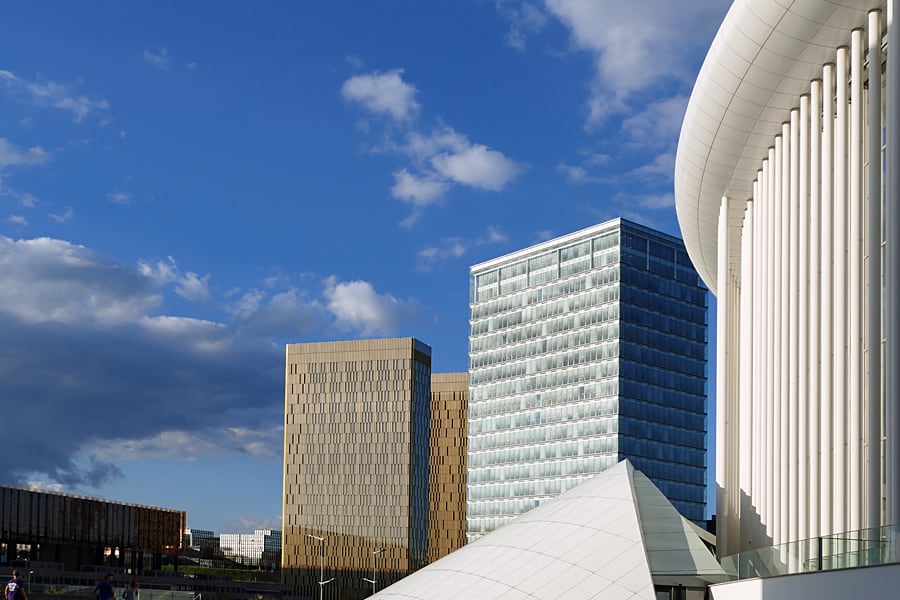 The highlight of the weekend for me though was the pretty town of Vianden, with its impressive medieval castle, perched on the wooded hillside looking down on the town far below it.

Following a hearty breakfast at the cosy Hotel Pétry, I set out to visit the spectacular castle. It dates back to the 11th century but had long since fallen into ruin. When left to the State in the 1970s, extensive restoration began and is now almost complete. From my hotel it’s a short walk to the chairlift that will take me up the hillside for what I’m told are glorious views. The clouds are thinning and there’s a patch of blue. After a very hazy start, I think it’s going to turn out to be a lovely day. 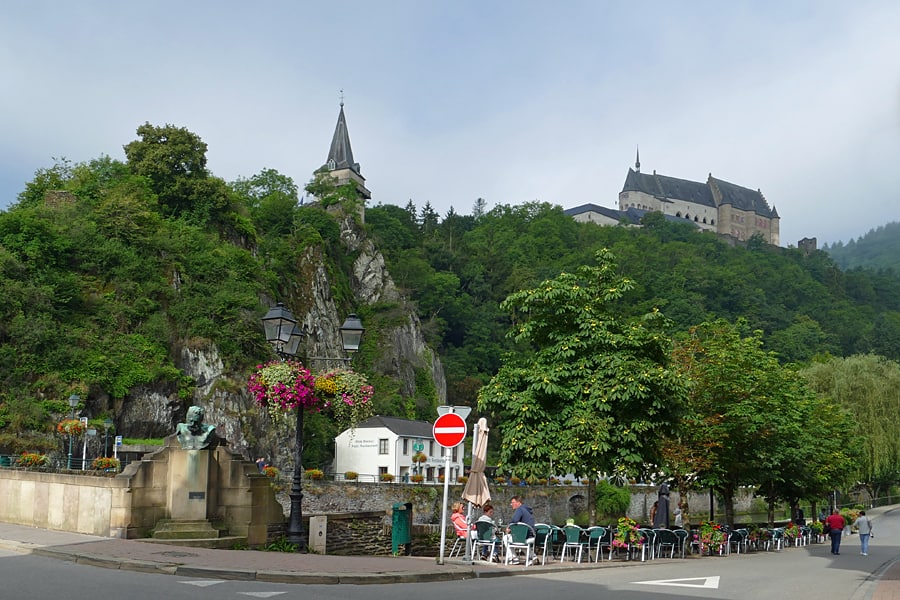 I’m feeling a mixture of excitement and nerves as I stand in line, carefully watching just how you get onto the chairlift. They frighten me. Irrational maybe, but true nevertheless. I’ve always imagined that I’d fall off or somehow get stuck as I try to get down. And for 51 years I’ve managed to avoid them. I’m determined to change that today!

I stand at the front of the queue as they load crate after crate of canned drinks on to the chairlift instead of me, but at last it is my turn. Before I know it I’m heading up the hillside, across the River Our and up above the trees. It’s wonderful and the views down the valley, when I dare to turn round, are beautiful in the hazy sunshine. 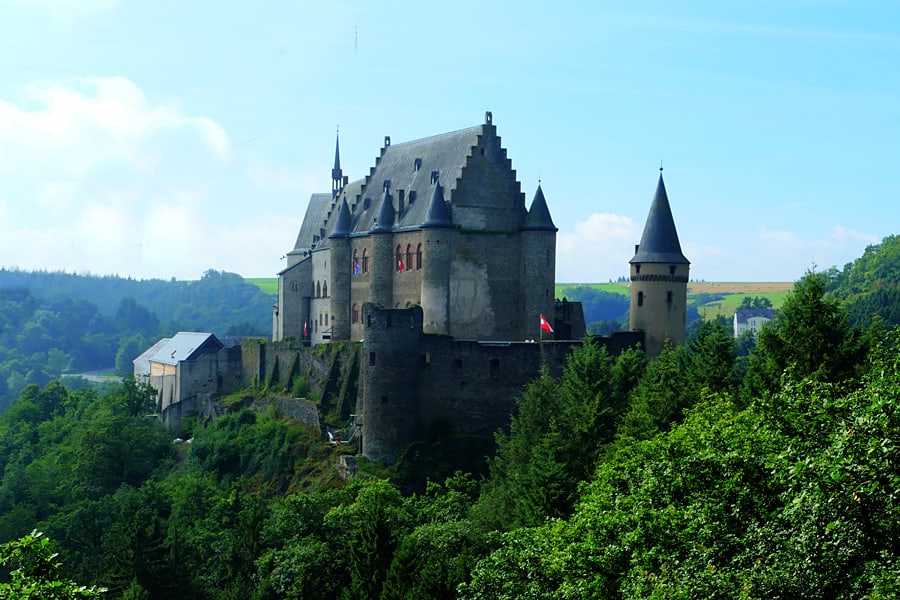 As I climb up into the air the castle rises up before me with a spectacular expanse of blue and a few wisps of clouds as a backdrop. Onwards and upwards I go, now above the castle, as the chairlift approaches the top. 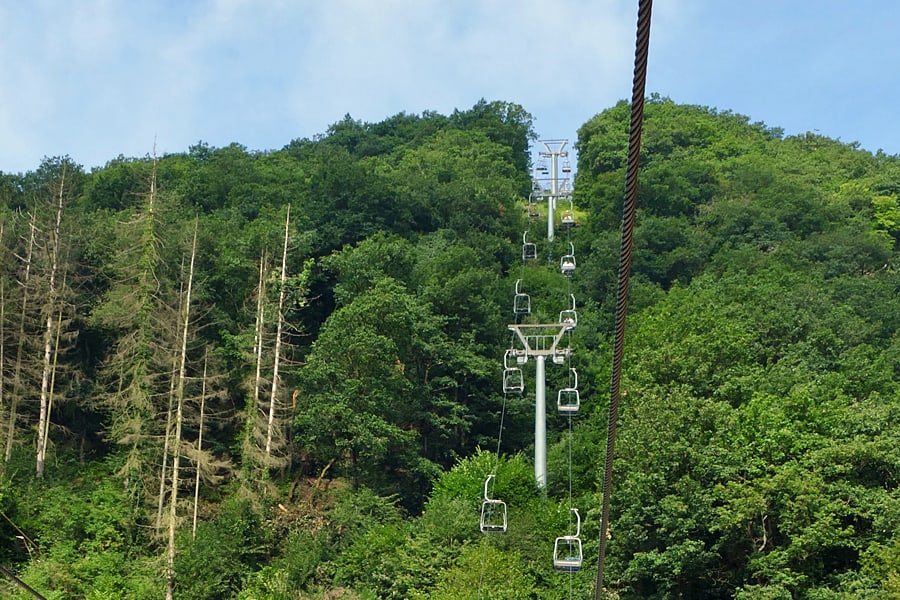 I was planning on watching how the people in front of me dismounted but the crates of fizzy drinks aren’t much help. Of course, all my worries are unfounded and I hop off the seat without falling over or strangling myself with the shoulder straps of my bags.

The reward is as stunning as promised, as I look past the castle turrets and along the river valley. I had no idea that Luxembourg was so very beautiful. 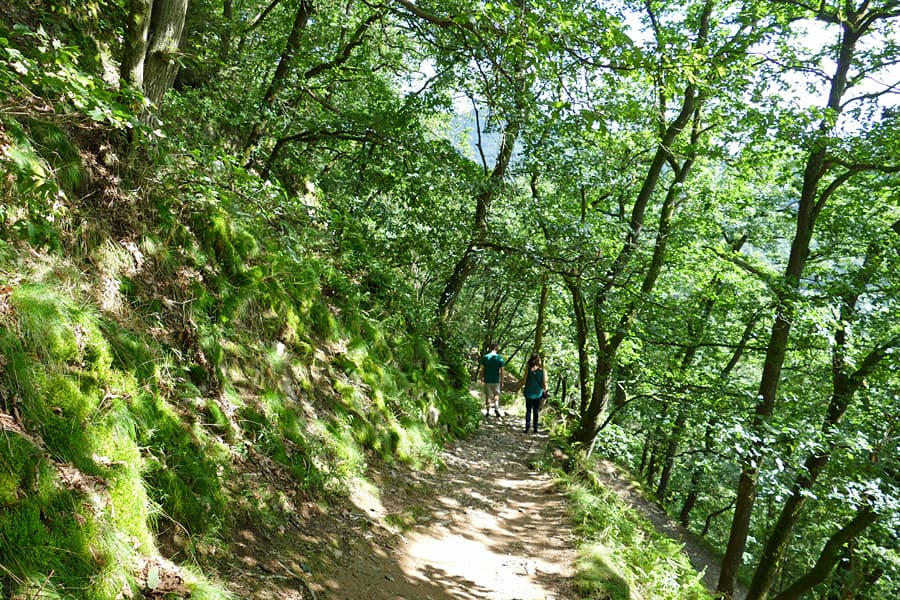 A path winds down through the woods – a lovely walk in the dappled sunshine. I catch glimpses of the castle through the trees as I make my way to its entrance. 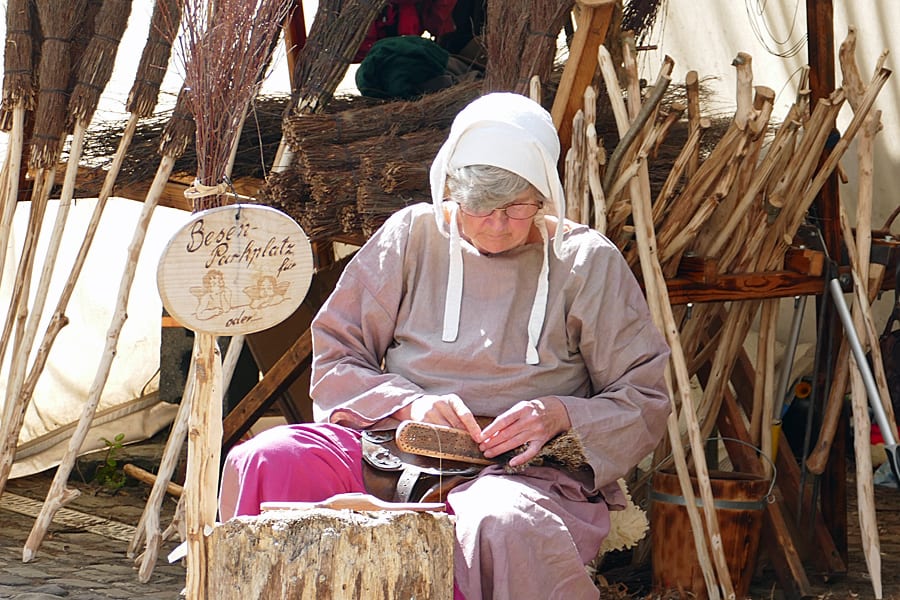 Inside the castle gates the annual medieval festival is in full flow with stalls and craft demonstrations, birds of prey, archery, and sword fights. Music fills the air as I explore. 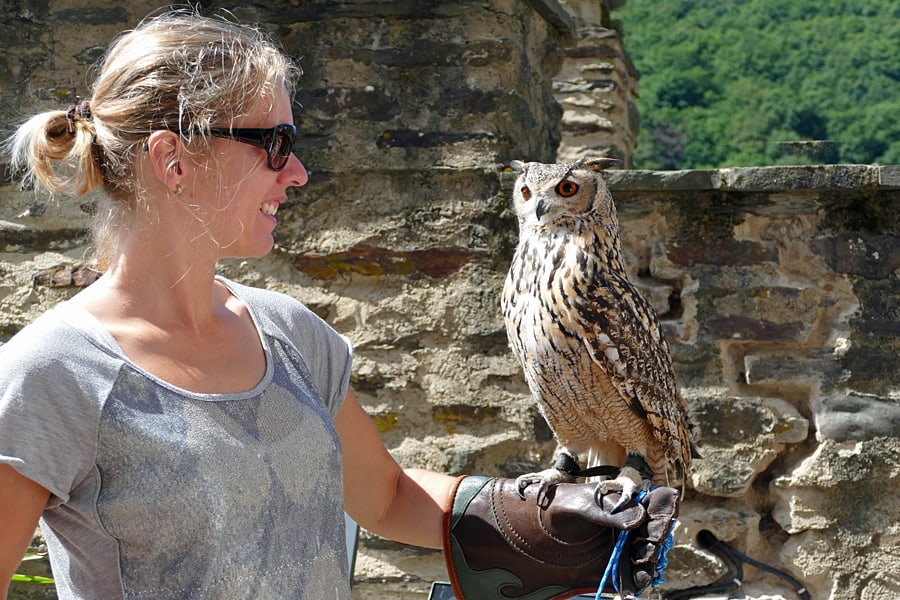 A flight of stairs brings me to the tavern in a cool vaulted cellar. A pint of local beer with Bratwurst (traditional sausage) in a roll makes an inexpensive and tasty lunch. 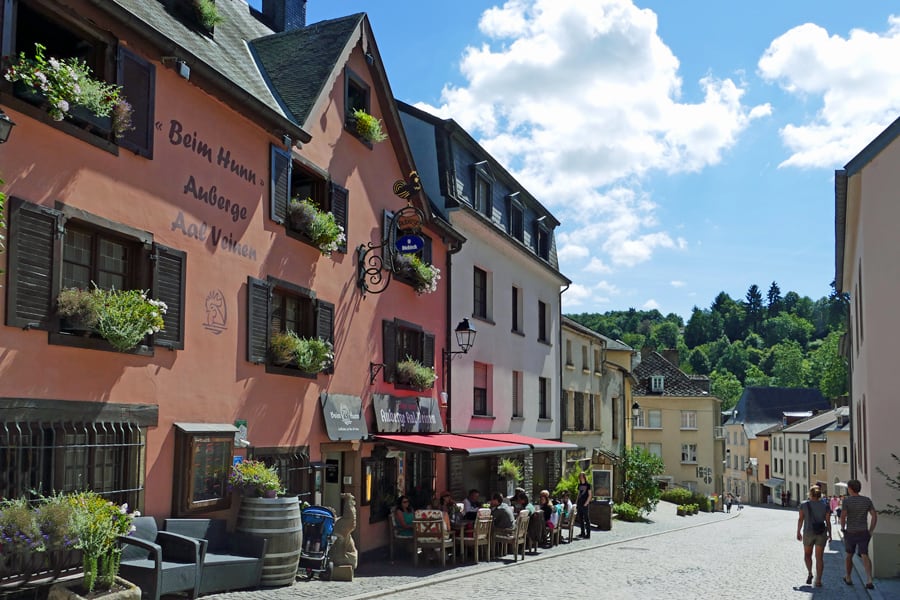 It’s an easy walk back down to my hotel, passing the Auberge Aal Veinen Beim Hunn, a cosy rustic restaurant where we’d eaten a fabulous meal the night before. Steaks are their speciality and I can certainly recommend them. The town is looking very pretty in the sunshine, nestled in the Our Valley on the banks of the river of the same name, the impressive castle, high above it, standing sentinel.

Entrance to Vianden Castle is normally free with a Luxembourg Card (but not when the festival is on). The card offers free access to over 70 museums and tourist attractions and free travel on the trains and buses throughout the country. 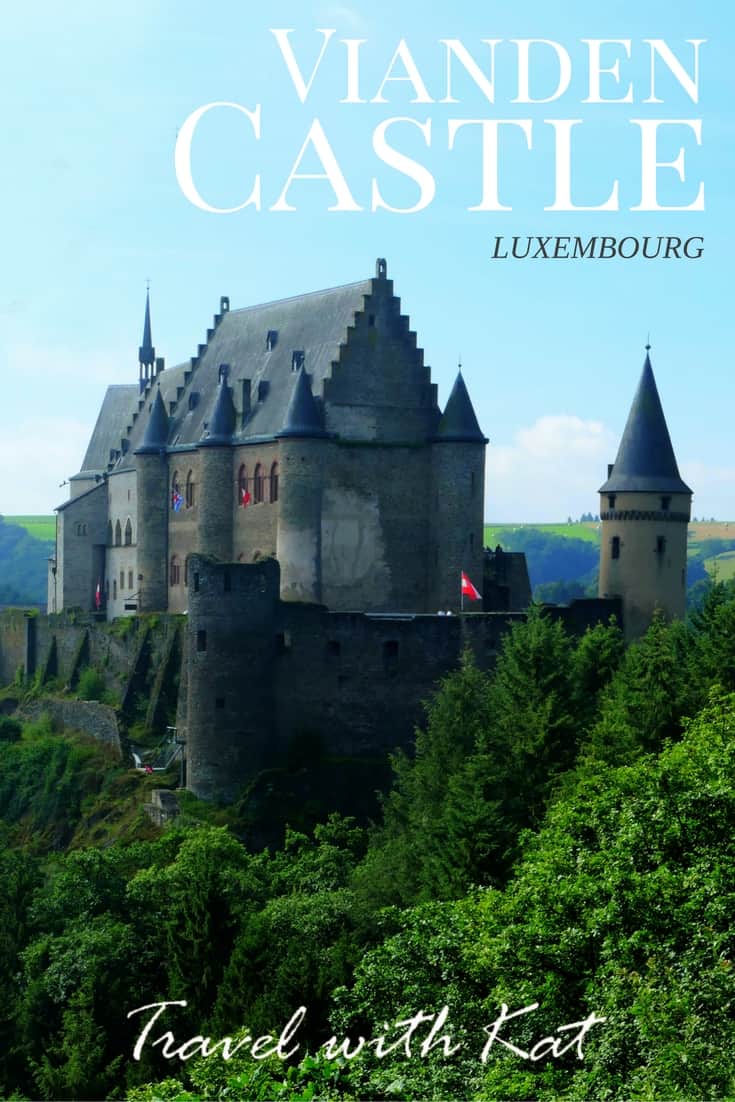 Thank you to Visit Luxembourg for sponsoring my visit to Luxembourg – a wonderful introduction to a beautiful country with so much more to offer than I had realised. I look forward to returning one day.

With over 2,000 buildings deemed worthy of UNESCO World Heritage status and my favourite beer in the world, join me...