So remote that it’s often left off the map, Ile Rodrigues in the Indian Ocean has little in common with its glamorous big sister, Mauritius. ‘Sleepy’ and ‘laid-back’ are appropriate adjectives to describe this little island, except for today, that is. It’s the 1st March, a day celebrated every year as the start of the net fishing season with La Fête du Poisson.

Earlier this morning I waded through the water of the shallow lagoon that surrounds Rodrigues Island and climbed aboard a small boat. A light rain fell as we raced across the clear turquoise water towards a distant rainbow. It’s only after travelling for an hour or so that you start to appreciate how large this lagoon is. The main island of Rodrigues, together with 18 or so smaller, uninhabited isles is surrounded by a coral reef, beyond which lies the vast expanse of the deep blue ocean. Inside the lagoon formed by the reef, however, the water glistens in the sunlight in shades of pastel green and blue.

Each year, as the octopus season comes to an end, the net fishing season begins, a system introduced in the battle to maintain the sustainability of both.

As we reach a smattering of tourist boats bobbing in the water there’s a growing excitement in the air. While octopus fishing is the domain of the women of Rodrigues, net fishing is a man’s world. Traditional fishing in the lagoon uses a collective of fishermen working as a team. A line of fishing boats, each with three or four men on board, starts moving forward. Some men use wooden poles to push the boats along through the shallow water while others bang the sides of the boats with the poles. The colours of the sea and sky, the rhythmic drumming, the anticipation – the scene before me is mesmerising. The boats close in on a huge net laid out in a semi-circle. As the fish flee from the sound of the banging thundering through the water, they unwittingly head straight for the net. At least that’s the theory.

La Fête du Poisson (Fish Festival) is celebrated on Rodrigues Island annually on 1st March. Each year it is in a different location.

This morning, the first run on the fish bears little fruit but no one seems too concerned. The fishermen will simply move the nets and try again. We take advantage of the break in activity to stop for breakfast flakes of bekin fish stuffed in a baguette with chopped tomato and red onion, salt and a little lemon juice. It’s even more delicious than I expected!

The second fish run begins. As the boats close in, it’s clear that this time it has worked. Fish jump wildly in the attempt to leap out of the trap. A few lucky ones make it to freedom and I can’t help giving a little cheer inside at the sight of each successful escape (despite knowing that I’ll soon be tucking into one of these fish). The fishermen are soon pulling in the nets and the catch within them, filling the floor of the boats with silver fish. 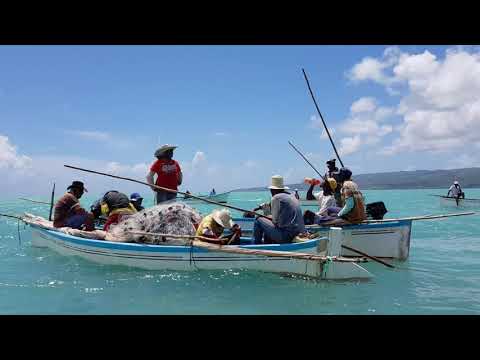 We follow the boats back to shore, as hundreds of people are gathered by the water’s edge to see the first catch of the year brought home. Some of the fish are distributed to the collective’s members. The remainder is cooked under a marquee close to the beach and locals with a smattering of visitors tuck in.

Over the coming week I munch my way through plenty of tasty, fresh fish and seafood from the Indian Ocean, including fish rougaille, a popular Creole stew made with tomatoes, onion, garlic and thyme, and a delicious octopus salad (you can find the recipe here). It’s hard to pick a favourite but the salade marlin fumee (smoked marlin salad) I had at Restaurant le Marlin Bleu and the gratin de fruit de mer at Chez Paulina’s, a cosy little restaurant up in the mountains, together with the bekin baguette at the festival, are all vying for the number one spot. Any fish lovers who enjoy getting off the beaten track should head to Rodrigues now, before the rest of the world discovers this sleepy island paradise. I can’t help but hope it stays off the map a little longer.

Want to know more about Ile Rodrigues? Check out my post Rodrigues Island: Getting off the beaten track in Mauritius


Pin it for later!