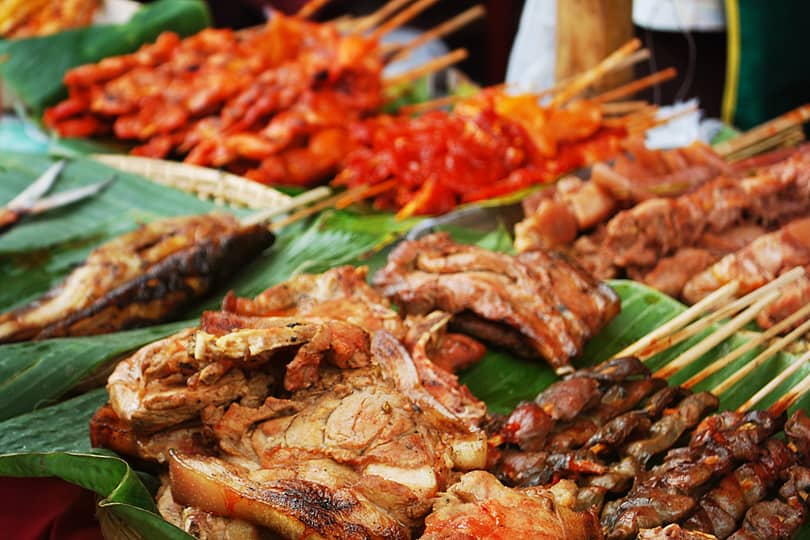 Today I’d like to introduce you to Andy Nixon, my latest guest blogger in a series on street food from around the world.
Next stop, the Philippines.

Filipinos pride themselves on their street food; it’s an expression of their culinary artistry, albeit by the side of a road. At a low price, locals and visitors alike can sample a host of delights from such stalls and they are a welcomed respite to the endless Jollibee fast food outlets that litter the streets of Manilla and much of the Philippines.

Here’s my mini guide to some of the street food you are likely to find. Unfortunately, if you aren’t fond of deep fried food, then you may well be in a spot of bother. Filipinos love to fry food. It’s like it has been ingrained into their culture.

Kikiam – A perfect example of the Filipinos’ love of fried food, this a deep-fried mix of pork and vegetables.

Kwek-kwek – A deep-fried quail egg and a very popular dish in the Philippines.

Turon – A sweet banana egg roll that also happens to be, yes you guessed it, deep-fried.

Although it doesn’t sound particularly appetizing, this is in fact one of the most popular snacks. It’s also quite pleasing on the eye, too. It looks like a kebab on a stick that has been cooked on a BBQ.

Balut – Not for the squeamish, this is a three-week-old boiled duck egg.

The embryo in balut has usually began to form as this is deemed the correct time to eat it. Full of protein, balut is one of the healthier of the street foods available, if you’re able to stomach it, and it’s said to be an aphrodisiac.

Now here comes the hard part, the actually eating it. You first have to drink the amniotic fluid from the egg – it tastes very much like warm soup and then devour the egg. There’s a possibility you could get a little bit of half-formed beak when you bite into the egg so beware. Balut polarizes opinion with expats and traveler’s so make up your own mind on the dish.

Sisig – Arguably one of the tastiest dishes in the Philippines, sisig is a combination of pork, chicken or tuna with onions, chili, calamansi and egg that is fried on a hot plate. Although not all street vendors sell sisig, if you get chance to sample this authentic Filipino dish, don’t pass it up.

Maruya – Translated this means banana fritters. The banana is dipped in a mixture of egg and flour and then deep-fried. Once it is ready to serve, the fritters are then dipped into sugar ready for tasting.

If you can get away from the fact that the majority of dishes from vendors are deep-fried then you’ll begin to appreciate some of the more authentic Filipino dishes available. They make do with what is readily available to them, which is commendable and intuitive  Filipino culture.

If you are however worried about how good the quality of food from these vendors actually is in the city of Manila, When in Manila published a list of what they think are the best 13, which is definitely worth a read.

Like many Asian countries, the Philippines has some idiosyncrasies that to many Europeans or Americans may seem a little quirky so it’s well worth researching travel tips, rules and regulations, before your stay in what is one of the most densely populated cities in the world.

To get you started here are s few tips about arriving at Ninoy, Manila’s airport.

Andy is a travel enthusiast, currently in Asia, backpacking with a small group of friends and fondly trying local delicacies wherever he goes.