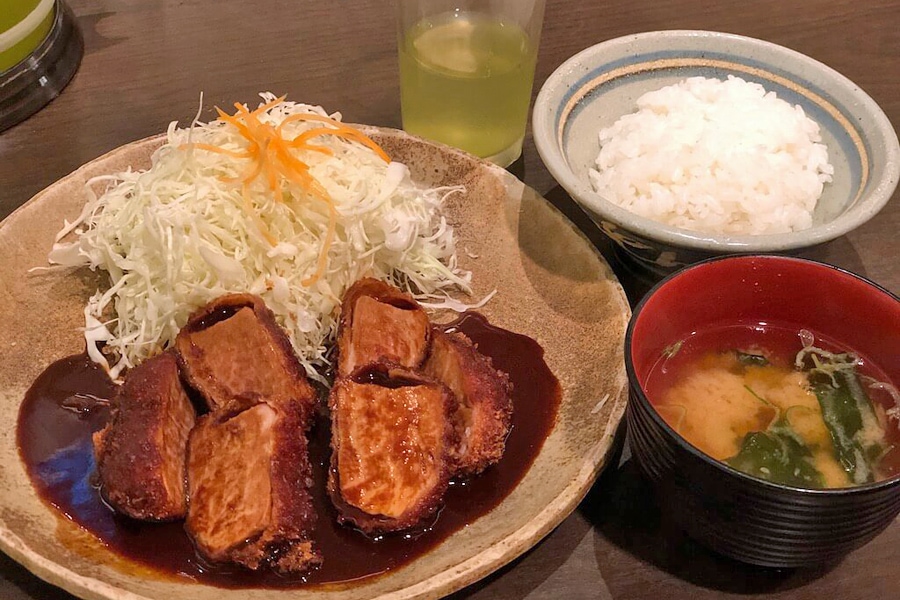 When I visited Nagoya, Japan’s third-largest city, I came across food I loved as well as food I hated. I regretted not having done my homework before I went. If only I had met Lena! She’s a real expert when it comes to food in Nagoya. In this guest post, she introduces you to the local Nagoya cuisine, firstly with five dishes every Westerner will love. Followed by five dishes that may seem a little less obvious but are nevertheless extremely good. It’s worth noting though, Lena’s told me, it is almost impossible to find Japanese food that is vegetarian or vegan. Over to Lena…

Foods in Nagoya every Westerner will love – and some you might not!

Japan has some crazy food; we all know it. They, for example, like to eat things raw we Westerners would never dream of eating uncooked. While most of us are quite accustomed to eating raw fish in a Japanese restaurant, uncooked eggs, chicken and horse meat, is not something we’d contemplate. The Japanese also like to eat all parts of an animal including heart, uterus and other internal organs.

These kinds of foods may be a step too far for most Westerners but many Japanese foods will be right up your alley. Here’s my guide about where and what to eat in Nagoya. You’ll find a map showing the locations of the restaurant mentioned at the end of this post. 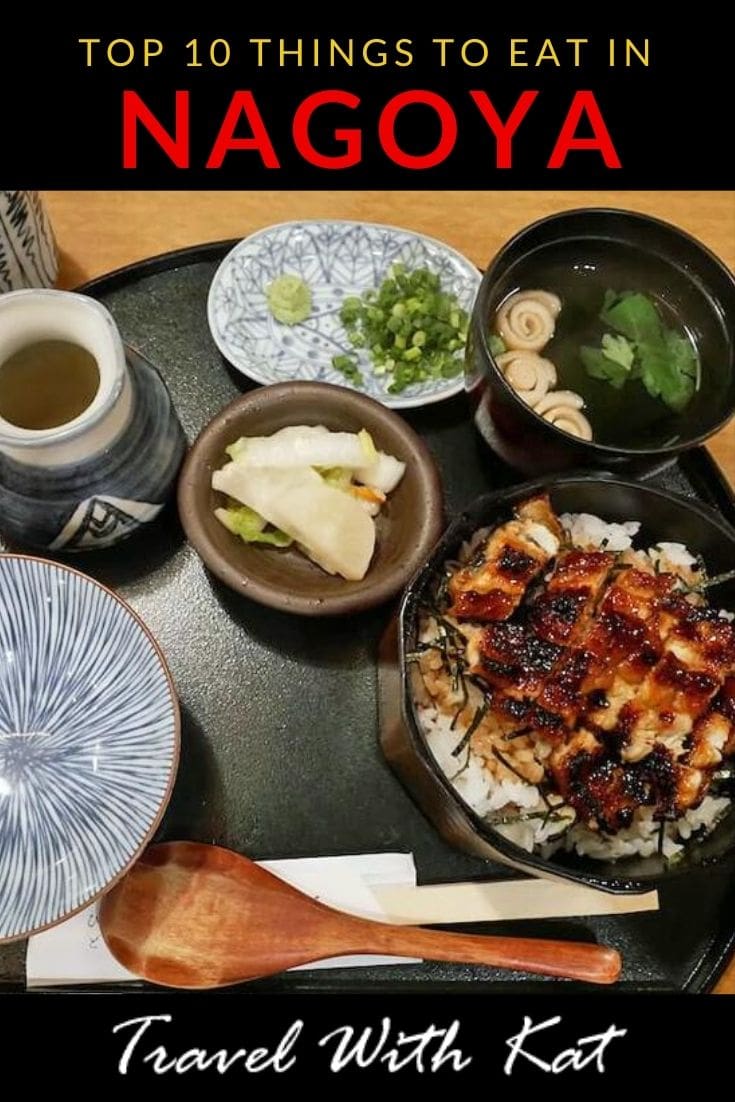 Nagoya and its food

Nagoya, known as the city of Samurai, is located right in between Tokyo and Osaka on Japan’s main island Honshu. The city played quite an important role in Japan’s history with many of the most important historical figures coming from the area. If you love history, castles, and Samurai, you’ll find plenty of things to do in Nagoya.

Nagoya is also famous for having a very unique local cuisine, called Nagoya Meshi. It mainly consists of strongly flavoured dishes, perfect for everyone who has ever complained that ‘Japanese food tastes too bland’.

5 foods in Nagoya you will Love

Let’s start by talking about the yummiest food in Nagoya and where to try them. These dishes are a hit with the locals, but most foreign visitors wouldn’t turn their nose up at them either.

The local interpretation of chicken wings is called Tebasaki. There are many different variations of chicken wings at the countless Izakaya (Japanese bars) but the most popular ones are the twice deep-fried peppery creations you can find at Sekai no Yamachan. They go particularly well with beer.

If you want to try some really up-scale Tebasaki you should check out Torigin. This restaurant specialises in Nagoya Cochin Chicken, a special chicken breed from the region. The breed is said to be particularly big, has pinkish-white meat, and is especially rich in Umami flavour, and high in collagen. 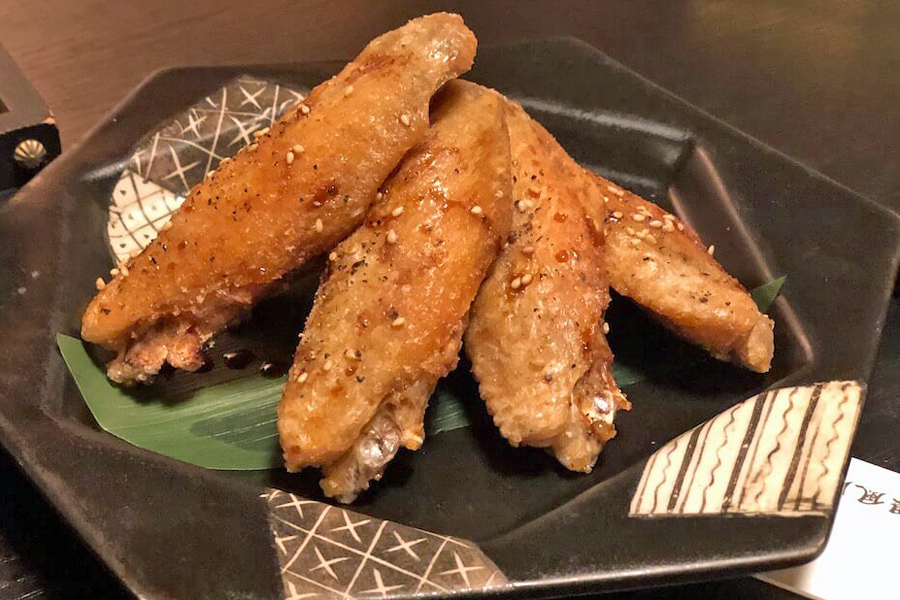 The people from Nagoya love shrimp so much they have made it their official’ Fish of the Prefecture’. In fact, its consumption is the highest in the country. If you love shrimp you need to try Ebi Furai (sometimes also written as Ebi Fry) deep-fried shrimp.

You can get especially delicious Ebi Furai at Maruha Shokudo where you will be served a Teishoku (a set meal) consisting of rice, Miso soup, some side dishes like Sashimi, and Ebi Furai as your main dish. The Ebi Furai is crispy on the outside, and has a firm and crisp shrimpy texture on the inside.

If you are looking for the world’s biggest Ebi Furai, you will find it in Nagoya at Ebidote Shokudo. The world’s longest shrimp is consistently more than 30 centimeters long and really consists of only a single animal. Surprisingly, this gigantic deep-fried shrimp is not only incredibly big but also particularly delicious, especially if it is paired with the handmade tartar sauce the restaurant is famous for. 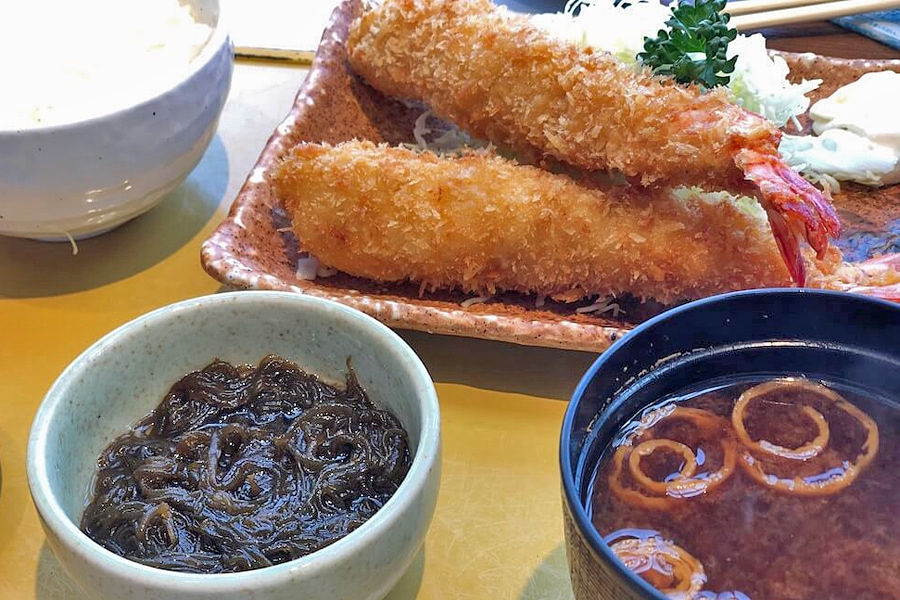 If you know anything about Japanese food, you might have heard of Udon noodles before. They are extremely thick white noodles made from only flour, water, and salt and can be served either hot as noodle soup or chilled with a dipping sauce. Kishimen is the local variation of Udon, but rather than being thick, Kishimen is a flat and broad kind of noodle. The different shape gives them a distinct texture.

The best Kishimen in Nagoya can be found at Miya Kishimen. They have multiple shops throughout the city but the one on the grounds of Atsuta Shrine really has the most unique atmosphere and is, therefore, my recommendation. Atsuta Shrine is the second most important Shinto shrine in Japan and the grounds are spacious and forested. After a stroll around the grounds enjoying the tranquil atmosphere of the shrine pop by Miya Kishimen to have some delicious freshly prepared noodles.

Some versions of Kishimen, especially the chilled ones with a dipping sauce, are suitable for vegetarians and vegans. 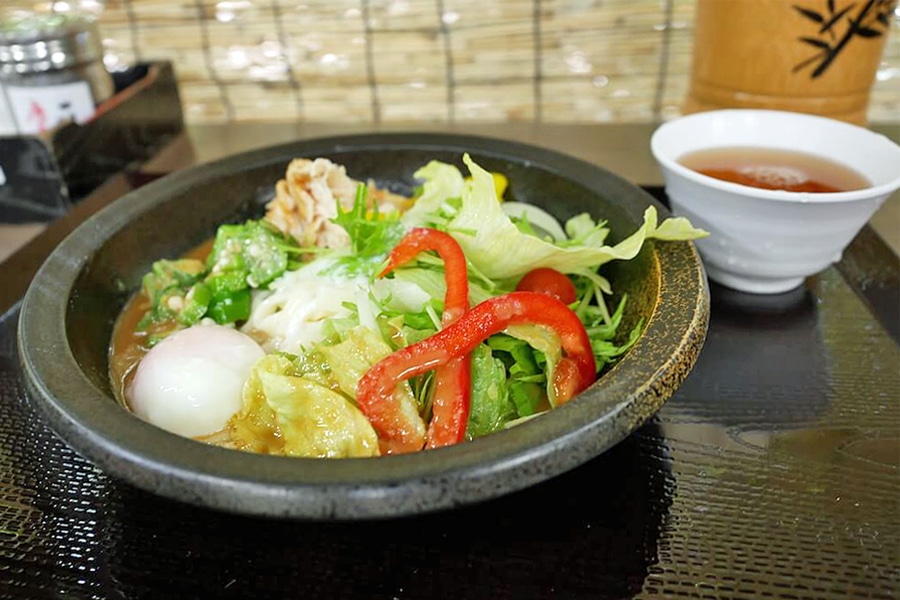 Talking about noodles, the people of Nagoya also love their pasta. They even created their own spaghetti dish called Ankaka Spaghetti. The extra-thick spaghetti noodles are served with a thick sticky and quite peppery vegetable sauce that has been stewed for many hours (or even days) giving it an exceptionally smooth texture. Topped with either stir-fried vegetables or sausages, this dish is especially popular with the hungry businessmen of the city as serving sizes can be gigantic.

The best restaurant to try Ankake Spaghetti in Nagoya is Spaghetti House Yokoi. It isn’t clear if they were the inventors of Ankake Spaghetti as multiple restaurants in Nagoya claim that title but the spaghetti here is delicious and they have been following the same recipe since the 1960s. 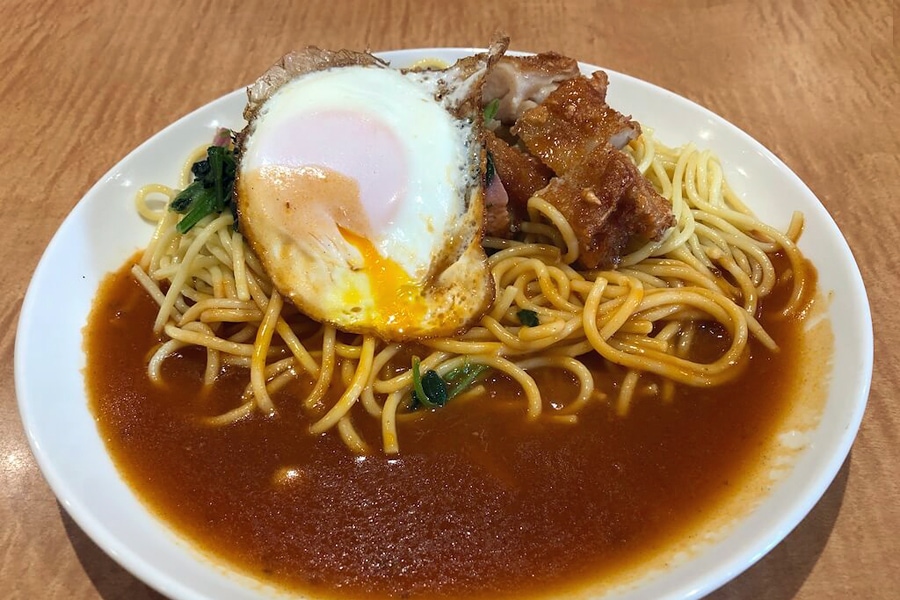 If you like spicy food you will love Taiwan Ramen, which by the way isn’t from Taiwan at all. The dish was invented at a Taiwanese restaurant in Nagoya and consists of Ramen noodles in a spicy soy sauce-based broth topped with minced meat and some spring onion.

The restaurant that invented Taiwan Ramen is called Misen, and it is definitely the best place to try the noodle soup. But it is not the only restaurant where you will find this dish on the menu. Actually, most Chinese or Taiwanese restaurants in the city now have their own interpretation of Taiwan Ramen on offer. 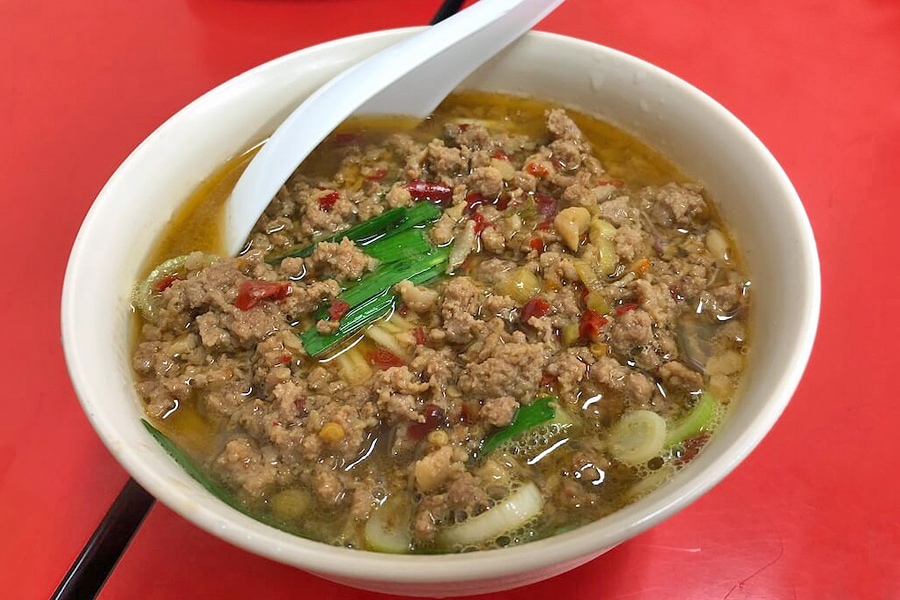 Now that I have introduced you to the five foods in Nagoya most Westerners will likely love, it is time to challenge your taste buds with five foods from Nagoya that, at first, might not sound so appealing. Nevertheless, I do encourage you to give them a chance as they might just surprise you with their unique flavours.

First of all, I would like to introduce you to the local breakfast toast of Nagoya. The locals love spreading a sweet red bean paste called Ogura-an on their extremely thick slices of toast. This creation is called Ogura Toast and while you might have difficulty imagining sweet red beans to taste delicious, they really do. It helps to imagine Ogura-an as a jam rather than bean paste.

The best place to try Ogura Toast in the morning with your cup of coffee is at Komeda’s Coffee where you will get a free Ogura Toast with the order of any beverage.

If you want to know what Ogura Toast tastes like right now you can join an Ogura Toast Online Experience where you can make the dish from the comfort of your own home while learning more about the dish and Nagoya. 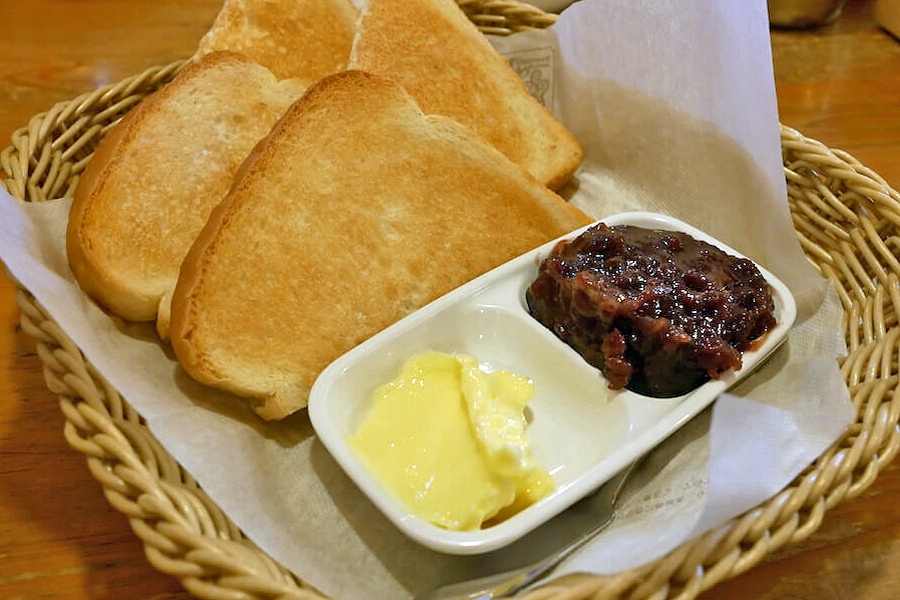 You might also enjoy: What is a traditional Japanese Breakfast?

I know the name Hitsumabushi is hard to remember or pronounce, so most foreigners who have tried and loved it refer to it as ‘the eel dish’. Hitsumabushi is a local delicacy made from grilled freshwater eel over rice. It is quite expensive but in my opinion worth every single yen.

The eel is served with a sticky and sweet soy sauce-based sauce, the eel is crisply grilled and the aroma of the Japanese white rice goes very well with the eel.

I recommend visiting Hitsumabushi Ino to try Hitsumabushi for the first time, as it is in a convenient location, the prices are more reasonable than other more famous restaurants, and in my opinion, the taste is superior! 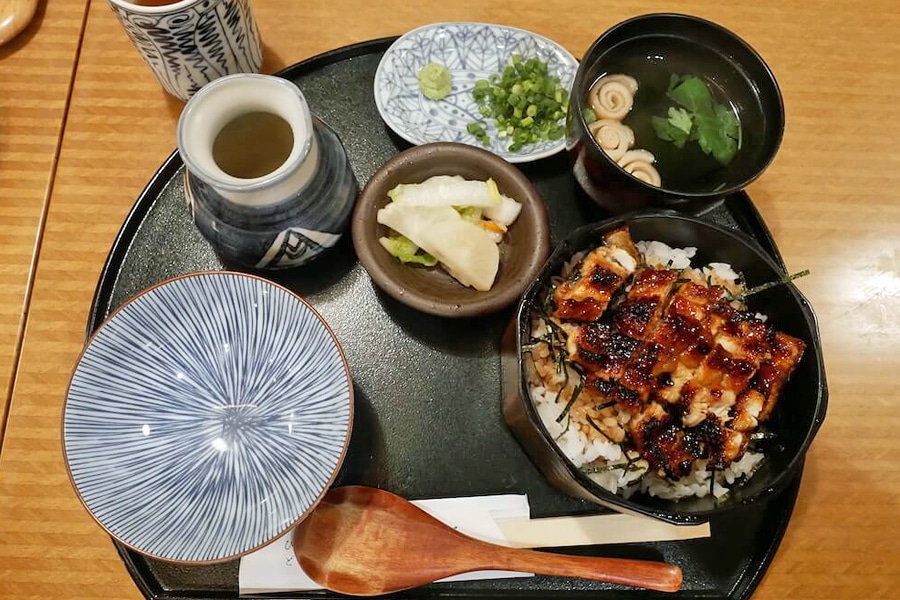 Miso is fermented soybean paste. Most foreigners know Miso only from Miso soup but it is actually used as an ingredient in other dishes as well. The people of Nagoya use a very rich dark-brown variety of Miso called red Miso.

Miso Nikomi Udon are Udon noodles stewed in a soup made from red Miso. While the dish doesn’t look all that appetizing because of the dark brown color it tastes superb and is especially great during winter when it is cold outside.

The best place to try Miso Nikomi Udon is Yamamotoya, a chain of restaurants that popularized the dish. 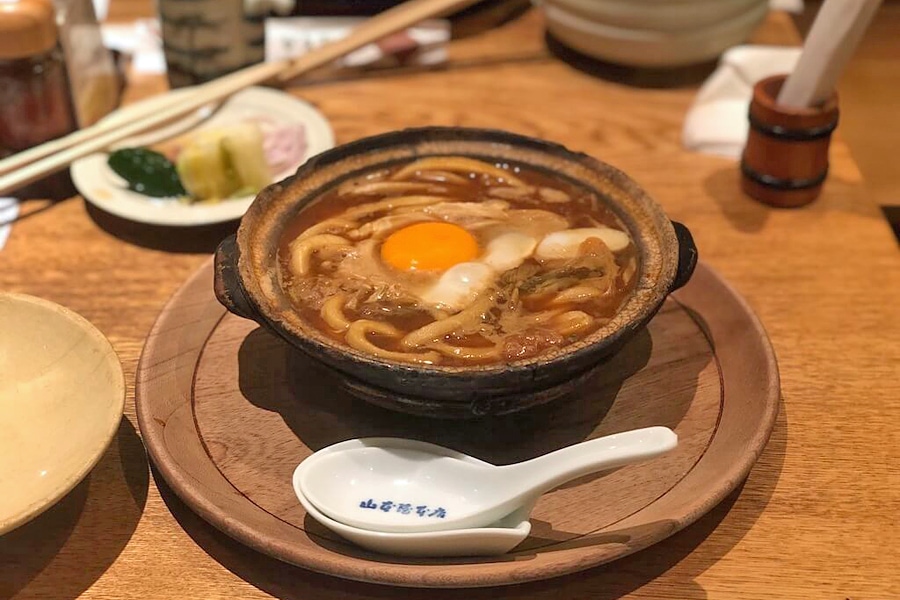 Another dish using red Miso is Miso Katsu, a deep-fried pork cutlet drenched in red Miso sauce. The meat is crispily fried and juicy on the inside and the rich flavour of the Miso sauce complements the dish. Served as a Teishoku with rice, Miso soup, and some side dishes it is a hearty meal that will satisfy you.

Misokatsu Yabaton is the restaurant you want to visit for your Miso Katsu fix. It is easily recognized by their mascot a pig wearing a red Sumo belt.

I talked about the love for shrimp in another section above. If you want to try something a little bit different made from shrimp, I encourage you to try Ebi Senbei, shrimp rice crackers. You might not be able to imagine these crackers to be any good (I wasn’t really convinced either the first time I heard about them), but when you take the first bite you will be surprised. The flavour of shrimp is very rich and the rice cracker is super crispy, making this a great snack for in-between.

More than 300 companies produce Ebi Senbei in the region, but the best place to try your very first shrimp rice cracker is Bankaku. Their most popular variety of Ebi Senbei is called Yukari and it is simply divine. 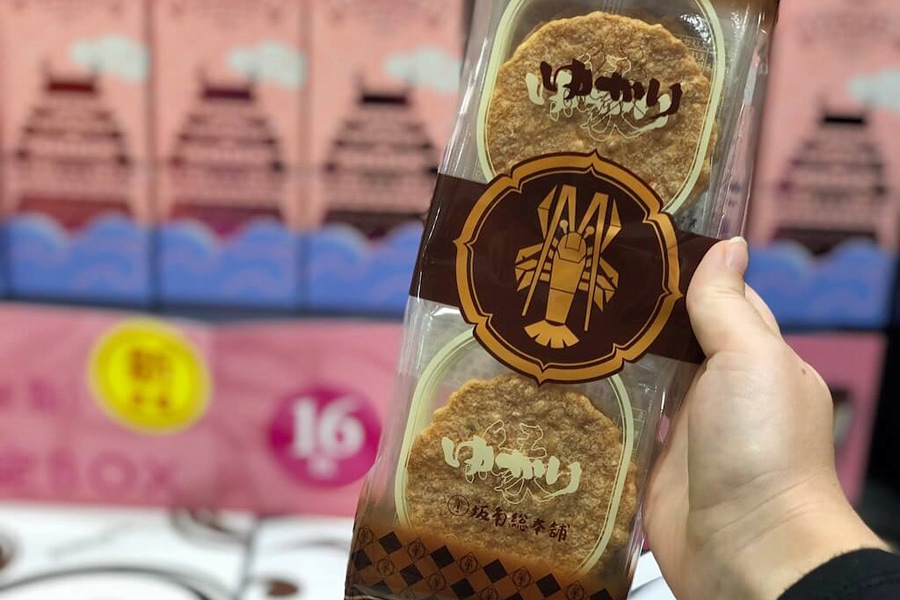 I hope this post awoke your interests in the local Nagoya cuisine. When you visit Nagoya, I encourage you to not only try the dishes that you think you will like, but also challenge yourself to try the more unusual kinds of Japanese dishes. Have fun exploring the wonderful range of food in Nagoya, it might surprise you!

In love with Japan and its fabulous food, Lena wants to share her passion with the world. Her goal is to make everyone interested in Nagoya, her adoptive home, online through her writing on Nagoya is not boring and offline through unique food tours.