Getting to know Jordan’s Bedouins 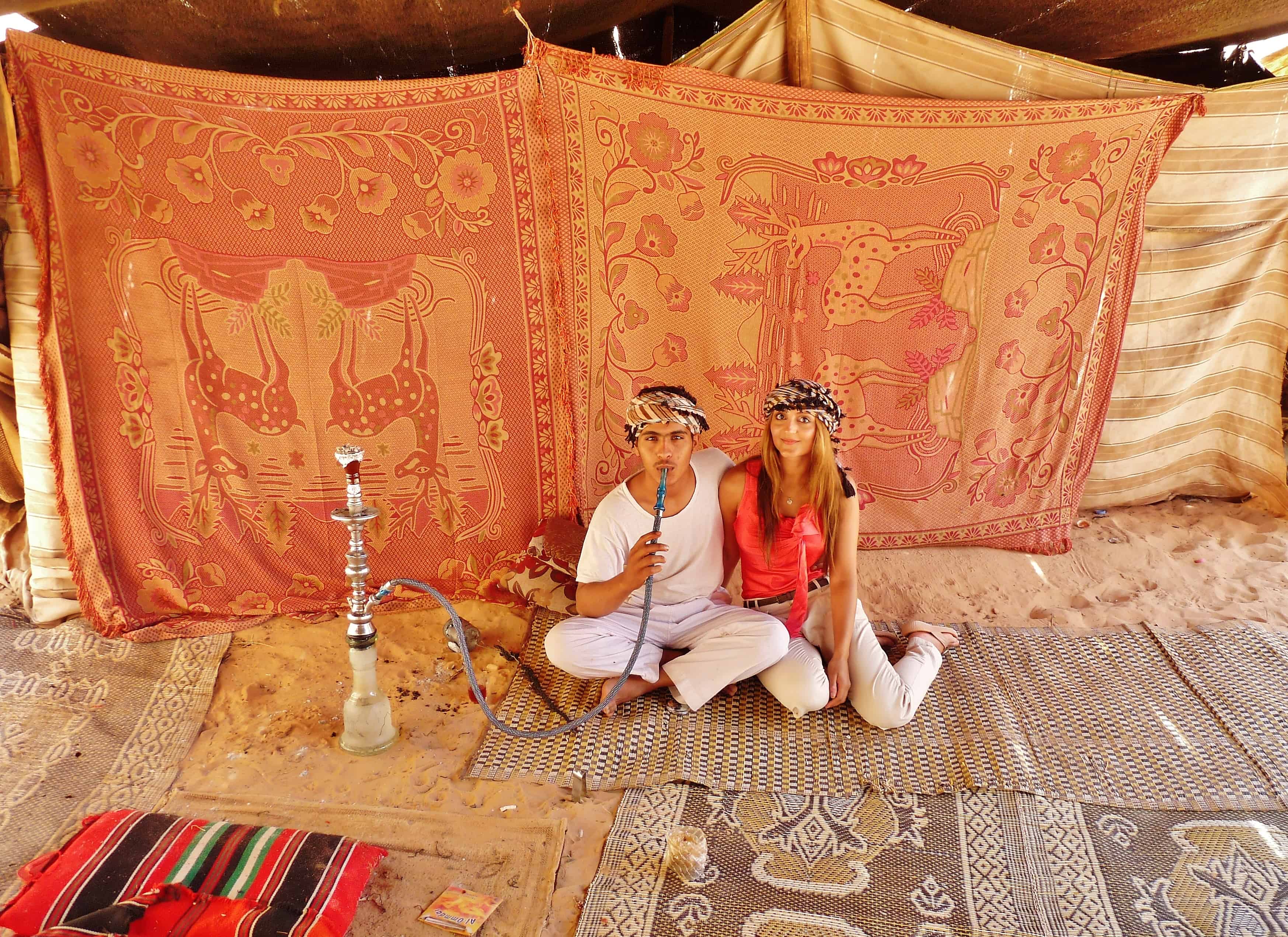 I’m delighted to host another guest post, this time from former broadcast journalist, Anisha Shah, about meeting the Bedouins in Jordan in the Middle East.

Getting to Know Jordan’s Bedouins

Jordan‘s Bedouin people are great story-tellers! They’re keen to help you experience their lands through their eyes – and I say, what better way?

With a history of tribal groups, living in tents and feeding from the land, the sands of Jordan are etched deep into their skin. Through hearing their music during the ‘Petra At Night’ excursion, sampling their food and drink in a village home and learning about their customs, I see the Bedouin as a people of pride and tradition fast adapting to modernity.

From the wilds of Wadi Rum‘s immense desert sands, to the sights of Petra, to being invited for tea, the people of Jordan are among the friendliest I have encountered. Thanks to the Bedouin who are part of my epic trip, I experience a unique and unforgettable taste of Jordan.

Mohammed is my Bedouin guide in Petra helping me hike to the Monastery and High Place of Sacrifice whilst sharing with me fascinating insights that make me both laugh and cry. Mohammed’s father had 3 wives; so he has a half-sister older than his mother! Later, I see the sorrow in his eyes as he describes his late Father, who passed away at the tender age of 103. After Petra, he invites me to his village home for tea and to meet his family.

Mohammed’s village, just visible as a row of houses in distance behind Petra’s sights

Mohammed lives in a Bedouin village, full of people that once inhabited Petra’s caves. The entire neighbourhood has been created for them with a school and other essential facilities. To get to it, it’s a mule-back ride through the wilds of Petra that most tourists will never see or know.

We pass hundreds of caves and many more tombs; these the Christian Tombs of Petra, that are remarkably out-of-the-way and challenging to access due to rough terrain. I cling onto my mule praying for the best!

The long road that passes behind Petra and leads to Mohammed’s village. It is sad to see some children missing school so that they can help their parents in the tourism industry.

Children are playing in the streets in his village. Toddlers waddle in the road alongside older siblings, donkeys and horses. The sense of community is stronger here than I’ve seen in years of travels.

I rest on cushions on the floor in his home which is minimally furnished. His wife brings fresh tea. This ritual is significant in Bedouin tribes; a show of trust, respect and friendship. Then comes something I’m not expecting… his youngest daughter brings in his laptop. Mohammed amazingly logs onto his Facebook site! I can clearly see how life has changed for the Bedouin in just one generation. Mohammed then leaves his mule at home to grab the keys to his Jeep. The Bedouin:  a people of living contrasts clearly adapting and undergoing an astronomic change in lifestyle.

Having left Petra, I take a day to explore the wilds of Wadi Rum, a deep valley carved through granite and stone, known as The Valley of the Moon and the land of Lawrence of Arabia.

The aphrodisiac powers of camel milk

I climb into a 4×4 for a Jeep safari through the desert. My Bedouin guide, Ali, bumps into his cousin in the village at the gates of the desert. The permeating chuckles trigger my curiosity. Afterwards Ali explains that his cousin has 3 wives and… 36 children! I’m amazed that’s even possible, which is when he reminds me of  the‘stimulating’ properties of camel milk! It’s touted across the Middle East as a potent aphrodisiac, ‘the natural Viagra’ (other brands also available!)

After a burst of giggling, it’s down to desert business.

4×4 ing, driving and pulling drifting stunts in the desert

The Jeep goes off-road and onto sand. Within seconds, the atmosphere transforms. The village is left behind with its noise, people and life. Wadi Rum is atmospheric and epic. The silence is profound. All I hear is the sound of the Jeep making tracks in the sand and my bottom sliding from side to side in the back. Before us, the red-yellow sands are infinite and vast, whirling up around the Jeep as it skids through.

I begin to panic a little as we head deep into the unknown. This is not just off-roading but venturing through unmarked, off-the-map territory. Losing my bearings is unsettling. But once I succumb to it, I begin to feel an incredible sense of freedom.

At this point, Ali takes the moment to show off his desert driving skills. ‘Hold on tight!’ I’m instructed. ’Uh-oh,’ I mutter under my breath.

He powers the car up and hits the brakes whilst throwing the steering wheel in the opposite direction. The car skids and drifts into that direction at high-speed, and almost lifts onto 2 wheels. He does this side to side! It’s a pure adrenaline-filled, thrilling experience. Buzzing from it, I ask if I could drive. To my surprise, he agrees!

There are 3 rules if I’m to drive in the desert:

1. Brakes are not allowed

2. Forget all I know about driving! On sand, it’s counter-intuitive.

3. No speeding or killing us!

Into first gear, foot down and I’m off. The wheels lose all traction and grip. The car is literally freewheeling. It’s simply surreal. How different this is to my real life! Ignoring all the ‘normal’ rules, I feel so free, so far from home, so far into nowhere… it’s unforgettable!

Sheesha with the Bedouin under a tent in the desert

During the Jeep safari, we stop to admire canyons and gorges. One such sight is a natural rock bridge formation atop a sheer cliff face. Many of the tourists that do make it out this far climb up to it for the photo opportunity.

As I start my climb, two friendly Bedouin boys, who live in a tent in its shade offer a helping hand. Their tent, pitched up in the midst of the Wadi Rum desert, where you could hear a pin-drop and there’s not a soul in sight, is too inviting. The silver of a sheesha waterpipe glimmers in the sunlight and I decide instead to invite myself in for tea.

The Bedouin boys are thrilled. Now shaded from the intense desert heat, I plonk myself down onto comfy cushions on the floor. Fresh mint tea is quickly brewed and as I sip it, looking out at the incredible vast desert surrounding us. I think how surreal this moment is.

One of them fires up the sheesha waterpipe – I watch as they smoke and we swap tales of travels in the Middle East. Conversation follows a labyrinth plots from sheesha to drugs to politics to philosophy. Instances such as this are the moments I crave when travelling; moments that stick in my mind for years; so unexpected but enlivening. I thrive off this. In this surreal moment, I feel strangely peaceful and content.

If you take a trip through Jordan, don’t pass up any opportunities to speak with the Bedouin people. Their knowledge and history will not only help you gain a deeper understanding of the country and it’s past and but also a glimpse into it’s future.

‘A Niche World’ by Anisha Shah

Having hosted her own BBC radio show to then being seen on TV News, most recently reporting on Olympic athletes as part of the BBC’s coverage of the 2012 games, Anisha has very recently turned freelance. Having already visited 50+ countries, she says her greatest challenge is accepting that she’ll never get to see everything in this world but that won’t stop her from trying!

“My travels are a contradiction reflecting my personality. I have a keen interest in areas of conflict (namely Bahrain during anti-government clashes, Sri Lanka during Tamil fighting and Lebanon’s Beirut, most recently). These things can happen almost anywhere and won’t put me off exploring a beautiful, historical and cultural destination.

I’m  also ‘obsessively’ keen on emerging destinations (my 2013 picks include South Sudan, Panama and Senegal). And you won’t find this traveller in sub-standard accommodation. My greatest love is the classically luxurious, boutique hotel.”