Visiting the Causeway Coast in winter 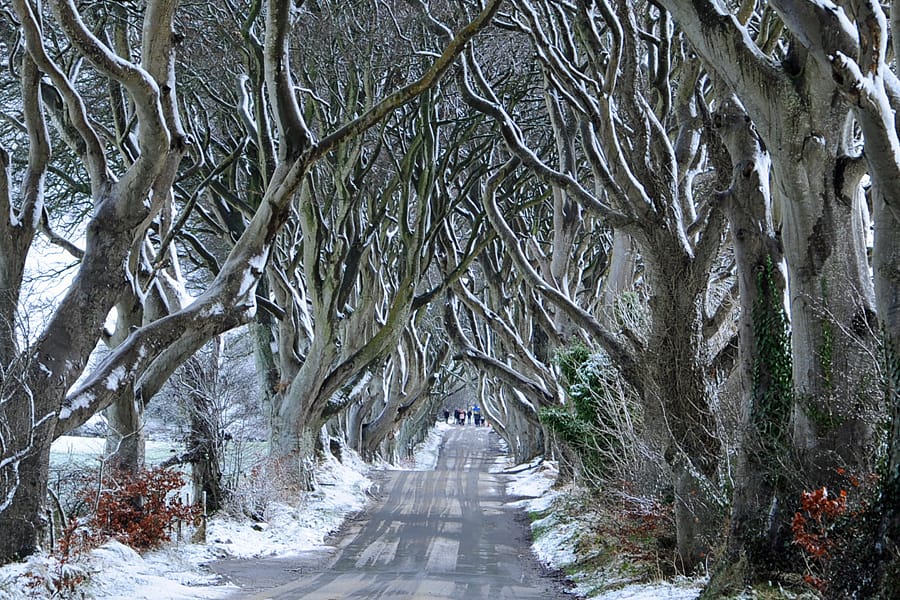 Any Game of Thrones fan would get excited at the prospect of exploring Northern Ireland – it’s scattered with dramatic filming locations, and is the undisputed birthplace of the most successful TV series ever. Even if you have never seen a single episode of Game of Thrones and never wish to, the beauty of Northern Ireland’s countryside and dramatic Causeway Coast is reason enough to set out on a road trip to the Emerald Isle. In winter, under a layer of snow, it is even more dramatic.

This post may contain compensated links. Find more info in our disclaimer.

The Dark Hedges aka the Kingsroad

As we leave the city of Belfast behind, the snow starts to fall. A blizzard is predicted and I’m torn between longing to see and photograph the Irish countryside under a blanket of snow and worrying that the roads will become impassable. We’re heading towards Larne, but it’s not long before we hear the road ahead is closed so, changing plans, we turn inland towards the Dark Hedges, the one thing that I long to photograph more than any other.

The snow is getting thicker and the car skids a little, but with Billy, our driver, I feel in safe hands. Passing through country lanes I pray for a break in the weather and just before we arrive, the snow stops and the sun makes a fleeting appearance. A fabulous avenue of twisted beech trees covered in a  dusting of snow stretches out before me. It’s notorious for being impossible to photograph because so many people visit it, but there is barely a tourist in sight. 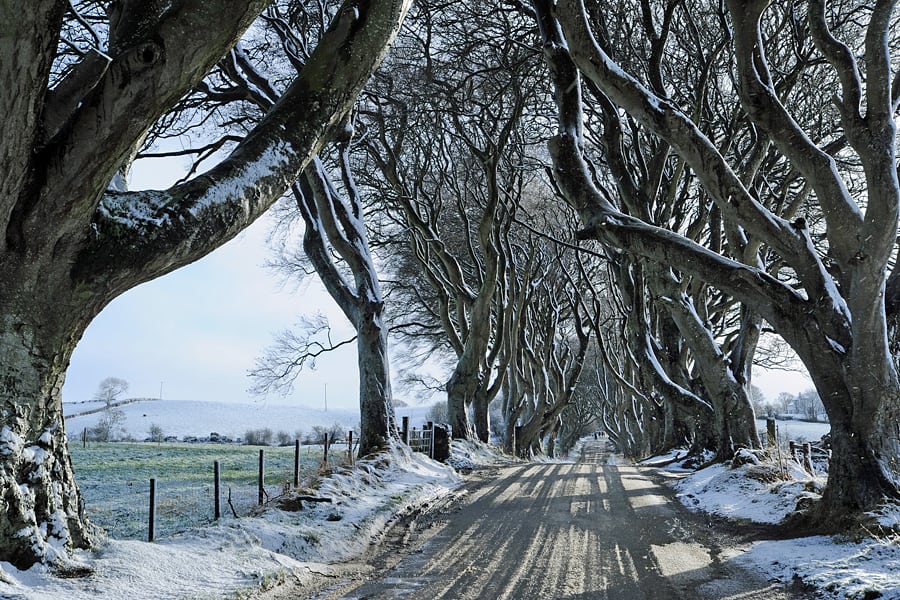 The avenue was originally planted by the Stuart family in the 18th century to form an impressive approach to the entrance to Gracehill House. Now it is a popular photo stop, even more so since appearing in HBO’s Game of Thrones as the Kingsroad as Arya made her escape from King’s Landing, following the death of her father Ned Stark (Season 2, Episode 1: The North Remembers).

Having taken far too many photographs, we jump back in the car and head to the coast. Sadly the Carrick-a Rede Rope Bridge is shut due to the weather and, after reading about it on The Quirky Traveller, I am very disappointed. 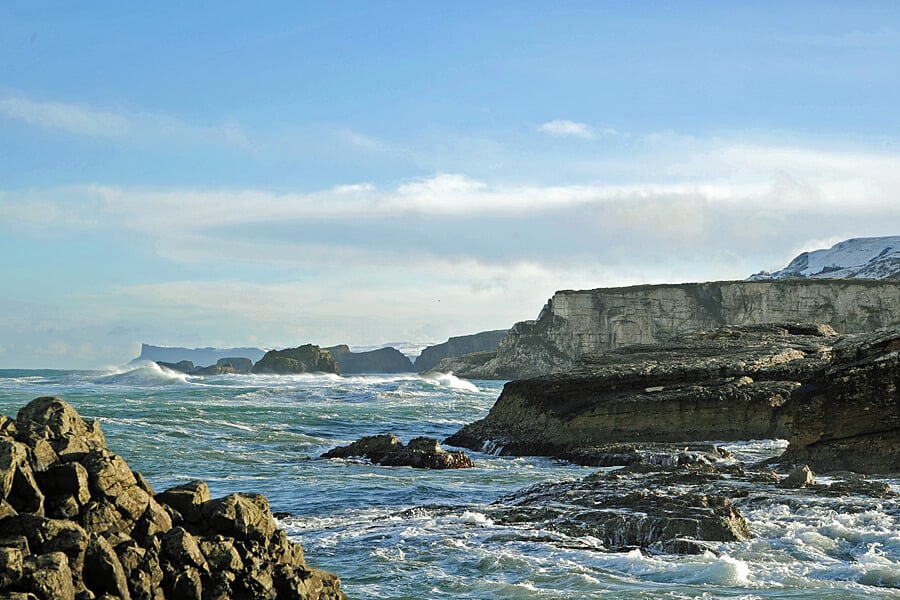 However, as we drive down a winding narrow lane, the wild coast comes into view. Huge waves crash against the rocks around Ballintoy Harbour. The sea is magnificent in deep shades of blue, grey and green with white horses galloping towards the cliffs. It’s freezing. It’s beautiful and mesmerising. When I mention that I could happily sit here in the car for hours, with a hot thermos and a view of the sea, Billy decides I’ve lost the plot! 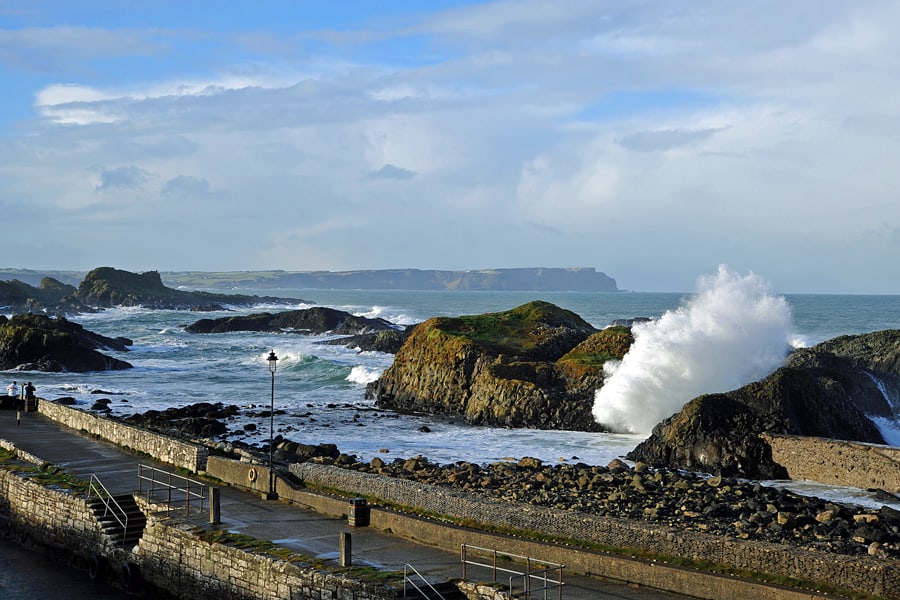 With an icy wind clawing at me, I try to capture its beauty with my camera. A number of scenes from Game of Thrones were filmed in and around Ballintoy Harbour. It first made an appearance in Season 2, Episode 2: The Night Lands as Lordsport Harbour on the Iron Islands. It’s a suitably impressive setting.

Read my Guide to visiting Game of Thrones filming location in Northern Ireland. 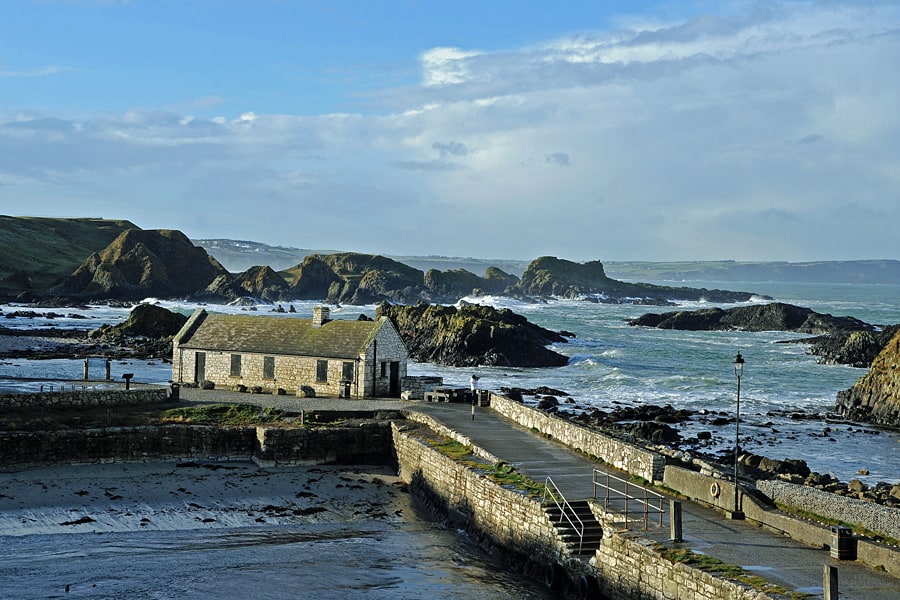 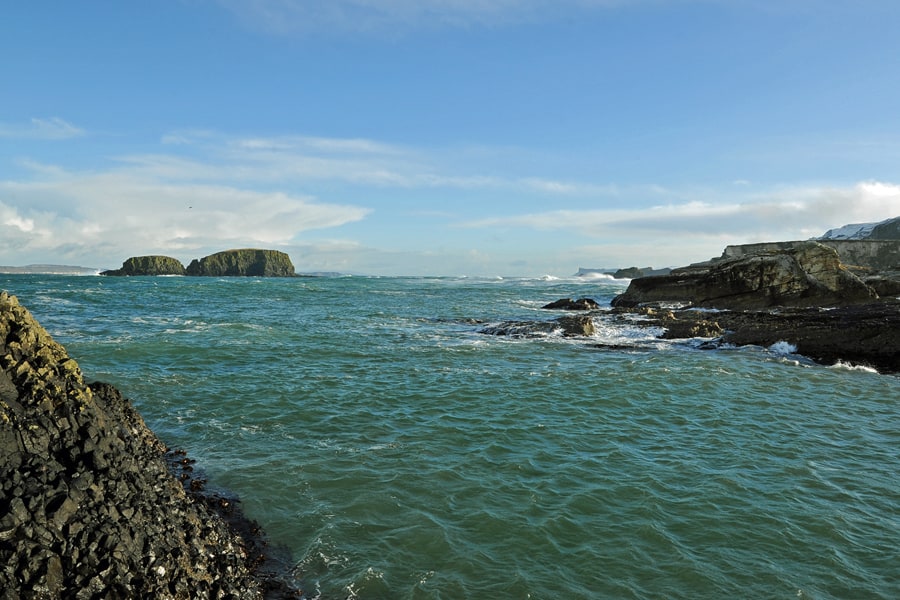 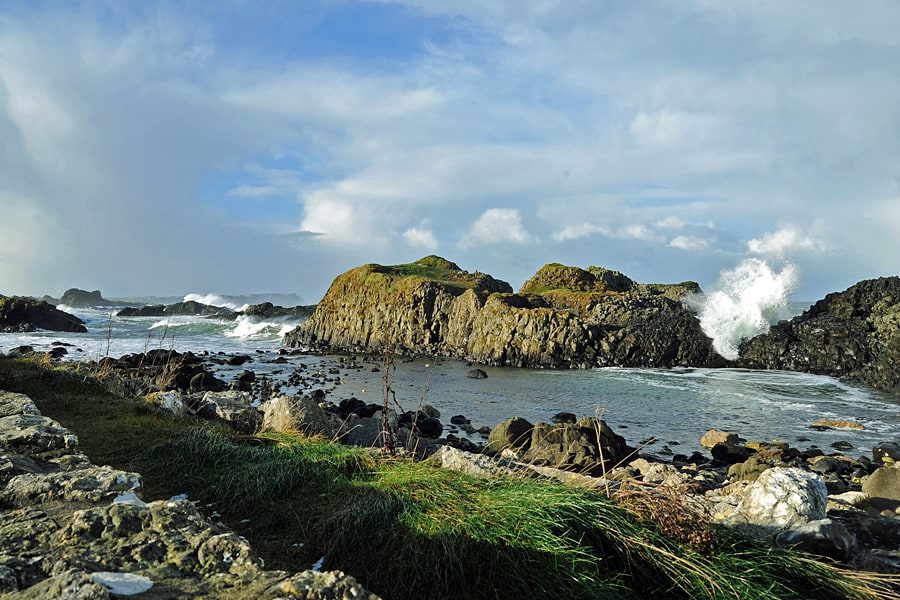 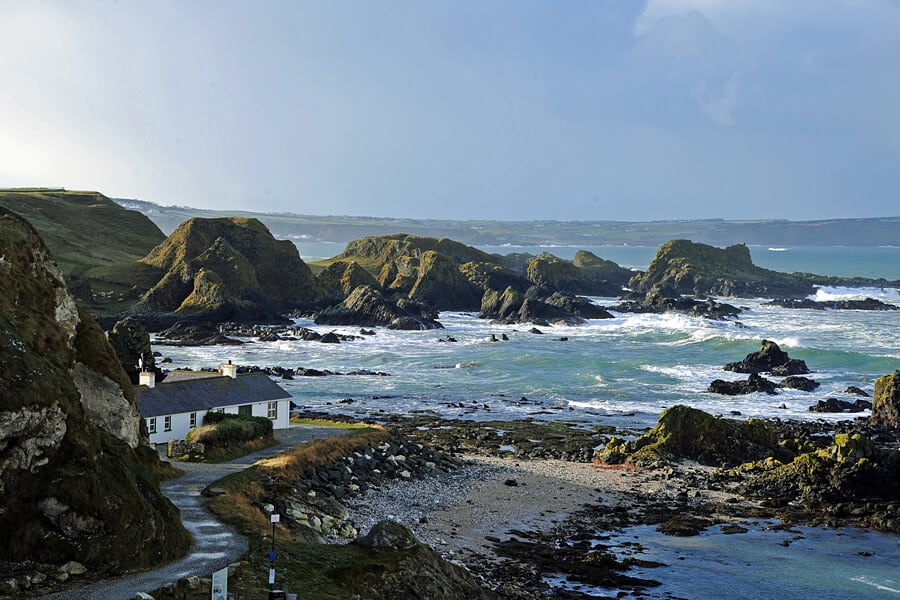 Having read about Bushmills Inn on Heather on Her Travels, I was looking forward to thawing out with a hot meal at this cosy traditional inn. Oozing character and charm with oak beams and roaring fires, it offers a warm respite from the cold. I immediately fall in love with the place and dream of returning for a long weekend. Lunch is excellent, as is a glass of Hot ‘Bush’, a warming drink of Bushmills Whiskey with hot water, Demerara sugar, lemon and cloves. 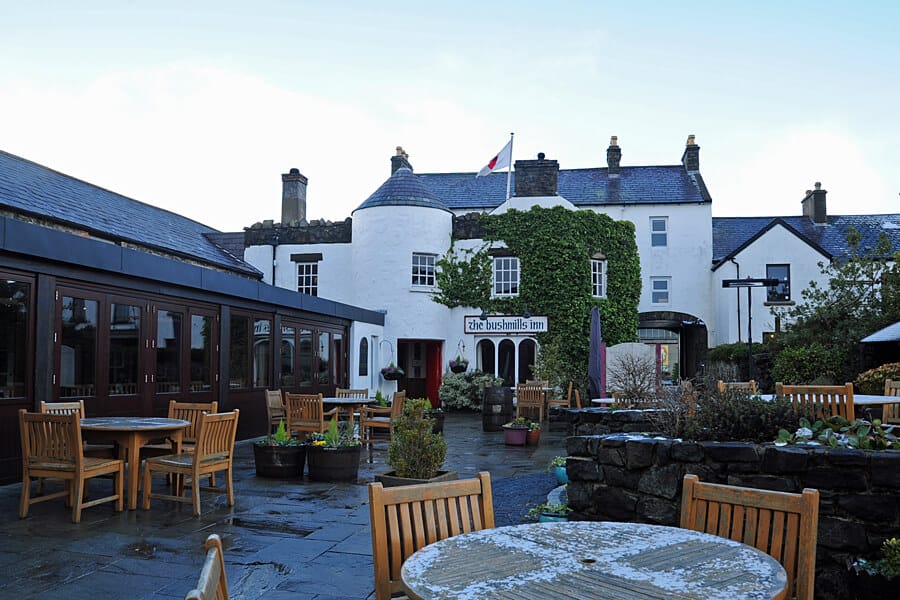 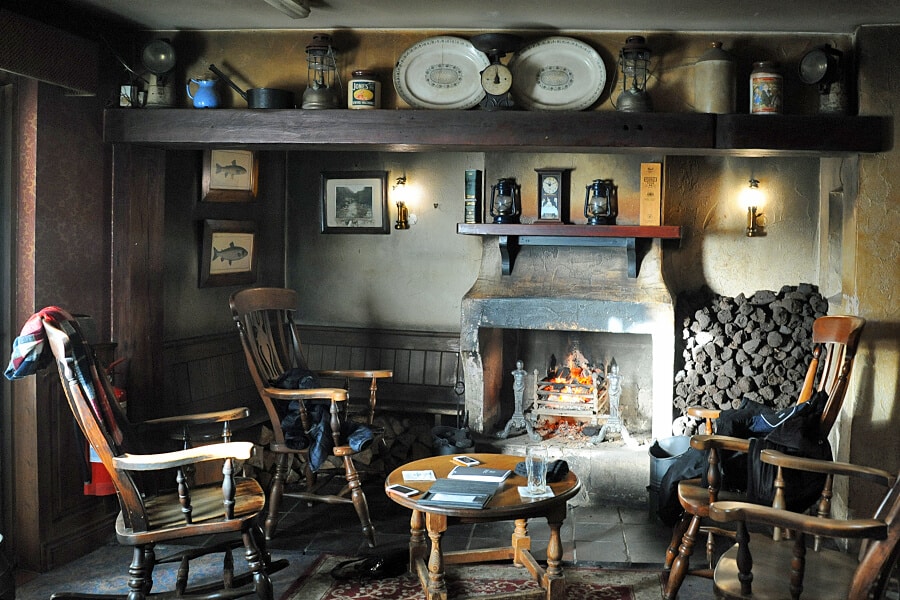 Growing up in the UK, I never associated my homeland with earthquakes and volcanoes. These were things born of distant lands. Yet beneath the British Isles lies a network of fault lines, constantly under stress, crisscrossing the earth’s crust and causing hundreds of seismic events each year. While these events are generally minor, perhaps leaving only the odd crack in a wall or a few roof tiles that have slipped in their wake, there is evidence aplenty that in the past much larger events occurred, sculpting the landscape into dramatic rock formations and mountainous volcanic peaks. In recent years, geologically speaking, the glaciers of the ice-ages further sculpted our land. 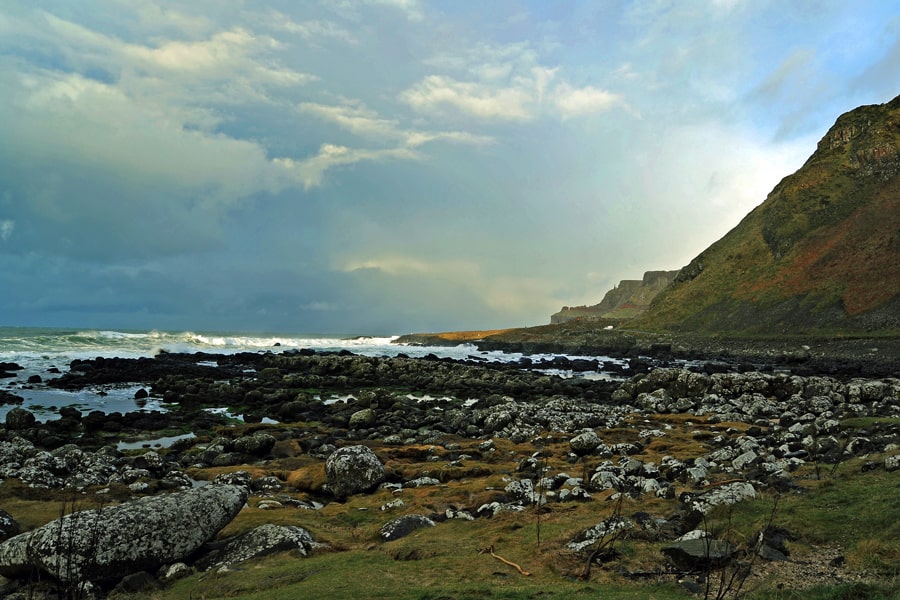 Today we have no active volcanoes. 50 to 60 million years ago it was a different story. One of the most dramatic landscapes in Britain, the Giant’s Causeway on the north-west coast of County Antrim,  was formed as lava was forced up through fissures, rapidly cooling, contracting and drying out to form hexagonal basalt columns. There are some 40,000 of them, varying from a few centimetres in height to about 12 metres tall, resulting in a dramatic staircase-like structure, leading down from the cliff face to disappear into the Irish Sea, only to re-emerge on the island of Staffa in Scotland. Various local legends tell of how the Causeway was really formed, the most well known being that it was built by an Irish giant, Fionn mac Cumhaill (Finn MacCool), so he could pick a fight with a Scottish Giant. Why exactly the vast majority of the columns are hexagonal, I’m still trying to get my head around.

Declared a UNESCO World Heritage Site in 1986, the Giant’s Causeway is the most visited tourist attraction in Northern Ireland. 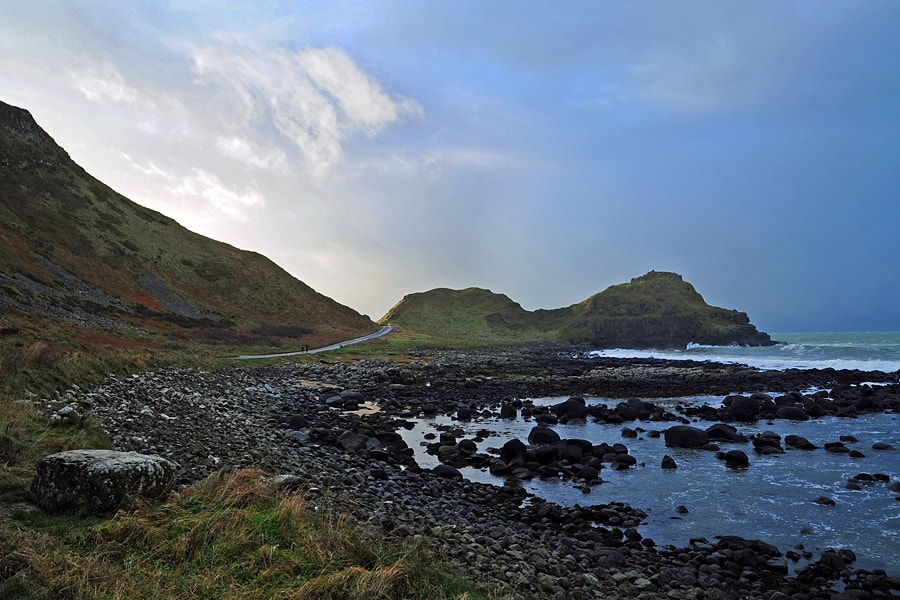 The National Trust Centre here is well worth looking around and from there it’s a scenic walk down to the Giant’s Causeway itself (or you can take the shuttle bus). We choose to walk despite the bracing winds. The scenery is well worth it, and it’s not long before we see the famous basalt columns rising up out of the ocean, with many a selfie taker perched precariously atop, looking as if they are about to be washed away as the sea rages behind them. 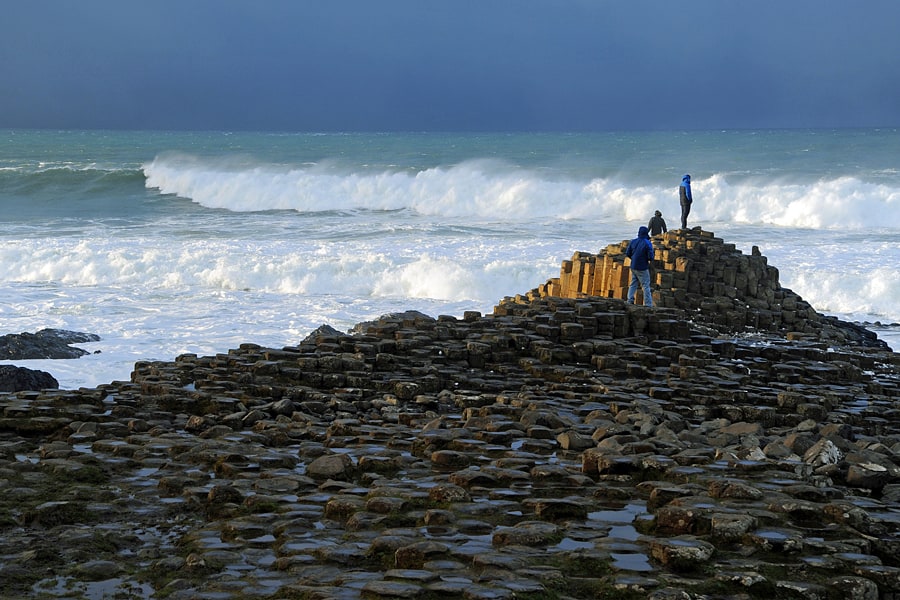 As I clamber over the columns, a dark, ominous weather front is moving in. As the local guide predicted, we are soon being pounded by hailstones. We retreat into the shelter of the shuttle bus and back to the visitors’ centre. 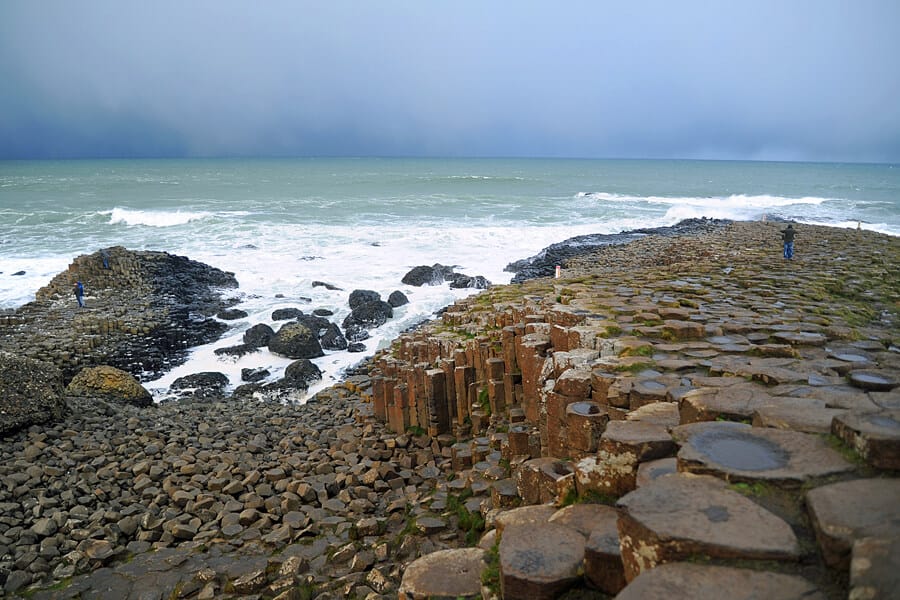 There’s just time to pop in at the Bushmills Distillery, a fine whiskey which I acquired quite a taste for last time I visited Belfast. We’re too late for a tour or tasting, but not too late for a spot of shopping.

While we didn’t have much time at The Giant’s Causeway and we missed out on a number of locations due to the weather, it was a fabulous, invigorating day, one that I wouldn’t have missed for the all the whiskey in Ireland. I’m sure I’ll be back again one day. I still need to take a tour of the Bushmills Distillery after all. Speaking of whiskey, there’s another tipple that I took a shine to during this visit to Ireland – Jawbox Gin. More on that and other drinkable and edible delights from Northern Ireland in my post, Chocolates, gin and seaweed on a fabulous Belfast Food Tour.

Where to stay while visiting the Causeway Coast?

Where to stay in Belfast?

The Causeway Coast is easily visited on a day trip (or two) from Belfast. I’ve stayed at the hotel Europa a couple of times and found it very comfortable, with excellent service and great food. It is also centrally located, and right opposite two of my favourite pubs, the Crown Liquor Saloon and Fibber Magees. I felt very safe walking back to the hotel alone in the evenings and would recommend it for solo female travellers, couples, business travellers or groups of friends. The bus station is right behind the hotel so it’s super easy to catch a bus to the airport too from here.

I’ve also stayed at the Ramada in the Cathedral Quarter and found it perfectly located for enjoying a great range of fabulous bars and restaurants right on your doorstep. It’s an easy walk from there into the town centre as well as the Titanic Quarter too. The nearby Dream Apartments are lovely too and would be a great choice if you’re looking for self-catering accommodation. The Cathedral Quarter would always be my first choice when it comes to location.

Where to stay in Bushmills?

While I’ve not stayed at the Bushmills Inn but I’ve visited it a couple of times and would have no hesitation in recommending it. It’s conveniently located near the Giant’s Causeway, Bushmills Distillery and Dunluce Castle. The inn itself oozes character and charm, the staff are very friendly and the food superb.

Looking for a hotel along the Causeway Coast?


I explored the Causeway Coast with an excellent guide and driver, Billy Scott. I’d highly recommend him. You can find out more about tours available with Billy at TouringAroundBelfast.com or by emailing him at billy@touringaroundbelfast.com. Alternatively, Viator also offers a number of Game of Thrones tours from Belfast.

Discover more…
Top 12 Things to See and Do, Eat and Drink in Belfast
Chocolates, gin and seaweed on a fabulous Belfast Food Tour 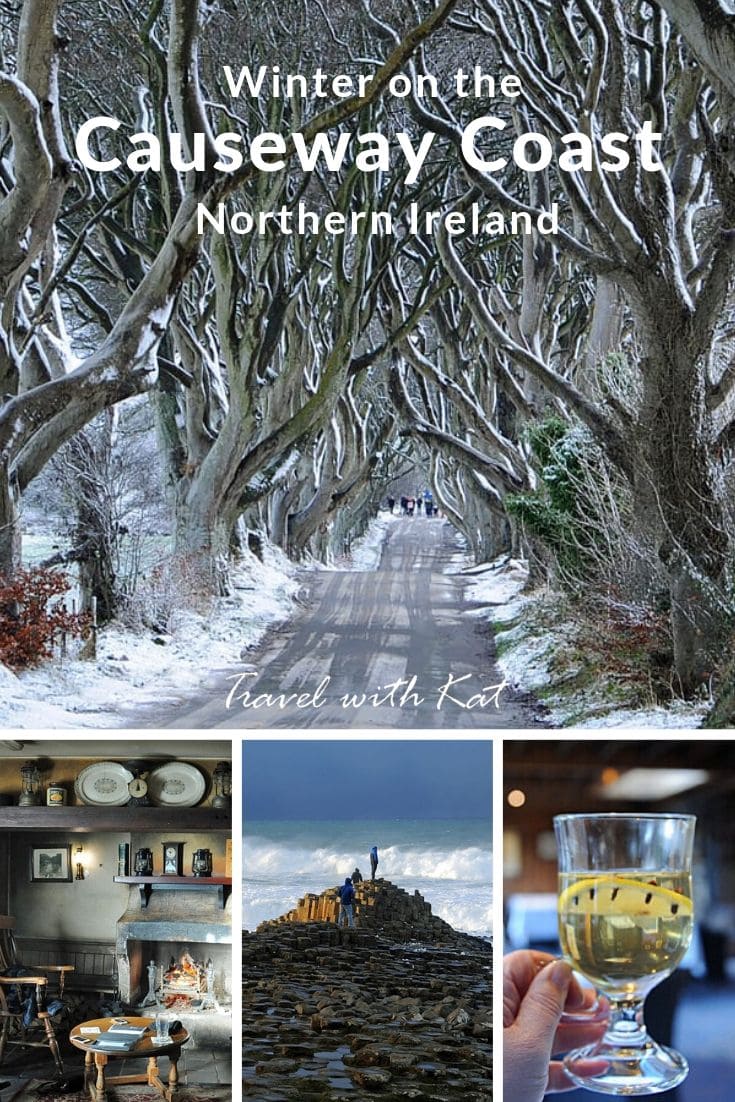 The weather may be ever-changing, but the beauty of Venice is not. Here are my tips for photographing this iconic...