Monkeys at play in a Gambian garden 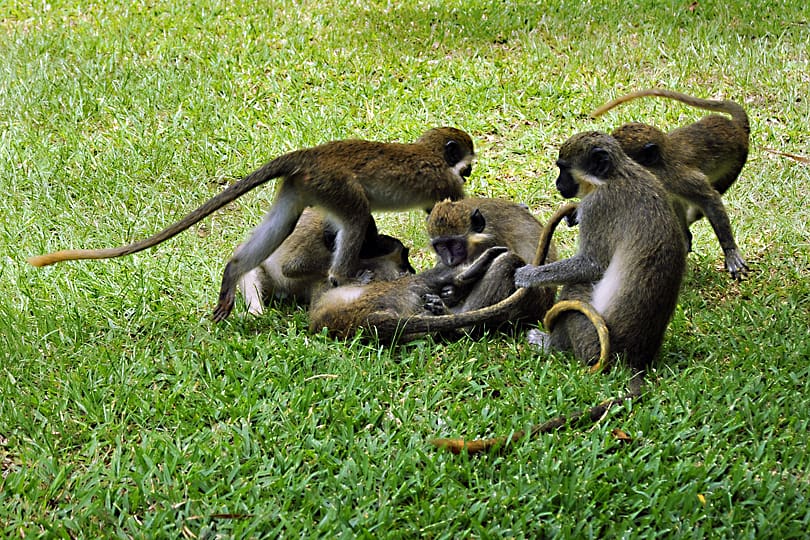 During my last visit to The Gambia I stayed in the area known as the Senegambia strip. It’s the largest and liveliest resort in The Gambia, although in late June and early July when I was there, it was pretty quiet. Despite the humidity it is a lovely time of year to go just at the start of the green season. For the first time, in 8 years of visiting, I saw rain in The Gambia. Although it was just a short shower one afternoon plus a couple of storms in the night; the umbrella I had taken was certainly never needed. I had a wonderful time and did many interesting things. In this post I’d like to share just one of many memorable moments – watching the green vervet monkeys playing in the grounds of the Senegambia Hotel.

Although I was out and about a lot during my stay I still found time to visit my hotel’s lovely pool by the beach and I always enjoyed looking out for wildlife as I walked from my room through the hotel’s extensive gardens to the pool. Numerous beautiful birds and butterflies could be spotted but my favourite sight was the green vervet monkeys playing on the lawn. A couple of times I stopped a while, watching them and the last time I made sure that I had my camera with me. I stood there for ages just watching and slowly, step by step, moved closer and then a little closer. In the end they were just a few feet away and they seemed completely oblivious to my presence. Vervets live in troops that can vary greatly in size, with females always staying in the troop they were born into and males, upon reaching maturity, moving to a neighbouring group. Brothers often move together so that they can support each other and thereby increase their standing in the troops hierarchy. The monkeys I watched in the gardens were wrestling quite vigorously; no doubt a test of each others strength, especially with the males. You can read more about vervet monkeys’ behaviour here.

It really was a magical moment to be able to get so close to these wild monkeys, mind you, these ones must be pretty used to humans, although the hotel, quite rightly, asks guests not to touch or feed them. Should I stay or should I go now?

I stood there for ages snapping away with my camera and the monkeys completely ignored me. I was absorbed in just watching them but then I felt a little tickle at the back of my leg. One cheeky fellow had snuck-up behind me. In a split second every single monkey turned towards me, starred me in the eye and, as if one being, started moving my way. It was quite surreal. Almost as if someone had whipped away my invisibility cloak! They were literally just a couple of feet away. While they may have been just curious I wondered if they had decided they had enough of me watching them or were they thinking ‘That would make a good climbing frame to play on’ ? Even if it was the later they would still probably scratch and even bite said climbing frame! Mind you the fact that they were all staring me in the eye is a sign of aggression and dominance.

I studied Zoology and Psychology at Bristol University many moons ago and have always had an interest in animal behaviour. I’m quite curious to know what would have happened if

b) I’d dropped my gaze, in a submissive gesture, as I drew back rather than

c) returned their gaze in a threatening manner, as I drew back or

I have no doubt that a troop of monkeys could move a lot faster than me! What would you have done?