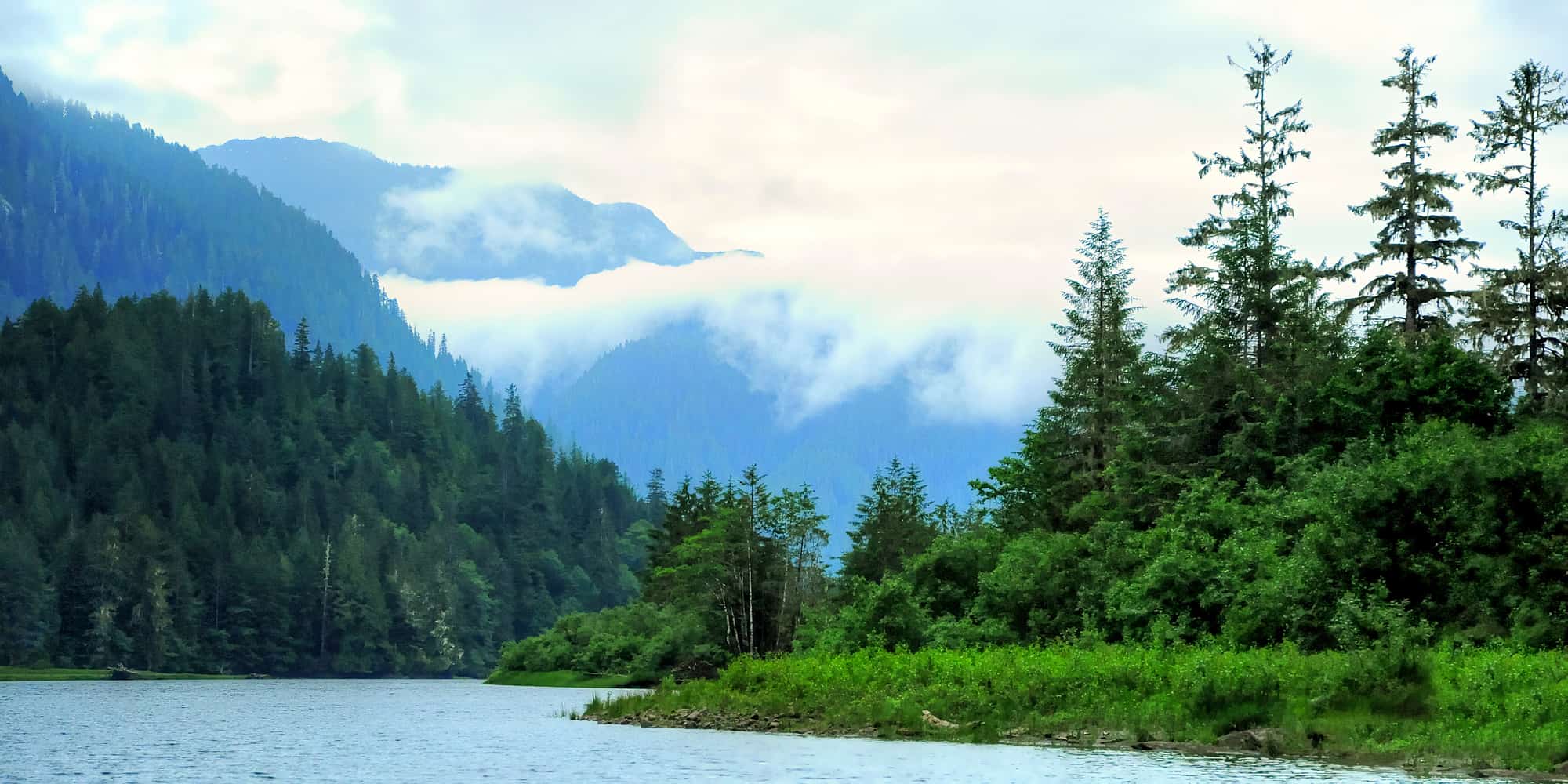 In Search of Grizzly Bears in the Great Bear Rainforest

We’ve be looking for hours, or so it seems, staring intently at the grass-like sedge that grows along the banks. Drifting along on the water with just the occasional sloosh from the oars, we pass trees clad in wispy moss – part of the ancient forests of cedars and spruce that surround us. Low clouds creep around the upper slopes of the tree covered cliff-faces. A light rain is falling, but our cameras are at the ready. And then I see them, two round fluffy brown ears, peeping up from behind the sedge. In perfect unison, two of us point at the same spot on the bank and softly exclaim – “Bear!”

Earlier that day I had boarded a floatplane at Port Hardy In the far north of Vancouver Island, a thrilling way to start this leg of my Canadian adventure. Ever since I first saw Indiana Jones making his escape on such a plane, I’d dreamed of flying in one myself. And now here I was in a de Havilland Beaver DHC-2, a single engine propeller seaplane (or floatplane, as they are known in Canada). I know it has to be at least 48 years old, as the last of its kind was made in 1967. Inside it was rather cramped and I couldn’t help but speculate to myself about whether the door I was wedged up against was shut properly. 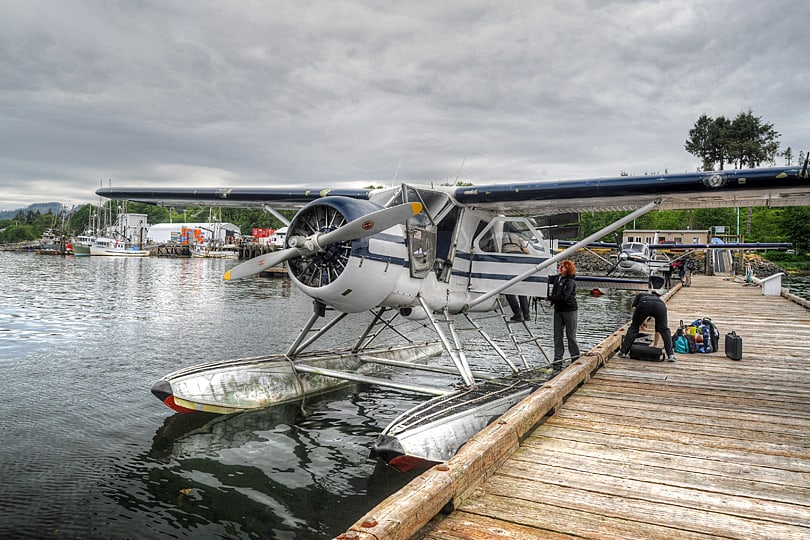 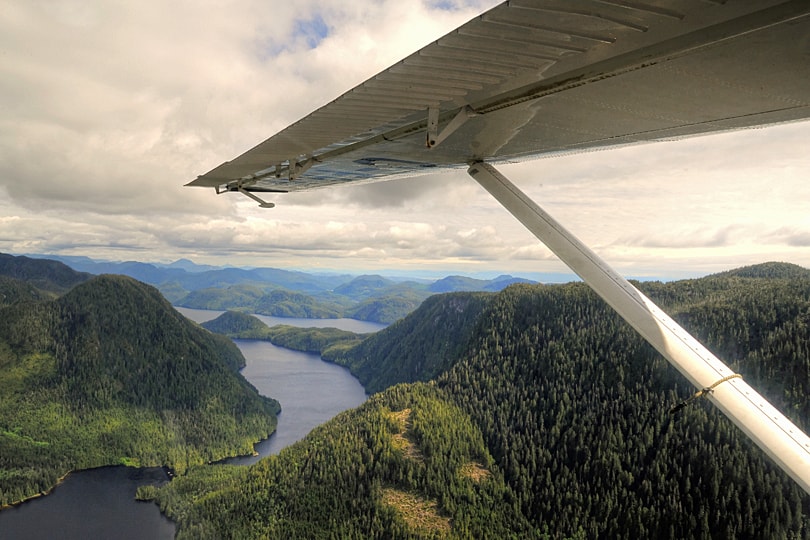 The views, as expected, are superb as we fly across the water to mainland British Columbia, and then head north across the Great Bear Rainforest. There are no roads where we are going. The only way to get there is by water or by air. Beneath us I spot the Great Bear Lodge, our floating home for the next few days. We skim above the water before gently landing and mooring up on the pontoon.

This has to be one of the most thrilling moments of my life. I could never have imagined I would have the opportunity to visit a place like this: the planet’s last great expanse of temperate rainforest, some 21 million acres of ancient woodlands, islands and inlets. It is home to wolves, cougars, black bears and, further north, the rarely seen white spirit bear. But it is the grizzly bears that it is best known for, and it is them that we are hoping to see. Once, their territory stretched from Alaska right down to Mexico, but now they are confined to Alaska, western Canada and just a few of the north-western states of the USA. Having climbed down from the floatplane, I take in my surroundings. The forest is spectacular. And then I notice the hummingbirds. These glorious little creatures are something I’d always wanted to see, and there are number of hanging feeders for them around the lodge. The hummingbirds are an utter delight to watch as they dart around, hovering briefly at the feeder before zipping away again. 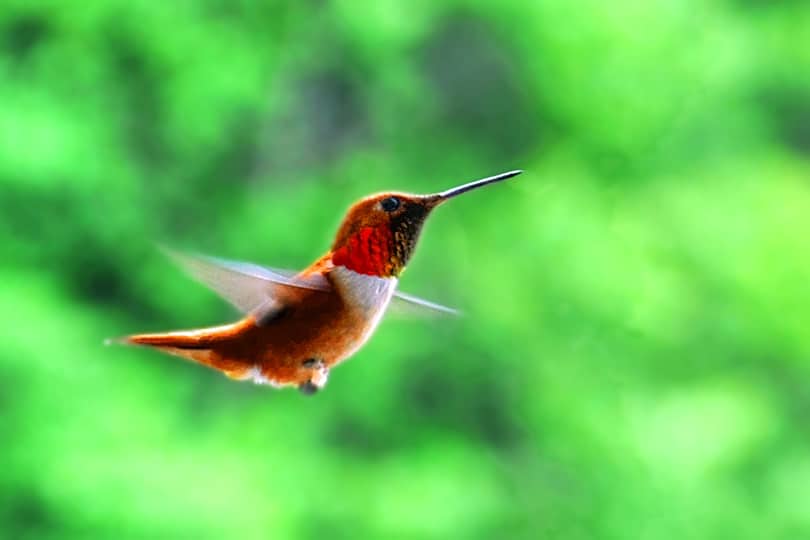 We have a little time to settle in before a safety briefing. One of the key points is that we are not allowed off the pontoon without being accompanied by a guide. Bears have been seen on the banks right near the area where we are moored. After a tasty evening meal, eaten around one long dining table, we’re off on our first bear watching trip. There are two every day here, one in the morning and one in the evening, as these are the times when the bears are most likely to be spotted. We’re kitted up with wellies and thick, camouflaged all-in-one suits to keep us warm, as well as waterproofs and sou’wester style rain hats, plus a life jacket. Not the most fetching of outfits, but we are glad for the layers, as it gets quite cold out on the water in the evenings. We are here in spring, when all the bear watching happens from small boats. Later in the year, hides are used to watch the bears as they catch the salmon which are making their way upstream to the stretch of river where they hatched the year before. 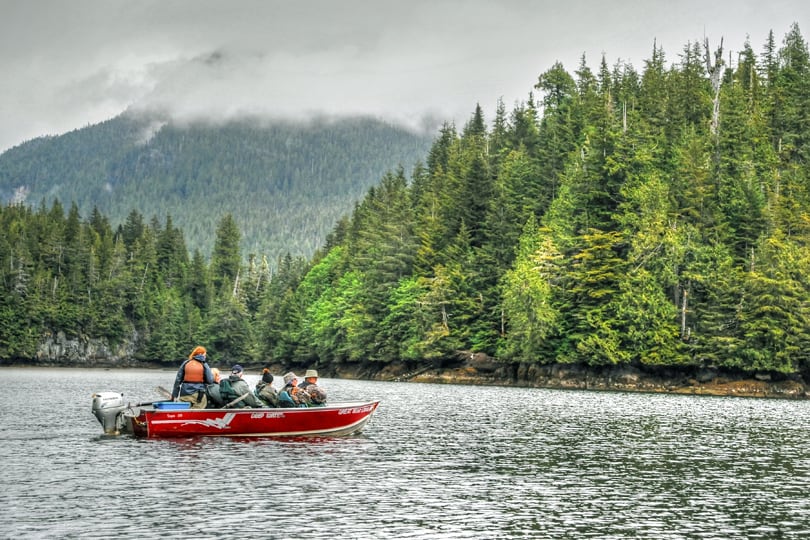 And so we are off in search of bears, scanning the banks of the rivers and creeks where they come to feed on the protein rich sedge that grows here in abundance. At low tide the bears search for mussels and clams on the exposed sand. The males and females without cubs are also in search of mates. Having been unlucky in our earlier whale-watching trips, coming home sans whale sightings, we are all a little anxious that we may not see any bears. So, it is with great excitement and some relief that we spot our first bear – or at least the top of her head. The brown fluffy ears soon disappear and we settle down to wait in the hope that she’ll make an appearance. 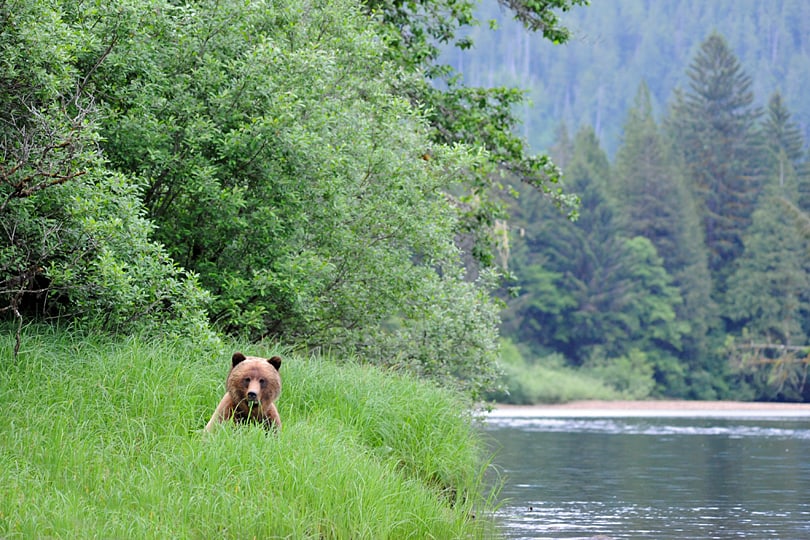 And so we stay in this same spot, wondering if she is still there. Then, with perfect pantomime timing, our guide Tom exclaims “Behind you!” Swivelling round, we spot her a little further down the bank, partly hidden behind some bushes. Tom calmly manoeuvres our boat into a better position. Our cameras click away and at last she appears out in the open, happily munching the sedge. With an occasional nonchalant glance in our direction she carries on feeding, seemingly indifferent to our presence. It is a joy and a privilege to watch her. I can’t help thinking how much like a teddy bear she is. A life-sized, living, breathing teddy bear (with bigger teeth and claws of course). 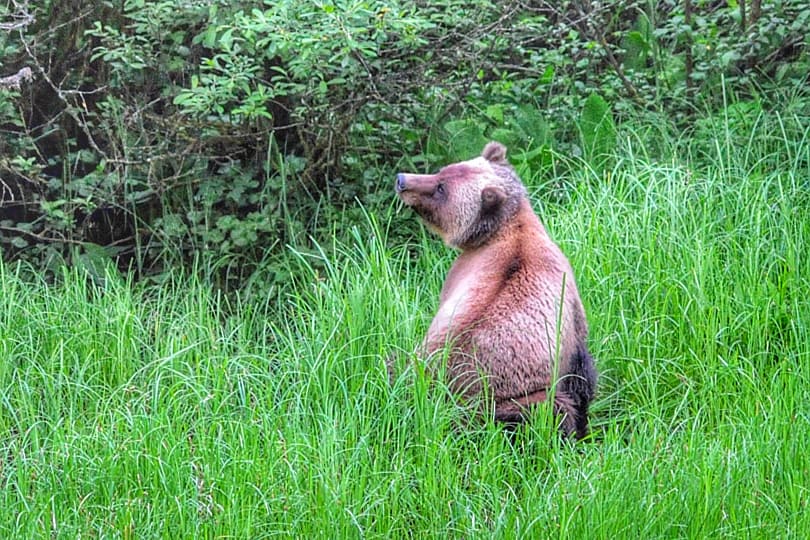 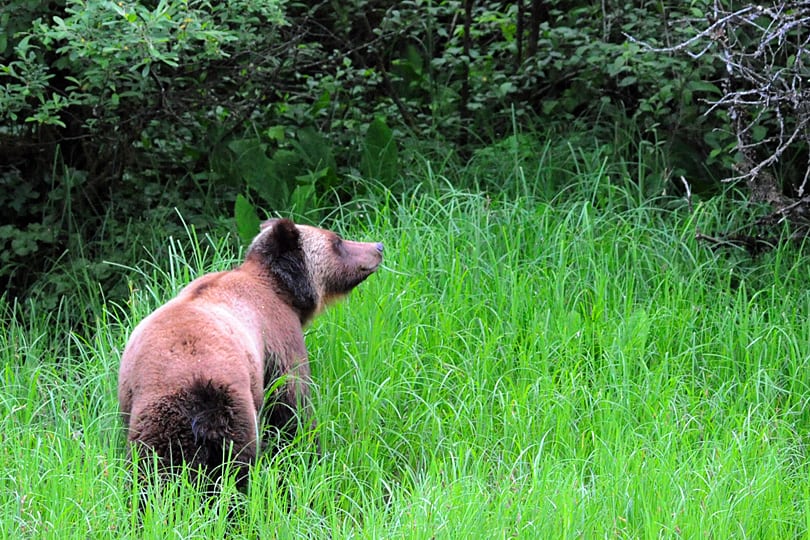 As the light fades, she ambles off back into the forest and we head back to the lodge, so very happy to have seen our first grizzly bear. At dusk, the forest takes on a surreal glow as twisted branches reach out towards us and we wonder what creatures of the night are hiding behind the trees. Hot chocolate, wine and freshly baked biscuits are waiting for us when we return, a little chilly, but grinning from ear to ear. 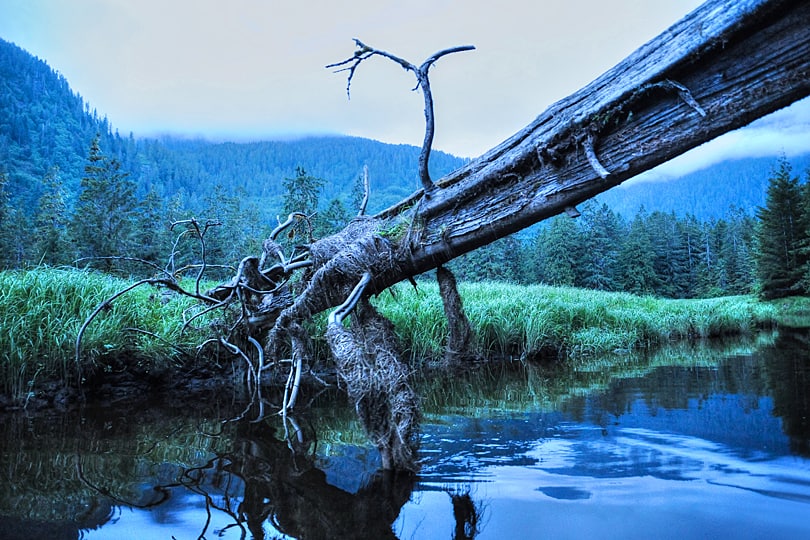 All the guides at the lodge have been very thoroughly trained in every aspect of responsible bear watching, as well as the fauna and flora of the forest. They have also learnt about bear body language and if a bear is showing signs of being agitated, angry or distressed in any way, they know to immediately back off. Such protocols are followed so that we can safely view the bears in a natural setting while minimizing our impact on them. The lodge only takes a maximum of 10 guests at this time of year so that there are only ever two boats, with five people in each, out on the water at any one time. Later in the year this number increases slightly as they watch from hides, which has less impact. There is also a strict limit as to how close we can come to the bears in these boats, although if the bears then choose to move towards us, that is fine. As I found out on the following morning’s excursion, they really can come rather close. When I took the photo below of this larger male grizzly that we spotted the following day, I well remember thinking “That really is close enough!” But what a thrill it was to see him at such close range from our boat on the edge of the river bank and look straight into his eyes as he stared back at me.

Inspired and want to find out more? Visit Explore Canada.

Cities on the edge of nature – Vancouver, a fabulous eco-friendly city with nature all around.

Cities on the edge of nature – Victoria, a welcoming, sea-side town with great food, a great atmosphere and whales a plenty (except when we were watching) plus responsible whale watching tips. 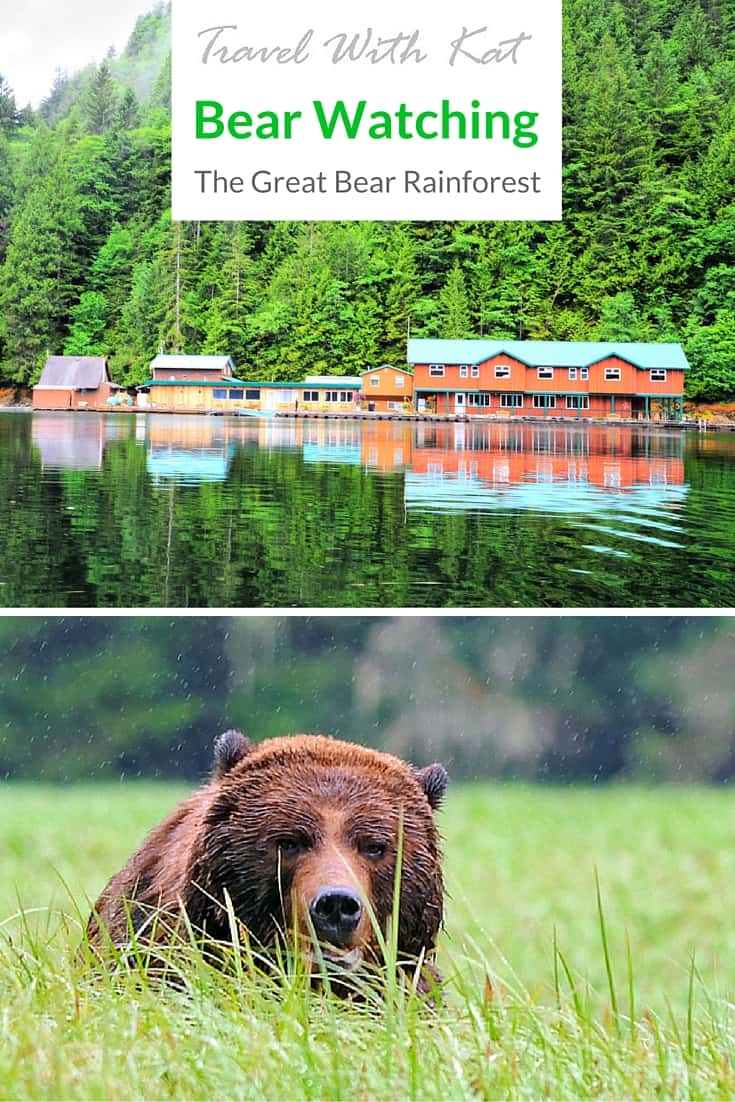 I visited Vancouver as a guest of Destination Canada as part of a Travelator Media campaign.

Please note that most of the following links are affiliate links which means that if you click on the link, I may be paid a small commission. You can find out more about affiliate links in my Disclaimer.

I never travel without insurance. If something unexpected goes wrong the costs implications are just too high to take the risk. World Nomads provides travel insurance to travellers from over 130 countries. They're the perfect choice for long term travellers or single trip insurance.

Check out my guide to all my favourite travel clothes for women.

Book your hotel or package holiday

TripAdvisor is my preferred hotel search engine. They compare all the top sites to find you the best deal. I also use Airbnb ($31 discount) for booking rooms/apartments.

Skyscanneris my preferred flight search engine. I'd recommend them for finding the best deals on flights.

Discover Carsis a great site for comparing car hire prices to help you find the best deal. They search both local and international rental companies.

When I’m travelling, especially to a new city, I use Viator and Get Your Guide to book tours and excursions. You can't beat a good food tour to introduce you to a new city!

. It’s pretty much the only one you’ll ever need. Please note that as an Amazon Associate, I earn from qualifying purchases.

By using our site you accept that we use and share cookies and similar technologies to perform analytics and provide content and ads tailored to your interests. By continuing to use our site, you consent to this.Agree and proceed to websiteRead more

Vancouver on the west coast of Canada is said to be one of the best places in the world to...