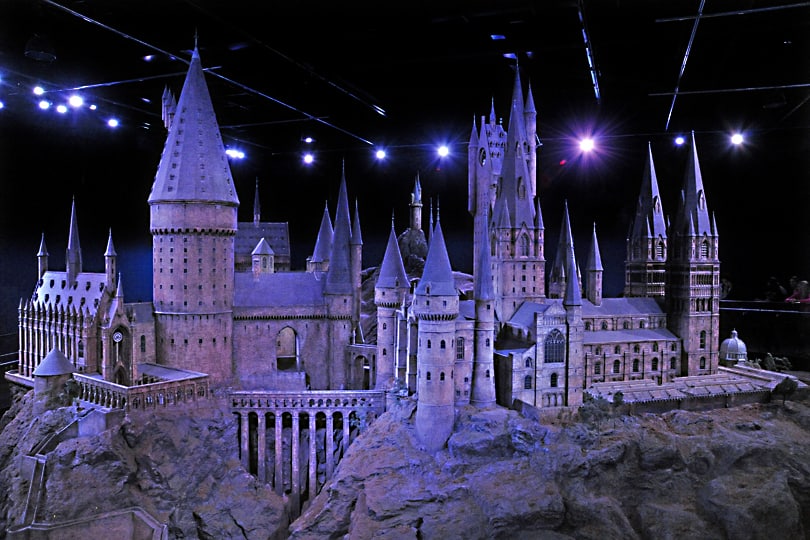 I was surprisingly, unsurprised when I received a text one afternoon simply saying “I’m hoovering Hogwarts”.

The sender of the text was indeed referring to the school of witchcraft and wizardry from the magical world of Harry Potter, brought to life by the pen of J K Rowling and to the big screen by Warner Brothers. 8 films in total were made and following the release of the last film, the doors were finally opened to the Warner Bros Studio Tour London: The Making of Harry Potter.

Two years later it was my turn to walk through those doors and into Hogwarts and the world of wizards, goblins and muggles. We entered via the Great Hall itself, home to many a fancy feast and of course, the sorting into houses of each new first year as they start their wizarding journey. 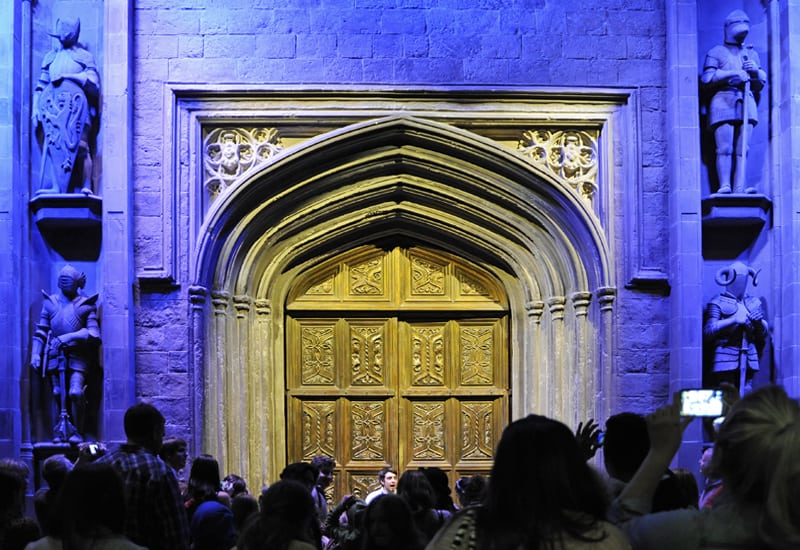 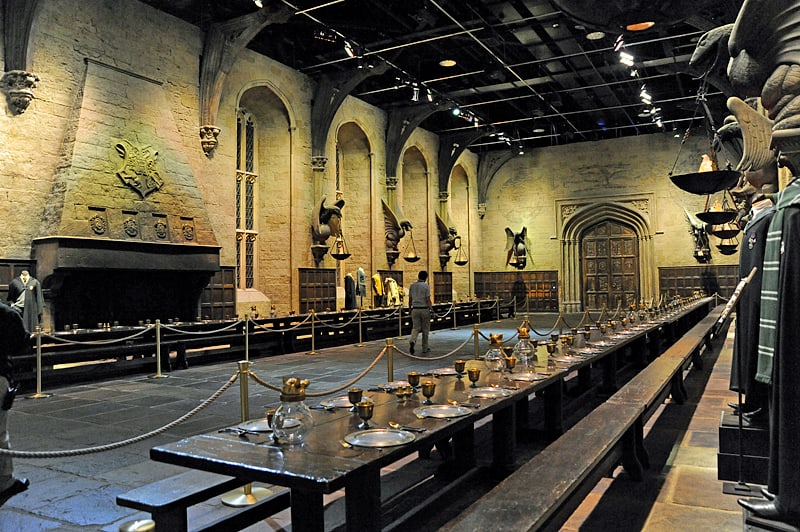 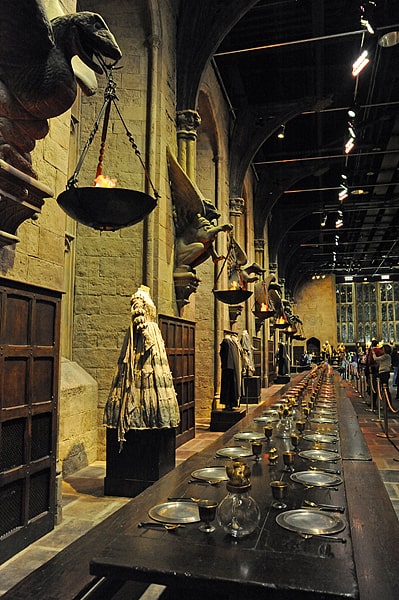 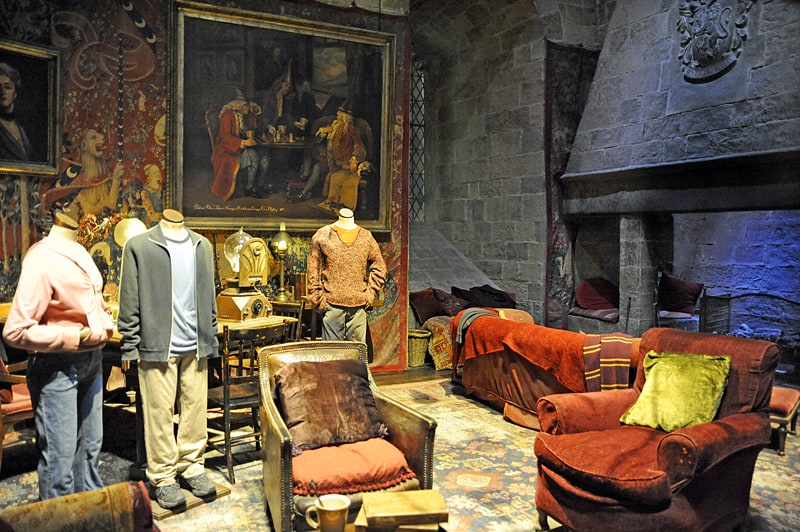 The tour takes you around familiar sets including the Gryffindor common room and offers you a close-up look at many cleverly designed items such as the snakes on the door to the Chamber of Secrets. In the film of the same name, the snakes slither across the door as it opens and closes but they weren’t computer generated as many assumed. They are hand-made articulated snakes that move along slotted tracks, powered by a hidden electric motor. 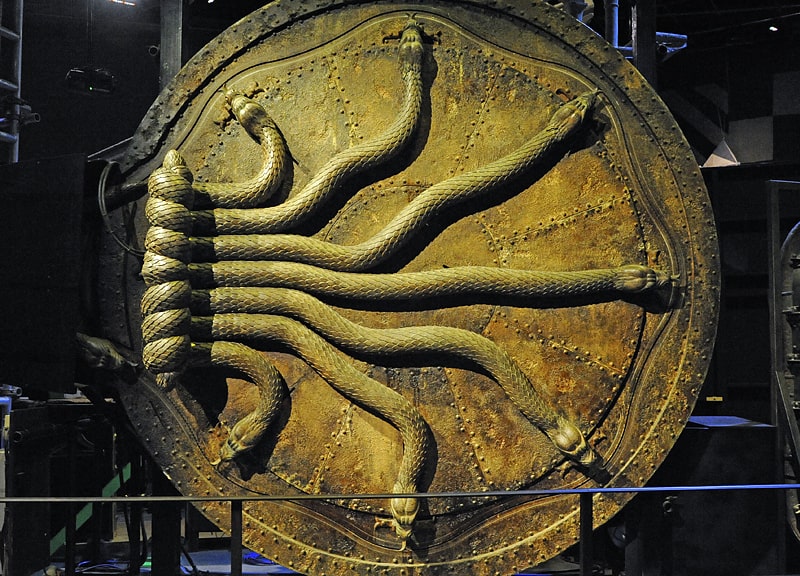 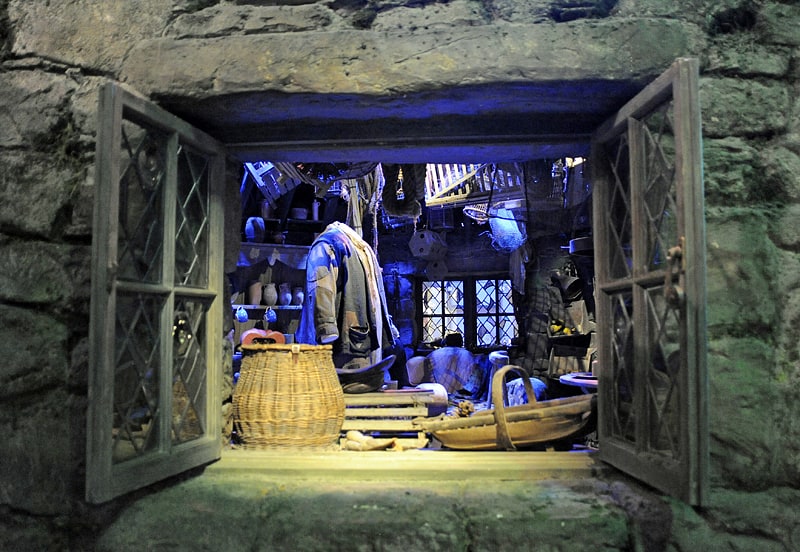 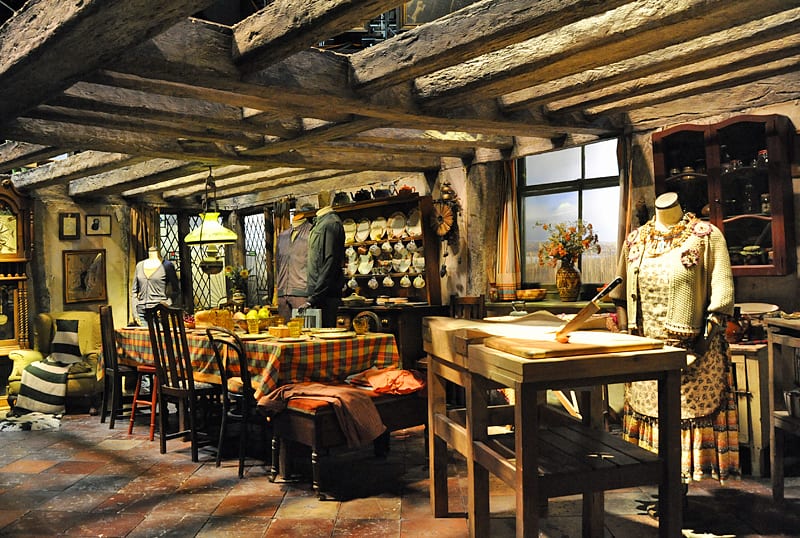 You can take a peek inside Hagrid’s hut and the Weasley’s kitchen. You can even take a ride in the Weasley’s flying car or on a broomstick and being the big kid that I am, I thoroughly enjoyed flying over London and the towers and spires of Hogwarts itself. (Although you’ll have to go on the tour itself to see how that is done.)

Back down to earth, the tour heads outside where you’ll find a bar selling butterbeer (an acquired taste)and exhibits including Privet Drive, where Harry grows up, and the fantastical Knight Bus that features in ‘Harry Potter and the Prisoner of Azkaban’. 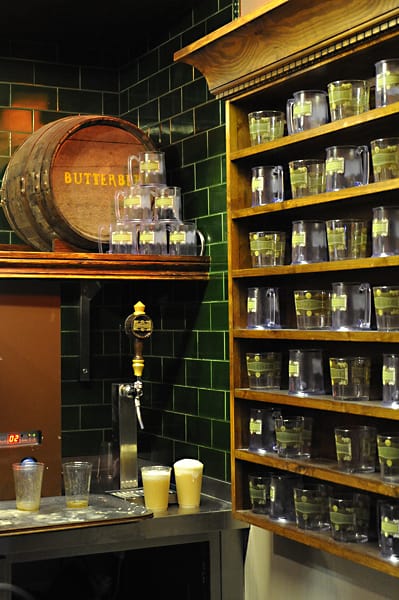 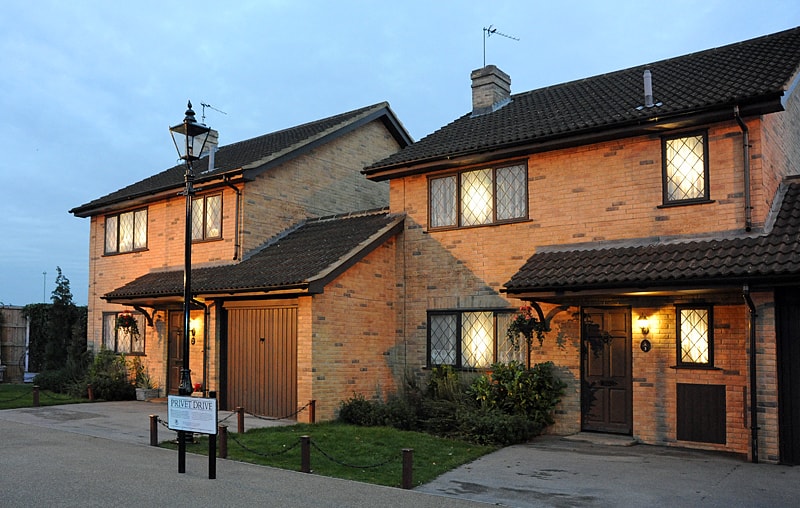 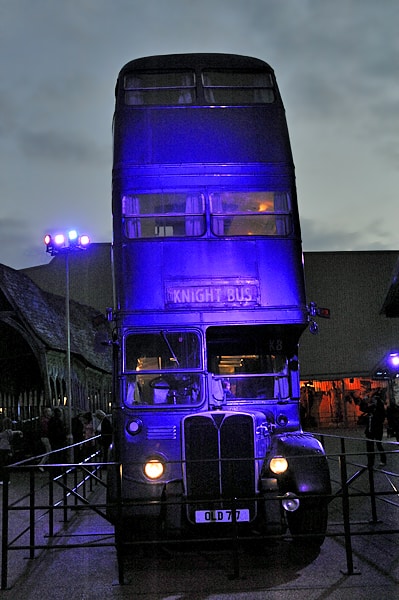 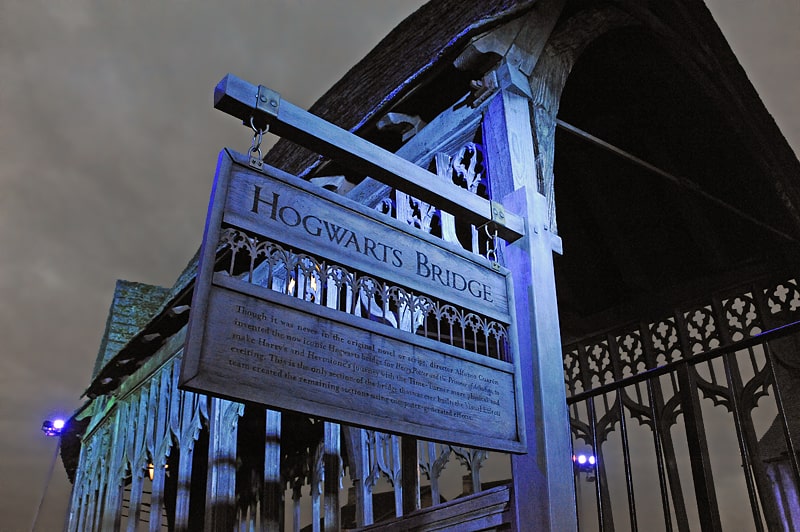 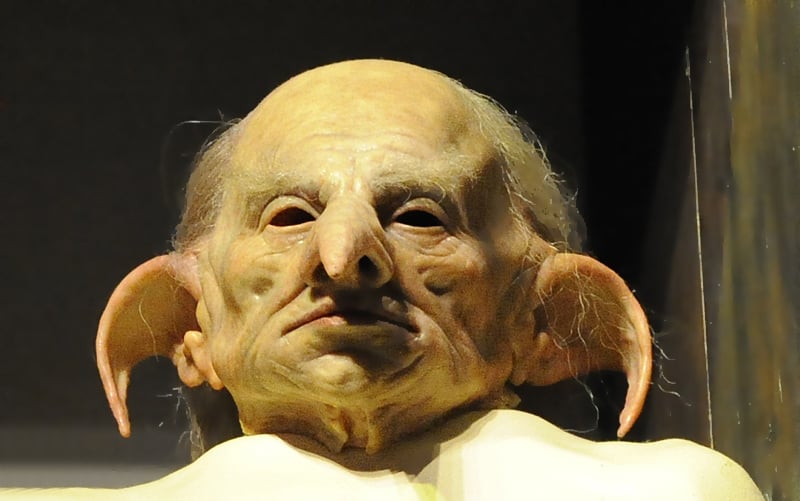 Back indoors again, there are yet more displays including many of the creepy prosthetic masks worn by the actors playing the goblins of Gringotts Wizarding Bank. There’s also a recreation of Diagon Alley, one of a number of highlights of the tour for me. 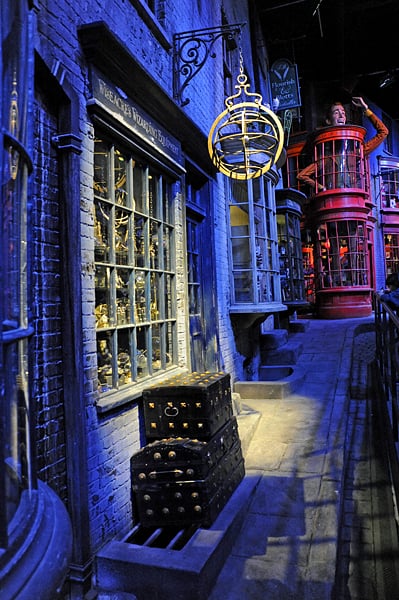 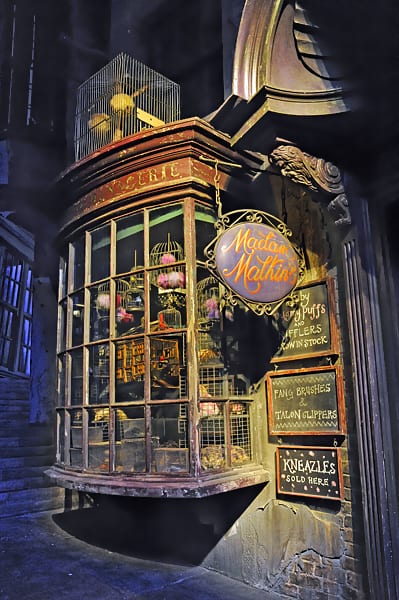 Detailed drawings that the model makers work from are also on display, as are some of the white card models used to check the size and scale and to determine camera angles for filming, before the actual model set is constructed. 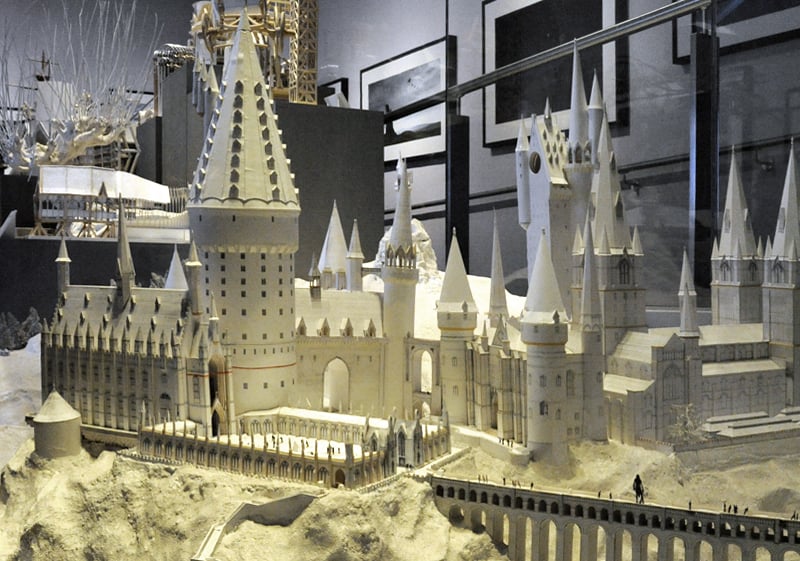 The tour ends in a large exhibition hall where the whole of Hogwarts is laid out before you – all at 1/24 scale that is. It is spectacular and has a real wow factor. I’d love to return one day and see it covered in snow, as it is each Christmas. 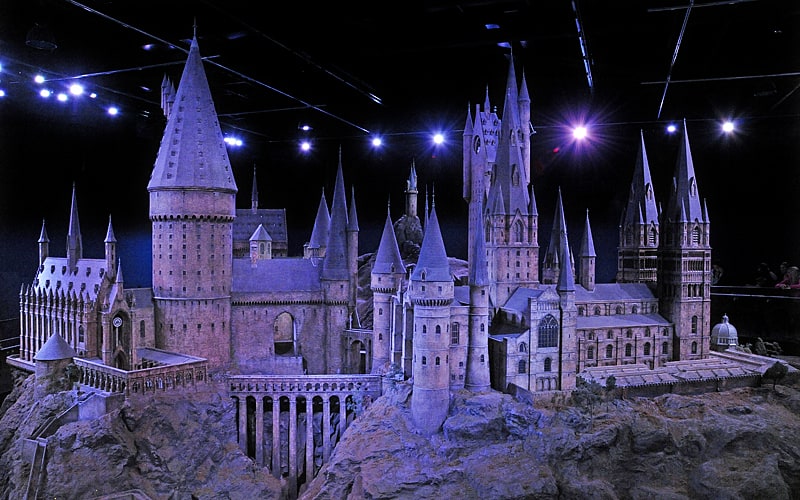 So just WHO was hoovering Hogwarts?

Neill, my fiance. He was helping  prepare the exhibition for its opening.

Neill works as a sculptor and model maker in the film industry, specialising in making costume armour and has worked on films such as Thor and Clash of the Titans and the TV series, Game of Thrones. He also makes models, including part of the huge scale model of Hogwarts that we were now admiring.

Neill started working on the Harry Potter films during the making of the 6th film, ‘Harry Potter and the Half Blood Prince’, when an extra tower was needed.

From a detailed scale drawing such as those shown earlier, he made the scale model of the tower in wood and plaster and then, a few years later, he helped prepare the Hogwarts model for the Warner Bros Tour.

“The model was made in pieces so that it could be moved around to be set up in the studio for filming and put away for storage between films. We would never have been able to get it to its present location at the exhibition otherwise. It was then reassembled and repaired and all the joints hidden. There were also 1/10 scale sections made for closer shots.” Neill explained.

And if you are wondering why suddenly, so far into the series, a new tower was needed…

“All throughout the series of films Hogwarts changed as more bits were added, but it is a school of witchcraft and wizardry after all!”

The exhibition opened in March 2012 but it was not until Neill’s younger daughter asked to go and see it for her birthday that Neill and I went. We all loved the tour and it was such a thrill to see Hogwarts and to watch everyone’s reaction to this fabulous miniature world, that Neill had helped create. 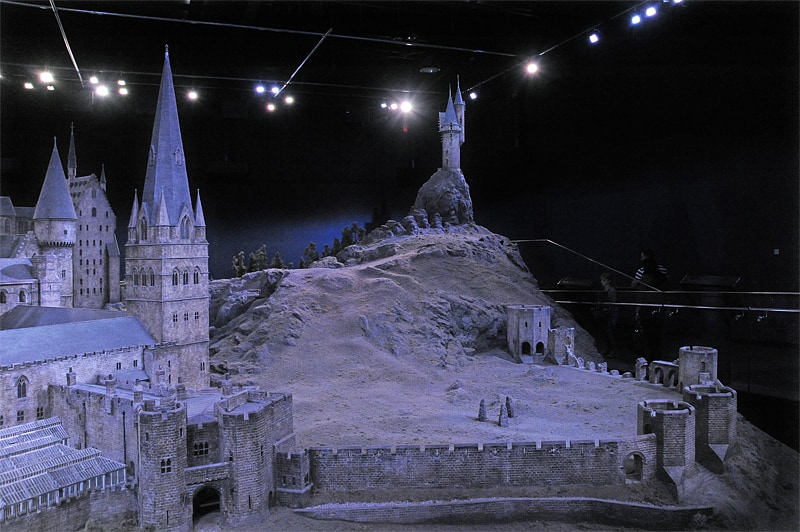 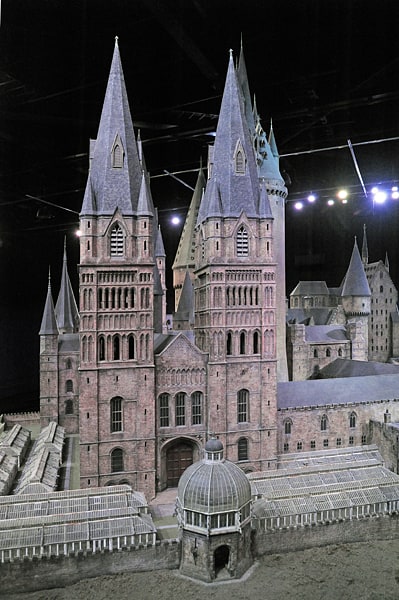 The Studio Tour, while not in London is easy to reach from the city for a day out. It is 20 miles north-west of London and less than three miles from the M1 and M25 motorways. The tour’s website has all the details of how to get there by car or by bus, including a transfer package from central London here. For hotels in London visit travelstay.com.

Being a big Harry Potter fan I had a fabulous time and thought the ticket price of £31 was good value for money as there is so much to see. Child discounts and family tickets are also available. If you want a souvenir of your broomstick flight or car ride, however, you are not allowed to take any photographs or videos yourself and those taken by the studio are very expensive.

The souvenir shop has an amazing range of goodies from a Gryffindor polo shirt or a Slytherin scarf to a copy of the Marauders Map or Hermione’s wand but I do have to say I was very disappointed at the high cost of everything there too. Be sure to set a strict budget for your children before you go in.

That being said, the tour is a great day out and a fascinating glimpse behind the scenes of the making of Harry Potter.

Brought to you in association with TravelStay.com.

Things to do on a girl’s getaway to Brighton, East Sussex

There are plenty of great things to do in Brighton on a girl's getaway or day out, from strolling along...