When I was invited to join a Hurtigruten cruise in the Arctic, as you can imagine I eagerly accepted and if you followed my journey on Instagram or Twitter you’ll know what a wonderful time I had. The biggest highlight has to be the husky dog sleigh ride, which I wrote about in my last post, but really the whole trip was made up of one exciting highlight after another, interspersed with the occasional low, such as realising I’d missed the announcement that the Northern Lights had appeared, but don’t worry, I did see them in the end!

We set off from London and flew with Norwegian into Oslo. Despite all my travelling, I had never come across wi-fi on a plane so it was with quite some excitement that I sent Instagrams and Tweets from 35,000 feet in the air!

From Oslo we took an internal flight to Tromsø, in the Arctic circle, and headed straight to the dock and our home for the next few days, the MS Richard With. A warm welcome and cosy cabins awaited us on this smart, rather than luxurious, ship and we were soon settled in.

As we headed north along the Norwegian coast we stopped at numerous ports, both night and day, so that goods (and people) could be loaded and unloaded, as the Hurtigruten ships in Norway, aren’t just for pleasure cruising, they are very much working ships too. It was a wonderful way to travel, watching the sea and landscapes slowly changing before us as we made our way for port to port.

During our first morning on board we were due to go by coaches, in convoy behind a snow plow, to the North Cape, the most northerly point on mainland Europe. Sadly, however, it had snowed so much the day before that the road was blocked and the excursion cancelled – a rare but occasionally unavoidable occurrence. So instead, I took the opportunity to explore the port of Honningsvåg, which looked lovely under a blanket of fresh snow. The sun shone and the air was crisp and clean, it was amazing though, how quickly the weather could change from glorious sunshine to a blizzard in just a few minutes but that was all part of the experience.

One of the prettiest ports we saw on the voyage was Kjøllefjord. We arrived late afternoon and the light was perfect, giving the port a fairytale glow in the moonlight. It was here that a local fisherman came on board to tell us all about the crabs we were going to eat that evening as part of a sumptuous seafood buffet. They were huge and having been told that if their pincers get you they won’t let go, we all took it in turns, rather nervously, to pick one up and pose for the camera.

Zoë, The Quirky Traveller, with a very large crab!

It was on the following morning that we arrived at our turning point, Kirkenes, next to the Russian border. Thank goodness that day’s excursion wasn’t cancelled as this was the one thing I was especially looking forward to – a visit to the Snow Hotel and their huskies, which you can read all about (and see more photos) in my previous post, Gliding along the frozen fjords on a husky dog sledge – an exhilarating and magical experience that I will never forget.

between Kirkenes and Vardø

Before I knew it, our last night on board was approaching and up until then, the Northern Lights had proved elusive, for me at least.

In all the cabins you can turn the radio on so that you can hear the ships announcements, including any sightings of the lights, no matter what time of night it might be. On the first night in the early hours the call came but the display was over before I could get dressed and dash outside. The following night, just after I had returned to my cabin following dinner, the call came again but I didn’t hear it! I’m not sure how as my radio was on. I was gutted when I learnt about this the next morning.

On the last evening we were all praying for the lights, as many, like me, had missed it the night before. We sat down to dinner and were tucking in to our soup when the call came and half the dinning room, including me of course, rushed off. For about an hour we were treated to a wonderful display but it is hard to photograph the lights from a moving boat, as it needs such as a long exposure.

Don’t fancy cruising around Norway? How about exploring Norway by campervan?

When we returned to the restaurant I was very impressed that we could continue our meal as if there had been no interruption at all. Despite our one hour disappearing act, the food was just as delicious as it had been throughout the voyage. I was surprised to find out that there are just 7 people working in the kitchen, to feed some 600 people on board.

One tip about alcoholic drinks in Norway – they are ridiculously expensive. On our first night we shared the cheapest bottle of red wine that they had on the boat. It was still very expensive and I’m sorry to say almost undrinkable. Thereafter we stuck to beer.

Our last day was spent watching the spectacular Norwegian Arctic scenery pass us by and late that evening we arrived back in Tromsø, at the end of a magical cruise around the northern coast of Norway.

Did I enjoy my first cruise experience?

Yes! While I would have liked a little more time on land seeing more of Norway, overall I had a really fabulous time, as you can see in this short video about the trip, including the huskies! 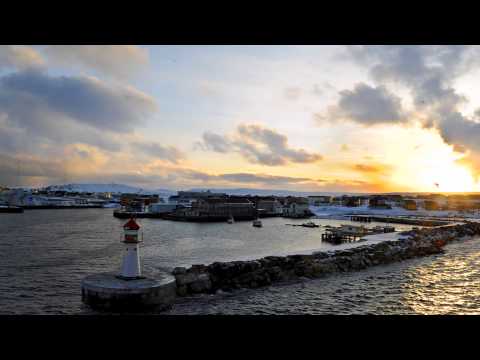 My thanks to Hurtrigruten for inviting me on this wonderful adventure, all the staff of the MS Richard With, who were superb, especially our waitress, and my fellow bloggers, whose company I enjoyed immensely.

The view I woke up to in Tromsø

Still to come from Norway on ‘Travel With Kat’, the beautiful town of Tromsø. Just look at the view from my hotel room on my last morning in the Arctic!

Disclaimer: While I was a guest of Hurtigruten during my time in Norway, all opinions expressed are my own honest thoughts.