Racing along the frozen fjords with the huskies 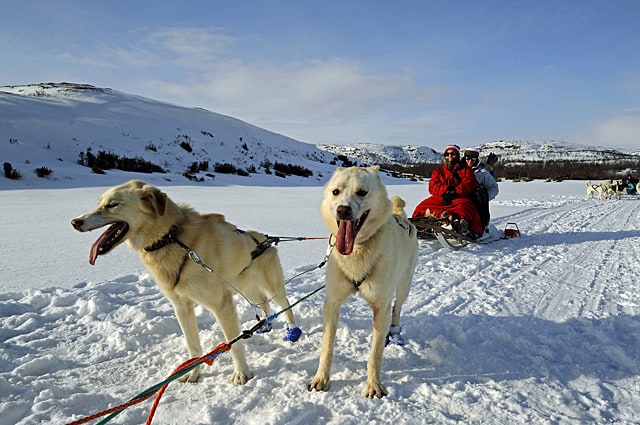 “There are moments when you feel nothing else other than being outside together with your dog-team. You forget about the concerns of daily life. You just feel. Moments when the Northern Lights show up, the moon is shining, the ice-crystals in the twigs are flickering, maybe an owl calls from somewhere and then you hear the breath of the dogs in front of you. It’s magic.” Marius, the musher, Kirkenes, Norway 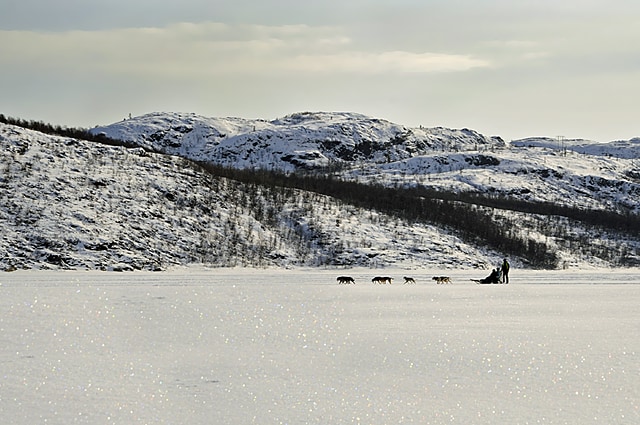 Last week I fulfilled one of my big travel dreams, namely visiting the Arctic and going for a ride on a sledge pulled by a team of huskies. While there I took the opportunity to find out more about what it is like to work with these wonderful, dogs from our expert musher, Marius von Glahn.

As soon as we arrived we could hear the dogs frantically barking, excited at the prospect of their forthcoming run but first we had a quick tour around the Kirkenes Snow Hotel where the husky kennels are based. Each and every year, the wing of the hotel containing the bedrooms are freshly built from snow and an expert team of ice-carvers from China come and decorate the rooms in wonderful, sometimes rather bizarre, ice sculptures. 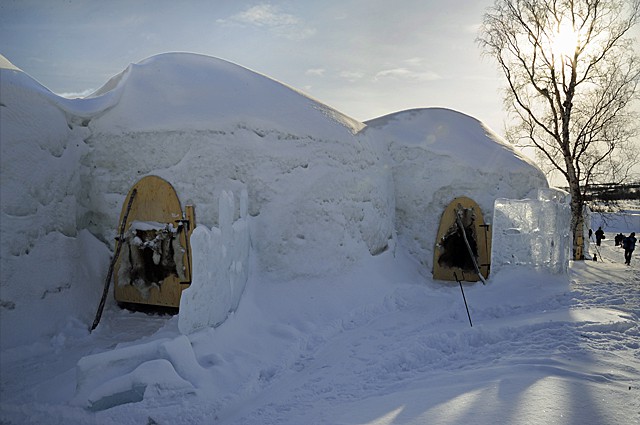 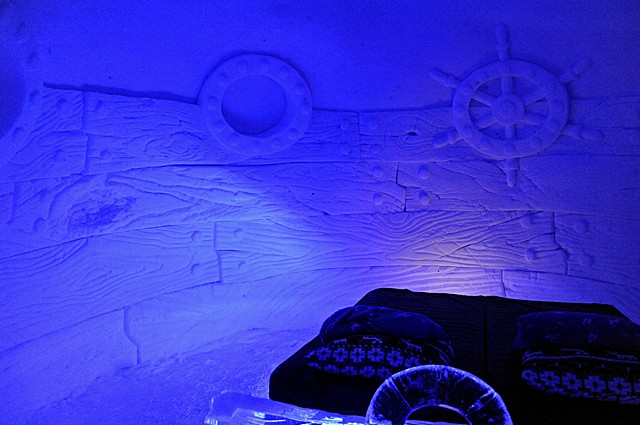 Riding with the huskies

After a delicious glass of warmed forest berry juice, including the wonderfully named, cloudberries, we went over to meet the dogs. An enthusiastic chorus of barking greeted us.

Leading up to this moment the weather had been unpredictable and the excursion the day before had been cancelled due to blocked roads but this morning the sun shone brightly in the bluest of skies over the freshly fallen snow. We really couldn’t have asked for more perfect weather conditions and this was the part of the voyage that I had most been looking forward to. More than seeing the northern lights, even more than seeing the beautiful snow-covered mountains and hills that line the Norwegian coast, it was the husky ride that I had dearly yearned for.

We were introduced to our musher, Marius, and his team of dogs and before I knew it I was tucked up under a blanket with fellow traveller, Alison sitting behind me. The dogs barking grew even louder as they leapt up and down in the air in their obvious excitement. With a shout and a flurry of snow we were off.

Nuk, Arktis, me and Alison (taken by Marius)

With nothing to hold onto I wondered how long I would actually stay on the sledge but our musher took us up numerous inclines, flying over bumps and speeding down slopes with the ease that only an expert could achieve and I remained on-board! The dogs led us through the trees and out onto the vast white expanse of a frozen fjord. I kept thinking how lucky I was to be here. Whizzing along the fjord on such a beautiful day was more than I could ever have dreamed of and as we turned and headed back towards the trees, just for a moment, I felt almost tearful with joy. 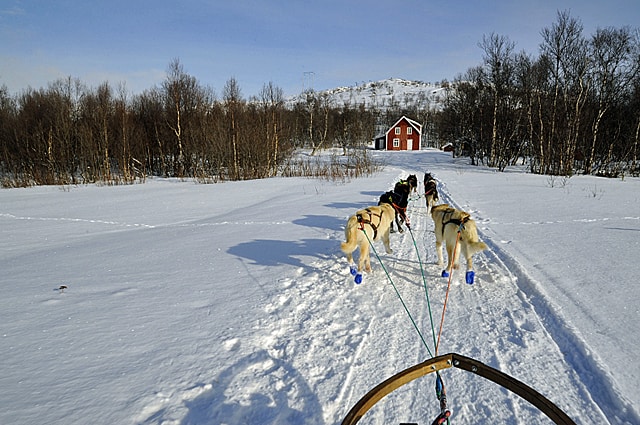 And then we were back a the hotel – the ride was over.

We thanked Marius and of course the dogs, clicked away taking a few more photos before heading back to the bus, beaming from ear to ear with a feeling of utter contentment. 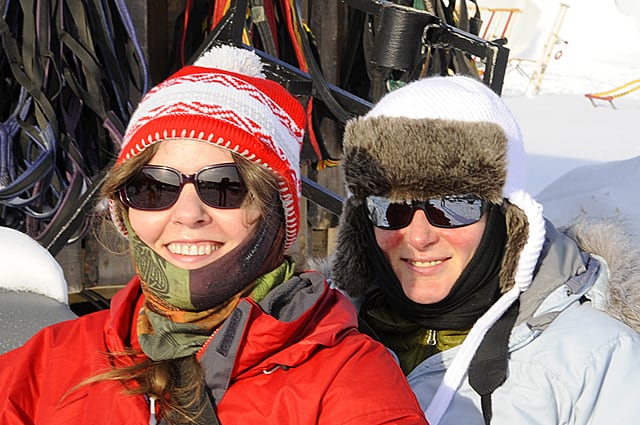 Me and Alison (taken by Marius)

Recommended for you: Things to do in Norway in Winter

Marius the musher and the huskies of Kirkenes

Marius, our musher, first started working with huskies at a kennel in Tana in 2011. This is where Nuk and Arktis were born, the two dogs at the rear of our team. Every now and then when the husky rides at the Snow Hotel were fully booked and they needed more dogs (so as not to exhaust the dogs based at the hotel) Marius and other local mushers were called in to help. In this way, as Marius pointed out, the guests, like myself, from the Hurtigruten boats, help support the livelihoods of local private mushers as well as those employed by the hotel. 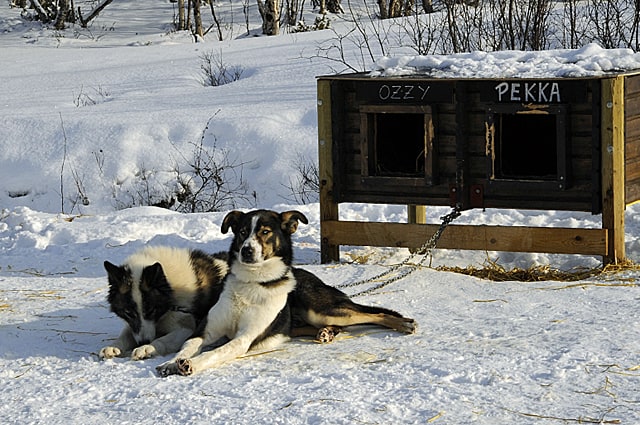 Having successfully applied to be a dog-handler at the Snow Hotel, Marius now also helps with other aspects of running the hotel, as well as feeding the dogs twice a day, keeping their huts and the yard clean and looking after the equipment. In the summer the dogs live in the Pasvik Valley and in late summer and the autumn the dogs are trained.

Marius loves working with the dogs but his favourite time of year is the autumn, when he can focus his attention on the dogs before the distractions of the winter season starts. 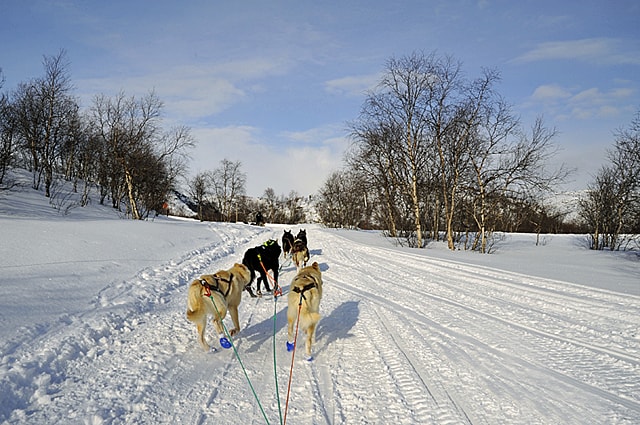 “There are moments when you feel nothing else other than being outside together with your dog-team. You forget about the concerns of daily life. You just feel. Moments when the Northern Lights show up, the moon is shining, the ice-crystals in the twigs are flickering, maybe an owl calls from somewhere and then you hear the breath of the dogs in front of you. It’s magic.”  Marius shared with me.

I asked Marius how old the dogs have to be before they start being trained and pulling the sledges.

“The youngest dogs pulling a sledge in this company are about six months old. But they are only pulling empty sledges and they are running very short distances.
You can also but a puppy, after a few weeks, into a harness, then you put a weight (for example a piece of wood) behind it and call it to you. When the puppy comes to you it learns to run against a weight on its back. It get’s used to that feeling and you can suggest to the dog that what it is doing is something good. Because it’s not in the nature of a dog to pull something, this can be quite important. I think the most important part is that the dog learns ‘It is fun to pull something. I want to do this.’ And the earlier the better.
Another way to prepare a dog for working as part of the team is by letting it run loose beside the team which is pulling the sledge.“ 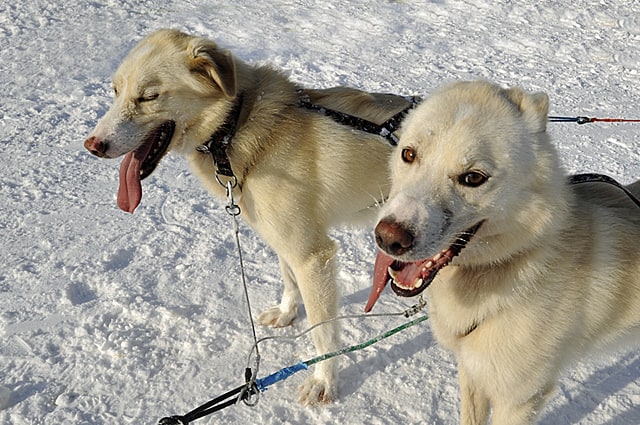 The Alaskan husky is at its peak between four to six years old and may compete in long distance races like the “Finnmarksløpet”. A lot of the dogs at the Kirkenes Hotel are retired racing dogs. We were at the kennels on a day that they were fully booked for the rides which means that some of the dogs run the course three times a day but they don’t let the younger or indeed the older dogs do this as it would be too much for them. The oldest dog still working there is 14 years old.

When we were out with the dogs we noticed when they stopped on the fjord that some of them started rolling in the snow. Dogs don’t sweat as we do to cool down so, as well as panting, they roll in the snow. 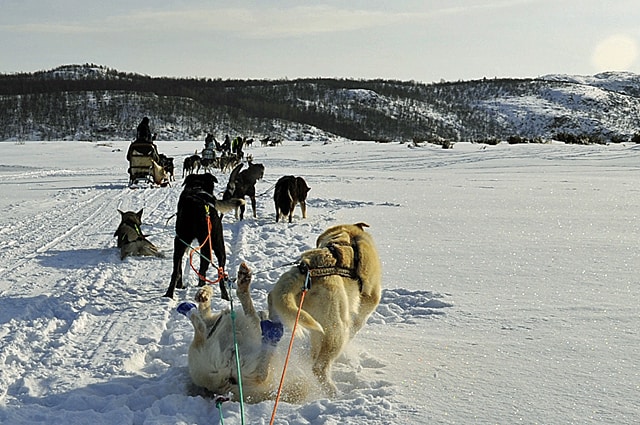 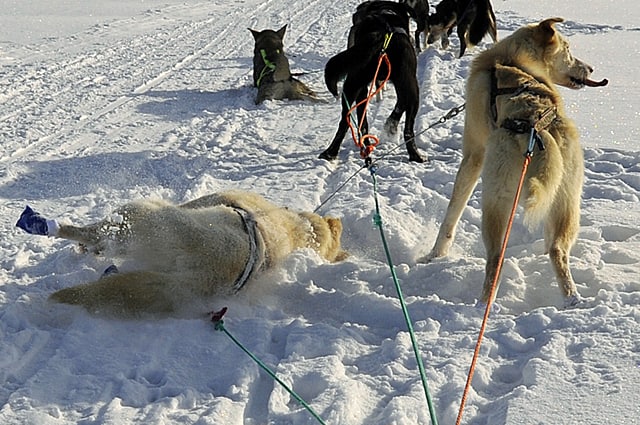 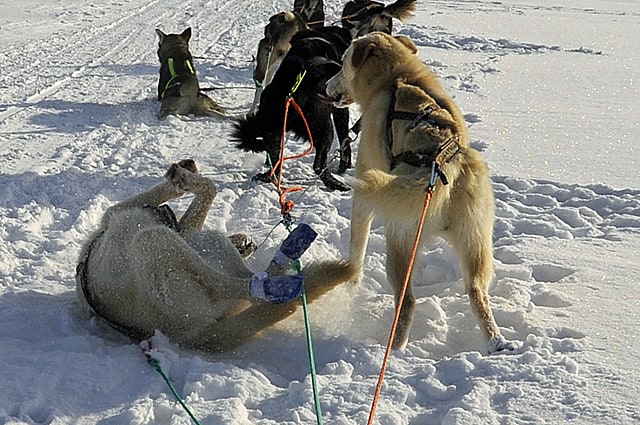 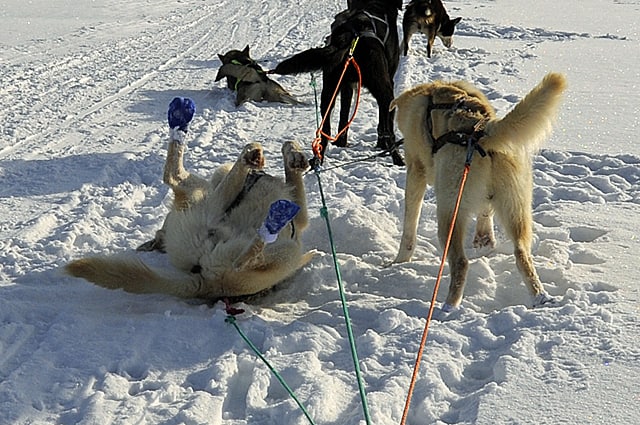 “The lead-dogs represent the musher. Their task is to show to the rest of the team, where the musher wants to go. The dogs in the in-point-position (right behind the lead-dogs) can assist both parts.
The dogs at the back of the team help mostly to pull (note the blue socks they are wearing on their rear paws to help protect them). But every dog, in every position, is an important part in this dynamic ‘puzzle’ to create a harmonizing team.”

Most days the dogs have three 5km runs each morning with the guests from Hurtigruten. The kennel also offer longer trips in the afternoon and in the evening so some dogs go out again but they always try to use well-rested dogs and when they are at their busiest they call on the private mushers from Tana to help so that none of the dogs are over used.

I also asked Marius what he liked best about living in northern Norway. “The nature, especially the bird-life!” and the least “The smoked salmon you can buy here in the super-market tastes so very good but is very expensive.”

And so this part of the adventure was over but I’m sure this is a day I will never forget. I’d like to say a huge thank you to Marius for a fantastic ride and for answering all my questions and, of course, to Hurtigruten for making this all possible, truly a dream come true!

You can see more of Marius’ photographs and read about the huskies, as well as the wildlife of Norway, on his blog Von Hunden und Vögeln (On dogs and birds). 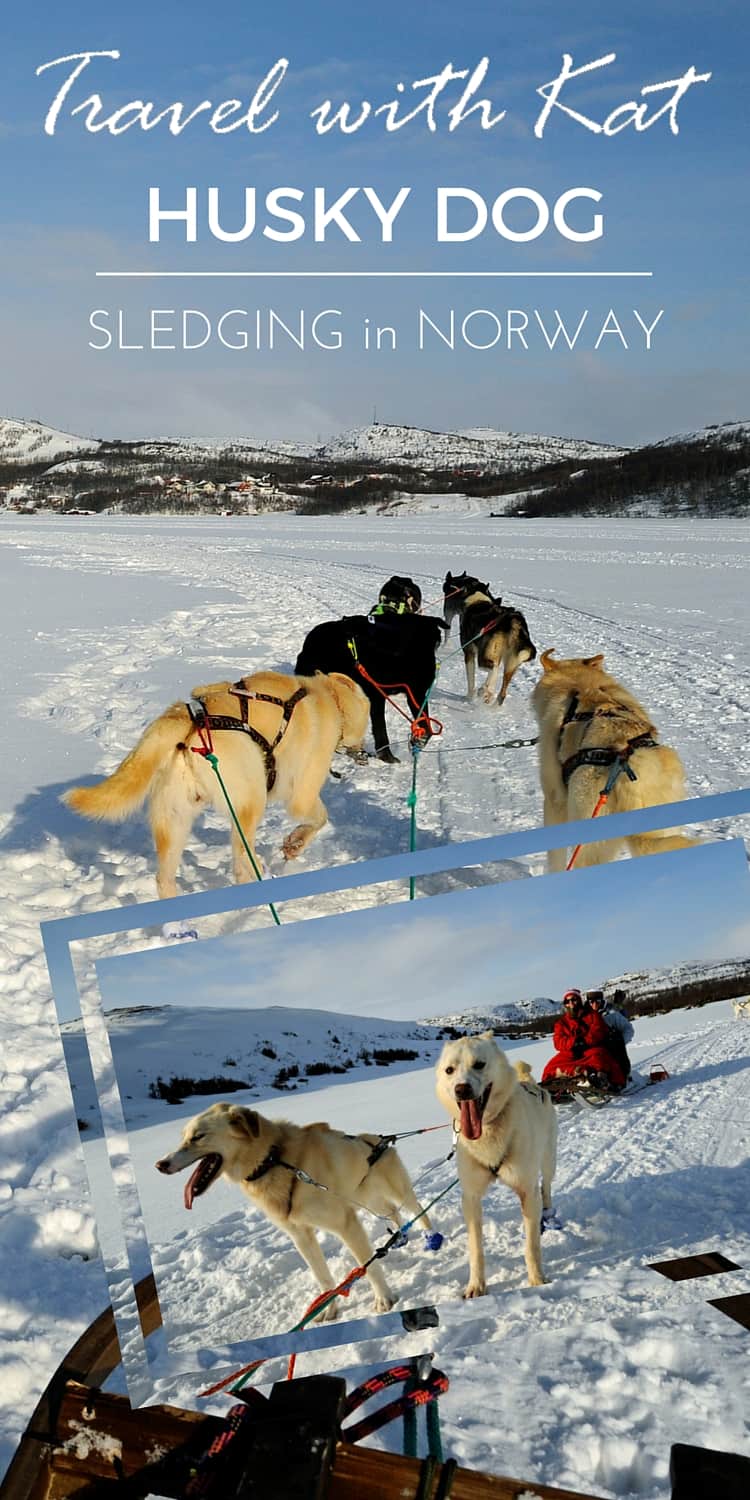 Disclaimer: While I was a guest of Hurtigruten during my time in Norway, all opinions expressed are my own honest thoughts.