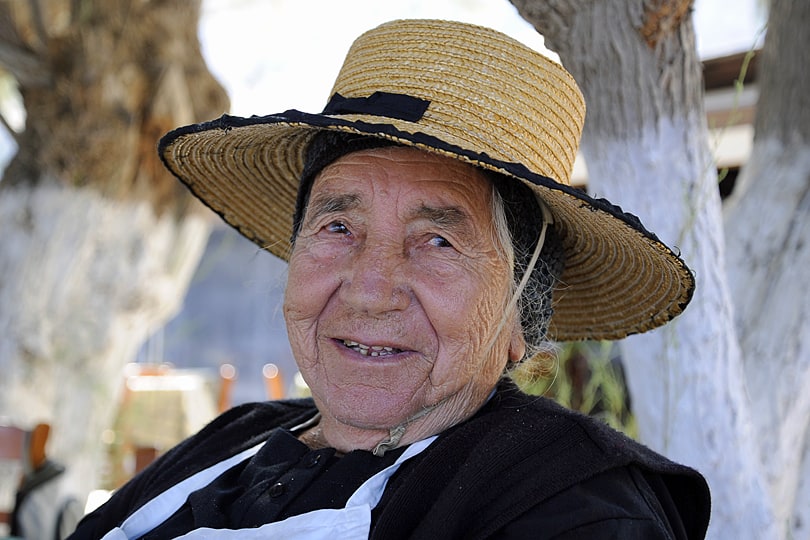 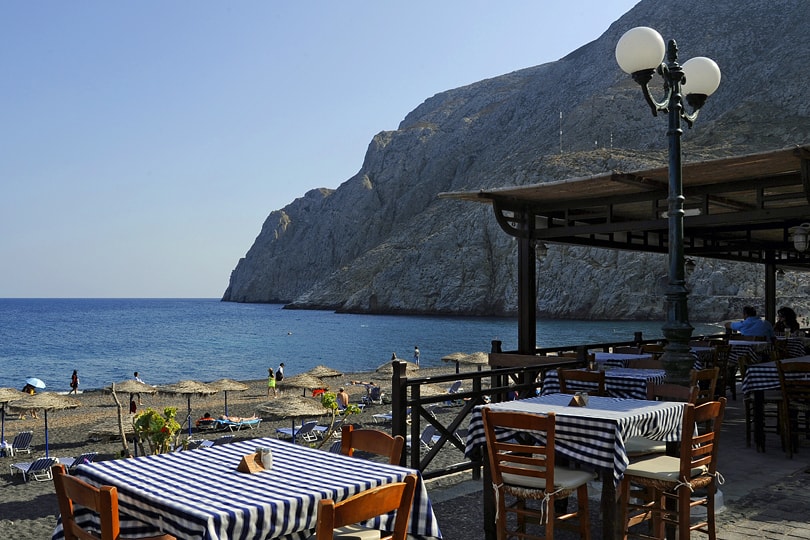 Walking along the seafront at Kamari on the east coast of Santorini, I hear someone singing, an older voice, soft and sweet. Dressed all in black, as is the tradition for widows, her face shaded from the sunshine by a wide-brimmed straw hat, the singer, Irini, returns my smile. She sits at a vantage point so as to watch the comings and goings at her restaurant of the same name. A waiter calls to us “We’ve live music tonight and the best food in Kamari!” We assure him we’ll return. 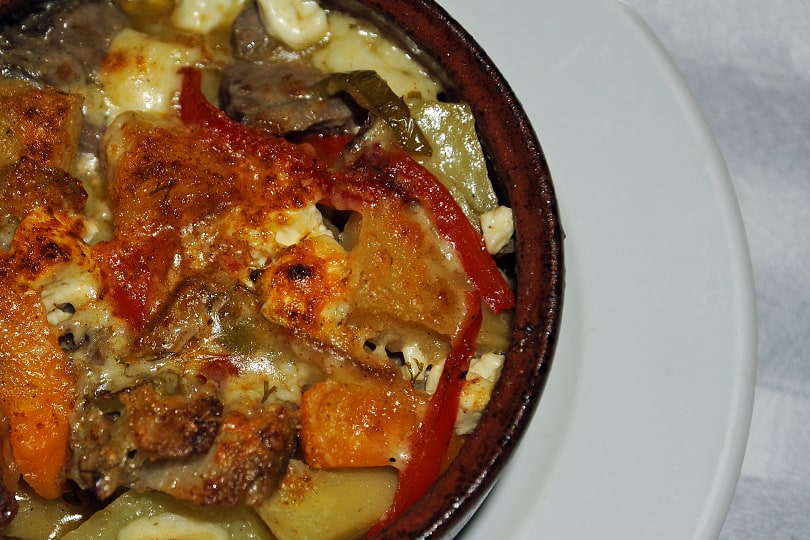 Later that day my sister and I wander along the lovely prom that runs adjacent to the black volcanic sand beach back to Irini’s. As I tuck into a tasty pot of mousakka, Adonis and Vagelis play a bouzouki and a violin. Irini joins in singing from time to time, interspersed with a smile and a nod to the occasional passerby. And then she is dancing, slowly moving to the gentle beat. I get up,  I can’t resist the music. Holding hands we dance.

The next day Irini and I have a wonderful chat, sitting outside her restaurant, under the shade of a tamarisk tree, as a salty breeze softens the heat of the day.

She has quite a tale to share and I’m curious to know what Kamari was like when she opened her restaurant nearly fifty years ago. 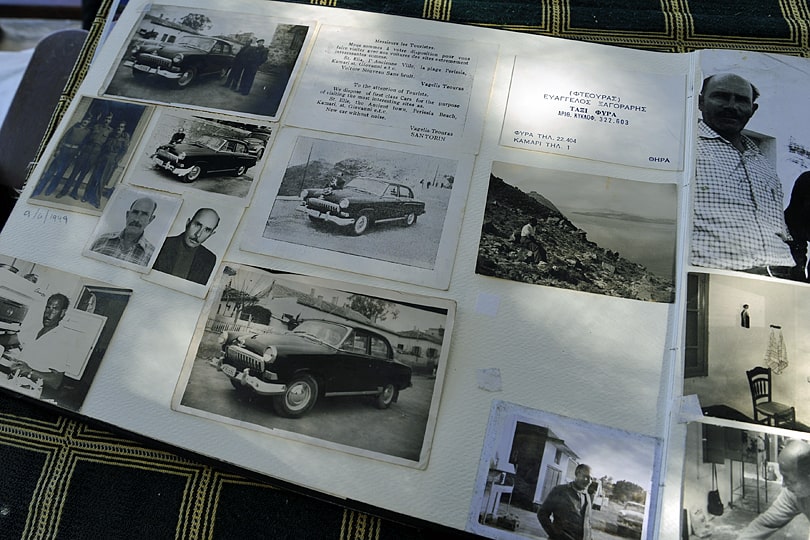 When first married Irini left the island to work in Athens, saving hard so that she could buy her husband a car, the first on the island, she tells me. Before they know it this investment turns into a taxi business driving around the island along dirt tracks designed for donkeys. In the 60s the first tourists start to arrive on Santorini, mainly students including Germans and English, sleeping on the beaches. Occasionally Americans also visit, returning to the island they remembered from the war. 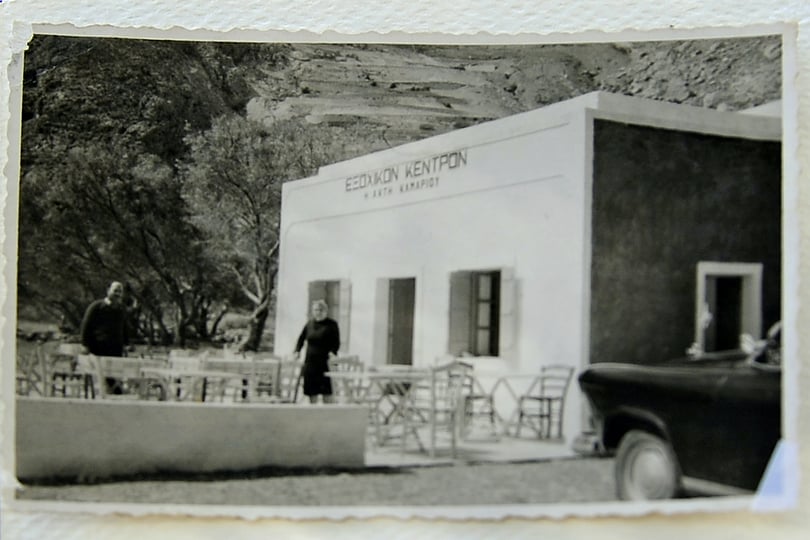 In 1965 Irini rents a small building off the local fishermen, by the beach with a dramatic backdrop of the massive rock, Mesa Vouno, rising out from the sea. Here she opens the first restaurant in Kamar selling local food such as seasonal salads, stifado, moussaka, fava and domatokeftedes, a speciality of the island. These delicious fritters are made with tomatoes, for which the island is well-known, courgettes and onions plus flour and a variety of herbs, most often mint.

The first hotels followed in the 70s. The builders, with big appetites, flocked to Irini’s and the restaurant thrived. If someone in the village had a special occasion to celebrate such as a wedding, they’d celebrate it at Irini’s.

I was surprised to hear that up until then they had no electricity or running water, both of which didn’t come to Kamari until 1972, all thanks to Irini I’m told. She even built the lovely cobbled promenade in front of us, quite literally. And I can well believe it. She’s an indomitable lady. 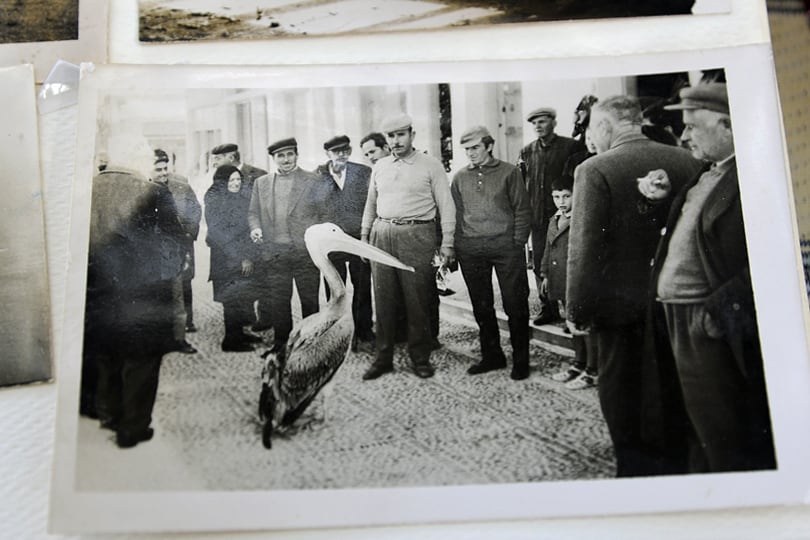 Irini goes on to reminisce about the esteemed patrons she has fed over the years, including the country’s former President Konstantinos Karamanlis, the shipping magnate Onassis, the silent screen star Charlie Chaplin and a pelican with a broken wing that simply arrived one day and stayed, becoming a regular sight by Irini’s side, she tells me. 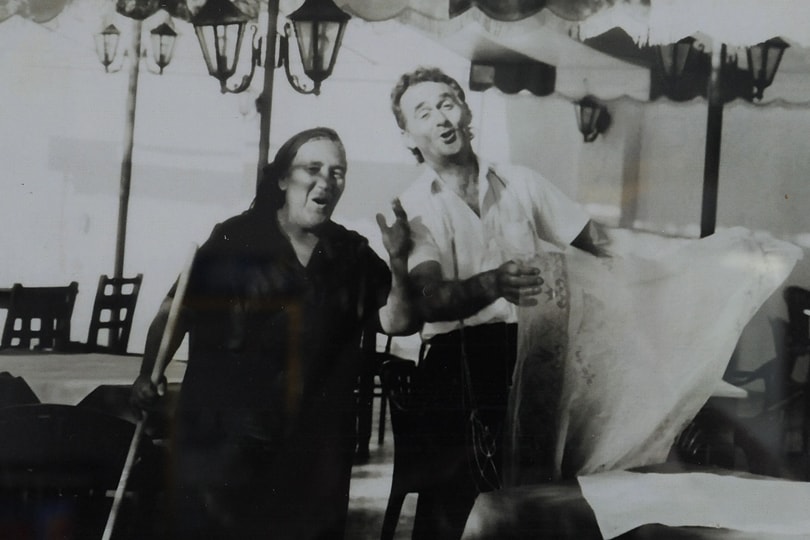 Sitting in the dappled sunshine we look through some old photo albums. She shows me images of the restaurant, herself, family and friends, her pelican, Charlie Chaplin… What better way to spend a sunny Sunday afternoon on Santorini, than chatting with Mama Irini? 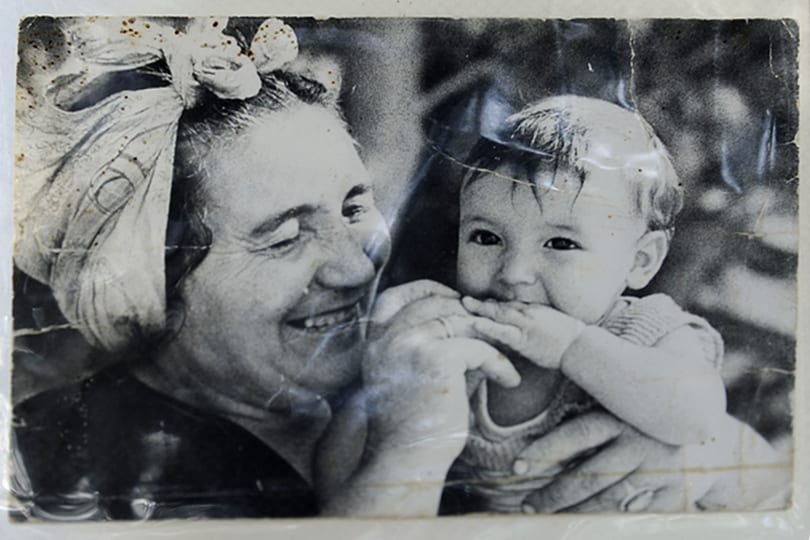 For more information about Irini’s Restaurant (and rooms) please visit their website.

Oia! No, not a shout for attention but a stunningly beautiful, white-washed village in Santorini (pronounced something like 'here' but...