Exploring Kerala, on and off the beaten track 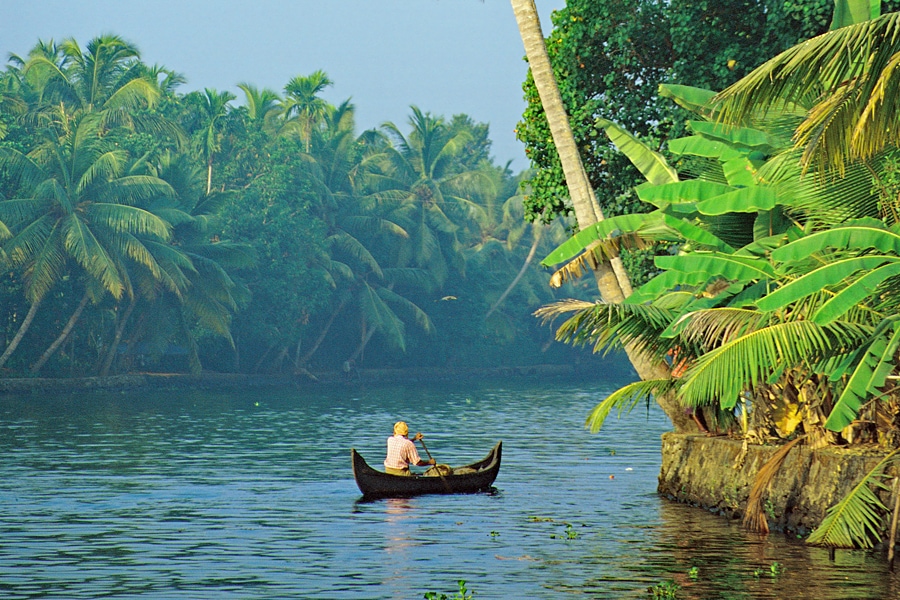 In 2005, long before I started blogging, I visited India for the second time on a two week Tamil Nadu and Kerala tour with a fantastic friend of mine, Annie, her husband and a few friends. She is addicted to India and has a knack of finding the loveliest, sometimes quirkiest hotels. Not to mention, the most interesting places to visit, some on the mainstream tourist routes and others very much off the beaten track. Having spent a week in Tamil Nadu, we headed to Kerala on the west coast of India. It has over 370 miles of tropical palm-fringed coastline lapped by the Arabian Sea. It’s famous for its network of waterways, a series of canals known as the backwaters. Inland on the slopes of the Western Ghats, tea, coffee and spices grow and monkeys, elephants and tigers roam the national parks. By the end of our two weeks in India, I felt I had been on the adventure of a lifetime. Let me introduce you to some of the most spectacular places to visit in Kerala, on the second leg of our journey.

Having driven from Tamil Nadu to Kerala, we were staying in a village deep in the jungle-covered Cardamom Hills of the Western Ghats. The area is known as the gateway between these two states of Southern India. 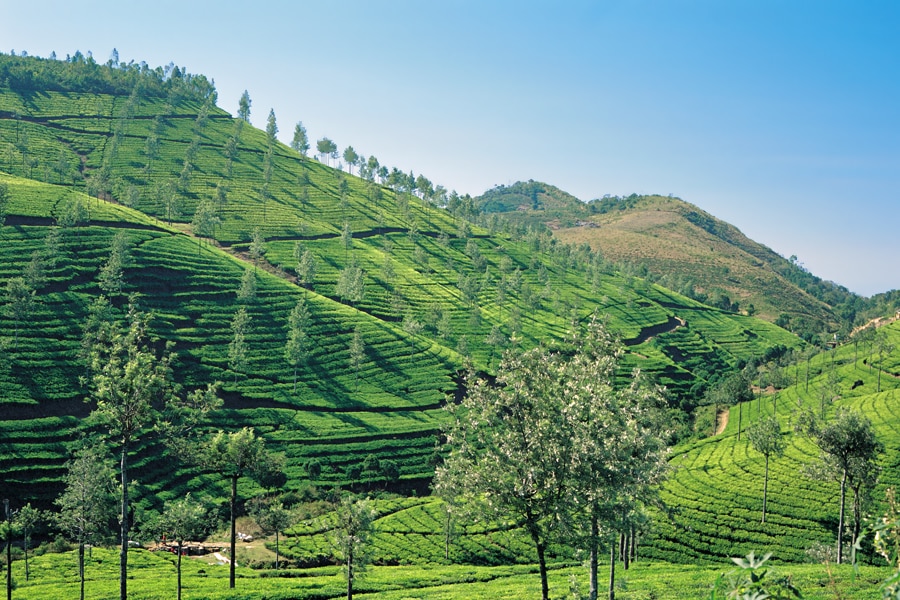 Here tea, coffee and spices grow in the rolling hillsides, the lines of terraces stretching out into the distance. We visited plantations and took a boat ride on the man-made Periyar Lake, where we were treated to the sight of a herd of wild elephants. Sadly, we didn’t see any of the Royal Benegal tigers that roam the virgin forests of the Periyar Tiger Reserve. But we did have an unexpected highlight of a very different nature while staying in the area.

An unexpected invitation to dinner


After a lazy morning swimming and shopping (I’m not much into shopping in the UK, but I turn into a shopaholic in India!), I met up with the others from the small group I was travelling with for lunch. They had a far more active morning than me. Walking in the jungle, they’d stumbled across a village, and we were all invited back for dinner.

Later that evening, we clambered into the van, and after a short drive, we walked into the jungle. It was completely dark now, and we had just a couple of small torches to light the way. I didn’t have a clue where we were going or what to expect when we got there, but I had complete faith in our guide. As we walked deep into the jungle, the sounds of the forest all around us, Carol, from our group, was getting nervous. I was getting excited!

I could see some lights in the distance ahead of us. A few paces further and I could make out some flickering flames. A small group greeted us as we entered the village. In the light of the fire from numerous torches, they sang and danced for us. They wore make-shift costumes and headdresses of leaves and anything else they could find with their faces blackened. We sat down and tucked into a variety of cooked root vegetables served on a banana leaf (some which were quite tasty and others a little hard to eat), and the dancing continued. 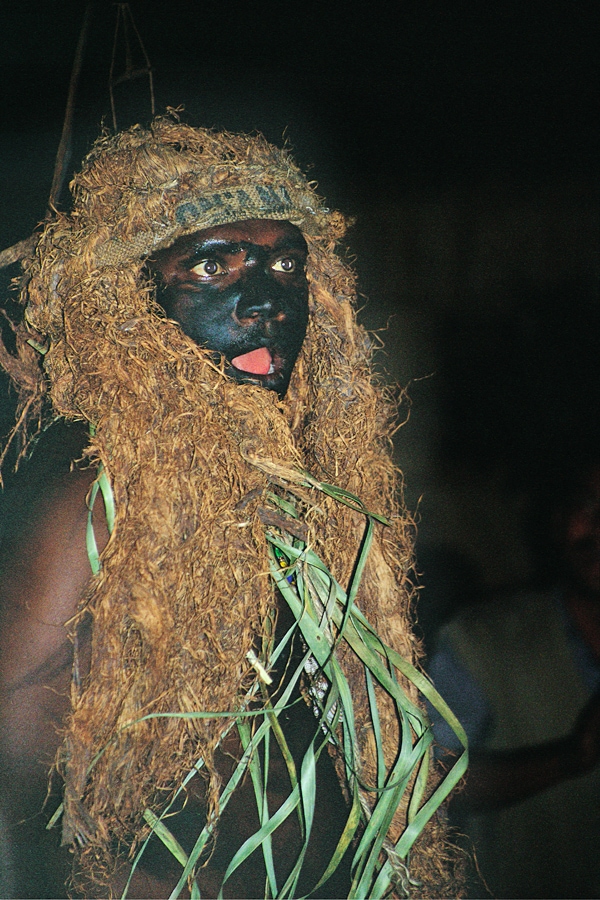 The villagers said we would bring them great luck and seemed genuinely as excited as we were. They had never entertained westerns before. Interestingly, all the villagers present were men. The only woman we caught a glimpse of was the chief’s wife peeping through a crack in the fence.

It was a memorable evening and a wonderful contrast to a few nights before when I’d been dining with the Raj of Thanjavur. I still can’t believe I spilt a bowl of soup over him… but that’s another story!

Another highlight of my tour of Kerala, and possibly the most memorable of all, was a beautiful couple of days floating along the backwaters on a converted rice boat.

We sat out on our houseboat, we hardly saw any other tourists, but since then the location has become top on everyone’s wishlist of Kerala destinations. The pollution from the boats has become quite a problem, impacting on the local way of life. They rely on the water for drinking, cooking, bathing, and fishing. I feel fortunate to have visited when I did when the region was incredibly tranquil, and our presence made little impact.

I sat for many hours at the front of the boat, simply watching the world go by. There was always something new to see. As you can imagine, I took many photos. One of my favourite images brings back the calm and serenity I found drifting along the water in God’s own country, as Kerala is known. 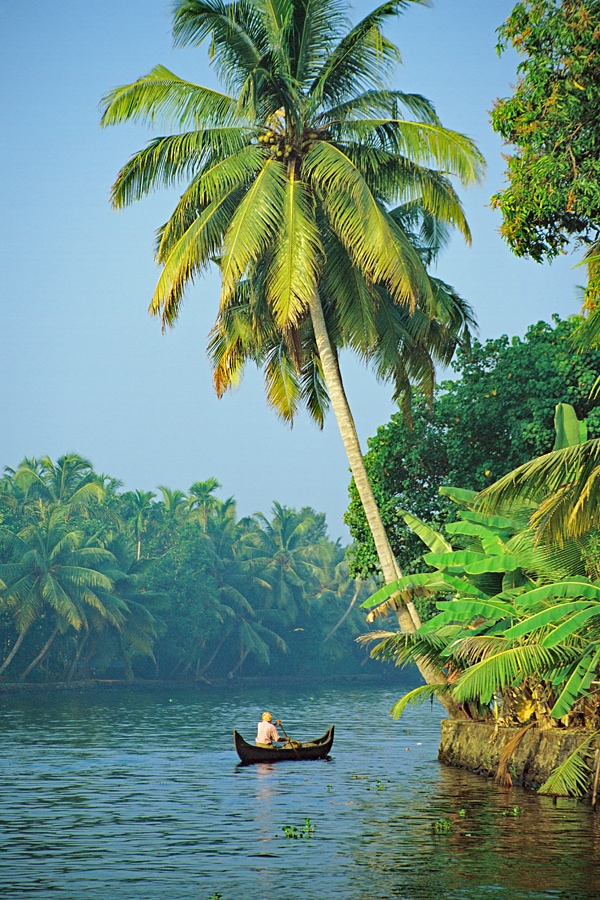 From my vantage point, I could observe everyday life in Kerala. Children were going to school, women washing pots and pans and men fishing. 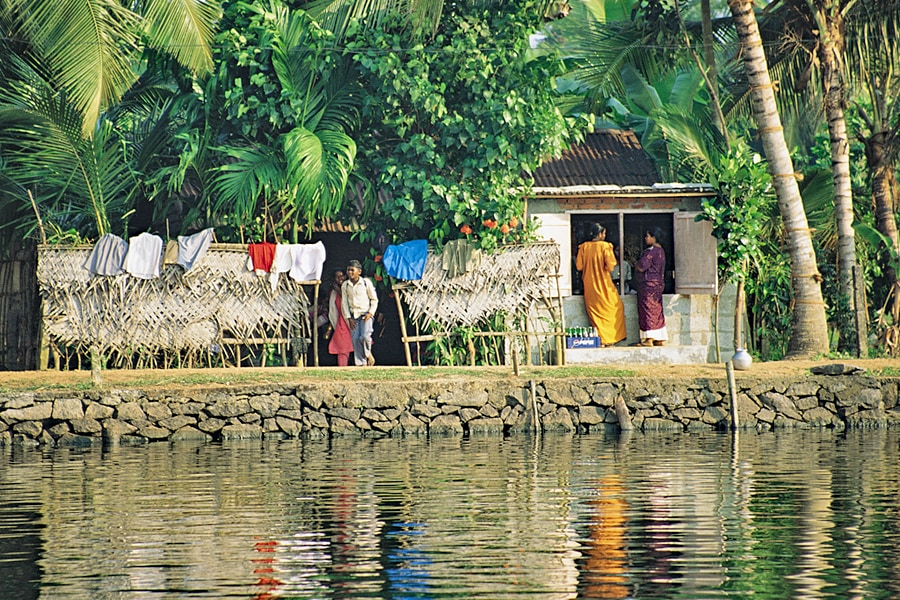 Before dusk,  we moored up and took a walk along the banks of the waterways. We had the chance to chat with a few locals who all seemed happy to meet us. Young and old alike were as interested in us as we were in them. 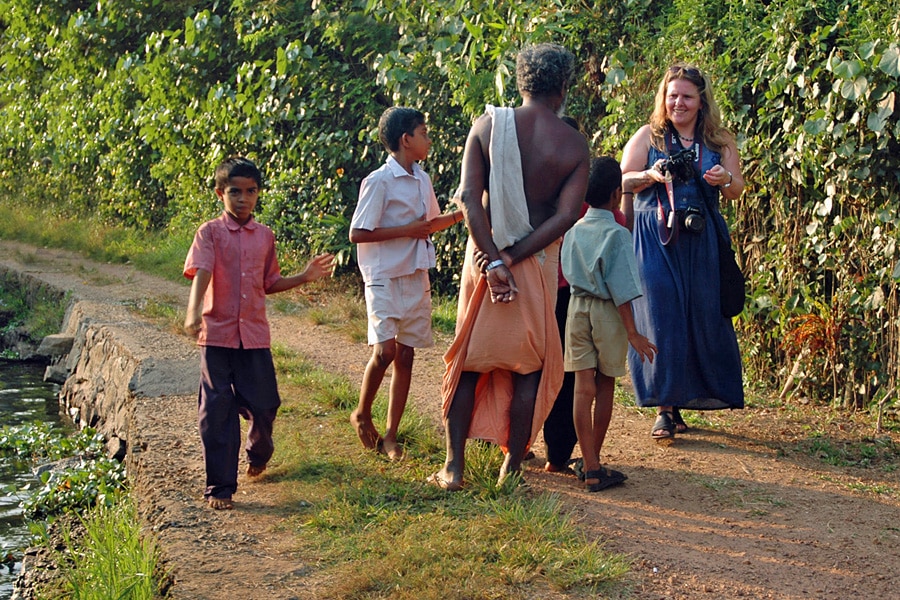 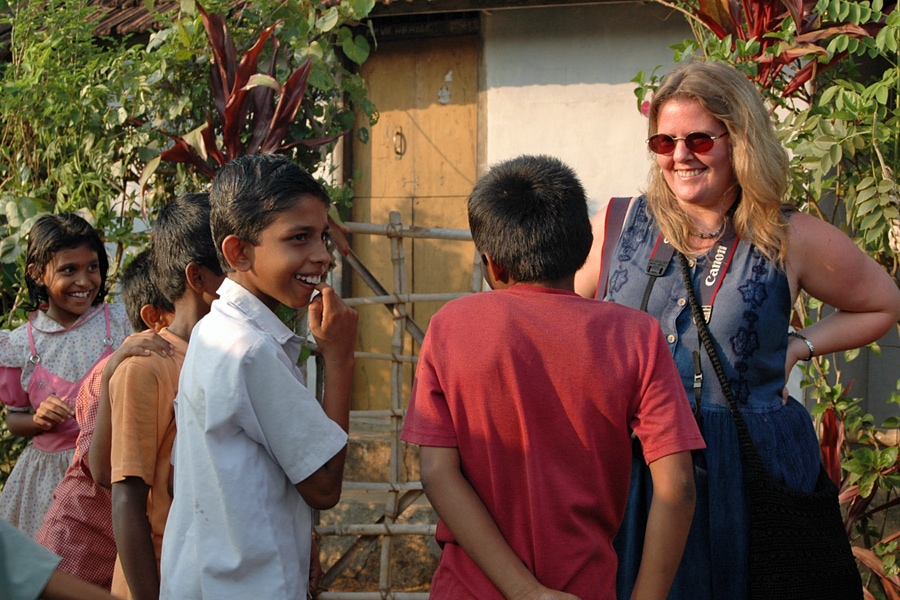 I fell asleep as the boat gently rocked to and throw. In the morning, we rose early to catch the sunrise. 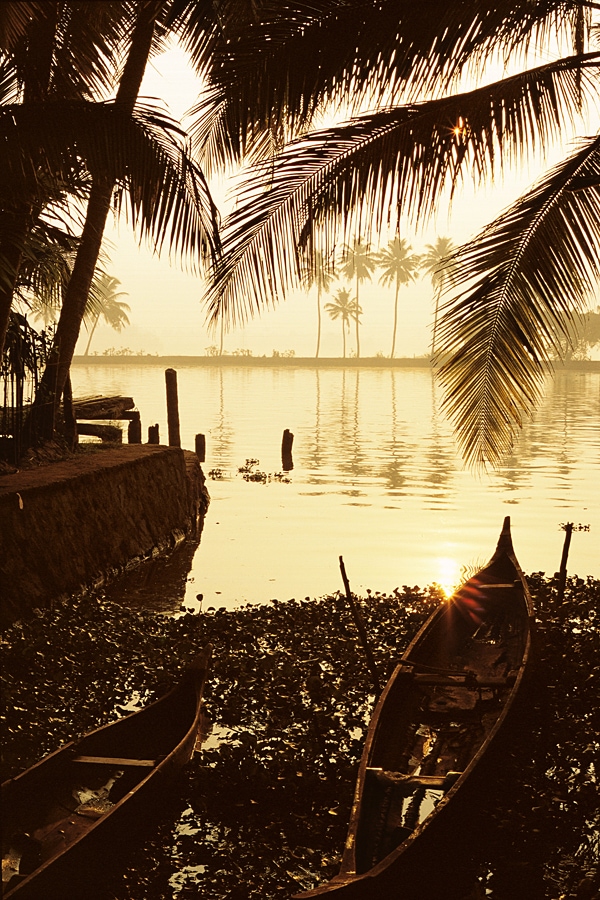 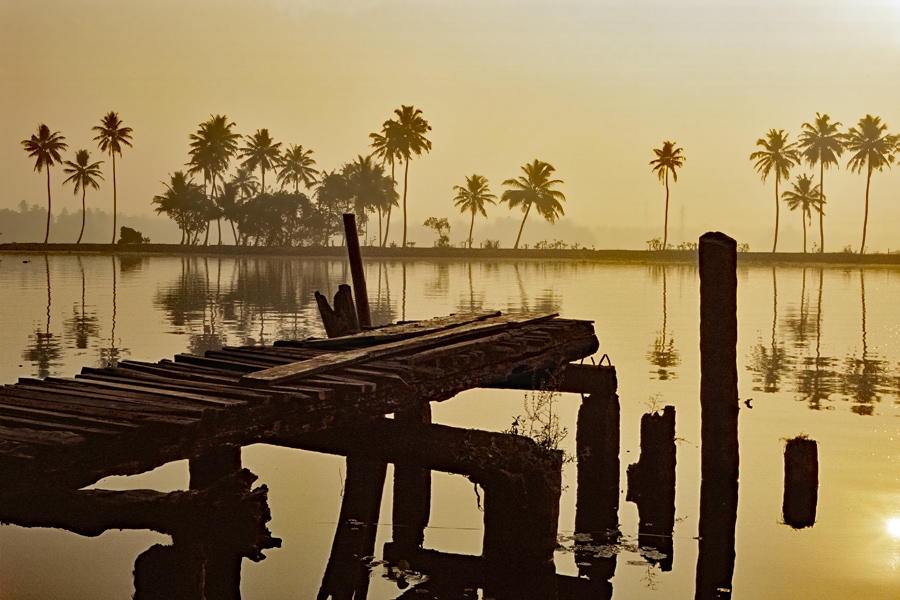 All too soon it was time to leave the backwaters and head off to our next destination, our final stop on our Kerala tour.

Find out more about how you can enjoy a memorable trip on an Alleppey Houseboat, a unique experience in Kerala or check out this blog post for a full two week Kerala itinerary.

More recently, I enjoyed a similar experience on the waterways of Goa staying in a converted rice boat. It reminded of the Kerala backwaters of old, how it was before it became such a tourism hot spot. But for now let me take you back to a sleepy, little known Kerala before the tourist invasion. I’m sure there are still parts of the backwaters that remain undisturbed. I certainly hope so.

Having explored temples in Tamil Nadu, dined with a Raj in Thanjavur, drifted along the backwaters and so much more my two weeks in India, touring Tamil Nadu and Kerala were coming to an end.

Our final stop Kochi, formerly known as Cochin, is on a group of islands namely Willingdon Island, Fort  Kochi, Mattancherry and Mundamveli. It’s the perfect place to end our Kerala tour, a vibrant, exciting city steeped in history.

On Mattancherry, we visited the spice markets where the scent of a myriad of spices – cinnamon, cardamom, clove, nutmeg, saffron and mustard – permeates the air.

In the historic district on Fort Kochi, the influence of the Dutch, Portuguese, British and Jewish was evident. Don’t miss the Church of St Francis, India’s oldest European Church, the Santa Cruz Basilica and the Dutch Palace which was built by the Portuguese and presented to the Raja of Kochi, in 1555 AD.

The Kathakali dancers of Kochi

On our last night in India, Annie suggested we see a traditional performance of Kathakali. This classical Indian dance form dates back to the 17th century, although it may be much older.

As we took our seats, the all-male performers put on elaborate make-up, masks, headdresses and costumes, all part of the show as important as the performance itself. The bright colours and patterns of the make-up and costumes were a joy to photograph. 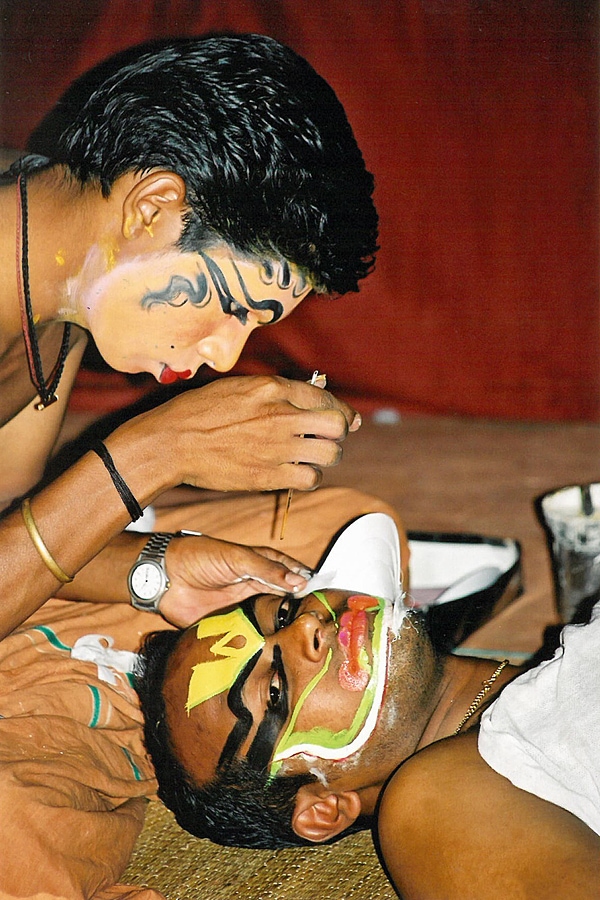 Through dance, a story unfolds, a tale from Hindu epics of good versus evil with gods and goddesses, evil spirits, saints and animals. The colour of the face make-up is a guide to the character being played. For example, Gods have green faces and women have yellow faces.

There are three groups of performers. The actors, who never speak, the musicians and the narrators. During the show, the actors convey their story through intricate choreography, hand gestures known as mudras, and facial expressions or bhava. It takes years of training and discipline to build the strength, stamina and skill to perform Kathakali. 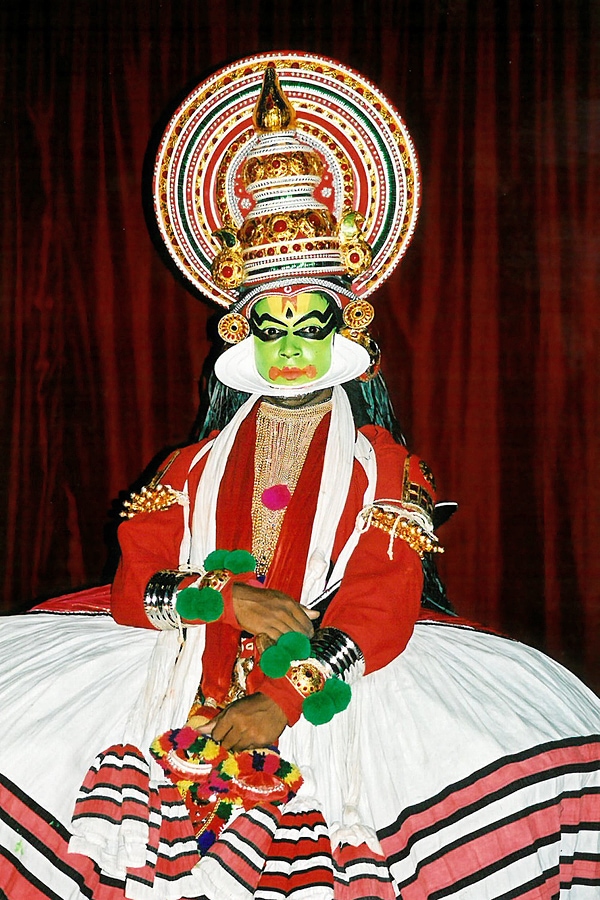 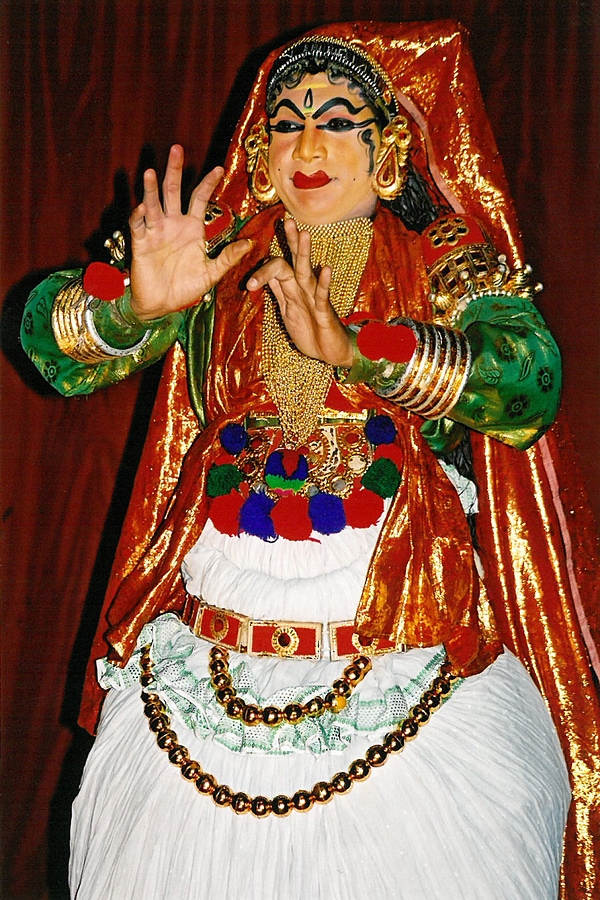 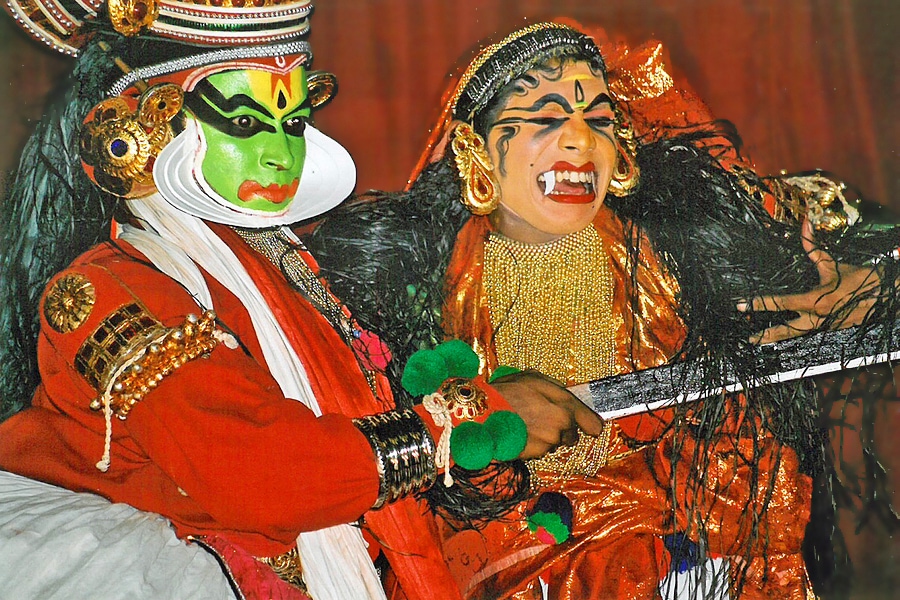 We couldn’t have asked for a more spectacular end to our India adventures. The next day, a bus ride, two planes, a few trains and a taxi ride later I was back home again in England, already yearning to return to India.

1. When to visit Kerala

The most popular time to visit Kerala is from the beginning of December through to the end of February as these are the coolest and driest months. It is the busiest time of year, and prices are at their highest. March, April and May get progressively hotter and more humid. June to August is the peak of the monsoon season and best avoided, although this is reputedly the best time to enjoy Ayurvedic treatments, an ancient natural healing practice dating back over 5,000 years. There used to be a second monsoon season in October but these seem to be becoming a thing of the past. November is a fabulous time to visit when the waterfalls are flowing rapidly in lush green countryside.

2. What to pack for Kerala

Take loose-fitting, light cotton clothes to help you keep cool with long sleeves and full-length dresses and trousers to help prevent mosquito bites. Be sure to pack full strength mosquito repellent, and you’ll need to take anti-malaria medication. Other essentials include a hat, sun cream and sunglasses to protect from the harmful rays of the sun and comfortable walking sandals. A universal travel adapter will be handy too.

Hopefully, you’ll never need it, but if you love travelling your almost bound to sooner or later. Whether its lost luggage, flight delays, minor illnesses or something more serious, you’ll be glad you have it when the unexpected happens. World Nomads cover travellers from over 130 countries and are particularly suited for long term travellers or shorter single trip breaks.