La Gomera, the ancient forests on the island in the clouds

Over 12 million years ago a series of oceanic rifts allowed molten rock to vent onto the floor of the Atlantic Ocean. As they piled higher and higher a series of islands formed off the north African coast. Today they form Spain‘s Canary Island’s.

One of the last islands to emerge from the ocean was La Gomera rising 5,000 feet above sea level. During the Ice Age while much of Europe froze, heavy rains lashed the island and powerful rivers carved out deep ravines, forming a dramatic landscape. With the passing of the years the island became drier, creating semi-desert conditions around the lower slopes while high up in the mountains laurel cloud forests thrived, and still do today, with many microclimates lying between the two extremes.

The Garajonay National Park, a UNESCO World Heritage Site lies in the centre of the island around its highest peak. This densely wooded region is almost always shrouded in mists and clouds as it was on the day I was there. Wondering alone along the trails through the forest of laurel and heather trees felt quite surreal, as moss-covered branches stretched out into the mists each dripping with the water that condensed on them from the clouds. Lush green ferns covered the forest floor, vivid green in the streams of sunlight that occasionally broke through the mists. It’s mysterious, beautiful and rather creepy at times but I can see why this National Park is a great draw for hikers and the views if you are lucky enough to be here on a clear day, are spectacular I’m told.

Millions of years ago laurel forests once covered much of southern Europe but now they exist only on a handful of islands in the Atlantic.

Bananas are a major source of income for the islands which is covered in plantations. It rarely rains so the plantations are irrigated by collecting the condensed water from the higher slopes and channelling it down the mountainsides.

Palm honey is another traditional product of the island made from the sap of the Canary Island palm trees which is boiled down to a thick, sweet syrup, similar to honey. It was traditionally used medicinally, particularly for sore throats, but is also now being marketed as a gourmet culinary product. None of the other islands of the archipelago has ever made palm honey and the government have now declared that it can only be made on La Gomera. There are very strict laws about looking after the palm trees and if you accidentally kill the palm by taking too much sap there is a heavy fine, that is assuming you have a licence to collect the sap. If you kill a palm and you haven’t got the right licence you will be given a custodial sentence.

The whistling people of la Gomera

The original inhabitants of the island, the Guanches, used an ancient whistling language, Silbo Gomero, that can be heard up to 7 kilometres away, to communicate across the ravines. When the Spanish conquered the island in the 16th century they adopted the whistling language and it was still used long after the Guanches people were assimilated.

On the verge of dying out the government passed a law stating that every child between 8 and 13 should spend 2 hours a week learning Silbo Gomero. I was lucky enough to catch a demonstration in a charming restaurant clinging to the mountainside. To show that they were really communicating, while one of the locals left the room, me and a few other people were asked to give an item to someone else in the large dining area. As you can see from this short video clip when the man returned it didn’t take long for them to communicate, firstly where each item was and then to whom it belonged to. I was soon reunited with my camera bag. 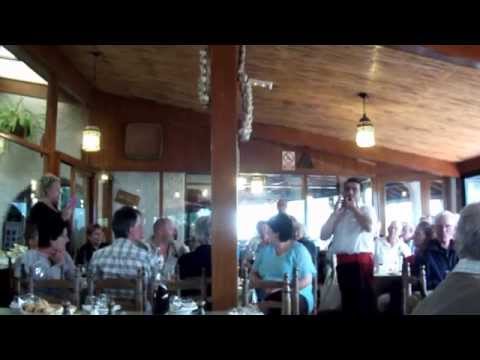 San Sebastián is the island’s capital and is a charming town to explore. While it may have been chilly up in the mountains, here by the coast it was lovely and warm with clear blue skies and barely a cloud in sight. I had little time here, just enough to stroll down the main street and make a flying visit to the house where Christopher Columbus is said to have stayed during one of a number of visits to La Gomera, where his ships took on provisions before setting sail for the Americas.

Sadly my visit to La Gomera, one of the seven main islands that make up the Canaries, was all to brief. I would love to spend more time there one day. I might even get a glimpse of La Gomera’s giant lizards that grow up to half a metre in length. These were thought to have been extinct until a few individuals were discovered in 1999, when steps were taken to save the species including a captive breeding plan. A census in 2009 found around 160 individuals in the wild. Progress has been slow but it is heading in the right direction at least.

My one day on La Gomera, a magical and mysterious island steeped in history, was over all too quickly as I caught the boat back to the nearby island where I was staying. That too, however, had many surprises for me, not least the dramatic landscapes, as I explored in search of a different side to Tenerife – a side that many visitors never see. I’m looking forward to sharing it with you.

Disclosure: I was invited to visit the Canary Islands by the local tourist board, however, this was not a formal press trip and I was entirely free to do, and indeed write, whatever I wish. As always I will give you my honest opinion throughout this series of articles.