Have you ever dreamt you were flying? I certainly have. As I skimmed over the treetops it was as if my dreams of flying were finally coming true. This ride on England’s longest and fastest zipline, however, wasn’t the only adrenaline-inducing experience I was going to have that weekend at the Eden Project. The weather had quite a surprise in store for me too.

My weekend started with a very wet and blustery walk to see if the Eden Zip Wire was running. I was booked in at 10 am and was gutted when I found out the wind speeds were too high for it to be safe. There would be no hurling myself from a tall tower today.

I had arrived in Cornwall the day before and spent a cosy night in a YHA Snoozebox just a short walk from the Eden Project. It had been tipping down with rain ever since as Storm Imogen engulfed the south of England. For my flight over Eden to take place, I needed a gap in the weather. I re-booked it for the following day, somewhat doubtful that it would happen.

I was in Cornwall with the London Rainforest Choir and despite the weather, we had a wonderful time singing in the rainforest biome but I had been planning the zip wire ride for some time and it now looked highly unlikely that I’d be able to do it.

To be honest I wasn’t sure how I would react to whizzing through the air, at speeds of up to 60 miles per hour, along the longest zip wire in England, some 660 metres long and, at its highest point, 97 metres off the ground. That’s high. Very high. The only zip wire I had done before was very tame in comparison yet when I had got stuck on it I had been extremely scared.

Overcoming my fear of heights

So why did I want to do the Eden Zip Wire? I’m really not sure. But I had caught a bug and I wanted to push myself to really overcome my fear of heights. I’d challenged it a few times over the last couple of years. It started with a climb to the top of the tallest tower in Bologna. I then climbed the 528 steps to get a A bird’s eye view of London from St Paul’s. It was a tree top adventure in Slovenia, however, that really seemed to be the turning point and my love of zip wires was born. If you watch the video, The Day I got Stuck on a Zip Line in Slovenia you can see I’m not a natural when it comes to heights.

When Sunday morning finally arrived the gap in the weather did too and I caught a glimpse of blue sky above Eden.

Fingers crossed my zip wire ride would be on. But how would it actually feel to fly over the top of these domes? I really wasn’t sure. Would I love it? Or would it be terrifying?

The meeting point for the zip wire was actually outside the Eden Project itself (so you don’t have to pay the Eden entrance fee to do the zip wire). Having been encased in a rather complicated harness we were driven round to the start of the wire, a wooden tower overlooking the Eden Project. Su and Milo and some other friends from the choir had decided to join me. We had a safety talk and then walked round to the wooden tower. I seemed to be the only person who was at all nervous but I was very reassured that our instructor had once been a health and safety inspector in the Royal Airforce, as well as for a number of prestigious venues in London. One by one my friends took flight and then it was my turn.

As I stepped up on the platform the view across the biomes with the sea beyond was spectacular. I lay down in my harness, putting my life entirely in someone else’s hands. I listened to the instructions and finally safety checks. Three, two, one and I’m whizzing through the air, high above the people below.

The ride lasts about a minute and roughly halfway through I started turning sidewise. I felt my heart rate rising but I knew I was in good hands and trusted that it would right itself. I suppressed my fears and before long, and much to my relief, I gently swung back to face forwards again. As instructed I put my arms down to my sides making me more aerodynamic. As I picked up speed the treetops got closer and I headed face-first towards the ground. With a jerk, the break kicked in as I reached the landing point. 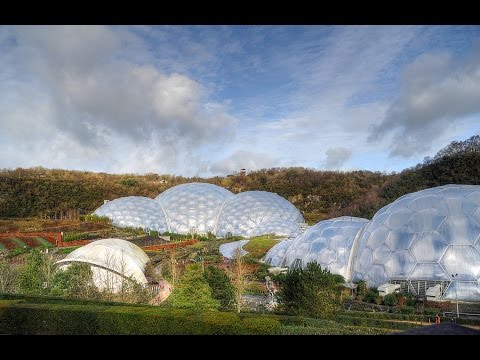 It was a thrilling experience. One I’d love to repeat. The great height at which you start the ride really wasn’t as scary as I feared it might be. It was actually worse as I got closer to the treetops and the ground towards the end of my flight. People I talk to about it seem to sit firmly in one of two camps. There are those who immediately react “I’d love to do that!” and those that say “I’d never do that!” However, if anyone reading this falls in between these two as I did, I couldn’t recommend it to you more. It’s really not scary once you are up there. It’s exciting. Thrilling. Exhilarating. And leaves you with a wonderful sense of achievement that’s hard to bet. I walked back to the Eden Project grinning from ear to ear, feeling very lucky that there had been a break in the weather. The zip wire, however, wasn’t going to be the only adrenaline rush of the weekend.

Just as I got back undercover at the Eden Project the heavens opened once again. I was so lucky that the lull in the wind speed matched the time of my zip wire booking. Gales lashed the south of England climaxing the next day as I was travelling home by train.

I was sitting quietly by the train window when the world outside seemingly exploded! The train shuddered to a halt as branches flew in all directions. A forty-foot tree with a huge girth had fallen on the train. The noise was incredible. Luckily, all the trains along the south coast were under instructions to drive a lot slower than normal otherwise we would have completely derailed I was told. Thank goodness, no one was seriously hurt but we were stuck there for hours with no food, water or working toilets. I couldn’t understand how they could get a film crew there but not manage to get us some bottles of water! Eventually, firemen erected a platform by one of the carriages with a ladder down to the ground and we were all soon off the train.

We were picked up by coach and dumped at the nearest railway station.

The train network across the south of England floundered in total chaos. I soon lost count of the number of times I had to change trains. Despite having set out early in the morning, I only just made it home on the very last train. Partway back a friend texted me that they’d seen me on the 6 o’clock national news being rescued by a fireman from our stranded train. And some of my followers spotted me too with the folds of my flowing skirt getting wrapped around a fireman’s head as I climbed down the ladder – a moment Bridget Jones would have been proud of!

From the singing in the rainforest biome to sleeping in a container crate, and from lying over the Eden Project to the train crash, it was certainly a weekend in Cornwall to remember.