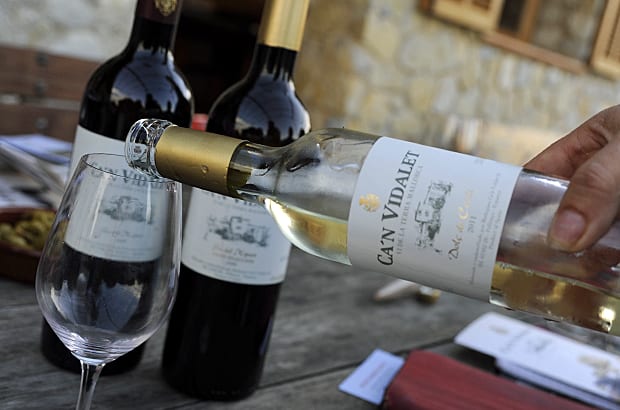 As the sun was sinking low in the sky and a golden light spread across the vines, Monica welcomed us to the Ca’n Vidalet winery in northern Mallorca, Spain.

They had just finished harvesting this year’s grapes that very day and walking around the vineyard in the warm evening air was delightful, especially as we knew we were about to taste some of their award-winning wines. 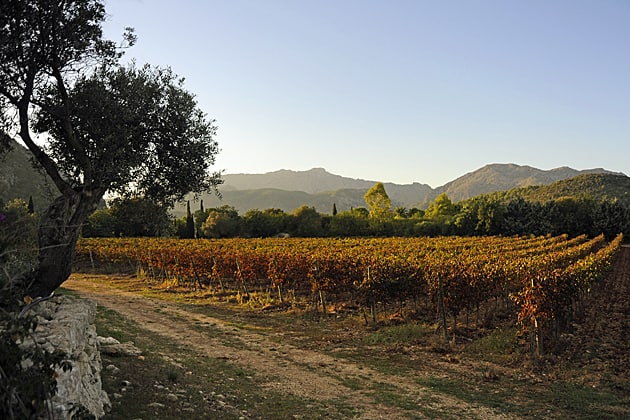 Most wine production in Spain is in the north, Rioja being a firm favourite of mine, but some great wines are produced throughout the country including on the Balearic Islands. Wine making was introduced to the island by the Romans and production became prolific until a plague of phylloxera swept across Europe in the late 19th century, decimating wine production. It was not until the 1990’s that investment and determination saw the resurrection of the wine industry in Mallorca.

In any of the island’s supermarkets you’ll now find a choice of not only Spanish and International wines but a variety of Mallorcan wines as well, mainly from the ‘Denominació d’Origen’ of Binissalem, in the central plains of the island, and of Pla í Llevant, on the eastern coast but wine growing is certainly not exclusive to these regions. The Tramuntana Mountains create a microclimate in the north of the island, where I was visiting, making the wines distinctive to this area. Whilst there is no ‘DO’ classification here, the wines are quality controlled by the ‘Mallorca Regional Wine’ designation.

In nearly every village in Mallorca you’ll find one or two bodegas, which you’ll recognise by a branch or sprig of greenery over the entrance. Here you’ll find delicious local wines which you can taste straight from the barrel and at great price too.

You might also enjoy: Top 16 things to see & do, eat & drink in Mallorca

Not far from Pollensa in the north of the island you’ll find the winery of Ca’n Vidalet and with up to 11 hours of sunshine and a mild climate, this is a fantastic area for wines, as well as tourists.

The land had been a vineyard many years ago but following the phylloxera plague, the vines were replaced with first almond and then olive trees but in 1995  it was restored to a vineyard. Chardonnay, Sauvignon Blanc, Muscadet and the Mallorcan grape, Prensal Blanc, as well as Merlot are among the grapes grown here on the chalky limestone soil (perfect for water retention). 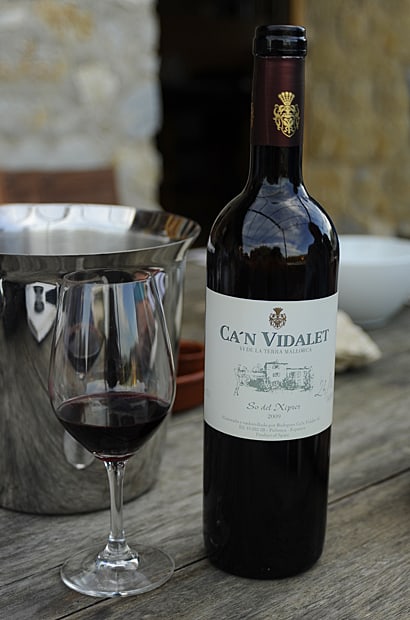 Only using selected grapes that have been hand-picked, the wine is gently fermented in stainless steel vats at controlled temperatures and all their red wines are then matured in barrels of French Oak for between 12 to 18 months. 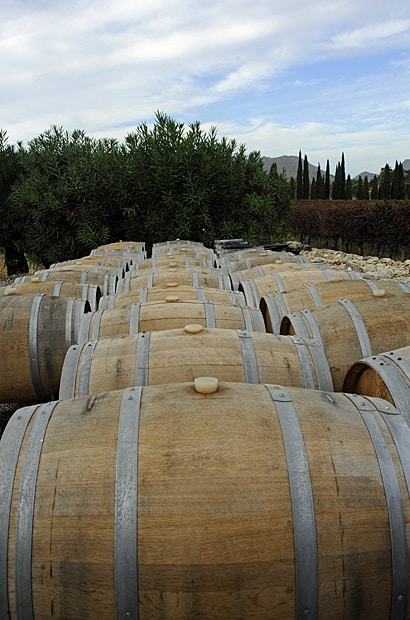 For their red wine, So del Xiprer – Gran Selección, only their finest grapes from their oldest vineyards are selected. Each large vat of grapes is then trodden for an hour to an hour and a half, every day for ten days (rather than mechanically pressed) to produce their finest red wine. 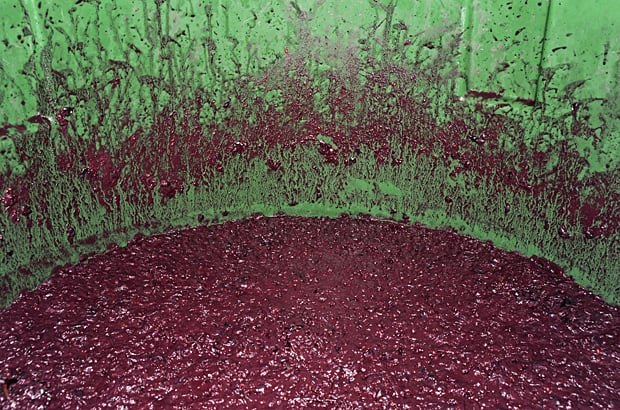 Ca’n Vidalet are now branching out from just producing wine and their 11 Dry Gin is the first gin to be produced in Mallorca, the number 11 representing the number of Mediterranean plants from which the gin is distilled. Another Mallorcan first is their Marc de Cecili, an excellent, crystal clear brandy. 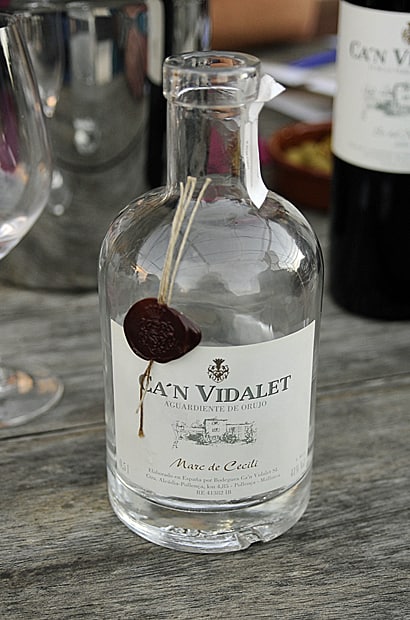 Sitting around a large wooden table as the sun went down, sampling one delicious wine after another, while nibbling on tasty morsels of olives, charcuterie and cheeses, I think we could easily have chatted there all night! Wine tastings are easily arranged and cost from €12 and I’d thoroughly recommend them as all the wines and spirits we tried were excellent. Visit Ca’n Vidalet‘s website for more details.

It was in a restaurant in Pollensa, Café Plaça, where we were having a fantastic meal of one delicious dish after another, that I had my first taste of Mallorcan beer. 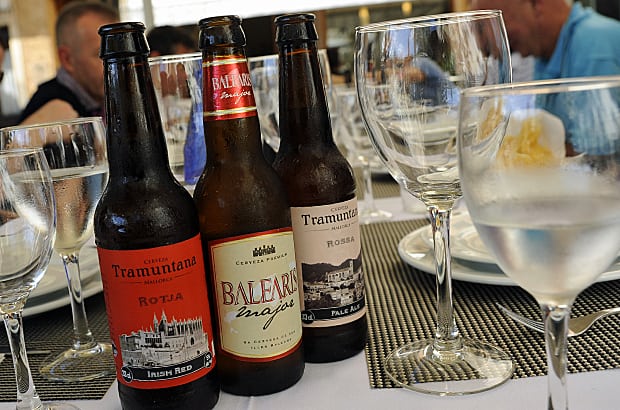 Cerveza Tramuntana, named after the mountain range in the north of the island, is bassed in Selva. Their Rossa is a light golden mild-flavoured ale, 4.8% abv and with a flavour of Cascade hops. It is best served very cold. We also tried their Rotja, 5% abv, which had a redder hue and was very refreshing. It’s main characteristic is the flavour of caramel and roasted malts. They also make Negra which is stronger at 6% abv – a dark beer, that I’m told has coffee and chocolate notes. 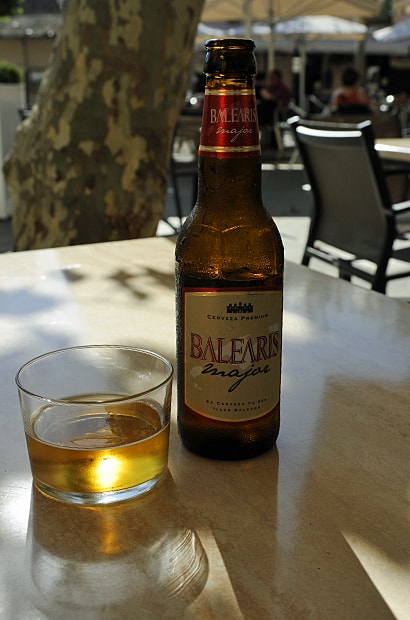 The third beer we tried was from another brewery, Balearis, a pale larger, 5.2% abv, called Balearis Major, which had a mild slightly bitter taste. It is currently brewed in Germany but they hope to move to the Balearic islands soon.

All three beers we tried get a thumbs up from me.

Palo is a popular aperitif, once used to fight off malaria. It is made with an infusion of cinchona bark and gentian root, both of which apparently have anti-malarial properties. Just one reason I need to return to Mallorca is to try this as I managed to miss it this time round. 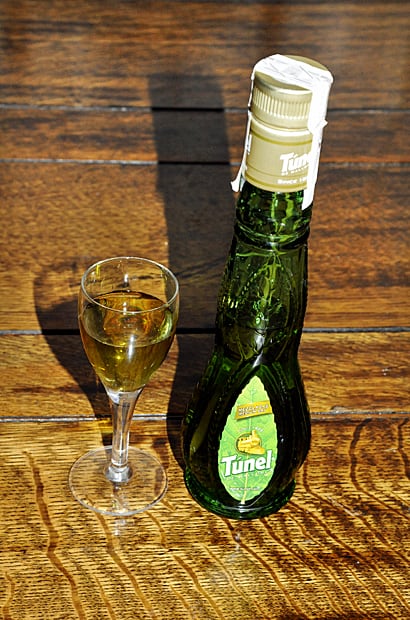 Herbes or Túnel de Mallorca is a traditional local liquer, often given, free of charge, at the end of a meal in many Mallorcan restaurants. This digestif is made from many different herbs, rosemary, chamomile, mint, fennel and marjoram, in anise. Locals swear by it for warding off colds, flu, sore throats and many other ills. Those labelled seques are dry, docles sweet and mezclades, which is the one I tried, is medium dry. Its distinctive taste of herbs, with mint being the most prominent, and the anise really hits the spot.  I brought a bottle back with me so will put that to the test this winter, although I’m not sure it will last that long as it is rather moorish!

And if you want to know more about what you should eat with all these delicious drinks check out my post – Eating Mallorca.

Read all my articles from across Spain and her many lovely islands.

With special thanks to the Ca’n Vidalet, Cafè Plaça, Hotel Illa d’Or, Classic Collection Holidays and Enjoy Pollensa. As always, all thoughts expressed are my own, honest opinions.

More photos from my visit to Mallorca can be found on Flickr.

Lamb, slowly roasted in an ancient stone oven until it falls off the bone and sobrasada, a spicy spreadable sausage,...