Where to stay? A guide to the islands and hotels of Cape Verde 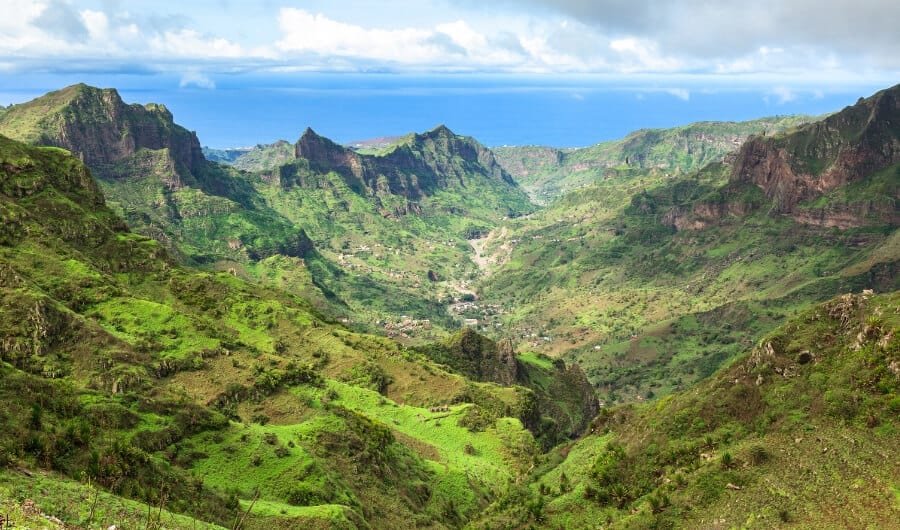 Some 350 miles west of Senegal, lies a laid-back archipelago of tropical islands hidden in the Atlantic Ocean off the coast of West Africa. Each of the islands of Cape Verde is unique. Some have lush green valleys tucked between dramatic mountain ranges, while others are flat and barren with endless sandy beaches lapped by the bluest of crystal clear water. Up until relatively recently they were little known but with new airports and improving infrastructure, the tourist industry is growing fast, possibly too fast. Here’s my guide to each of the islands and all my favourite places to stay in Cape Verde. 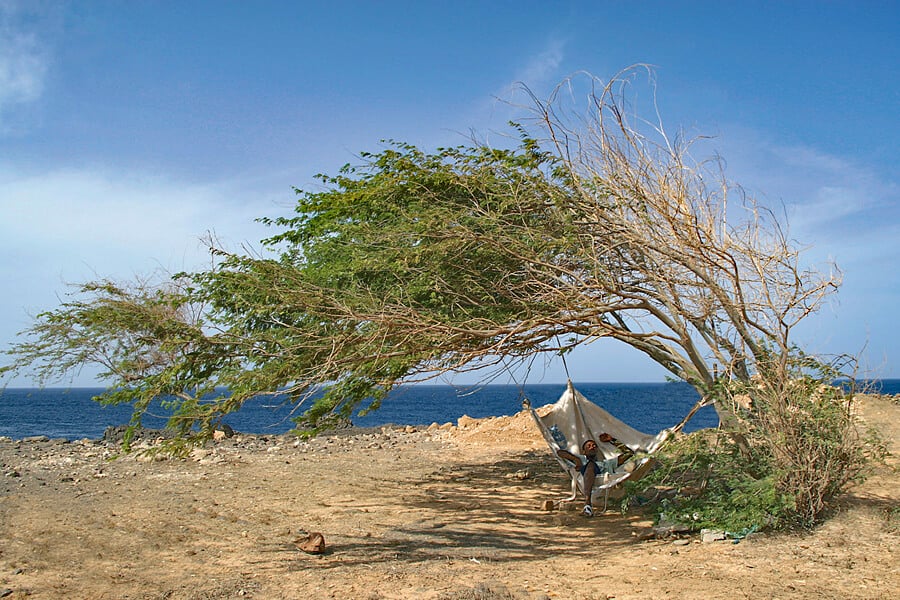 The people and culture on the islands of Cape Verde are an eclectic mix of African, Portuguese (the former colonists) and Brazilian. Everyone I met made me very welcome, although I was rather bemused by being hissed at by some men as I explored the town at Mindelo one afternoon. The next day it came up in conversation with my hotel’s receptionist. She smiled and explained “It’s just our way of catching someone’s attention. It isn’t rude at all.” So if you ever take a stroll around Cape Verde and you are hissed at, just turn around and smile politely, they’re just saying hello.

The islands | Best places to stay in Cape Verde

Each of the twelve islands is unique. Some are barren and flat, with the most amazing endless sand dune beaches that I have ever seen in the world, while others are mountainous, lush and green and popular with hikers and nature lovers. Ilhéu Raso (shallow island) and Ilhéu Branco (white island) are uninhabited but here’s an overview of the other ten islands that make up the archipelago of Cape Verde, a mini guide to the best places to stay in Cape Verde.

This is the most northerly island. It’s mountainous and green with spectacular ravines and pretty, little villages clinging to the hillsides. There are just a few hotels but it is also possible to visit for the day from neighbouring São Vincent.

Where to stay on Santo Antão

While I’ve not stayed on Santo Antão myself, my choice of hotel would be Pedracin Village high in the mountains or Santantao Art Resort, if you’d prefer to be by the beach.

Check out what people are saying about hotels in Santo Antão on TripAdivsor.

Considered the cultural centre of Cape Verde, the island’s capital Mindelo, in particular, is known for its music and it’s the home of Cesária Évora, the ‘Barefoot Diva’, Cape’s Verde most famous singer. She is also known as the ‘Queen of Morna’, the traditional music of the islands in which the Saudade is a recurring theme – a longing for someone or somewhere far away or lost forever. I only spent one day here but I’d love to go back to discover more and check out some late night music bars.

Where to stay on São Vicente

While I didn’t stay at this particular hotel, when I visited this island, Kira’s Boutique Hotel, in the centre of Mindelo, would be my choice for a return visit.

See what people are saying about hotels in São Vicente on TripAdvisor. 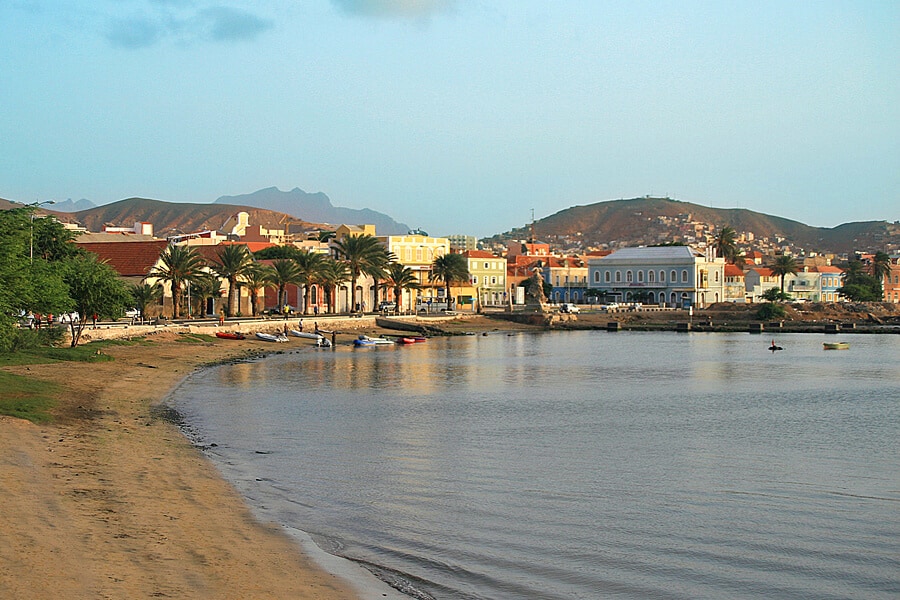 You can see more of my photos from Mindelo in my post about Saõ Vicente.

Another mountains island, São Nicolau is quiet and unspoilt, with little tourism I’m told. Some of the beaches here are said to have healing powers and so don’t be surprised to find a few locals buried in the sand.

Where to stay on São Nicolau

The colourful Pensão Bela Sombra in the heart of Ribeira Brava would be my choice of accommodation on São Nicolau.

Read what people are saying about hotels in São Nicolau on TripAdvisor.

Most international flights land here so it’s no surprise that there are more hotels on this island than anywhere else. The majority of these are in Santa Maria where you’ll find a reasonable choice of restaurants and bars, as well as a few drunken Brits, plus some small shops and a craft market but not much else. 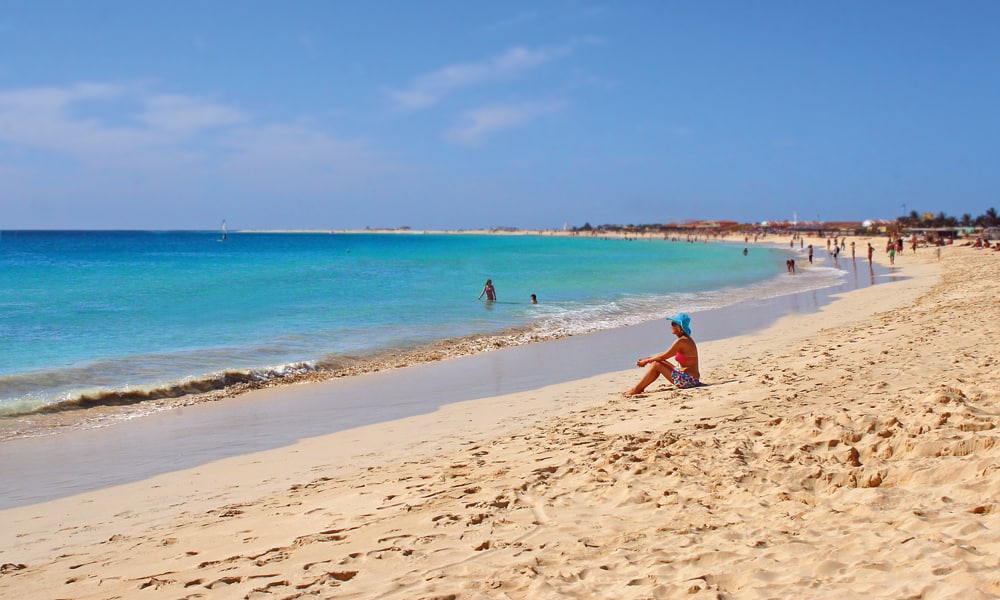 Sal is flat and sparse with little to do here other than soak up the sun, scuba dive or enjoy the wind-driven water sports that the island is renowned for. The highlight of the island is without a doubt the white sandy, beaches which are impressive and stretch for miles and miles, although it can be quite windy. If watersports are your raison d’être, it’s perfect.

Where to stay in Sal

Santa Maria has some beautiful hotels and is one of my favourite places to stay in Cape Verde. My preferred hotels are Odjo d’Agua (pictured below) and Hotel Morabeza. I spent a fabulous holiday in the former and visited the latter a number of times, including for a fabulous dinner. Both are right on the beach and are excellent family run hotels. Read my review of Odjo d’Agua. 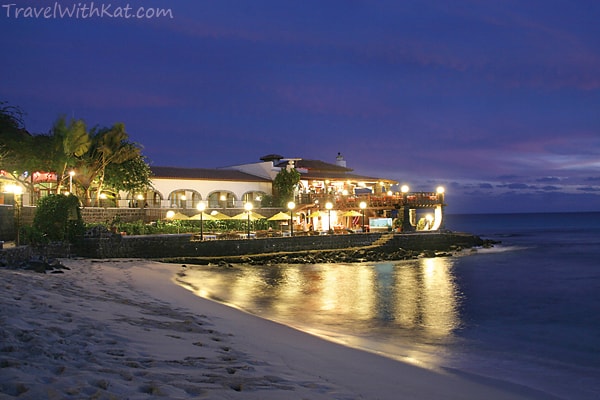 Check out what people are saying about hotels in Sal on TripAdvisor.

When I first saw the beaches here I remember my heart skipped a beat at the sight before me; endless sand dunes to my left and to my right, edging the bluest of seas. I ran down the vast expense of sand to the clear, cool water and with my feet in the shallows marvelled at the view. I couldn’t stay on the beach for long though, as I was there to photograph the hotels, but I’ll never forget that moment.

Despite a few large all-inclusive hotels and some smaller independent ones lining the beaches, there are still miles and miles of unspoilt coastline here. Just as well as it’s an important nesting ground for loggerhead turtles. More large hotels are planned, however, so I do hope great care is taken to protect the turtles and the natural beauty of the island’s coast.

Windsurfing, whale-watching, quad biking and deep-sea fishing can all be enjoyed here but there’s little in the way of nightlife and just a few local restaurants.

It was in such a restaurant, over a delicious lunch of I’m not quite sure what (there was only one dish on the menu that day and no translation) that I met an interesting young man who spoke excellent English. I was impressed to find out he had learnt it by watching American films with subtitles. I was so interested in the conversation I didn’t think to ask what I was eating. It went down a treat though.

I ran down the vast expense of sand to the clear, cool water and with my feet in the shallows marvelled at the view. My first impressions of the never-ending dunes of Boa Vista, lapped by the bluest of seas, will stay with me forever. 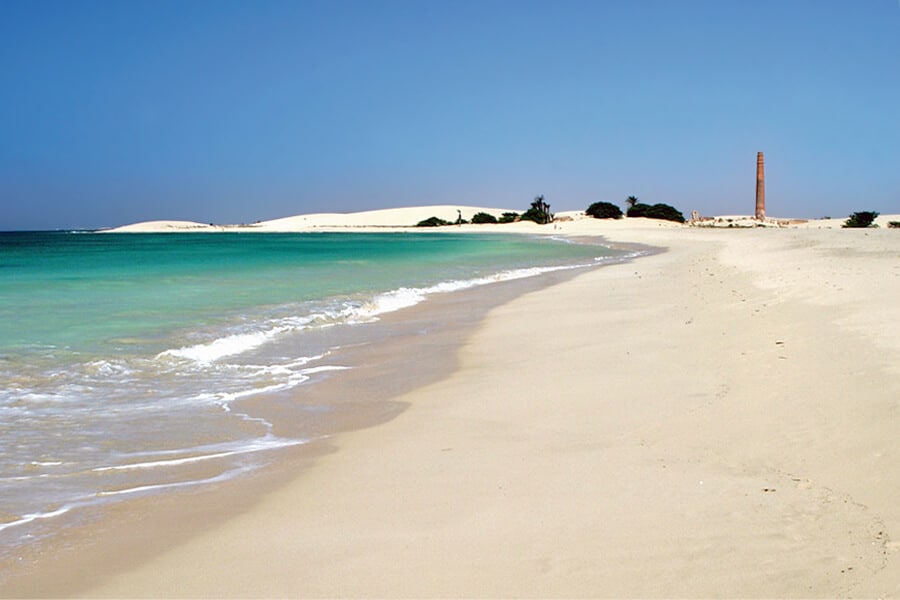 Where to stay on Boa Vista

My favourite hotel on Boa Vista is Spinguera Eco Lodge, although some might find it rather remote. I also really loved Marine Club Boa Vista with its spectacular pier out to sea (pictured below) – the perfect spot for cocktails at sunset. 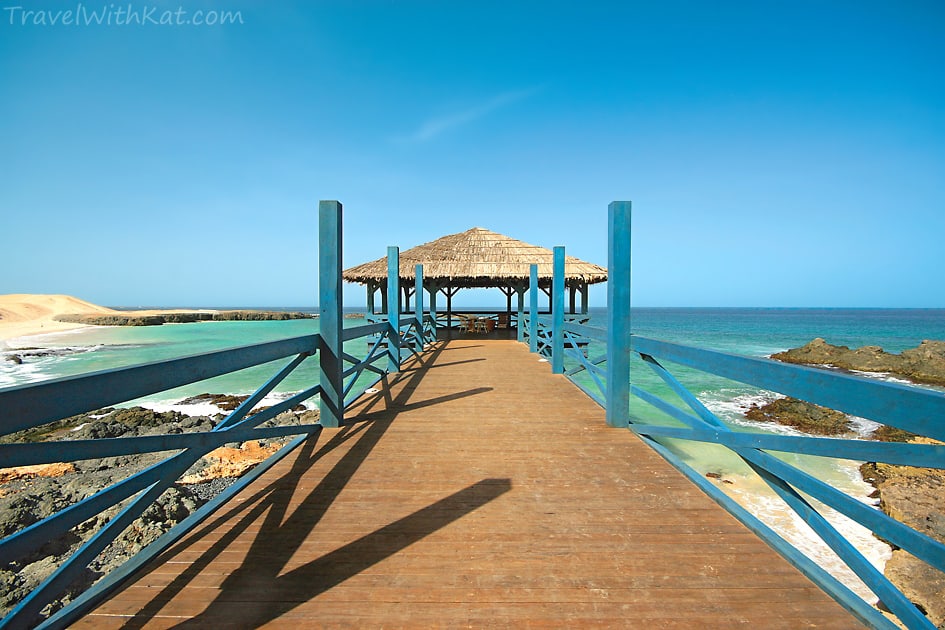 Read what people are saying about hotels in Boa Vista on TripAdvisor.

Maio | For getting off the beaten path

Like Boa Vista and Sal, Maio is a flat island with spectacular beaches but it remains almost completely untouched by tourism.

Where to stay on Maio

My choice of accommodation on Maio would be Kaza Tropikal, a basic, great value option with excellent reviews that’s reputedly perfect for solo travellers.

See what people are saying about hotels in Maio on TripAdvisor.

This is the largest of the islands and its capital of Praia, has a rich history and culture plus a lively nightlife scene. The landscape is varied with green valleys, volcanic mountains, barren regions and beautiful beaches. The old capital of Cidade Velha is a UNESCO world heritage site. Santiago is said to be the most African of the islands.

Where to stay on Santiago

Pestana Tropico Hotel would be my choice on the island of Santiago. It’s in a great location by the beach in the centre of Praia and I’ve heard good things from fellow travel bloggers who have stayed here including Nellie from Wild Junket.

Check out what people are saying about hotels in Santiago on TripAdvisor.

Fogo | For coffee and wine aficionados

A large volcano rising up out of the sea, Fogo, is known for its wines and coffee and its nickname the ‘island of fire’. The grapevines and coffee beans are grown on the fertile land inside the crater of the still active volcano. Reminiscent of a lunar landscape much of the island, including the beaches, is covered in black sand. The capital, São Filipe, is a picturesque town of cobbled streets and pastel-coloured buildings.

Where to stay in Fogo

The small family-run hotel, The Colonial Guest House, would be my accommodation choice on Fogo. It looks charming and has a great reputation.

Check out what people are saying about hotels in Fogo on TripAdvisor.

Brava | For hikers and nature lovers

Lastly, the little island of Brava, the most southerly of the archipelago, is known as the ‘island of flowers’. It’s mountainous and spectacular with dramatic lava cliffs plunging into the sea. It is thought to have once been part of Fogo.

Where to stay on Brava

Djabraba’s Eco-Lodge, has an excellent reputation. It’s basic but highly thought of and in a great location.

Check out what people are saying about hotels in Brava on TripAdvisor. 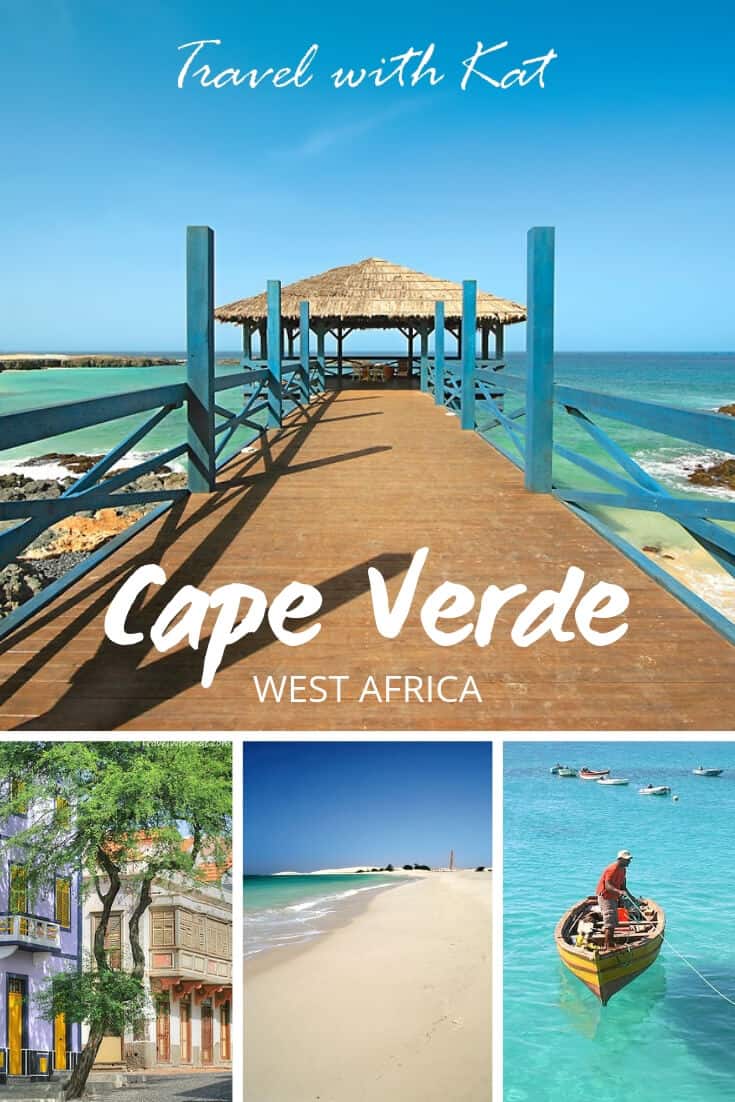 The variety of the islands of Cape Verde really is spectacular and fascinates me. While all the islands are volcanic in origin (as are the Canary Islands which lie a little further north) only Fogo has a still active volcano. I would dearly love to go back one day and explore a few more for myself, ideally island hopping. It’s certainly the way to make the most of any visit to the islands of Cape Verde and something I would have done more of if funds had permitted.

I cherish the memories of this very special cluster of islands, that for many years remained lost in the Atlantic Ocean. Although the tourist industry is much needed by the islanders, I’m still a little sad that they have now been discovered.

Join me as I explore São Vicente and its capital Mindelo, the cultural heart of the islands of Cape Verde.