Best places to visit in October in the UK and beyond 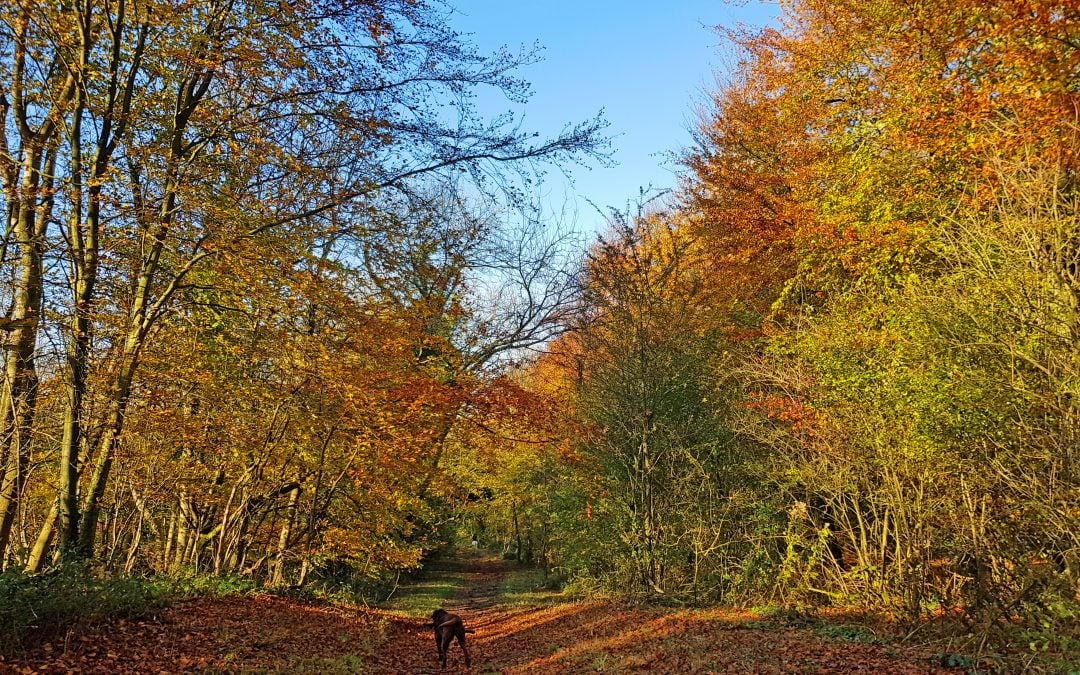 One of my favourite times of year for travel is October, as the days grow shorter and the weather becomes cooler. Both in the UK and throughout the rest of Europe there’s less demand for holiday packages and hotel rooms, so prices drop and popular locations are less crowded than in the summer months. But where are the best places to visit in October in the UK and beyond. Here are my top 10 choices for the best October holidays in the UK, Europe and beyond and my tips for getting the most out of your travels.

This post is brought to you in association with Rohan, the outdoor and travel clothing specialist. Some links in this article are affiliate links.

Best places to visit in the UK in October

October is a great time of year for wildlife watching in the UK. Our hedgerows provide a feast of berries, nuts and seeds and many animals tuck in, building up fat reserves before they hibernate. For keen photographers like me, there’s a softer golden light and often glorious sunsets, not to mention the wonderful colours of autumn foliage. Here are a few ideas for the best October short breaks and days out in the UK.

October is the time to see one of the UK’s greatest wildlife spectacles; the deer rutting in our woodlands and country estates, as the stags fight to prove their dominance. The New Forest in Hampshire is home to all six species of deer found in the UK, but there are a great many more excellent locations throughout the country including Eastern Moors in the Peak District, Margam Park in Glamorgan, Galloway Forest Park in Dumfries and Galloway, and Knepp in West Sussex. 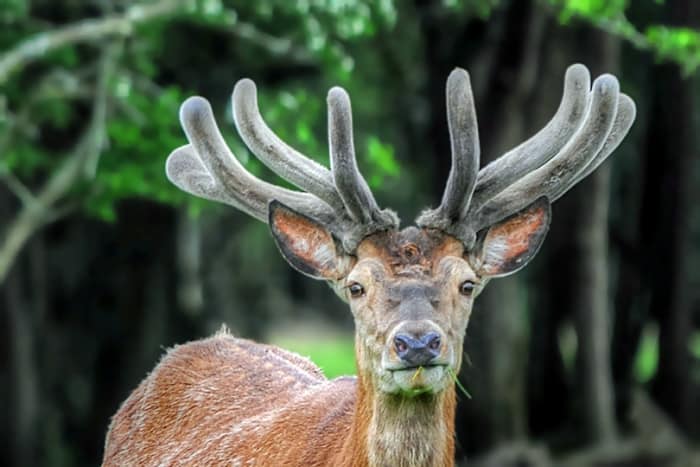 On Brownsea Island, which makes a great day trip from Poole in Dorset, the red squirrels are easier to spot as they come down from the trees in search of beach nuts and sweet chestnuts, burying many to save for the winter months ahead. No longer found in southern and central England apart from on Brownsea Island and the Isle of Wight, they’re an absolute joy to watch scurrying along the ground and over fallen trees. Red squirrels can also still be found in parts of Northern England, Northern Ireland, Wales and Scotland, but for us southerners we must head for the islands to see them. 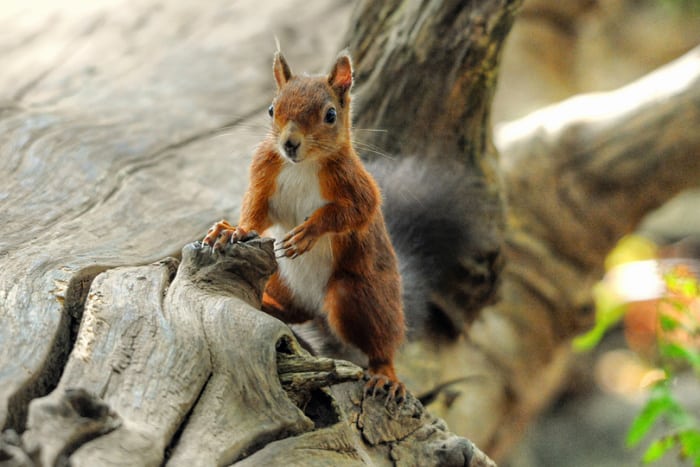 Loch Lomond, the Lake District, Wye Valley, the New Forest, there are so many wonderful woodlands to explore in the UK and enjoy the glorious reds, yellows and oranges of our fall foliage. The show varies from year to year, depending on the weather, so hope for no strong winds or heavy rain, which can cause the leaves to drop before they develop their full autumn colours. Join one of my guided walks in October for some lovely views of the forests of the South Downs National Park. 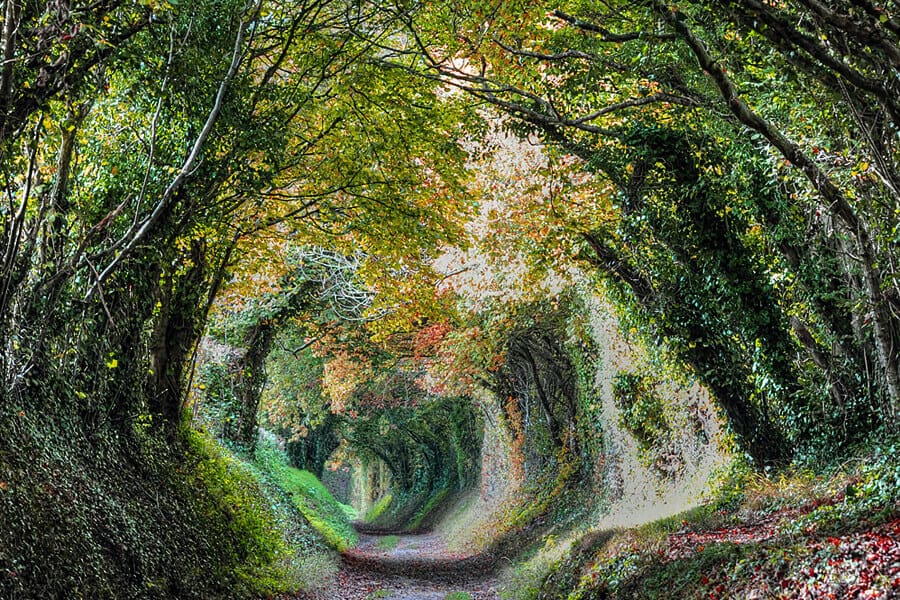 Equally fascinating are the autumn bird migrations, which are easily observed at the many RSPB reserves and Wildfowl and Wetlands Trust centres found across the country. Summer visitors leave, and winter migrants return, coming from Iceland, Scandinavia, Eastern Europe and Siberia.

One of my favourite spots for bird watching at this time of year is Pagham Harbour, an RSPB Nature Reserve in West Sussex which you can read about in my post Autumn Walks around Pagham Harbour. 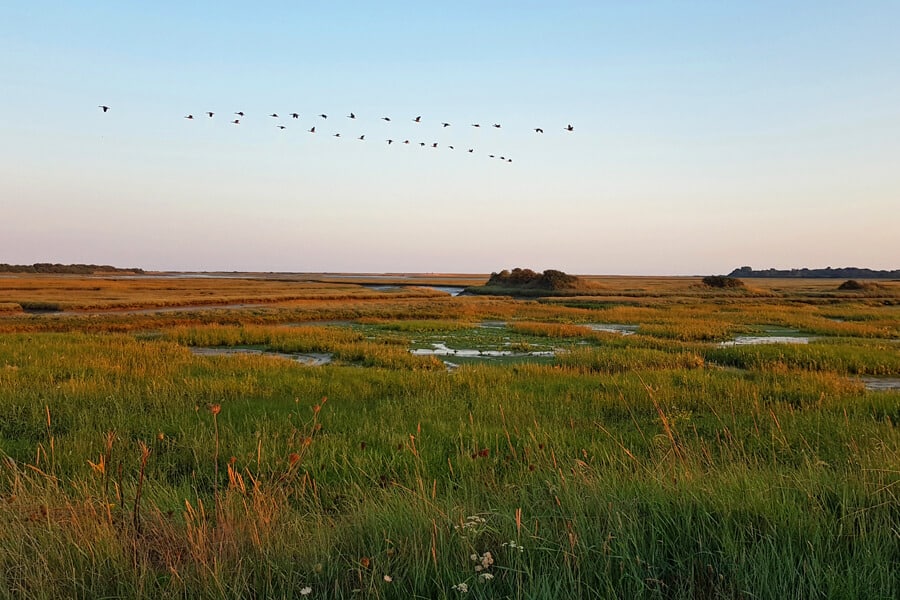 In many parts of the world the weather in October can vary greatly from one year to another and even from one day to the next. You may experience warm, sunny days as well as wet, chilly ones. Layering your clothes is ideal for this and if there is any chance of rain make sure you have a good set of waterproofs, including waterproof footwear. Nothing puts a dampener on your holiday more than wet, cold feet. If you have the right gear with you, you can get out and explore your destination whatever the weather.

My Ascent Jacket from Rohan is perfect for keeping me warm and dry whatever the English weather throws at me in October. It’s completely waterproof, highly wind-resistant and highly breathable and has all the usual Rohan features of being hard-wearing, easy to wash, fast drying and (possibly my favourite of all) crease-resistant. I like to team it with this hooded top and a pair of waterproof Dry Roamers or Ambler Trousers, depending on the weather forecast. 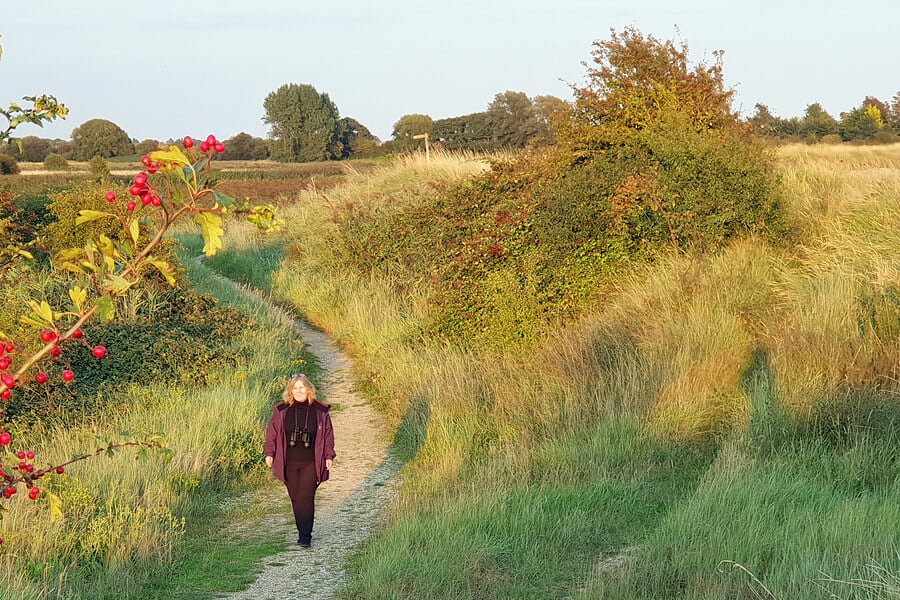 Where to travel in October in Europe

In southern Europe you’ll not only find cheaper prices and fewer crowds than in the summer months, but the temperature is more comfortable. It’s still lovely and warm, as is the sea for a swim, but it’s a pleasanter temperature if you like keeping active. Here are my top picks for October holidays in Europe.

Santorini is popular for good reason. It’s stunning! I visited in October a few years ago and had a fabulous week. It was hot enough for a bit of sunbathing and a dip in the sea, but we spent most of the time visiting different villages and walking in the countryside. In the summer heat I think the latter would have been hard going. 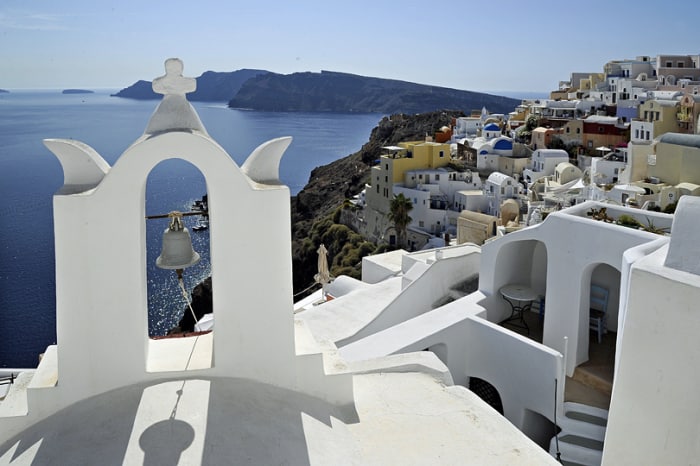 Just like Santorini, Rome in the height of summer is simply too hot and too busy. October is a much better month for city breaks in southern Europe, with average highs in Rome still in the lower twenties and not too much rain. Take romantic walks along the river, sip coffee in an elegant square while people-watching and explore the layers of history that are all around you in Rome. 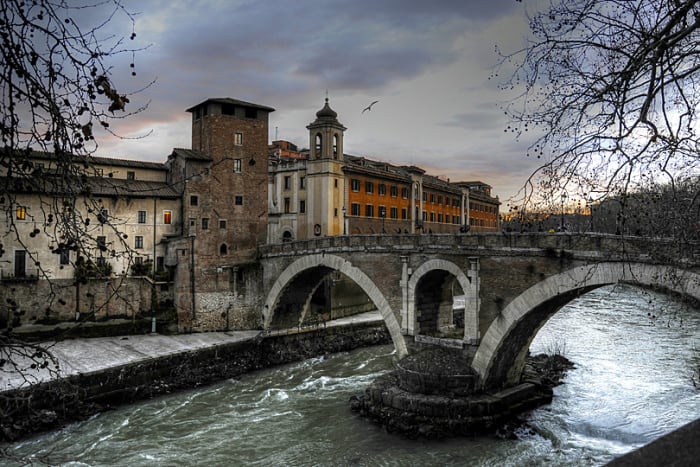 The weather is pretty good all year round in Tenerife, but from July to September it’s more suited to a beach holiday. In the winter it’s warm, but not hot enough for swimming. If you prefer an active holiday with a bit of beach time, which is my perfect combination, October is the ideal month to visit and is the perfect time to explore the trails of Teide National Park or the Masca Gorge. And again, outside of school holidays, it’s cheaper too. 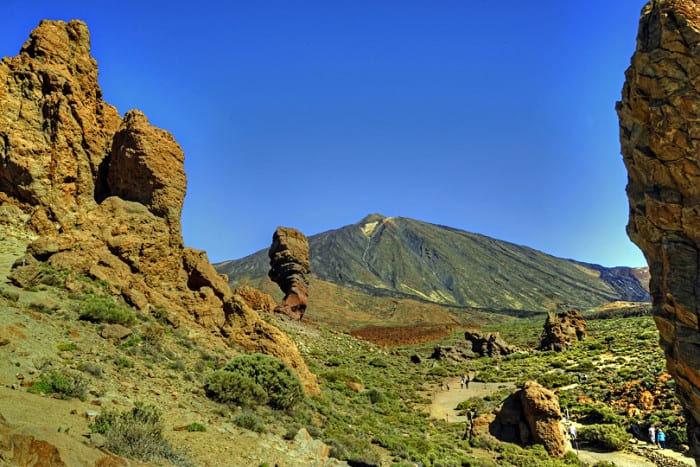 The Oktoberfest folk festival is celebrated across Germany with eating, dancing and beer drinking, but it all started back in October 1811 in Munich. These days it starts in September and ends in early October and is celebrated throughout many European countries, but for the authentic experience head to Munich in the first week of October, the month from which the festival takes its name.

While temperatures in Europe will certainly be cooler than the summer months, sunrays can still be strong, especially in southern Europe. Make sure you take sun cream, a sun hat and sunglasses — it’s not just your skin that is sensitive to the Sun, your eyes are too.

Rohan’s Elite Jacket is perfect for travelling to southern Europe in October. While you’ll probably enjoy warm sunny days, you may still get some rain. The Elite jacket is extremely light and packs up small, so is easy to carry with you just in case. It doesn’t compromise on performance, however, and is just as waterproof, wind resistant, breathable, high wicking and hard wearing as the Ascent Jacket.

Where to travel long-haul in October

Travelling outside of school holidays will save you even more if you are heading for a long-haul destination. Here are my two top picks of October holidays outside of Europe.

I visited Japan for the first time in November last year. I had always thought the spring for the cherry blossoms would be the best time to visit. Having seen Japan in its autumnal finery, I’ve changed my mind. We missed the height of the fall foliage colours, but even so, many of the trees still had leaves on them and the russet colours looked glorious set against clear blue skies. In October, the best part of Japan to visit for autumn colours is Hokkaido in the north, with the best fall colours then moving southwards as the days grow shorter heading into winter. 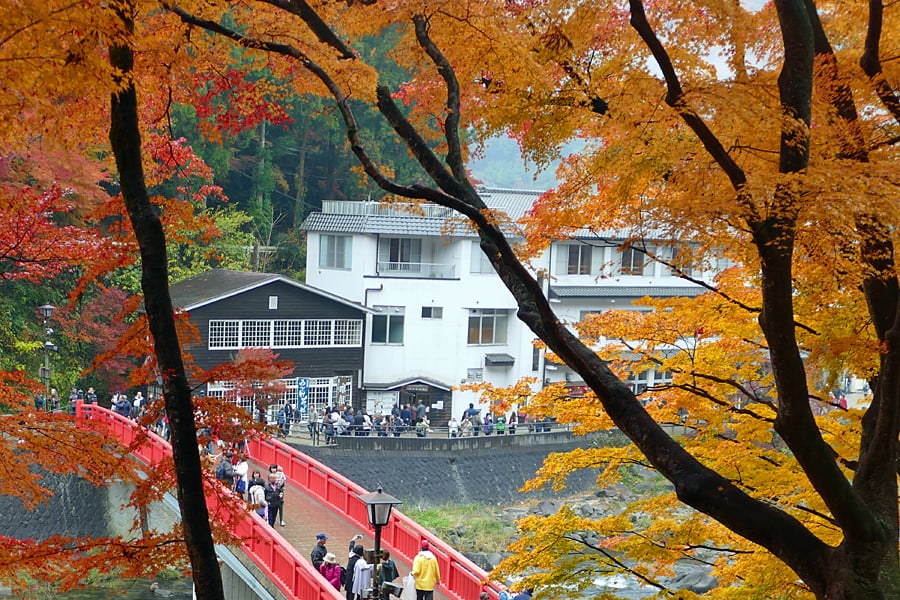 I’ve visited Canada many times now but always in either early or late Spring. I’m planning my next visit for the autumn, to see the magnificent fall foliage that is said to give New England a run for its money. Our plan is to take the train through the Agawa Canyon in the Algoma region of Ontario to go ‘leaf peeping’, as it is known in North America. 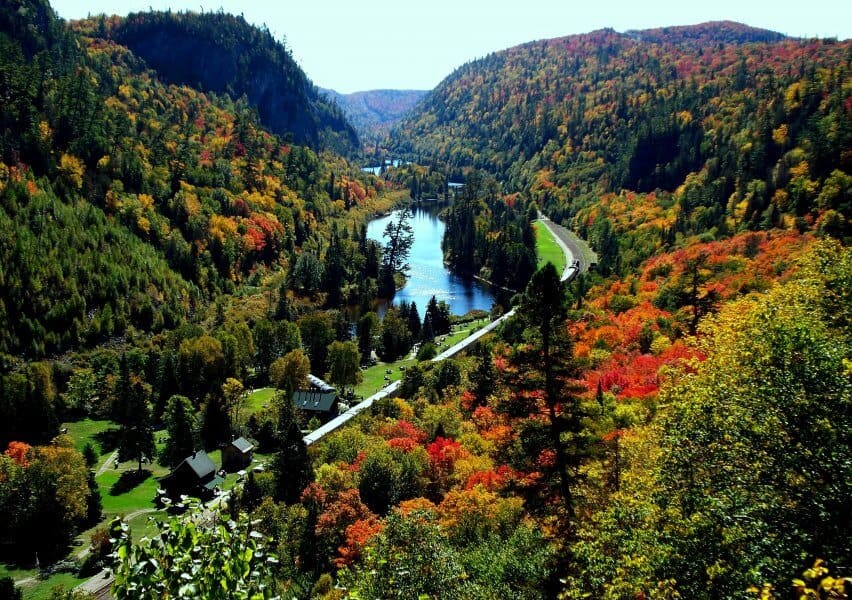 In Canada, Thanksgiving is celebrated in October, so while there are generally fewer crowds and cheaper prices throughout the month, during Thanksgiving weekend itself banks and shops will be closed and you can expect some crowds.

If you are travelling to cooler climes in October, Rohan’s Bergen Jacket is a great choice. It is longer than the majority of waterproof jackets that are available, offering more protection against the cold, wind and rain. The Bergen has all of Rohan’s signature features and looks great both in the city or in the countryside. 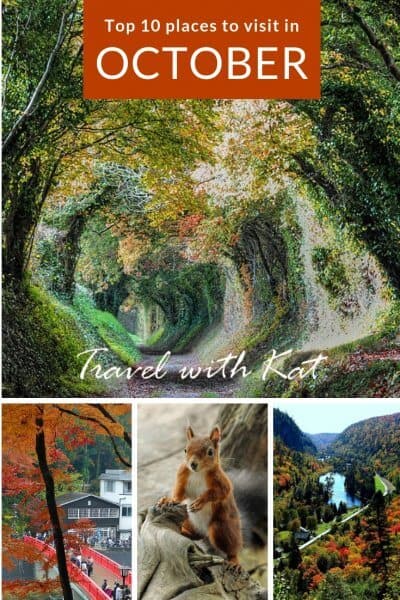