The rhythmic splashing of the oars through the still waters is such a soothing sound. Today, Passamaquoddy Bay is at rest, basking in the sunlight. With infinite blue skies above us, we paddle through the calm sea, passing rugged, pine-clad islands. At this moment there is no place I’d rather be, and it is with more than a little envy that I listen to Bruce talk about life on Deer Island.

Earlier that week I had arrived in Saint John, a flourishing Canadian city on the Bay of Fundy, and spent a wonderful few days exploring the city, which is bursting at the seams with great restaurants, breweries, art, and museums. I was rather envious of the beautiful parks within the city boundaries and would have liked to have spent more time there. Rockwood Park, for instance, would be a wonderful location for kayaking, but having never been to the east coast of Canada before I was eager to see more beyond the city and its suburbs.

Passamaquoddy Bay in the far south of New Brunswick, tucked up alongside Maine, USA, was the ideal choice. It is as rich in historic interest as it is in natural beauty, and I had a wonderful time exploring its communities, waterways, and islands, not to mention its edible delights.

My first day trip from Saint John started on Deer Island, a short drive and ferry crossing from the city. It is here, between May and October, that Bruce Smith runs Seascape Kayak Tours from his clapboard home on the water’s edge. It is the perfect spot for kayaking for all levels of experience and ability. After a bit of paddling around the sheltered harbour, we set off into the open waters of the Bay of Fundy. There really is nothing I find more relaxing or invigorating than kayaking while surrounded by so much natural beauty.

Today the weather is perfect. I feel the warmth of the sun on my face as we paddle along. When we reach Bean Island we head towards the shore and pull our kayaks onto the beach. With the sea providing a gentle rhythmic soundtrack as it laps the sand, we tuck into our picnic.

All too soon, we are back on Deer Island and I’m sorry to leave the idyllic scenery that Bruce enjoys every day from late spring until early autumn. The other half of the year he runs his kayaking tours in Costa Rica. Nope, I’m not the least bit envious. The heck I’m not!

Seascape Kayak Tours have built an excellent reputation for quality, safety, friendly service and an unflinching commitment to preserving the natural beauty of the environments in which it operates. In 2010, the company’s founder, Bruce Smith, was awarded the well-deserved New Brunswick Department of Environment’s Lifetime Achievement Award.

After our morning out on the water, we head to Ministers Island and the summer estate of American-born railroad builder Sir William Van Horne, the visionary behind Canada’s first transcontinental railroad, which was completed in half the anticipated time and for half the estimated costs. Not many projects can say that!

Our visit is timed to coincide with low tide, the only time the island is accessible by car, foot or bicycle via a 1km drive along the seafloor.

In Sir William’s day, the 500-acre island was almost entirely self-sufficient with an immense livestock barn and a creamery, not to mention the heated greenhouses where mushrooms, peach trees, and grapevines grew. On Ministers Island, Sir William entertained Canadian and American businessmen, railway barons, Japanese royalty and the international social elite. When not staying on Ministers Island Sir William and his family lived in Montreal but they still enjoyed the fresh milk, butter, fruits and vegetables sent by rail from the island each day in time for the following morning.

While building the Cuban railway in 1900 Sir William developed a taste for cigars. Towards the end of his life, his doctors ordered that he smoke no more than three a day. The very next day, a package was delivered to him in hospital containing two-foot long cigars which took four hours to smoke! A man of real determination.

A fascinating couple of hours pass as we explore the 50-room house, Covenhoven, as well as the circular bathhouse and tidal saltwater swimming pool. I was interested to learn that while much of the contents of the house had at one time been sold off, following Covenhoven’s renovation, many locals donated the original pieces of furniture and other items back to the estate — a sign of their affection for the island and its history no doubt.

While many come here to follow the scenic walking trails that offer fabulous views across the bay, it is well worth exploring the house itself, but either way, the tide dictates when it’s time to leave. We drive back across the seabed before it disappears beneath the waves.

And if you are wondering why it is called Ministers Island, in 1790 Reverend Samuel Andrews bought the island and built a modest stone house here, despite the inconvenient location that limited his access to his parishioners. Ever since it has been known as Ministers Island. Over a hundred years later in 1891, the Andrews family sold the island to Sir William Van Horne. 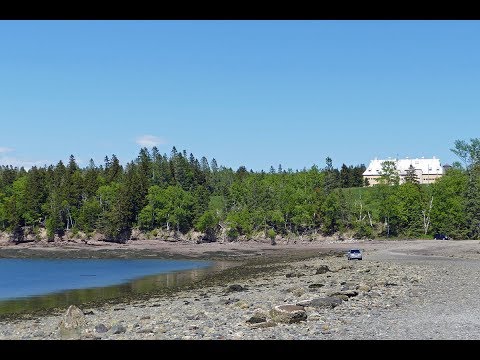 On the way back to Saint John we stop off for dinner at the Rossmount Inn on Route 127, just north of St Andrews. This charming 19th-century manor house beneath Chamcook Mountain on an 87-acre estate is a must for a special occasion.

We start with pre-dinner cocktails on the veranda as the early evening sunshine bathes everything in a golden light. Moving indoors to the elegant dining room, an exquisitely presented culinary feast follows including succulent ‘Bay of Fundy scallop ceviche with a celery, lime, cilantro, jalapeno and sweet potato silk’, a cooked-to-perfection ‘angus beef striploin with a celery root purée, spring vegetables and a Béarnaise sauce’, finished off with some Tomme le Champ Doré, a smooth melt-in-the-mouth New Brunswick cheese with a slightly nutty flavour, matched perfectly with a delicious home-baked fig and seed bread and a glass of full-bodied red wine from the well-stocked cellar.

Rossmount Inn’s chef, Chris Aerni, following extensive training in Switzerland, gained experience in many different culinary and managerial roles around the world. In 2001 he and his wife purchased the Rossmount Inn and quickly gained an exceptional reputation for producing quality food, showcasing local produce from nearby organic farmers and the local fisheries, as well as foraged wild foods such as mushrooms, kelp, cattails (bullrushes) and goose tongue greens. The Rossmount Inn’s kitchen is well known for being an excellent training ground for chefs and culinary students, and Chris has also become a much sought-after speaker at sustainable seafood events.

As we drive back to Saint John we stop to admire the spectacular sunset. The perfect end to an unforgettable day.

Plan your day out from Saint John

Saint John to Seascape Kayak Tours on Deer Island
The drive, including the ferry crossing, takes around 90 minutes. The ferry crossing is about 20 minutes and is free of charge. The ferries leave about every 30 minutes 16 hours a day (subject to weather conditions).

Visit Canada Keep Exploring to discover more about where to go and what to do in New Brunswick.

Disclosure: Thank you to Air Transat, Destination Canada, New Brunswick Tourism and Discover Saint John for sponsoring this visit to Canada. As always, I retain the right to write whatever I wish and will always give you my honest opinion.