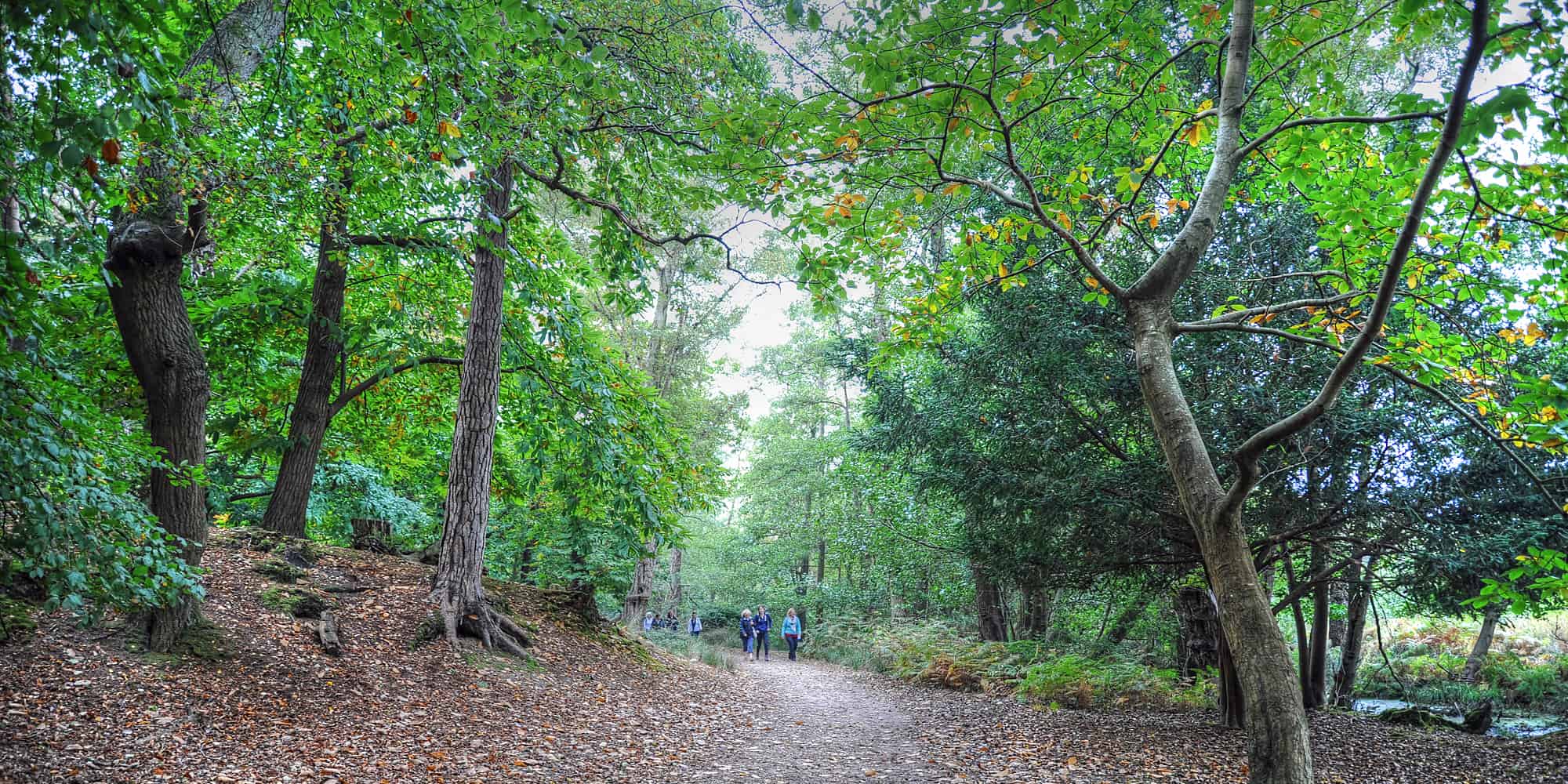 Sitting on a log in the dappled sunshine I catch a glimpse of rust dashing passed out the corner of my eye. The next moment he’s right there beside me, just a foot or so away. It’s such a joy to finally see one of the many red squirrels that Brownsea Island is famous for. He zips about inspecting my rucksack, then my camera bag, my jacket, ever hopeful that I might have some nuts squirreled away somewhere (pun intended). 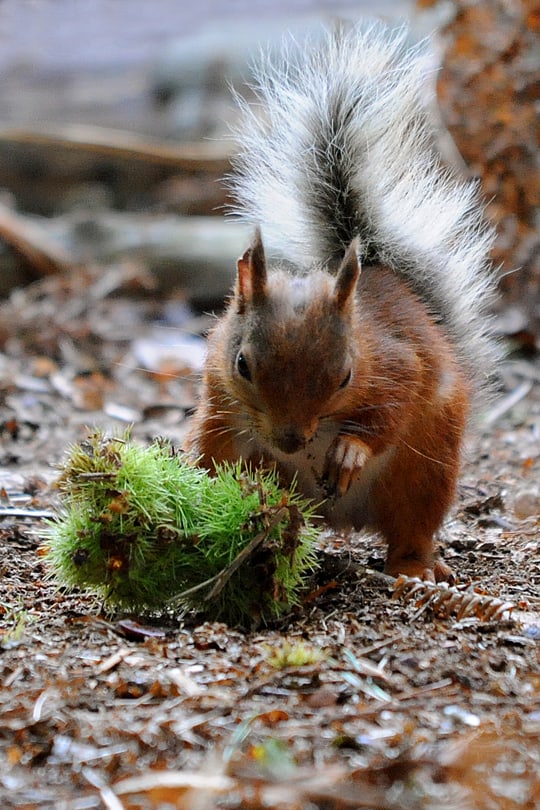 Why did the red squirrels disappear?

Do you remember the Tufty Club? I certainly do. Tufty was a jolly red squirrel that knew how to cross the road safely and as a little girl so did I because of Tufty. I can remember feeling so sad that red squirrels were dying out where I lived in the south of England and being replaced by the bigger grey squirrels. I’d look at every squirrel I ever saw hoping it would be a red one. But they never were.

The demise of the red squirrel (Eurasian red squirrel Sciurus vulgaris) I now know was down to loss of habitat and a pox virus that the larger grey squirrels (eastern grey squirrel, Sciurus carolinensis) carried. While it didn’t affect the greys, it was fatal to the reds and there is still no cure today. So now where I live and throughout most of England the red squirrels are no more. They are still found in the far North of England, Wales, Scotland and Ireland but they are nevertheless a threatened species.

The Red Squirrels on Brownsea Island

There are two islands, however, off the south coast of England where they are still found, the Isle of Wight and Brownsea Island. Thank goodness that the virus carrying grey squirrels have not as yet, some forty years later, found their way to these shores. I recently visited Brownsea and it was wonderful to finally see them zipping about the trees and forest floor.

Brownsea Island is owned by the National Trust and lies in the mouth of Poole Harbour in Dorset, one of the largest natural harbours in the world, second only to Sydney. The island may be only one and a half miles long but according to naturalist Bill Oddie it’s the best place for seeing wildlife in Dorset. As well as around 200 red squirrels there are also sika deer and at the lagoons managed by Dorset Wildlife Trust you’ll find flocks of waders such as avocets, black-tailed godwits and spoonbills from autumn to early spring. 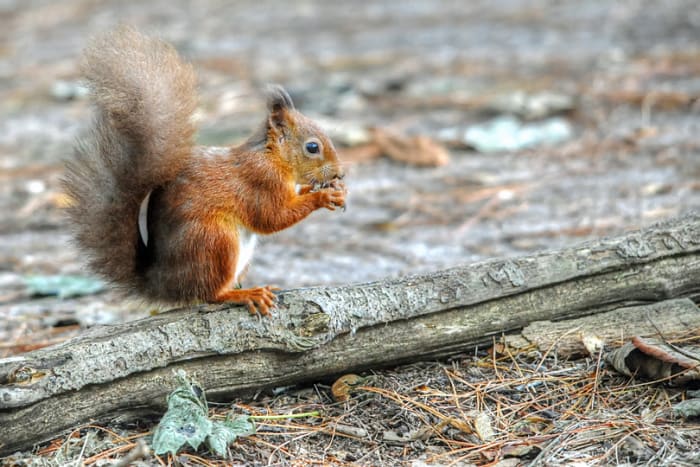 I’m here to see and photograph the red squirrels though so while I’d love to spend some time at one of the hides looking out over the lagoons I’m sticking to the woods where the squirrels are to be found. Most of the year they prefer to stay up in the higher branches of the trees but each autumn they come down to the forest floor in search of food. And what fun it is to watch them. They whizz around so fast it’s hard to catch them with my camera but perseverance pays off. And the tips I picked up from wildlife photographer David Plummer which came in so handy while watching bears in Canada are equally applicable here.

I wish I had more time to fully explore the island and would ideally like to return another day. A stay somewhere nearby in Dorset would be the ideal option.

When I first arrived on the island and I was just in time to join a squirrel walk. Our guide, Sue, gave us some fascinating insights into the island as well as the lifes of the squirrels here. Did you know squirrels can be right or left-handed? Neither did I. 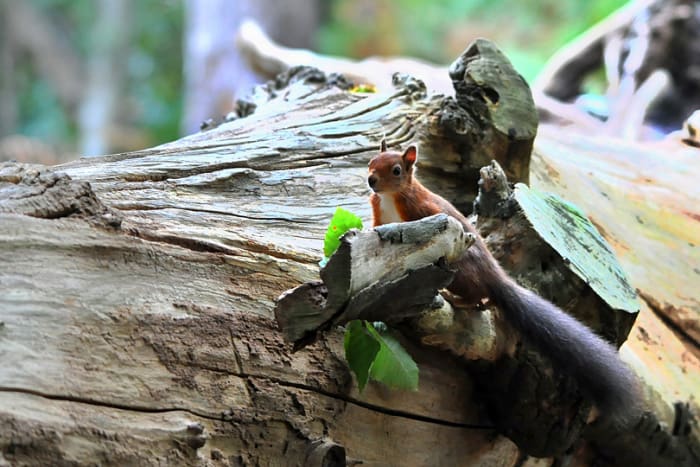 The squirrels vary in colour but are generally rust with cream underbellies. Their tails, as I saw for myself, can be rust, black or even cream. They sleep in drays which are much like pigeons’ nests in appearance. Females will build a number of drays and move with the kittens, carrying them by the scruff of the neck, just as a mother cat does, from dray to dray as each one in turn gets overrun by fleas. The males play no part in rearing the youngsters and once the kittens are weaned the females leave them to fend for themselves as these pretty little squirrels prefer a solitary life. Although if it gets really cold in winter related squirrels may curl up in a dray together to keep warm. One squirrel on Brownsea found another more novel way to stave off the winter chills. When a fluffy toy squirrel went missing from the gift shop it’s stuffing was later found lining a dray. They can be quite cheeky little things and have been seen carrying off numerous items including candles from the church. The toy’s stuffing makes sense but I can’t imagine what they would want with a candle.

What else is there on Brownsea Island?

Brownsea Island is a fascinating place and is well worth a visit, not only to see the squirrels but for its other wildlife, woodland walks, clifftop views and sandy beaches. You’ll also see peacocks. Lots of them.

The island’s restaurant serves excellent homemade meals using, wherever possible, local organic produce. There’s also a small castle on the island which is a holiday hotel (with a 4 year waiting list) for staff of the John Lewis Partnership, important benefactors of the island. Now That’s What I Call Holiday Pay is an interesting account of staying on the island back in 2003.

Significantly the island was the site of Baden Powels’ first ever scout camp, an experiment to see how boys from all walks of life would mix together learning scouting skills such as fire making. As you can probably guess it was a great success.

I was so engrossed in the squirrels that I only saw a small part of the island but I’m looking forward to returning one day to discover more.

You can see more of my squirrel pictures and other wildlife photographs taken here in the UK in my wildlife Facebook album.

Getting to Brownsea Island

Please note that Brownsea Island is open from March to the end of October each year and selected dates throughout the winter. More information can be found on their website, Brownsea Island.

Poole is easy to get to along the coastal railway line. To get there from London catch a train to Southampton Central where you can connect to a train to Poole. From the station it’s just a 15 minute walk to the quay where two kiosks sell tickets for the ferry to Brownsea Island for £10.50 for an adult return.

Alternatively the No: 50 bus from Bournemouth goes to Sandbanks where you can also catch the ferry to Brownsea Island.

National Trust members can enter the island for free, non-member adult entry is £6.80.

Poole itself makes a great base for exploring the area including some of England’s loveliest sandy beaches, an intersting quayside, Upton Country Park and if the weather’s not so good, Tower Park, the south coast largest entertainment centre, with a 10 screen cinema, bowling, waterpark, soft play and plenty of restaurants. You can find some great deals and compare hotel prices with Holiday.me.

With thanks to Poole Tourism for inviting me and sponsoring my visit to Brownsea Island to photograph these lovely squirrels. 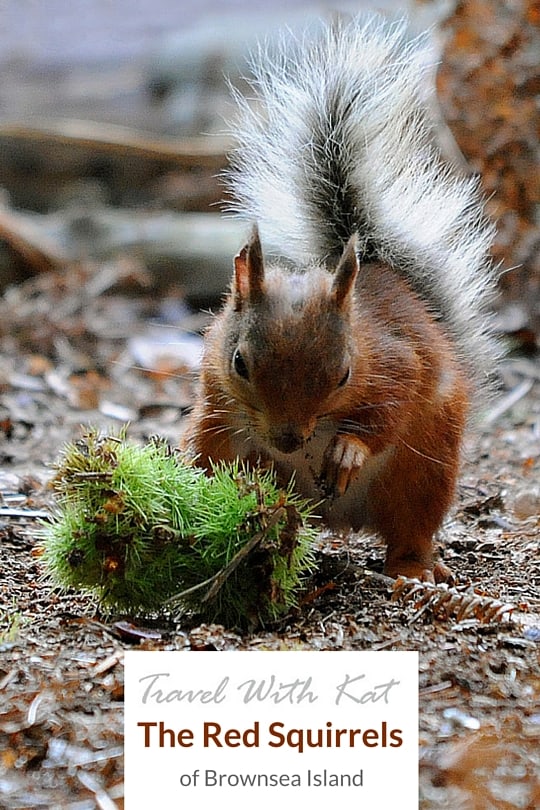 The squelch of grapes and squeals of joy met us in Locorotondo, Puglia, to celebrate the grape harvest in this...