Ponta da Piedade, one of the most beautiful coastlines in the world

Ponta da Piedade, the iconic Algarve, where dramatic honey-hued cliffs rise up from turquoise seas. Limestone arches, caves and pillars, chiselled by the wind and waves, form a spectacular coastline near the laid-back town of Lagos. It’s one of the most visited tourist attractions in Portugal, with good reason, but its popularity can be its downfall. Visit out of season to get the most out of a trip to Farol da Ponta da Piedade, as I did recently with blogging friend Heather, from Heather On Her Travels.

I visited Ponta da Piedade while staying as a guest at the Quinta do Lago Country Club. Find out more in my,  Essential guide to Quinta do Lago in the Algarve.  Please note, this article may contain affiliate links which you can read more about in my Affiliate & Review Policy Disclosure.

Standing on the top of the headland, the views along the coast and down to the sea take my breath away. A flight of steps leads down to a little jetty where small boats are collecting tourists, timing each pick-up to avoid the large waves that periodically crash against the cliffs. It’s February, and while there are a fair few people around, there’s no queue to catch the boat. In summer, the line snakes from the jetty and up the stairs, with no shade to protect you from the relentless summer sun. The best time to visit is out of season, especially if you hope to capture the views without a gazillion tourist, boats and kayaks getting in the way.

We head down the steps and agree on a price of £20 each for an hour’s boat ride for the two of us. Heather hops on first. I’m about to hand her my rucksack when it’s taken from me and thrown into the boat. My unprotected DSLR survives the shock, better than I do. A lesser camera might not have fared so well.

With a skill that only comes from years of experience, our guide weaves the boat along the cliff face, through tiny arches and into grottos, carefully timing each move with the waves. On more than one occasion I was convinced we’d never make it through a gap in the rocks, but we did! Whether you catch the boat at Ponta da Piedade as we have, or from nearby Lagos, out on the water is the best way to admire these remarkable rock formations.

At times it appears that there is underwater lighting hidden beneath the waves, but everything you see is natural — Mother Nature showing off. 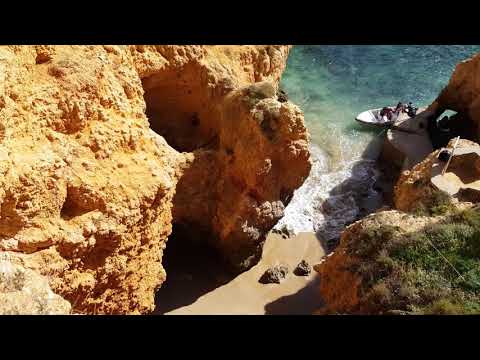 How was Ponta da Piedade formed?

The limestone cliffs are estimated to be over 16 million years old. They are continually eroding and evolving, as the rain, wind and waves sculpt magnificent stone pillars, arches and caves. Great care should be taken when visiting, especially in the winter, when landslides are most common. Always stick to the paths for your safety and to help protect the natural environment.

Did you know? Rainwater picks up carbon dioxide from the air which turns it into a weak acid. When it reaches limestone, it travels along joints, dissolving the rock and forming fractures which can ultimately develop into cave systems.

The area is one of several in the Algarve designated as Important Bird Areas (IBA) by Birdlife International. It’s one of the few places in Portugal where you can find rock pigeons. Seabirds seen here include cormorants, egrets, shearwaters, and storm petrels. The cliffs are also an important breeding site for the peregrine falcon.

The nearby town of Lagos

How to get to Ponta da Piedade

Ponta da Piedade is about 2 miles south of the town of Lagos in the far west of the Algarve. It’s one of the most famous beaches in the Algarve.

Outside the summer months, there is no public transport to Ponta da Piedade, so you will either need to drive, walk (about 30 minutes), take a taxi or join a boat tour at the nearby town of Lagos. There’s a car park, a gift shop, public toilets and a restaurant here.

In summer, a tourist road train runs between the cliffs and Lagos every 55 minutes, costing €3.50 each way. Check up-to-date information on their website, TouristTrainLagos.com. Kayak and SUP (Stand-up paddle board) tours leave from Batata beach in Lagos, some of which include a stop for a swim.