Puglian cuisine: hearty, rustic, delicious and bad for my waistline! 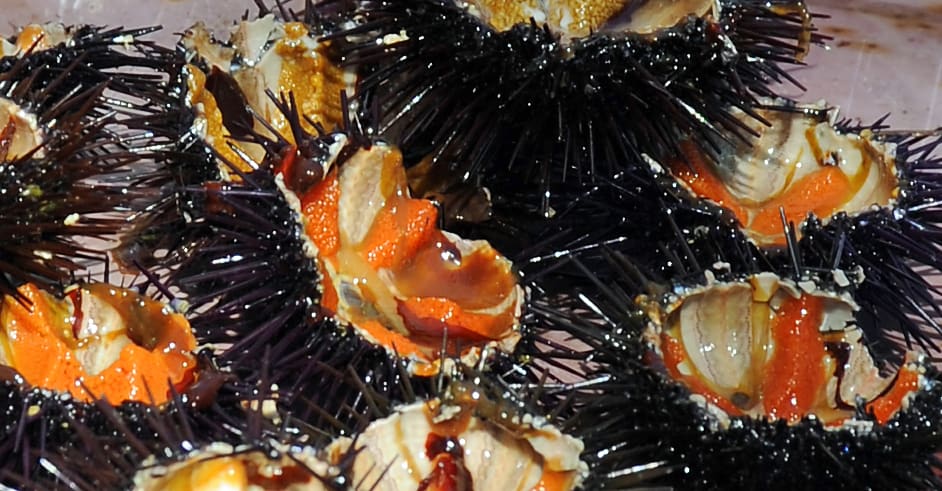 Earlier this Spring I spent a few days in Puglia (Apulia), southern Italy among other things learning about the wonderful cuisine of the area. As Leonardo Di Bari, head chef at the Borgobianco Resort and Spa where I was staying explained, essentially Puglian cuisine can be defined as both “poor” and “rich” in that the principle ingredients simply came from the earth and the Puglian people added value to those ingredients and so the food became “rich”. 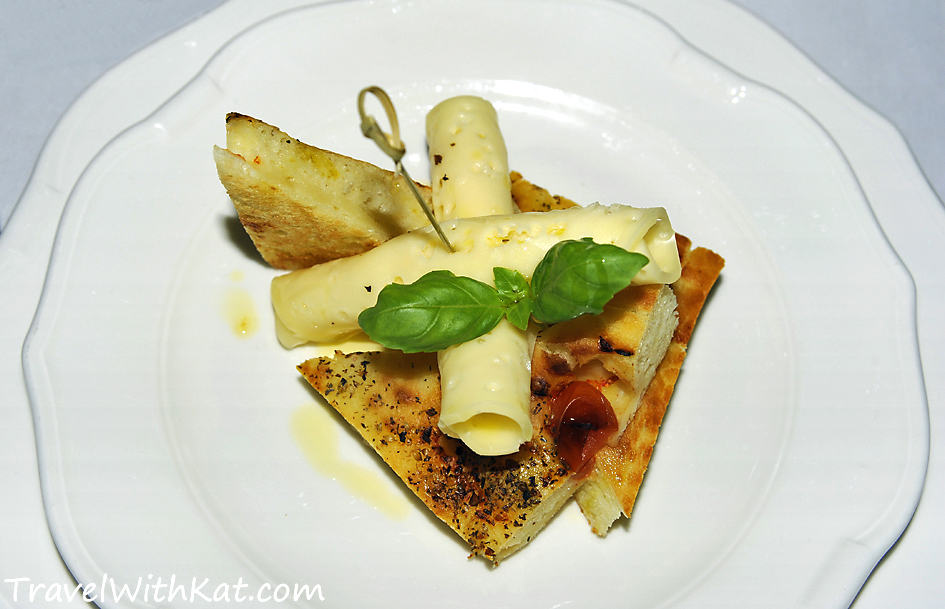 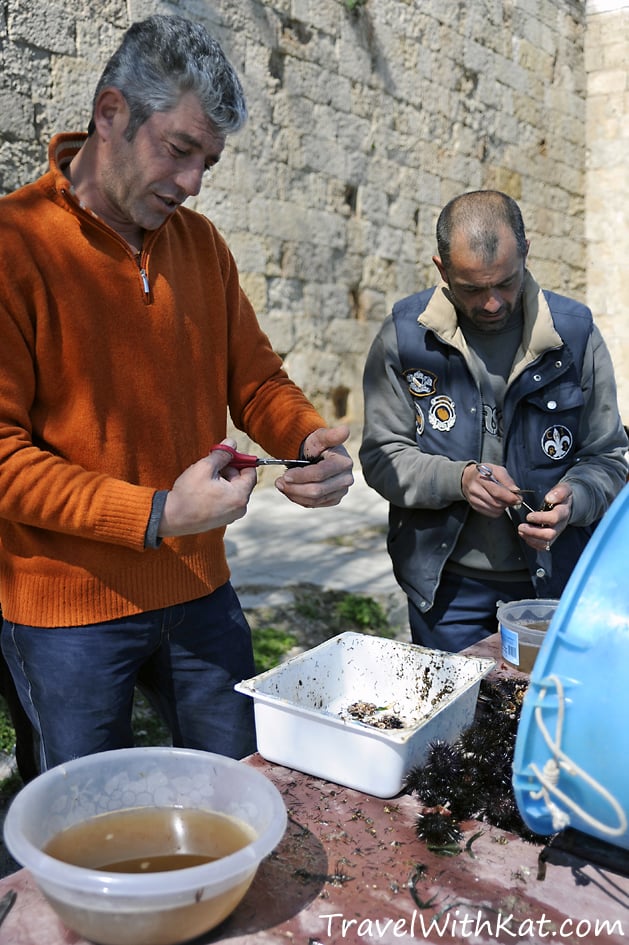 Preparing sea-urchins fresh from the sea

Both pasta and bread are important in this unpretentious diet and one of my favourite traditional dishes served at the hotel was simply focaccia bread with cherry tomatoes and the lightly spiced Puglian cheese caciovallo. Another great accompaniment to focaccia bread, I’m told, are the sea urchins which you can see being collected at the village of San Vito, a few miles away. The café Giselda overlooking the little fishing harbour here is the perfect place to try this local dish, fresh from the sea and served raw with focaccia! I’ve tried sea-urchins before in Senegal and took a serious dislike to them, however, I was assured, that those caught here are delicious, so much so that I was actually disappointed when we were told we were too early and I didn’t get to try them myself (so the jury is still out on this for me!)

We couldn’t hang around as we were off to Polignano for lunch at the delightful restaurant, Infermento, where chef Marcello had prepared a hearty six course lunch for us – potato omelette, cheeses, various breads, pasta, and we hadn’t even got to the main course! And each course was washed down with a specially selected artisan beer to compliment the dish being served as chosen by our host, Giuseppe. 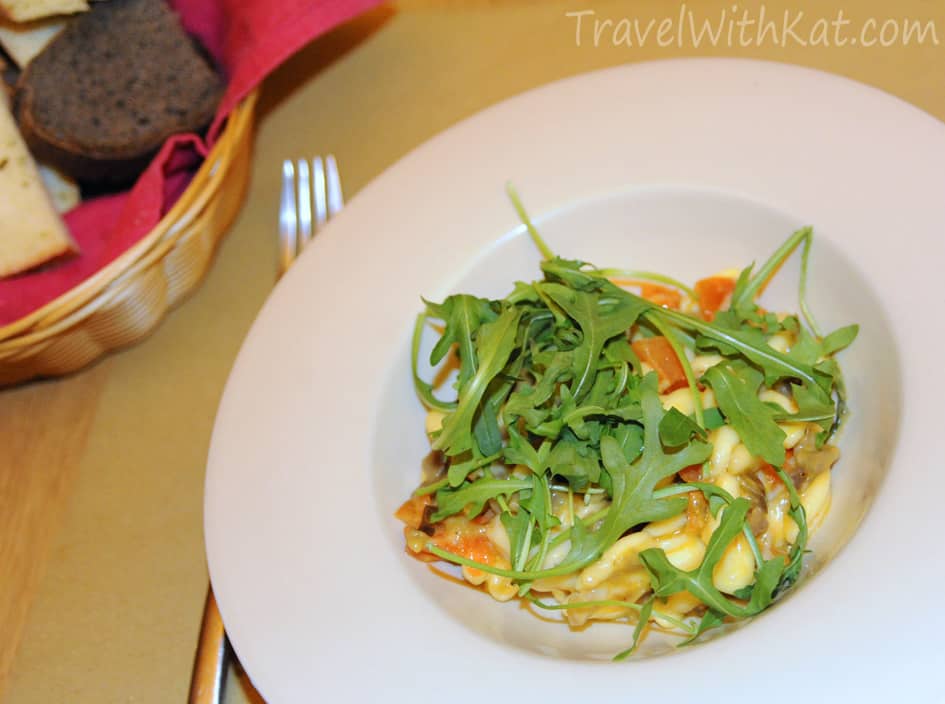 An unusual traditional Northern Puglian ingredient in some bread that I came across during this visit is burnt wheat flour. The tradition arose when, after the farmers had burnt their fields, peasants collected wheat from the burnt stubbs and mixed it with white flour to make it go further. Today the wheat is toasted, rather than burnt, to produce a black flour with a distinct almost nutty flavour.

As well as delicious breads the region prides itself on its hand-made pasta, such as orecchiette (little ear-shaped shells) or cavatelli (small rolled-up shells) made with durum wheat – each piece is rolled by hand unlike many of the pastas typical of other areas which are made by machines. surprisingly eggs, which were once considered a luxury, are not used in traditional pasta of this region.

Later that day back at the Borgobianco hotel another six course evening meal was being prepared for us. The hotel serves a mixture of traditional Puglian and international cuisine all beautifully presented, using ingredients from a variety of small local producers who provide wonderfully fresh vegetables, fish, meat and cheese as well as olive oil and flour (white and burnt wheat flour). Indeed Puglia is very much an agricultural area producing much of Italy’s finest olive oil and wines. 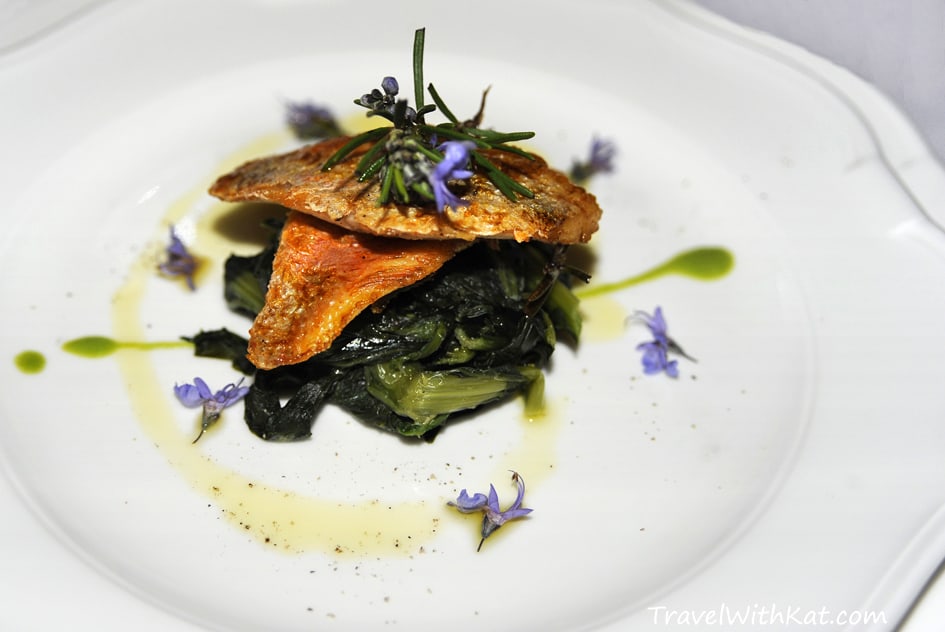 Red mullet fillets with white pepper, rosemary and wild chicory – lovely to look at as well as to eat

The rocky interior is good sheep-farming country and lamb is commonly featured on menus and traditionally served at festivals. This also means that many of the regions cheeses are made from sheep’s milk. Puglia’s long coastline and strong fishing tradition provides an abundance of fresh seafood including red mullet, anchovies and mussels. The region also produces vast quantities of almonds which are used abundantly in desserts. 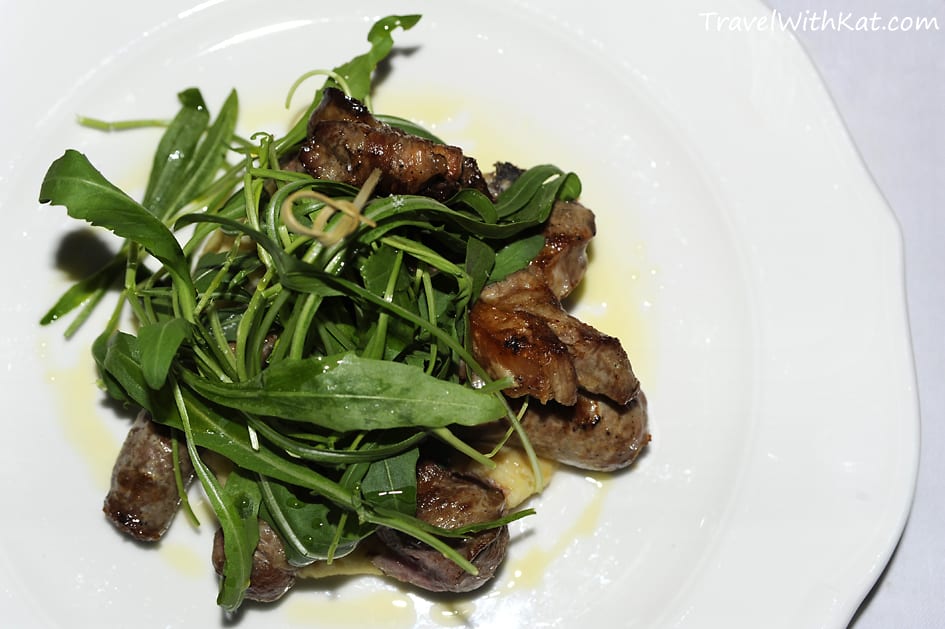 The superb array of quality fresh local produce mixed with a home-cooking tradition gives Puglian food its simple country character that is so full of goodness and natural flavour. Admittedly I only have to look at food and I put on weight but never-the-less I am ashamed to admit I put on 5 pounds in weight during my few days in Puglia – not because the food was particularly fattening, it’s just that I was offered so much of it and it was so very delicious that it was hard to say no! And of course I wanted to try everything that this wonderful region of Italy had to offer, including the home-made ice-creams, fine wines and great locally produced beers. Puglian cuisine does not yet get the international recognition it deserves and, although I did lose the weight I had gained (eventually) once I was home again, it is just as well I was only there a few days!

A huge thank you to chefs Leo and Marcello for delighting my taste buds (and expanding my waistline).

Last weekend I had a really wonderful night out at SEN NIN - Japanese Teppanyaki & Sushi Restaurant in Camden, London. Update: The...