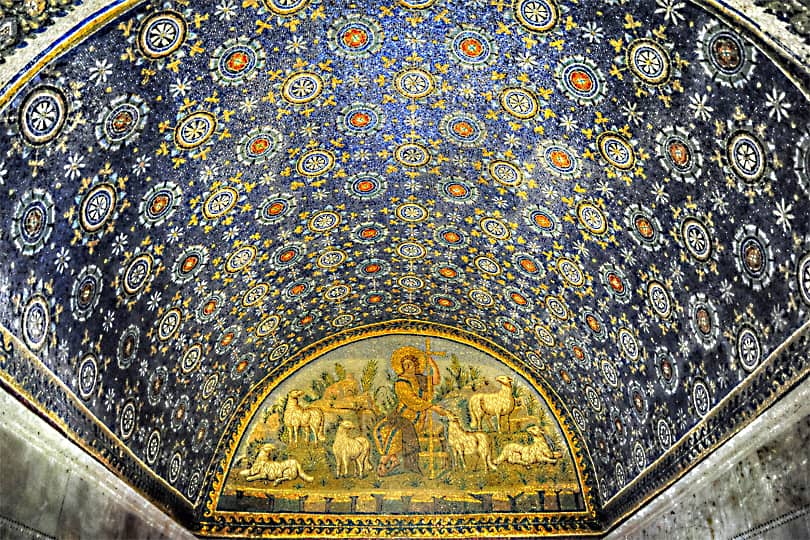 While I had heard of the Ravenna mosaics, I had no idea just what an amazing experience visiting them would be. They are among the most beautiful things I have ever seen and it is no wonder that these unique early Christian monuments are all listed as UNESCO World Heritage sites. I was lucky enough to visit 4 of the 8 sites, in and around Ravenna, with the Emilia-Romagna tourist board.

In the 5th century, Ravenna was the capital of the Roman Empire and also of the Byzantine Italy that followed, right up until the 8th century. The stunning Ravenna mosaic masterpieces that follow were all built in the 5th and 6th centuries. You can read a brief history of Ravenna here.

As was the tradition the exterior of the Mausoleum of Galla Placidia is rather plain and gave no clue to the wonders inside. As I passed through the doorway, my eyes slowly adjusted to the light and I caught my breath at the sight of the lavishly decorated interior made of thousands of pieces of coloured glass. The iconography used represents the victory of eternal life over death.  Each visitor is only allowed 5 minutes so as not to disturb the micro-climate inside but I think you’ll agree this is something that is well worth looking after. The lower portion of the walls are lined in marble but the upper portion and all the ceiling is covered in the most beautiful of mosaics I have ever seen.

A well as the light from a number of alabaster window panels (shown above and below), electric light was also being used but originally there would have been flickering lanterns that would have made the gold in the mosaics twinkle.

A panel showing Christ as the Good Shepherd tending his flock. 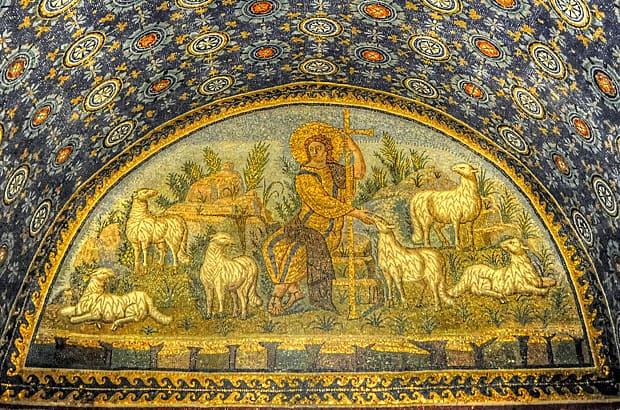 If you would like to know more about this building and the powerful woman who built it, Galla Placidia, the daughter of Emperor Theodosius I, there is an interesting video on the Smart History website. For further information including opening times visit Tourismo.ra.it.

Below you can see some samples of the type of small pieces of glass that make up the mosaics.

This article is now available to download for free on GPSmyCity. It can also be upgraded to include an offline map and GPS guided travel routes. Follow this link on your mobile or android device to find out more, Walking Tours in Ravenna.

Construction of the basilica started in 526 by the Goths on the site of the martyrdom of St. Vitalis but it was the Bynzatines that finished it in 548, having taken Ravenna some 8 years earlier.

The great cupola is decorated in 18th century murals (above and below) which are rather out of keeping with the rest of the church and its Byzatine mosaics.

Here there is no time limit to your visit but as is so often the case, I was so busy trying to get some good images (which was not easy because of the crowds and the terrible lighting) I nearly forgot to simply stop and soak it all in.

I suggest you first sit down and admire it. And only then snap away and grumble at the people standing quite obviously in your way (without realising, no doubt, that you are most probably in another photographers way yourself).

Don’t be fooled into just looking up, the floor is also quite lovely and includes this labyrinth. Rather than leading you into the centre of the maze the arrows lead you from the centre out.

A sumptuously decorated chapel erected by Ostrogoth King Theodoric the Great as his palace chapel during the first quarter of the 6th century. Another wonderful place but with fewer visitors.

This small octagonal building was also erected by the Ostrogothic King Theodoric the Great between the end of the 5th century and the beginning of the 6th century.

While I only visited four of the UNESCO sites in Ravenna there are another four which I am told are well worth visiting if you have time.

For further information on these and other sites, including virtual tours, please visit Tourismo.ra.it.

View Emilia-Romagna in a larger map

This article is now available to download for free on GPSmyCity. It can also be upgraded to include an offline map and GPS guided travel routes. Follow this link on your mobile or android device to find out more, Walking Tours in Ravenna.