The deliciously stinky cheeses of Rimini 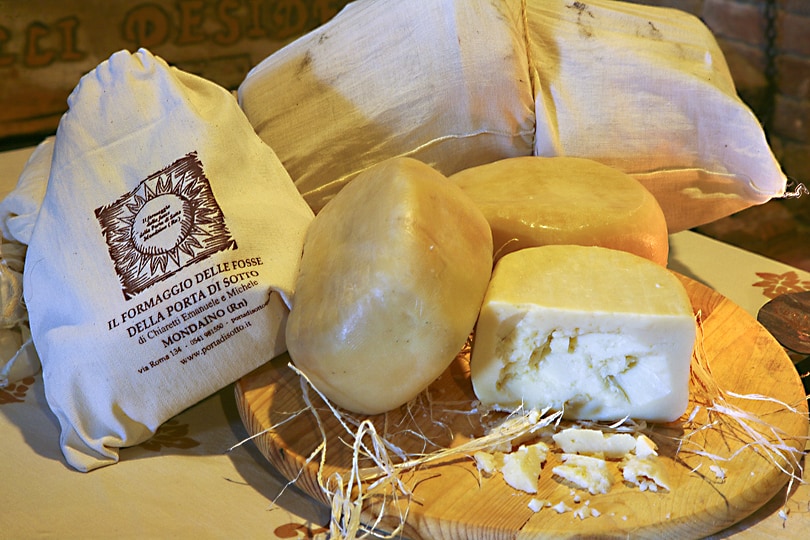 Rimini, on the coast of Emilia Romagna in Italy, is best known for its beaches and nightlife but it is all too often overlooked that the region is an area of great natural beauty with a rich rural heritage and a cuisine to rival that of its better known gourmet neighbours, Bologna and Parma.

I was lucky enough to discover this for myself last summer. One day, in particular, stands out for me where we explored the Rimini countryside. As well as a great cooking lesson making Piadina in a remote farmhouse in the hills, I also had the chance to learn more about the regions delicious cheeses. While several Italian cheeses are now household names around the world, there is a myriad of lesser-known regional specialities that are well worth tracking down.

The best-known cheese from this region of Italy is Formaggio di Fossa (pit cheese) and its production dates back to the 15th century when it is believed that the citizens hid their cheese from invaders and thieves in underground pits. When the cheese was later exhumed, its taste had changed, as had its now, very noticeably, pungent smell. I learnt about pit cheeses in the village of  Mondaino (about a 45-minute drive from the centre of Rimini), where I tried it drizzled in aged balsamic vinegar, a divine combination. 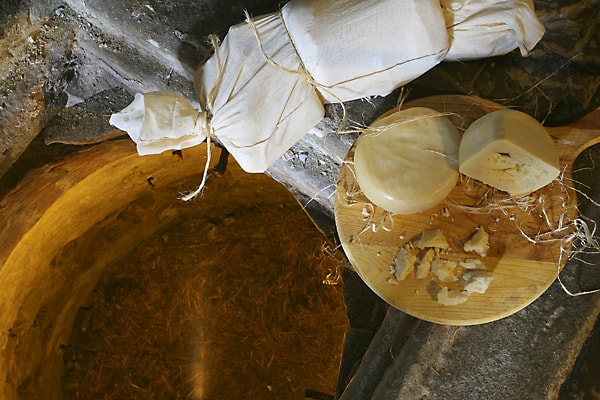 Fossa can be made out of pure sheep’s milk or a mix of sheep and cows’. The cheeses are aged for 3 months before being placed in the sandstone pits in August and removed in November. In the village of Sogliano al Rubicone this has become quite a festival when all the pits in the village are opened at once and the smell from the cheese is intense, enveloping the whole village and the surrounding countryside. 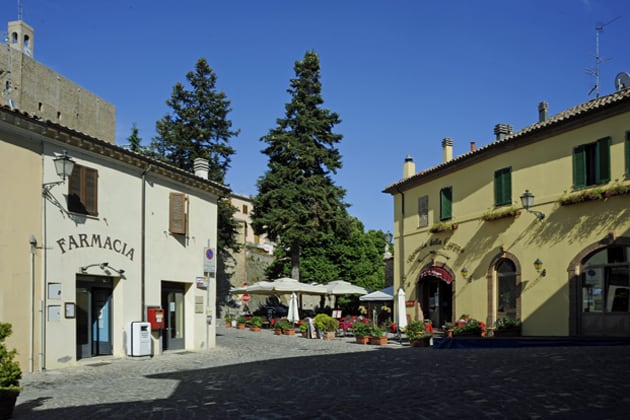 After leaving Mondiano we drove through some spectacular scenery and passed through a couple of very pretty villages including Gemmano (pictured above) but sadly there wasn’t time to stop as we had more cheese to taste! 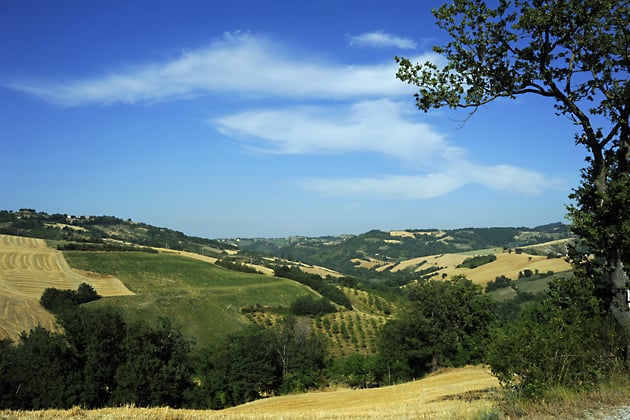 View from the road leading to ‘Il Buon Pastore’

You’ll find many traditional cheese producers in this area and our next stop was the sheep farm, Azienda Agricola ‘Il Buon Pastore’ which translates as the good shepherd, in Montefiore Conca. 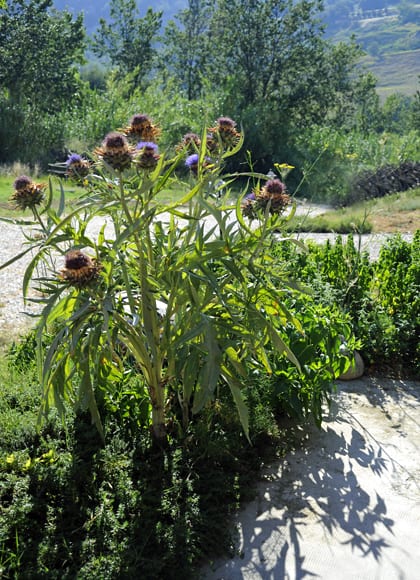 When we arrived one of the first things we noticed were the pretty bunches of thistles hanging down from a terrace ceiling. It turned out these weren’t for show but are used to produce a thistle rennet, a milk coagulating enzyme used in the production of their cheeses. 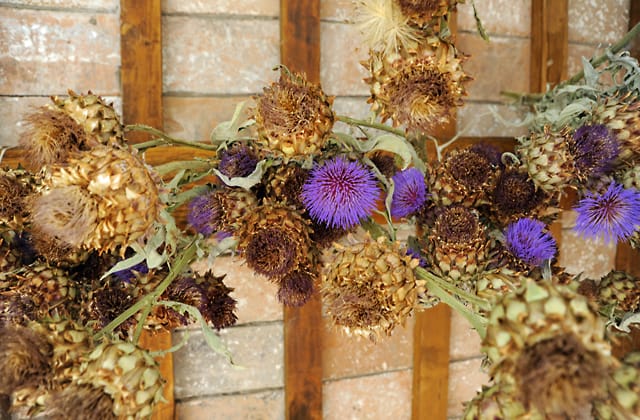 Inside we found a wonderful variety of the lovely cheeses laid out for us to try, pecorino and ricotta… moldy cheeses, cheeses wrapped in leaves, aged cheeses, young cheeses…. all washed down with a delicious local white wine from Corinano. 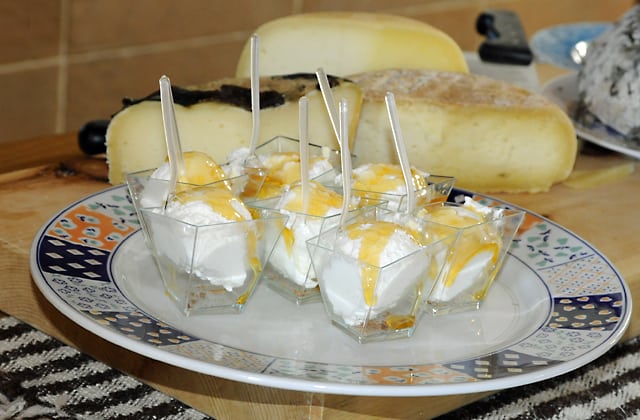 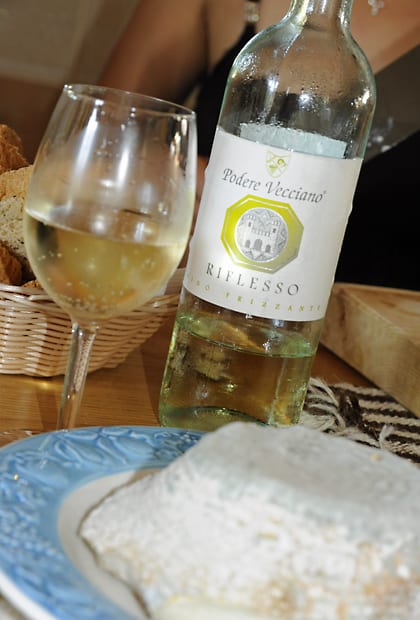 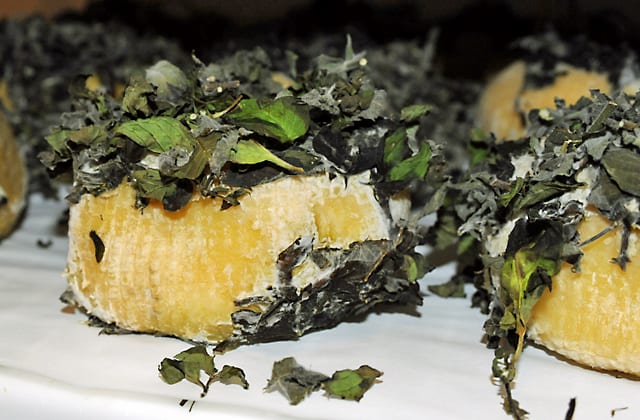 Wrapping cheeses in leaves probably started as a way to keep them moist while transporting them. Nowadays it is solely used for the subtle flavours the leaves give these artisan cheeses.

The farm we visited doesn’t advertise anywhere but instead rely on word of mouth to produce a steady trickle of visitors wishing to purchase their cheeses, as well as selling to some exclusive hotels and specialist shops in the area. While we were there someone popped in who had heard about the wonderful cheeses from a friend.

If you are in the area and wish to visit the farm and buy some of their cheeses here are the details. Ring first and let them know you would like to visit (but if you don’t speak Italian have an Italian speaker to hand as the owners speak very little English).

Directions: from Morciano di Romagna climb towards Montefiore, at the roundabout go straight on in the direction of San Felice Tavoleto for about 2 miles, turn left on Via Ca ‘Santino and continue for another mile or so.

Recommended for you
How to make,cut and shape fresh pasta
Authentic balsamic vinegar from Modena
Learning how to make cheddar cheese in Cheddar Gorge 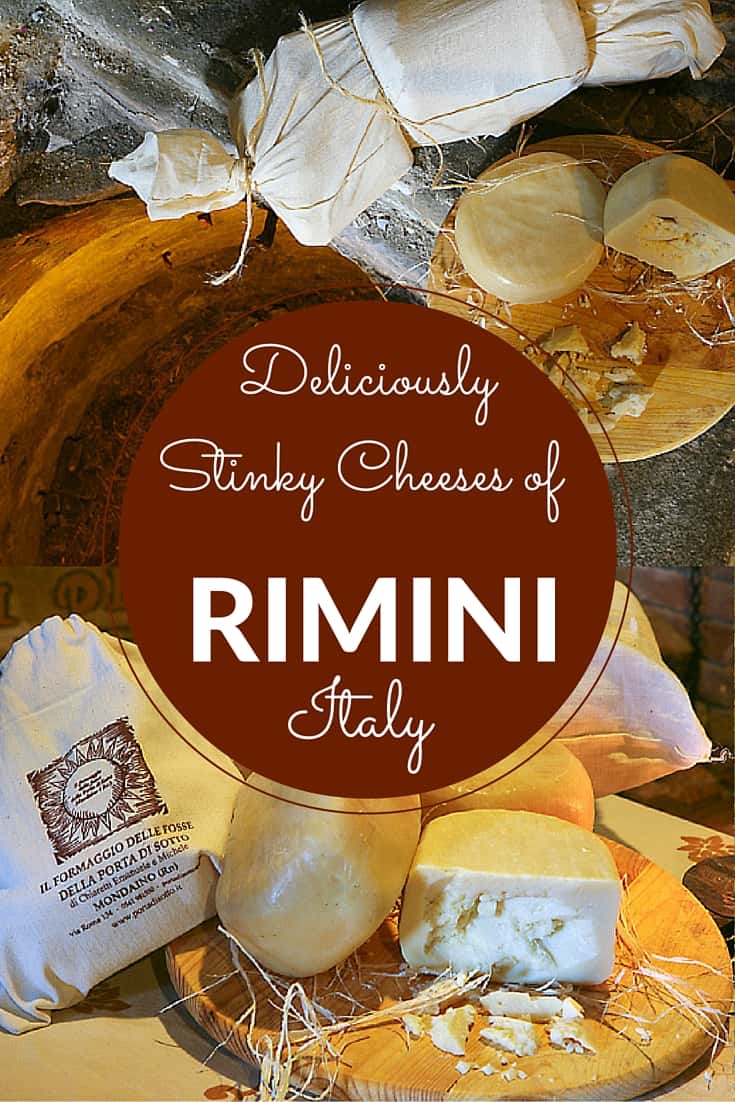 Fossa photographs courtesy of the Photographic Archive of the Province of Rimini / P.H. Paritani

A mini guide to the street food of Florence

Following on from a couple of other great street food guides I have featured on Travel With Kat here, Debra...