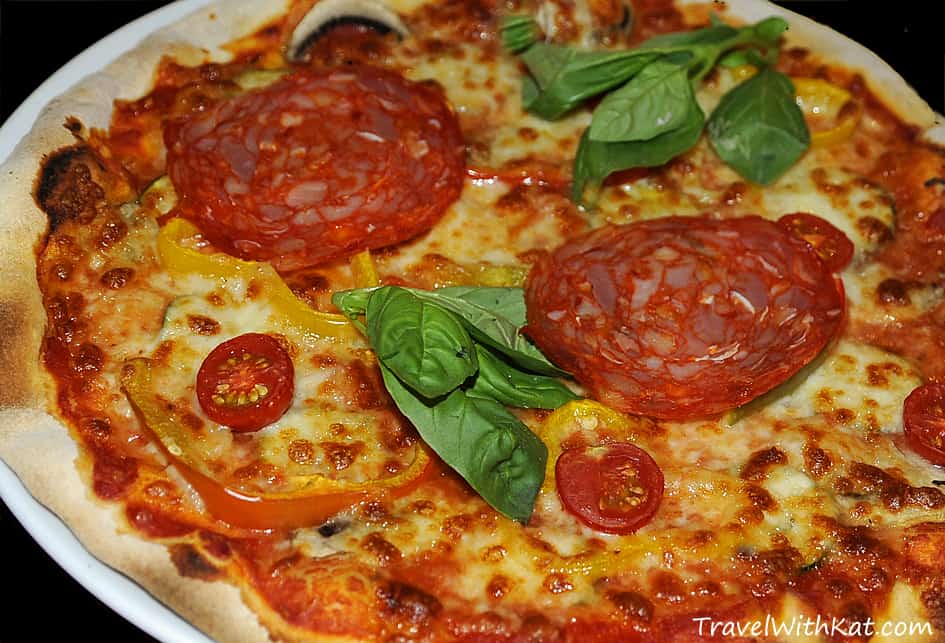 On the final full day of my first visit to Rome, I spent a delightful morning exploring the Campo de Fiori market plus a local baker’s, a butcher’s and two restaurants. We tasted a variety of olive oils, balsamic vinegars, pizza bianca, cheeses and salami with the charming Simona, our Rome Food Tour guide from Walks of Italy and my new American friends who were also on the tour. You can read all about the wonderful time we had in my post about the best food tour in Rome. Here I’d like to share this fabulous Roman-style pizza recipe which we tried for ourselves at the end of our tour.

As noon approached, I had already learnt so much about Italian food, and eaten a fair bit of it too, but the tour wasn’t over yet. We were off to Ciccia Bomba, which translates as ‘Fat Guy’, to learn how to make pizza! This wonderful restaurant is in the heart of Rome on the Via del Governo Vecchio. We arrived at Ciccia Bomba before the lunchtime rush and settled in at the back of the restaurant.

In Rome, they like the pizza base to be thin and crispy whereas in Naples the pizzas are lighter and softer with a pillowy texture. The main difference is down to the dough. Both are made with flour, water, yeast and salt, however, in Rome olive oil is also used so that the dough can be stretched by hand wider and thinner giving a crispier pizza.

One of the best-known pizzas is, of course, the Margherita, named in honour of the first queen of the united Italy in 1889. The toppings used, namely tomatoes, basil and mozzarella, represent the colours of the Italian flag – red, green and white. Unlike the mozzarella we had tasted earlier which was made from buffalo milk, the mozzarella used on pizza is from cows milk.

Sadly, we did not have time to make the dough on the tour as it needs to stand for 24 hours before being used so we were given some already prepared (cheating somewhat don’t you think!) we still had fun being shown how to roll out the pizza into a perfect circle or thereabouts, choose our toppings and baking them in the oven. Even though I say so myself, my Roman pizza really was rather delicious. However, I was so full of all the wonderful treats we had tasted throughout the morning, I couldn’t manage much of it so most was saved for later! This lesson was the perfect end to the food tour and great fun.

If, however, you’d prefer to make pasta rather than pizza, check out my pasta recipe and video.

Alternatively, if you’d like to really get to grips with Roman cooking, then sign-up for one of these great cooking classes in Rome.

Here’s Georgio’s Roman Pizza recipe (he’s been a pizza chef for 26 years so he should know what he’s doing by now!)

A classic pizza in Rome is the Capricciosa: topped with ham, mushrooms, olives, artichoke, an egg and tomato.

The precise amounts of ingredients for the dough actually varies depending on room temperature and humidity and so forth. If you find your dough is too dry add a little more oil and if it is too wet a little more flour.

You will need to leave your dough for 24 hours before baking. Divide the dough into 12 to 16 balls. Roll out the number of pizzas you wish to make until the dough is really thin. Freeze the remaining balls.

Heat your oven to its maximum heat and put in the pizza base for 30-40 seconds.

Remove from the oven and put on the tomatoes followed any other toppings you desire (in my case salami, basil, peppers and mozzarella).

Lower the heat a little and put back in oven until the pizza is crisp and golden (check after 8 minutes).

If you find your toppings are cooking before the base try covering it in foil and continue cooking (or it could be that your base is too thick for this Roman style pizza).

For dessert, we had peaches bought that morning in the market, drenched in red wine with a little sugar. Simple but delicious! As Hande, a wine expert I met in Rome, suggested in the comments, this custom originated in Campania and a lighter red wine from that region is perfect for this dish.

Going solo in Rome
How did I find travelling on my own in Rome?

Pairing Italian Wine and Food
Learn the basics of wine tasting and pairing food and wine.

On a mission to discover Rome’s food and wine!
My arrival in Rome, when I discover where to find great gelato and how to tell if it is genuine artisan gelato plus I visit a cafe in a fashionable district of Rome where you can buy a plate of pasta with a glass of wine for just 4 euros.