Roubaix and the art of reinvention 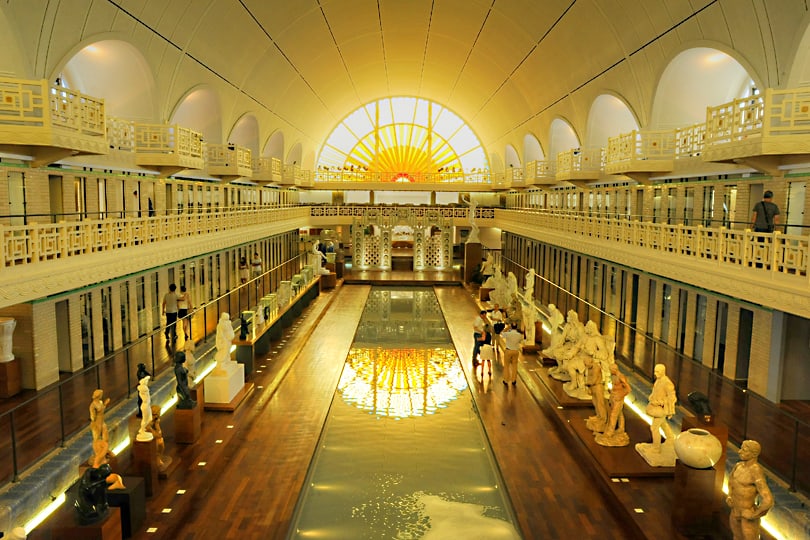 If ever a town has mastered the art of reinvention it has to Roubaix on the outskirts of Lille in northern France. Where else can you dine at a garage or foundry, admire magnificent sculptures and paintings in an art deco swimming pool and sleep in a bubble or an artist’s workshop? Welcome to Roubaix.

Once a flourishing textile town specialising in woolen goods, Roubaix was seriously hit by the globalisation of the industry in the 1970s. Many impressive buildings became disused but an extensive renovation program has breathed new life into this charming town, rich in industrial heritage and unique architecture. The former warehouses and factories are now home to universities, shops, dance studios, artists workshops, even restaurants and a former swimming pool is now a stunningly beautiful museum. Roubaix is once more thriving with a colourful artistic community, it is also a haven for shopaholics with over 170 factory shops offering major brands at bargain prices throughout the year. You’ll also find original clothes and accessories not found anywhere else. And I loved it all!

In the early 20th century the living conditions of the workers were dreadful. In 1927 the mayor of Roubaix, Jean-Baptiste Lebas, who later became France’s Minister for Labour, commissioned Lille architect, Albert Baert, to design public swimming baths for the workers.

The original entrance to the baths. The entrance now is on rue de l’Espérance

Opening in 1932 the result was magnificent; a flamboyant Art Deco building with oriental influences, the swimming pool was said to be the most beautiful in France. Men and women bathed separately and in addition to the main pool there were over 40 individual bathrooms. These could be rented for half an hour for an affordable fee. At that time the workers would not have had access to hot water at home so women often used the baths to wash their laundry as well as themselves! There were also steam rooms, a garden, chapel and restaurant. Services on offer included hairdressing, manicures and pedicures. 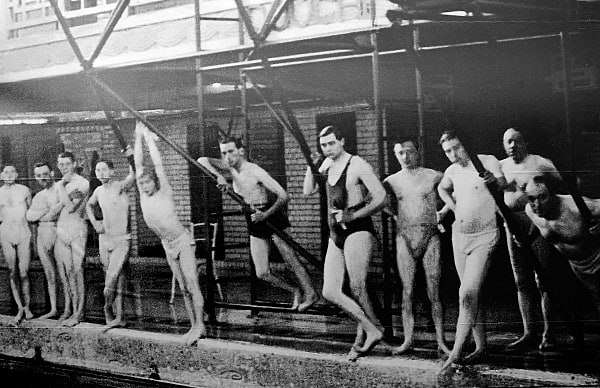 Can you believe that the original swimming costumes were made of wool!

As well as a being viewed as the most beautiful swimming pool in France and an exemplary centre for hygiene, La Piscine became a place of social integration where people from all walks of life came together.

Then came war and the German occupation. Lebas, La Piscine’ founder, became a leading figure in the French resistance and even after he was deported and sentenced to hard labour, he was re-elected as mayor not once but twice. Sadly, unknown to the loyal citizens of Roubaix, before his second re-election he had already died.  In 1949, a monument was raised to his memory and his body was not returned to France until 1951. His death was a great loss and he is celebrated not just as an advocat for the working man but also as a hero of the resistance.

The swimming pool was forced to close in 1985 as the structure had become unsafe but the site was re-designed by Jean-Paul Philippon, fully renovated and reopened as an art museum in 2001. It was without doubt the highlight of my visit to the area not only was the building stunning, the story behind it fascinated me and I was quite taken by some really beautiful sculptures and wonderful paintings. My attention span in museums and galleries is sadly limited and I’d rather go back a number of times to larger places as opposed to trying to see everything in one go but La Piscine is just the right size and more than kept my attention throughout! 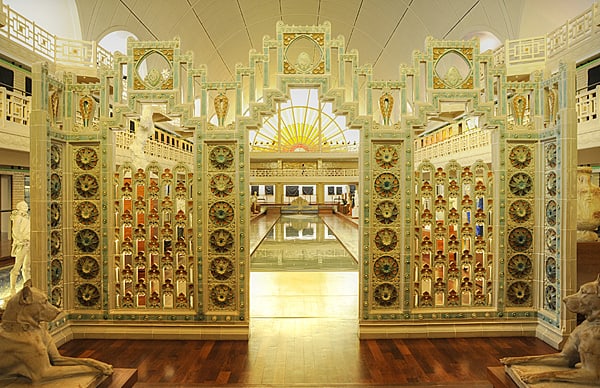 From Sèvres, a south western district of Paris well known for its ceramics and porcelain in the transitional style of art nouveau and art deco

The impressive collection is from the 19th and 20th century with textiles, ceramics and glassworks in addition to the sculptures and paintings by both local and international artists. The former changing and shower cubicles of the pool have been put to good use and are now exhibition rooms displaying textiles, ceramics and fashion items. 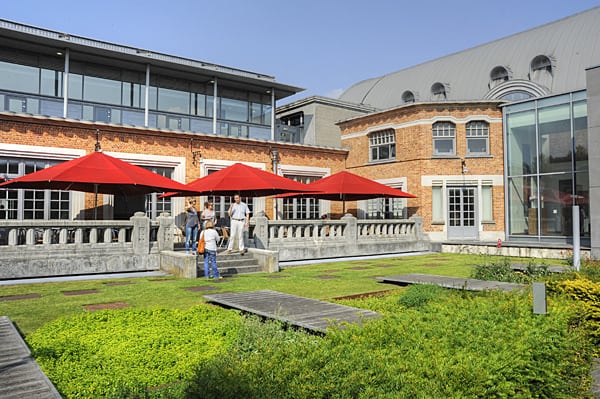 The restaurant is also quite charming and the original decor has been preserved here too. Adjacent to this is a lovely terrace in a courtyard containing a garden full of plants associated with the textile industry.

The area around La Piscine is buzzing with creativity with artists workshops, art galleries, fashion shops and Le Vestiaire part of the Maisons de Mode project. This fabulous initiative in Roubaix and Lille utilises renovated studios and nurtures young fashion designers. The result is a fabulous collection of new labels for those who appreciate design and originality as well as quality. 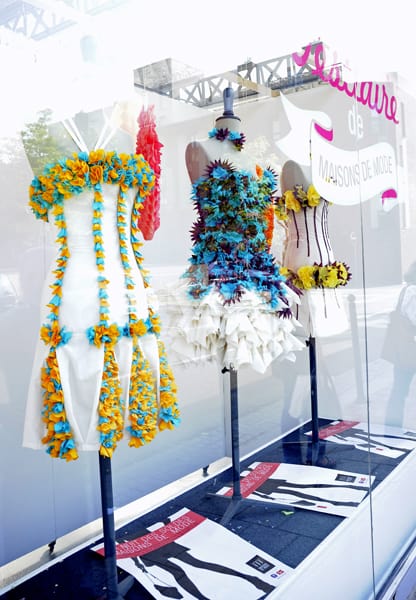 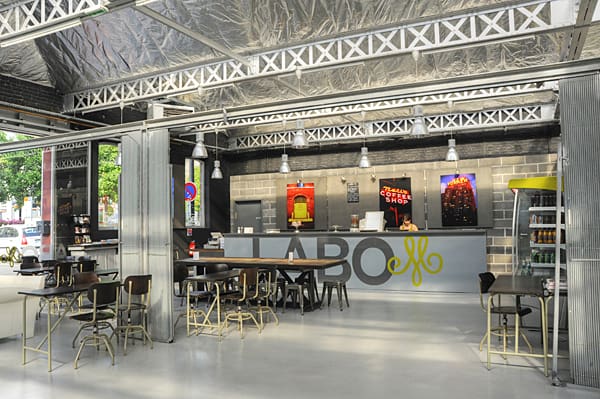 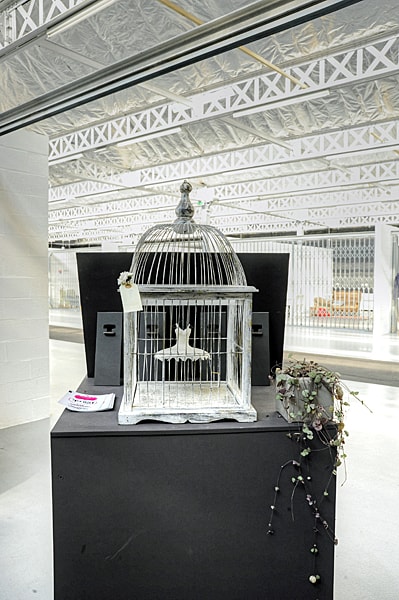 In the evening we had another treat in store, dinner at La Fonderie. Of course you can guess by the name that this was once a 19th century foundry. Now it has been re-invented as an atmospheric, modern restaurant without losing sight of it industrial past. 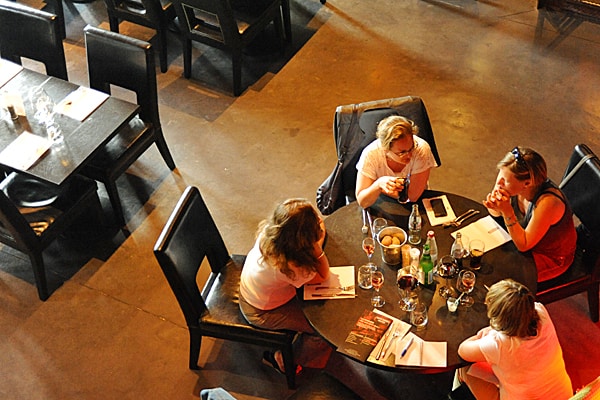 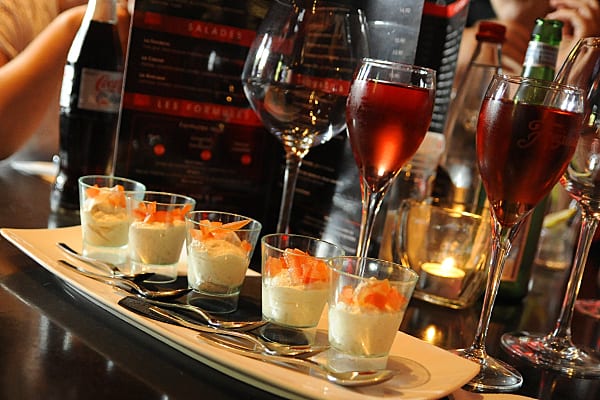 Roubaix is not afraid to be different.
In fact, it embraces it wholeheartedly.

Do you need to ask if I fell in love with Roubaix?

Thank you to Roubaix Tourist office, Lille Metropole, Nord Tourism and P&O Ferries for a really wonderful weekend. All opinions expressed are my own. More from my weekend in Lille Metropole coming soon.

Tzatziki recipe from the island of Crete

I love tzatziki so when Becci from Girls' Travel Club offered to share this recipe I was delighted! And for...