Volcanoes, cave houses and the lost city of Atlantis 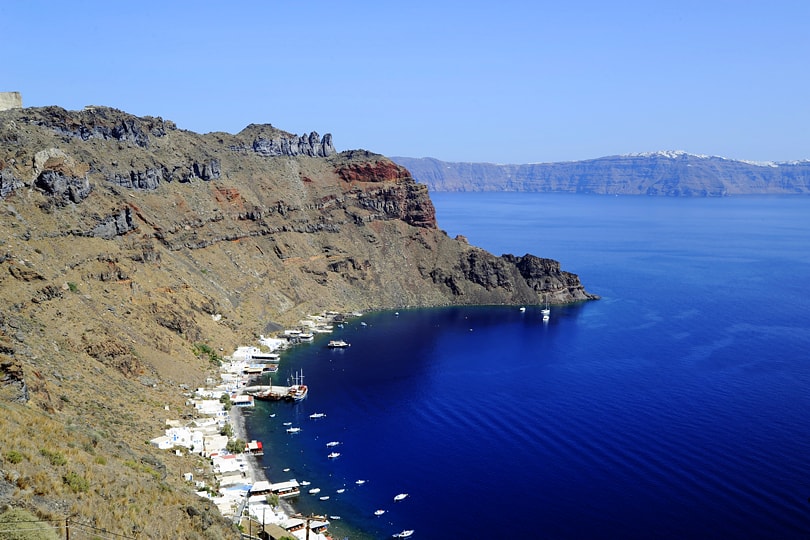 Walking through the countryside, the scent of thyme is released into the air as we brush past the low growing shrubs parched from the summer’s sun. The abandoned village of Akrilia comes into view. The now exposed caves that were once homes look ancient. Yet it was only a few decades ago that some 700 people lived here – lived, married, bore children, laughed, cried and gossiped with the neighbours – just like any other village in Greece.

My day started at a very civilised hour when Kathrin, from Santorini Experts, picked me up at 11.30 in the morning and off we trundled to Oia. We had half an hour to explore the pretty harbour, before catching the boat to the neighbouring island of Thirassia. 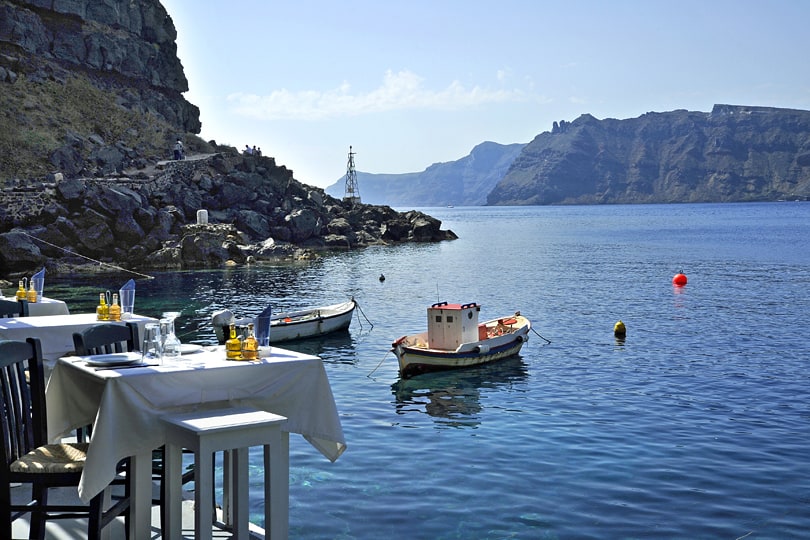 Above: view from the harbour at Oia across the caldera to Thirassia

The birth of the Burnt Islands and the death of Atlantis

Santorini was once one round island, formed over many years by a series of volcanic eruptions, but around 1630BC, it exploded with such force, disgorging such a vast volume of magma, that the island collapsed in on itself, forming a caldera that filled with sea water. The land that remained above the water had become three islands – Thira by far the largest and more commonly known as Santorini, Thirassia (also spelt Therasia), meaning daughter of Thira, and the tiny island of Aspronisi.

More recently, only about 300 years ago, two new islands arose from the sea in the middle of the caldera, as the still active volcano continued erupting and spewing out lava. Known as the New and the Old Burnt Islands, Nei Kemani and Palea Kemani, they are the youngest land masses on earth. 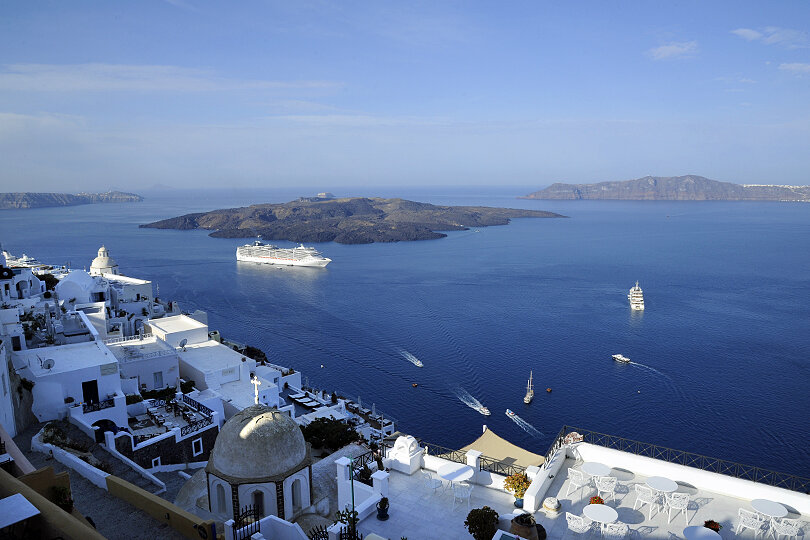 Above: A view of the Burnt Islands, in the centre of Santorini’s caldera, from Fira on the island of Thira. The land mass top left, is the southern part of the crescent-shaped Thira while the land top right, is Thirassia and you can just make out the zigzagging path that climbs up to Manolas.

The 17th century BC eruption was one of the largest in the history of mankind. As the majority of the original island disappeared beneath the waves, the remaining land was buried under as much as 60 metres of ash and stone, and the sun was blotted out for many months. This may well have given rise to the myth of the lost city of Atlantis, and it is now believed that it was this eruption and in particular, the subsequent tsunami, that devastated the Minoan civilisation on Crete, some hundred miles away.

Atlantis was first described by the Greek philosopher Plato more than 2,000 years ago. While many think the story is just a myth, others believe it is based on an actual historic disaster.

Plato’s account, written around 360BC, says that Atlantis was a major sea power, ruled by a descendant of the sea god Poseidon. However, as the divine lineage became diluted with mortal blood, the gods became more and more displeased with the people of Atlantis until they decided to destroy it and the island sank into the sea overnight.

Many people have looked for the lost city of Atlantis and one plausible theory is that Plato was describing the Minoan civilisation on Crete and Santorini.

Whether this is true or not we’ll probably never really know.

The Roses of Thirassia

Today, as our boat draws nearer to the cliffs of Thirassia, we can still clearly see strange circular rock formations made by this catastrophic eruption nearly 4,000 years ago. As Kathrin, my guide explains “We call them the ‘roses of Thirassia’. They were formed by flying rocks hitting the wall of the caldera after the mountain collapsed. As far as I know, in Santorini they are only to be found in Thirassia.” 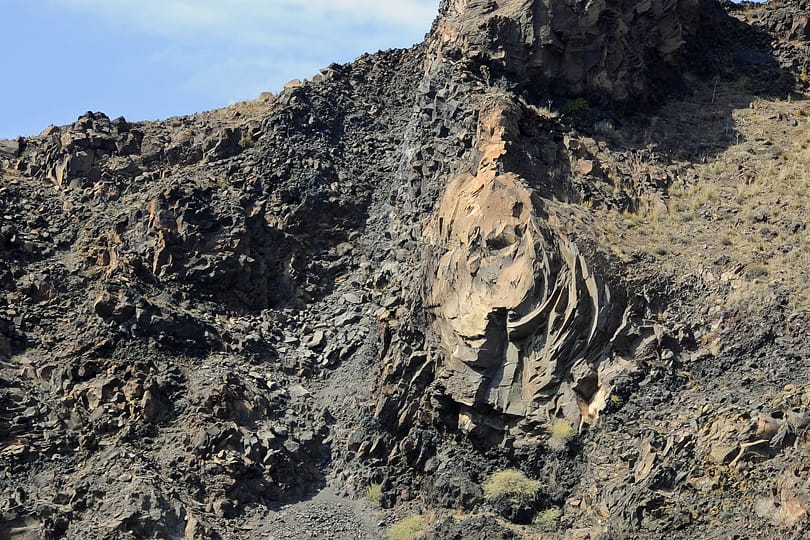 As we edge our way round a headland the little port of Korfos comes into view, a pretty destination for many day trips from Santorini. We can also clearly see the path, with over 280 steps, that climbs up the cliff face to the village of Manolas where we are heading. 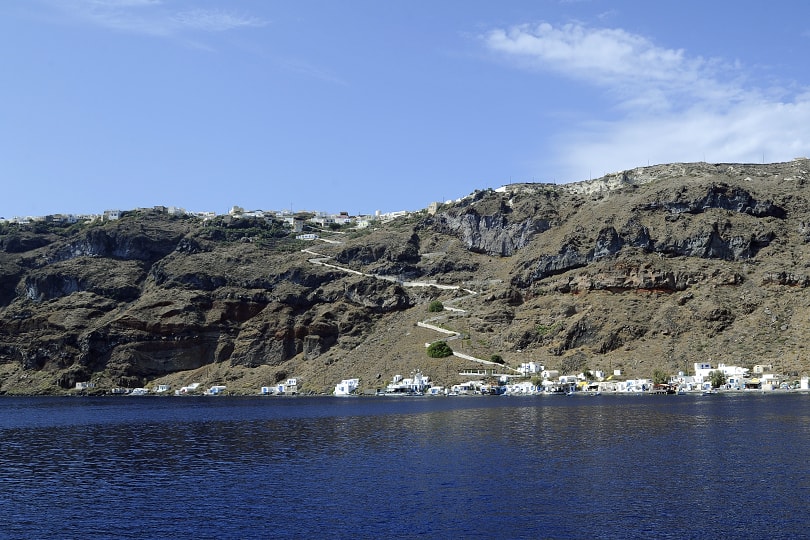 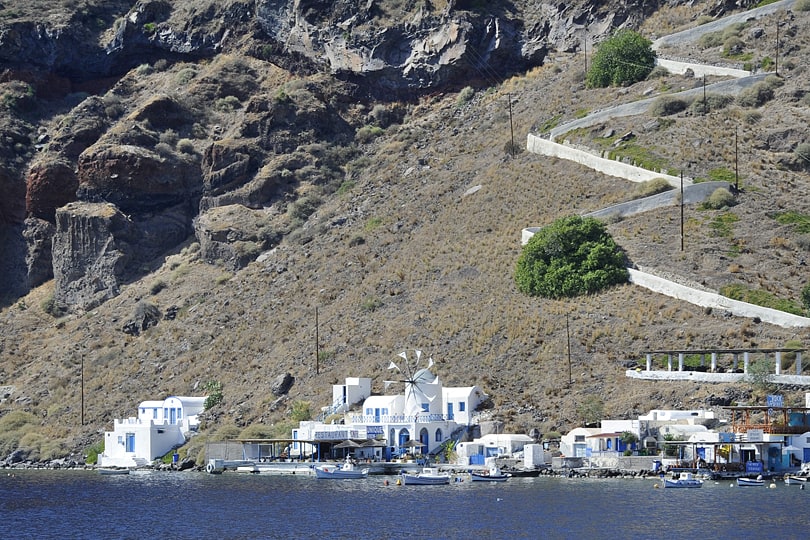 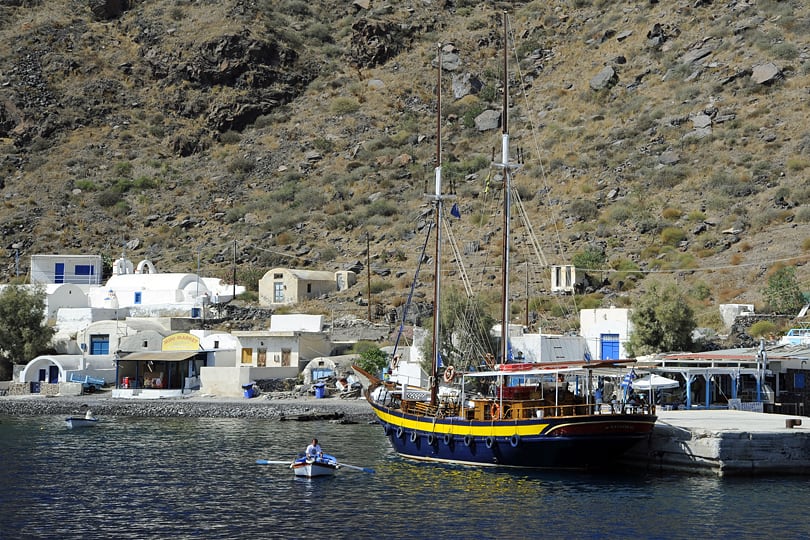 While I would clearly love to walk the path up to Manolas (clears throat) I opt instead, always seeking new experiences, to go by donkey.

The ride is somewhat precarious, my feet not even reaching the stirrups. My donkey keeps wandering off to one side, brushing against the low wall that lines the path.  The view beyond the wall, that I seem in danger of toppling over, is breathtaking, leaving me with mixed feelings of pure enjoyment and vertigo induced terror. Luckily, the unladylike dismount that follows is only witnessed by my donkey and the man leading him. 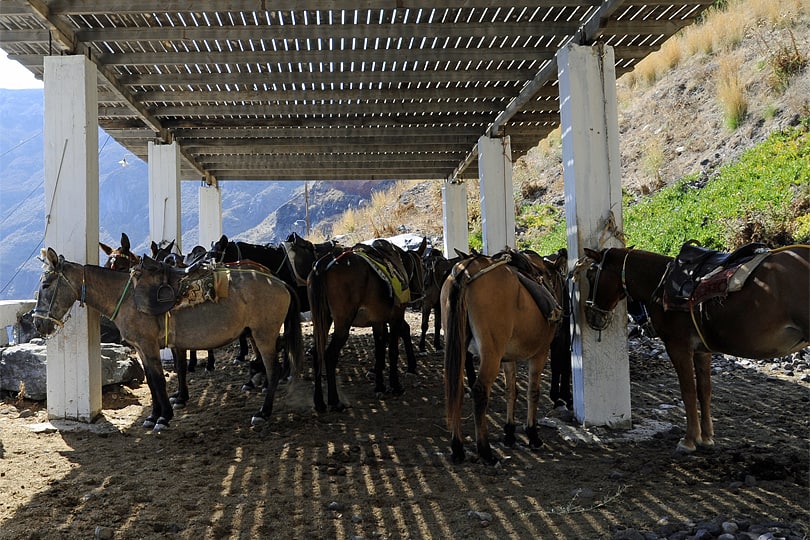 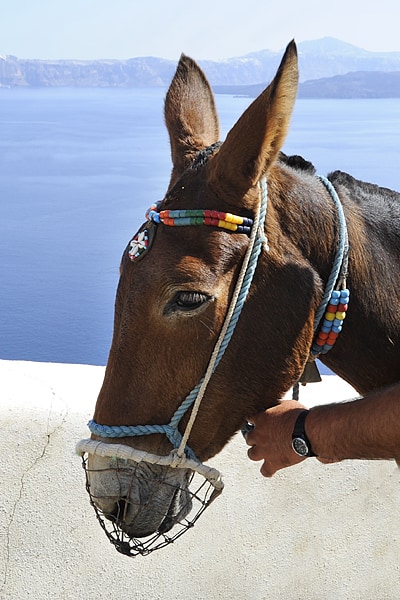 My feet firmly on the ground again my eyes devour the view. And what a view it is, looking out across the calm deep blue water of the caldera to the cliffs of Thira, the distant village of Imerovigli looking like a layer of freshly fallen snow.

The Cave Houses of Manolas

A delicious smell of fish on a barbecue teases my tastebuds as I stop for a drink at the aptly named ‘Panorama Restaurant’ where I meet up with my guide. Our rumbling tummies will have to wait though, as we have a hike across country to complete before earning our dinner. But first we wander through the village of Manolas, one of just two villages still inhabited on the island.

Many years ago the people noticed how easy it was to dig into the pumice stone that the volcano had deposited all over the island and they started digging out caves to turn into homes. There are a few derelict houses here that enable you to see more clearly how they were made. 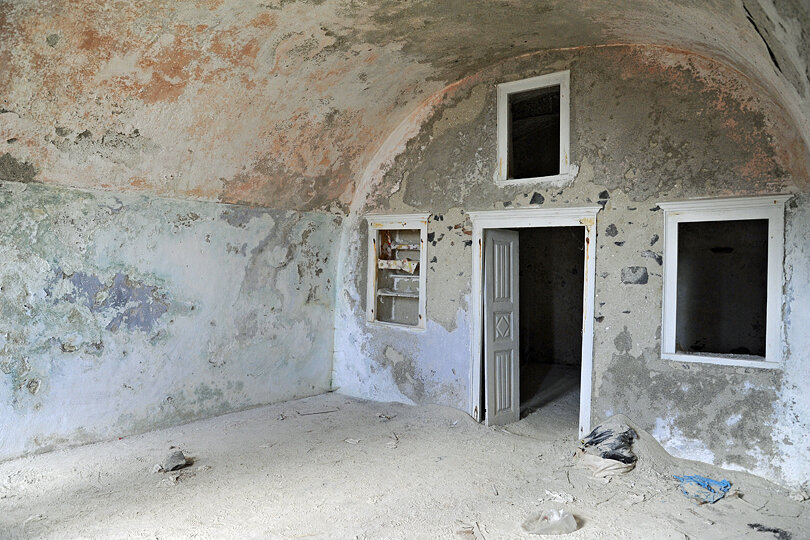 Above: a derelict cave house in Manolas, from the main living room looking back into the bedroom

Below: Kathrin, from Santorini Experts, explains how the houses were made to James, one of just two other guests on this tour 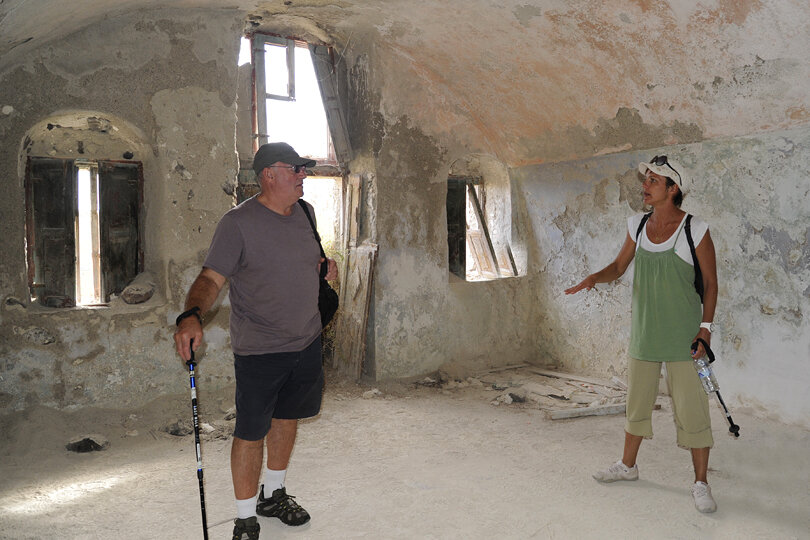 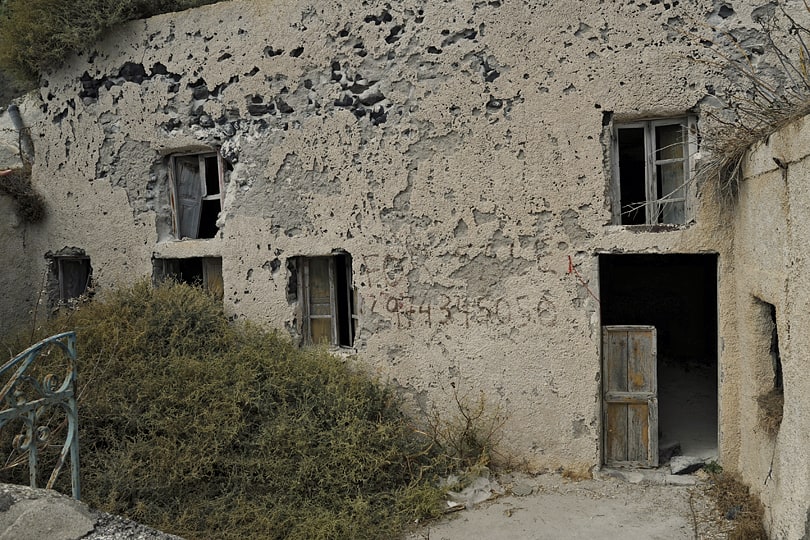 This cave house is currently for sale. With no running water or electricity, it’s on the market for a lot more than my two bedroomed flat in Sussex is worth but I don’t have this view. 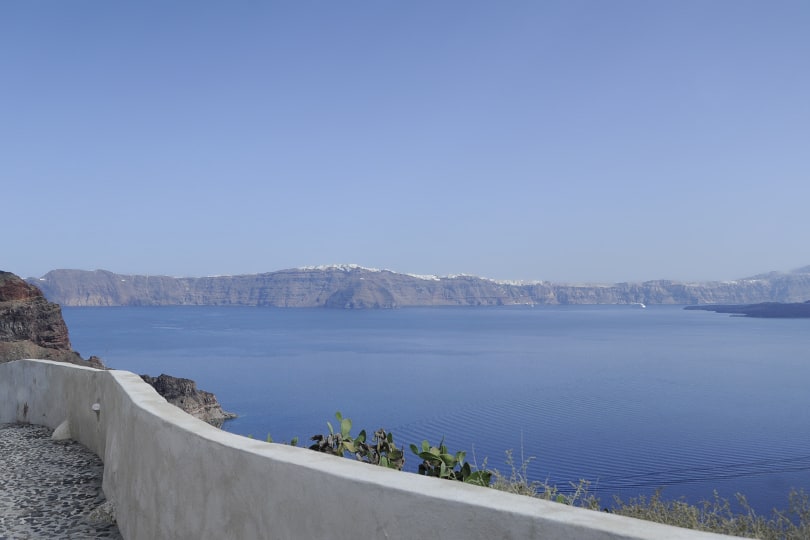 As we walk on through the village there are many more cave houses, most freshly painted, but like the one below with the paint peeling and faded, it makes a much more interesting subject for my camera. 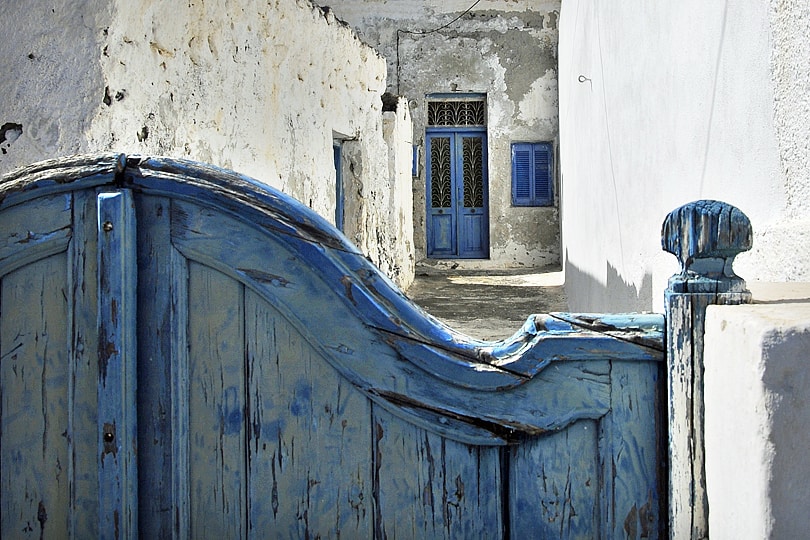 From Manolas we follow a track through the countryside. For much of the way the ground is loose underfoot and I am glad of the hiking poles that Kathrin brought for each of us. Spring, I imagine, would be an even better time to visit when the fields are greener and the wildflowers are in bloom.

On the other side of the island, the sea comes into view again. As we head on I can start to make out the shapes of caves off to our left in a small gorge. We’ve reached the hidden and now abandoned village of Akrilia.

Part 2: A Hike to the Hidden Cave village of Akrilia