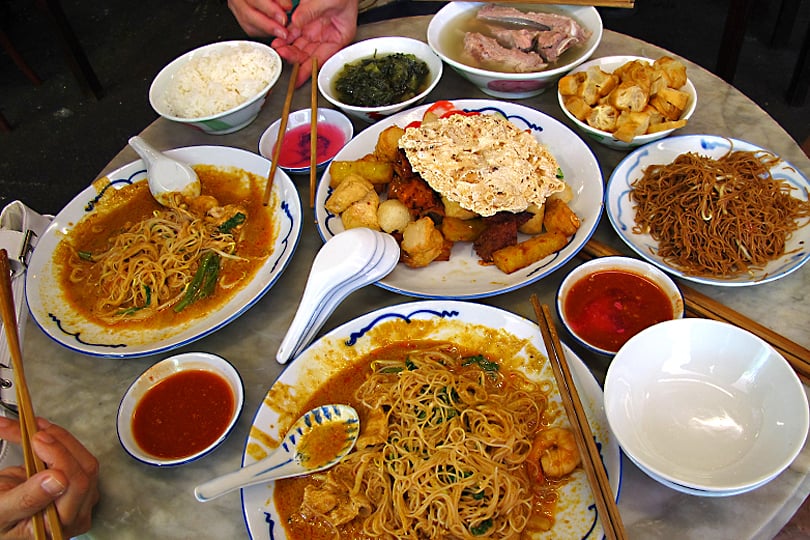 Today I’d like to introduce you to Drew, aka the Hungry Partier, who is travelling around the world in search of the tastiest food and the liveliest nightlife. He’s the author of the latest in Travel With Kat’s street food guides from around the world, next stop Singapore. Over to Drew….

Singapore is home to some of the most unique and incredible cuisine on the planet. I’ve travelled to over 45 Countries in the world, and I must admit that my stomach has never been more satisfied and impressed than it was when I was in Singapore. So just what makes it so amazing? 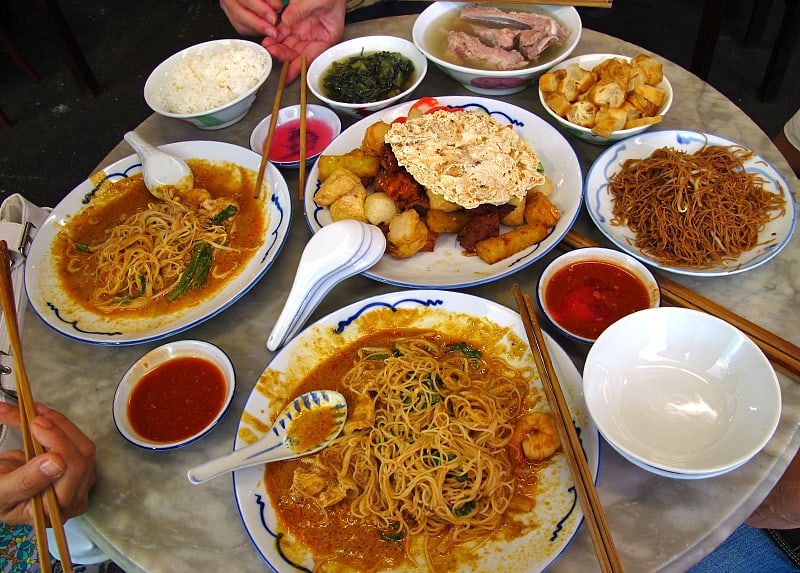 Singaporean food has been greatly influenced by its neighboring countries of Malaysia, China, Indonesia and India. This is largely due to the ethnic diversity of Singapore, which is about 75% Chinese, 13% Malay and 10% Indian with a small mix of other ethnicities.

Despite Singapore being one of the most expensive cities in the world to live in, the food is very affordable! Singapore’s hawker centres, which are giant outdoor food courts, with dozens and dozens of traditional food vendors are scattered throughout the city. Everything is very cheap and beyond tasty. It’s like heaven on earth. 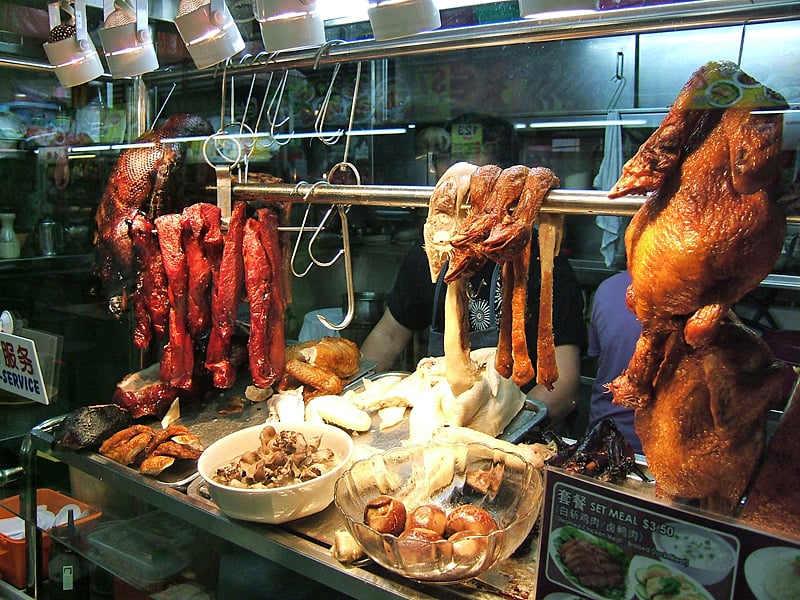 The locals love eating so much that it is actually considered a national pastime and a unifying cultural thread in Singapore.  Make sure that you get off that plane with an empty stomach, because you’ll be so full that you won’t be able to breathe on the way out. This guide about where to eat in Singapore is excellent but continue reading here if you’re after some street food…

Here are my favourite 5 street food dishes in Singapore. 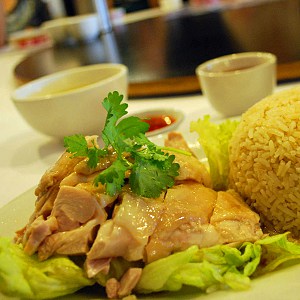 1. Hainanese Chicken Rice
This is my personal favorite street food in Singapore and the countries national dish. Not only is it one of the all-time classics, but it is one of the cheapest dishes that you can find in the city. The origins of Chicken Rice trace back to its Chinese roots, specifically prepared in Hainanese style with a unique blend of chilli, ginger, garlic and lime. I highly advise you to put some of the spicy peppers and ginger inside the rice because it is a perfect complement to the robust flavor. You can purchase Chicken Rice in hawker centres, street vendors and even luxury hotels, in other words everywhere. 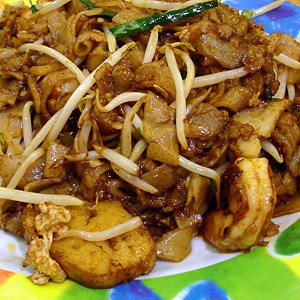 2. Char Kway Teow
Char Kway Teow is so good that I ate it every single day. It’s a national favorite among the locals and is seen on almost every street corner in Singapore. This dish is a flat rice noodle dish that is stir-fried over prawns, bean sprouts, bean sprouts, chives, sausage and eggs.  The sauce on top is the kicker, which is a light and dark soy sauce along with mixed spices. Traditionally, this dish is stir-fried in pork fat, making it somewhat unhealthy, but you won’t be able to contain yourself when this dish is on the plate in front of you. 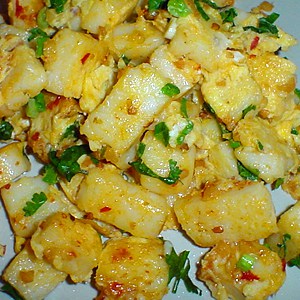 3. Carrot Cake
Carrot Cake in Singapore is not what you might imagine it to be. In fact it has nothing to do with carrots. It consists of cubes of steamed rice flour and white grated radish, fried together in an egg-like omelette, spring onions and green vegetables.  Also known as Chai Tow Kway, it’s actually much more filling than you’d expect, so don’t make a rookie mistake by ordering too many.  You can either buy it white (plain) or dark (seasoned with dark soy sauce).  Walk into any hawker centre and you’ll have no problem finding it! 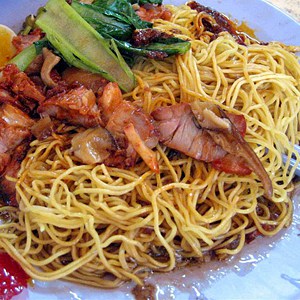 4. Wanton Mee
Wanton Mee originated as a Cantonese dish in Southern China, but has emerged as one of the most eaten dishes in Singapore.  A typical wanton mee is a noodle dish that is served in a hot broth with vegetables and wonton dumplings. People eat it with some light sweet sauce, slices of pork char and leafy vegetables. You may choose to have it spicy, or not spicy, and it usually comes with soup on the side. It’s pretty damn tasty. 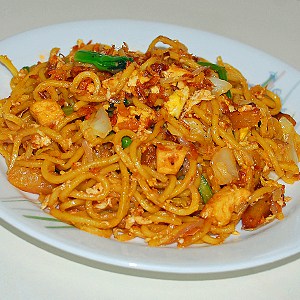 5. Mee Goreng
If you like spicy food, then you are in for a real treat with mee goreng!  This classic dish is commonly found around Indonesia and Malaysia and some other SouthEast Asian countries. It is made up of yellow noodles that are fried in cooking oil and mixed together with a large variety of ingredients such as onions, garlic, spices, chili, cabbage, tomato, eggs, pickles and some form of meat.  The most common meat is chicken, beef or prawns. It is sold by most street vendors, hawker centres and restaurants around Singapore. Your Singapore food tour isn’t complete until you’ve tried this delicious dish.

Is your mouth watering yet? Book a flight to Singapore so you can send your taste buds to heaven! 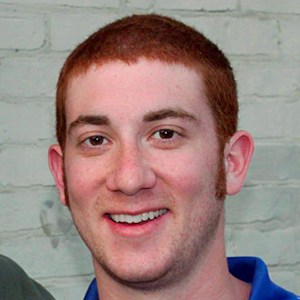 Drew is a recent college graduate who has visited over 45 countries, 43 since the beginning of 2012. His favorite things about traveling are eating local food, meeting awesome people and experiencing the nightlife scene.  Drew is currently teaching English in South Korea and he blogs about food, culture and nightlife at the Hungry Partier. Follow Drew on Facebook and Twitter.

More in Asia, Food and Drink

Things to do on a girl’s getaway to Brighton, East Sussex

There are plenty of great things to do in Brighton on a girl's getaway or day out, from strolling along...