Last month I felt I needed a bit of a boost, having just come out of a 12-year relationship feeling emotionally battered and bruised. Thinking a change of scene would do me good, I asked some friends if they fancied going to the New Forest, in the south of England, for a few days camping. I had seen a singing weekend advertised in the Baka Beyond newsletter and thought it was exactly what I needed. We had a tremendous time learning the songs of the Baka people from Cameroon. The weekend, however, went way above and beyond all our expectations.

An introduction to Baka Beyond

For those of you not familiar with the group, Baka Beyond was formed by vocalist Su Hart and her partner musician Martin Cradick in 1992.

Having seen a documentary about the Baka tribe, a group of hunter-gatherer pygmies in south-east Cameroon, they were so enchanted by their music, believed to be one of the oldest musical traditions on earth, that they set out to visit the tribe to learn more. They spent a considerable time living with the tribe in the rainforest, recording their music and have returned many times since for over 20 years. 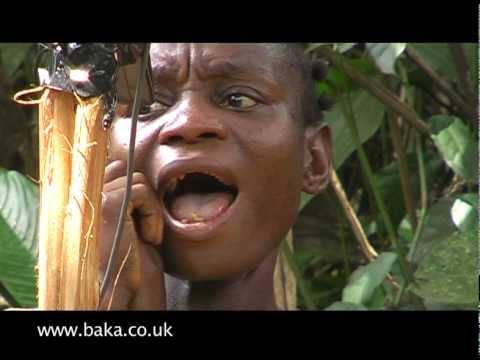 After being initiated into the Baka music, Su and Martin were asked to take it beyond the forest. Once back home, they founded the group Baka Beyond playing music that was a fusion of Celtic and western-style influences and traditional Baka music.

In Cameroon, the semi-nomadic Baka people were always looked down upon because of their unconventional lifestyle. Much of the profits from Baka Beyond’s music has been used to improve the health care and education of the tribe. It has even enabled them to obtain national ID cards, previously denied them, giving them basic rights and official recognition as citizens of Cameroon.

A weekend singing songs of the Baka people

Our weekend in the New Forest would be spent learning the songs of the Baka pygmies and their neighbours, the Mbendjele pygmies from the Congo. The highlight of the weekend was the new moon celebration known as Malobe. This would be led by Jerome* and Ingrid Lewis, who have spent three years living with the Mbendjele and had been initiated into the Malobe ceremony and given permission to hold it here in England.

Throughout the weekend, Jerome, Ingrid, Sue and Martin all shared fascinating insights into aspects of the lives of these two tribes, their traditions, music and struggles of everyday life.

The Mbwndjele and the Baka people use singing as part of their everyday lives, for rituals and to bond the community together as well as just for fun. When the Baka men go out hunting, the women first sing to the forest to enchant the animals, thus ensuring that the hunt is a success.

The singing, percussion and guitar workshops were all great fun and by Saturday evening we were all eagerly awaiting the Malobe that night although a little uncertain what to expect.

After a shared meal, we spent the evening singing around the fire and then walked into the forest. We were led to a clearing where we laid down rugs and blankets, sat down and huddled close together in the dark. It is important that the ceremony be held in total darkness, hence it being timed with the new moon. Everyone must be touching their neighbours, so we snuggled up even closer together uncertain of who was who! Once we’d settled down I had no idea who I was sitting next to, we were deep in the forest in complete darkness.

It’s hard to explain the wonder of that night as the lead singers controlled the group, slowly building the intensity and emotions – stopping – building it up again. Only to stop and then build it up once more.

…and then the forest awoke – a really magical moment that I’ll never forget (but I’ll say no more on that, as we were asked not to!).

Above: me on the left with my friend Sue.

On Sunday… more singing, then lunch, followed by a bit more singing. We said our goodbyes and went our separate ways, every one of us singing all the way home with memories of a very special weekend.

I felt rejuvenated and ready to face the world anew, although having spent just a few short days in the forest, I was taken by surprise at how odd it felt to be back amongst buildings. It even felt a little oppressive and I longed to be back in the countryside amongst the trees.

The songs of the Baka remained with me in the form of a number of CDs. If ever I feel a little sad, I turn the lights down low, listen to the Baka singing and feel at peace. 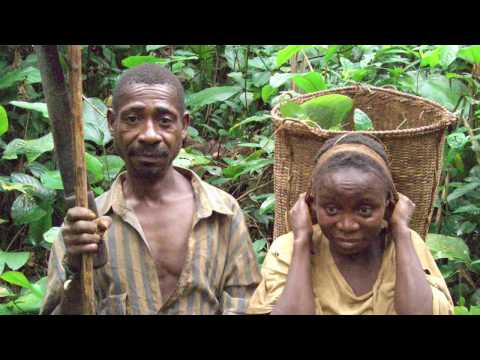 The following year we returned to the camp, this time in a forest in Gloucester and enjoyed another wonderfully uplifting weekend. Sadly, one of my friends was feeling unwell when we went into the forest for the Malobe and stayed behind in the clearing where we had camped. As she sat alone by our tents, she could hear us singing and listened mesmerised, not only by our voices but the birds that joined in. The forest did indeed awake and, much like a Mexican wave passes around a stadium, the bird song rippled around the forest that encircled our campsite, again and again. How spellbinding that must have been.

More recently I joined the London Rainforest Choir led by Su and Martin and we sang in the rainforest biome of the Eden Project in Cornwall but that’s another story.

All my favourite Baka and Baka Beyond CDs are available from Amazon but the one below is my personal favourite recording of the Baka women singing.