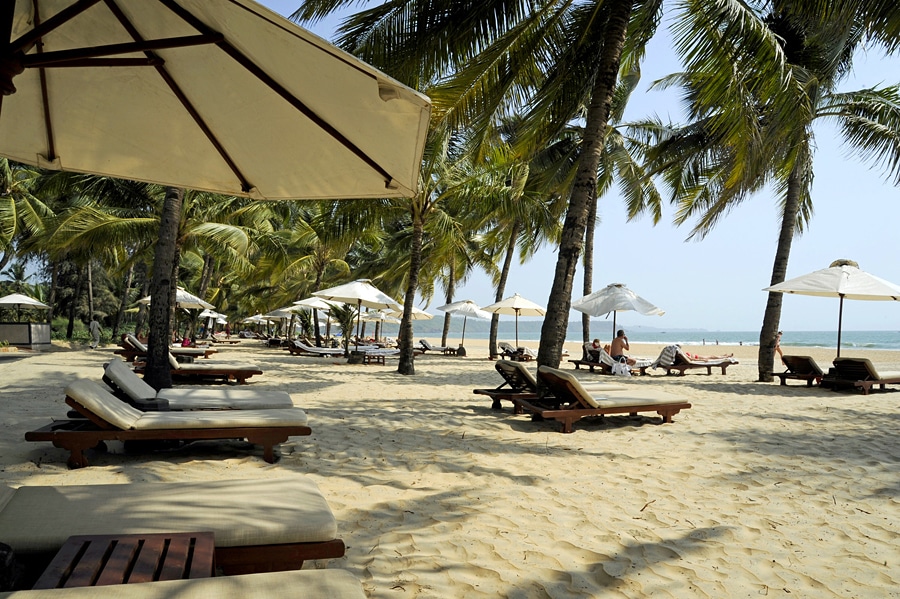 Winding our way through the narrow lanes of South Goa, flanked by coconut palms and dotted with brightly painted houses, I can’t believe I’m finally back in India. But this isn’t the India I remember. It bears no resemblance to chaotic, charismatic Rajasthan. There are no tea plantations or sleepy canal ways like the backwaters of Kerala. The ladies do not have jasmine flowers hanging from their hair as they do in Tamil Nadu. However, one similarity to Kerala is immediately apparent. It is green. So very green, despite the fact that I’m visiting in April towards the end of the dry season. Lush greenery and coconut palm after coconut palm stretch out before me leading down to the stunning South Goa beaches. 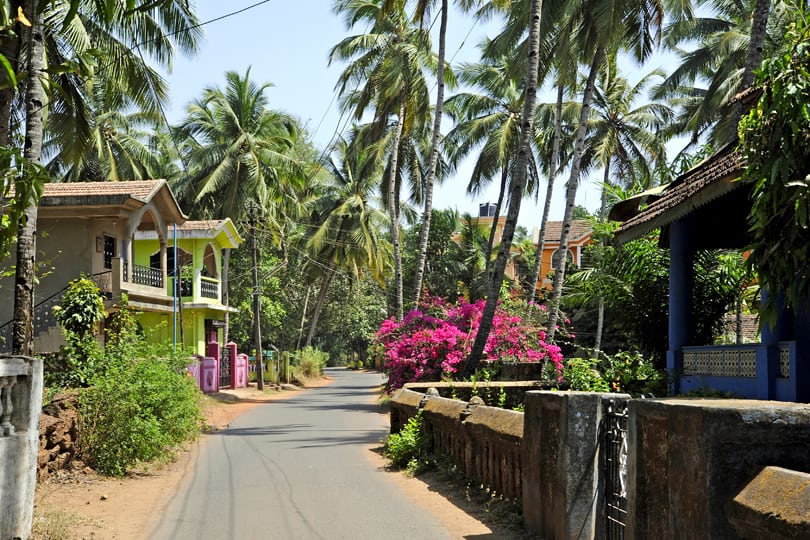 The beaches of South Goa are stunning – mile after mile of soft, pale sand backed by palm trees. You’ll find a map of all the best beaches below, but first I’d like to share with you a few of my favourite South Goa beaches. 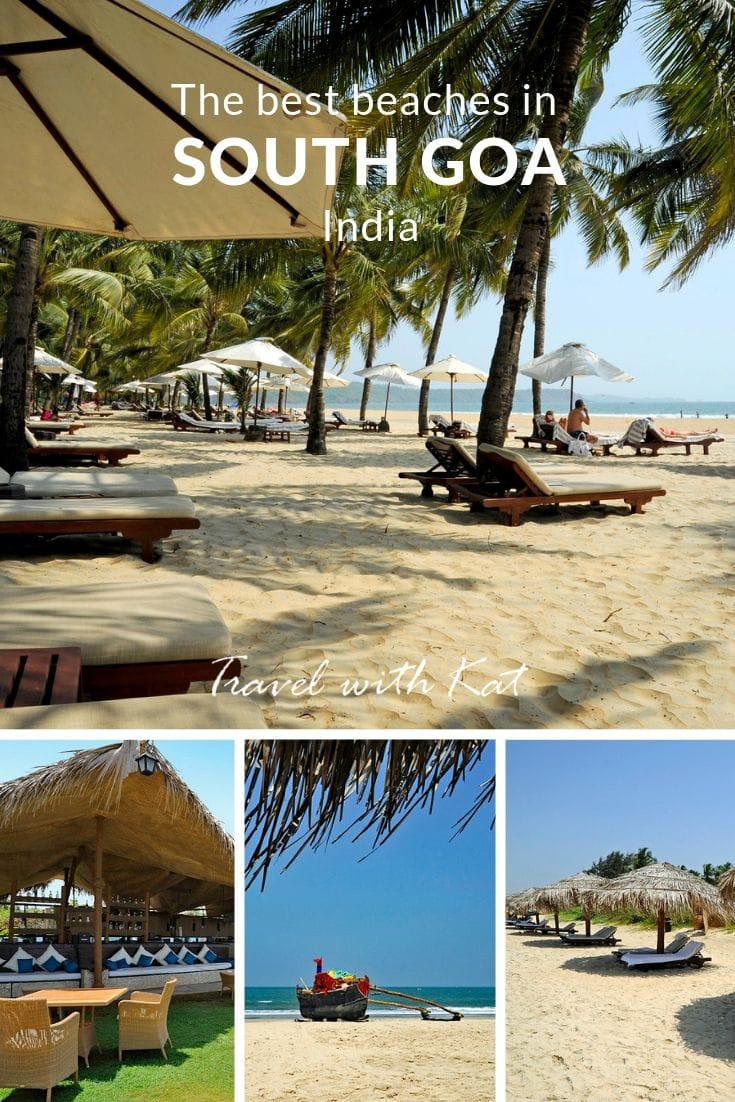 First stop, Zeebop, the most famous beach shack in Goa

Peeping out from between the palm trees, on a glorious stretch of sandy beach, the most famous beach shack in Goa, Zeebop beckons me for a spot of lunch. It’s on Utorda Beach, which just so happens to be on the way from the airport to our hotel.

Goa is said to have some of the best beaches in India, and the quieter, idyllic white sand beaches are found in the south. If this is anything to go by, I don’t doubt it. And dotted along these lovely beaches you’ll find many of these colourful, make-shift restaurants. Rickety chairs, good food and great prices abound.

The seafood at Zeebop is superb, and I try for the first time the refreshing drink, ‘lime soda sweet and salty’, a dehydration buster if ever there was one. 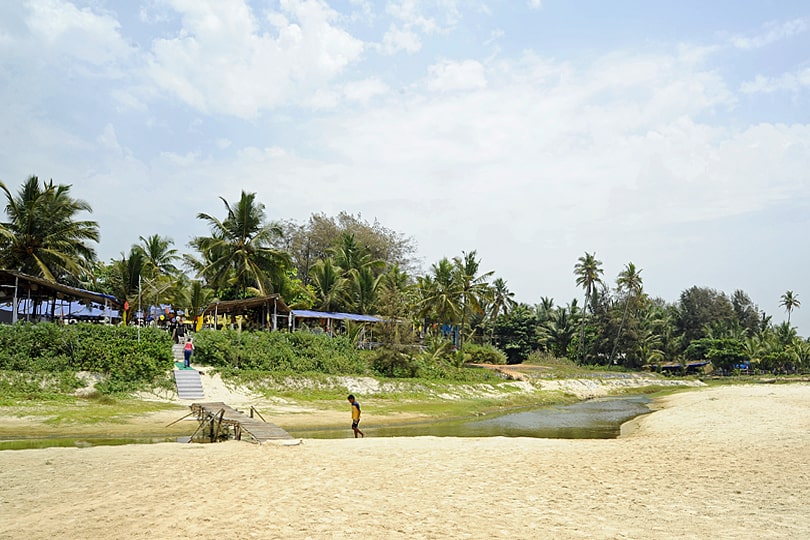 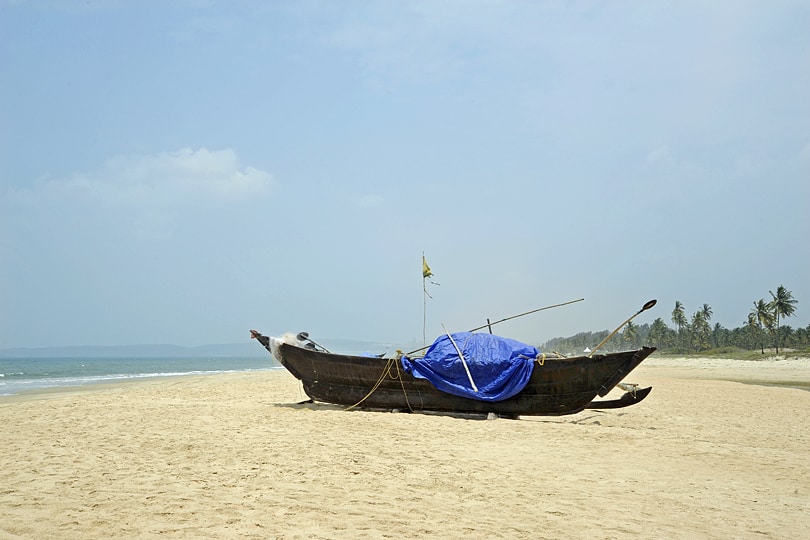 Fabulous seafood, great company and a long stretch of pale sand looking out over the Arabian Sea. What better way to start my Goan adventure?

Our hotel, the Acacia Palms, looks out through the palm trees, across the dunes to Colva Beach. I love the Goan-Portuguese style architecture and while the pool is small its a blessing to cool down in. I like the rooms too, which were relatively simple but comfortable with dark, carved wooden furniture reminiscent of colonial times. 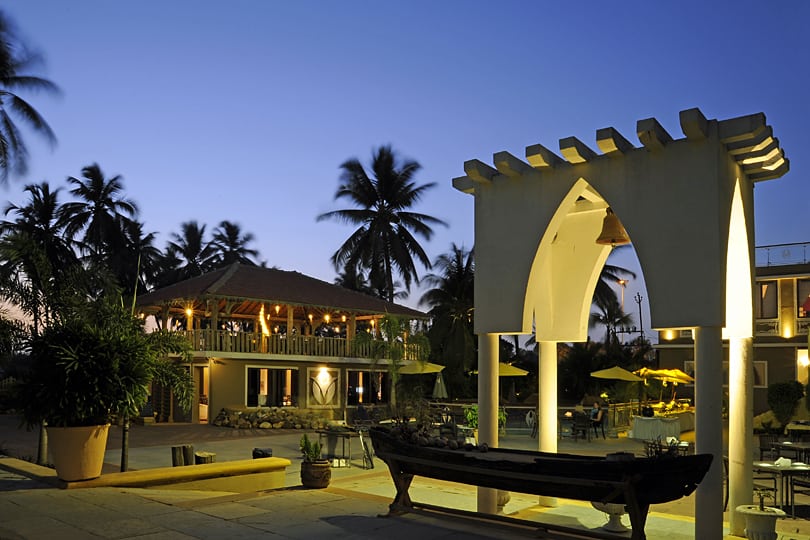 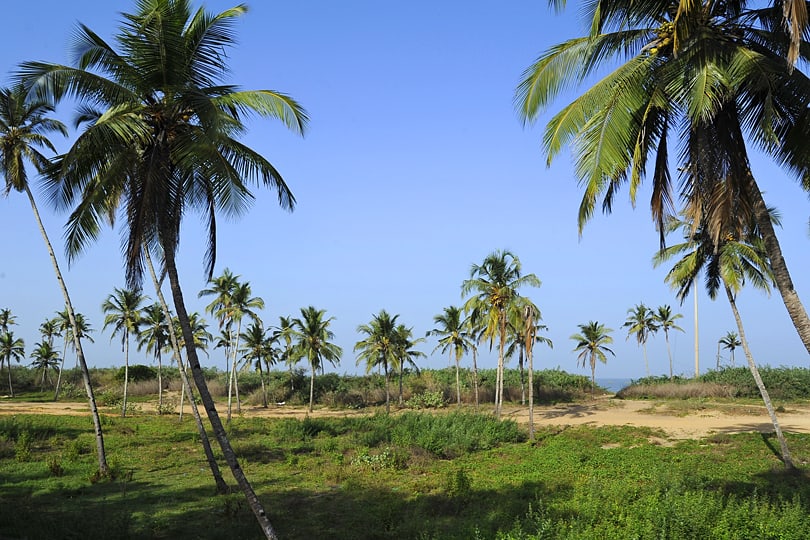 The view from the Acacia Palms

On our first morning, I wake early and take a stroll in the sunshine. It’s humid and beads of sweat form on my brow despite the early hour. It’s just 7.30am, and the beach is already relatively busy with locals cooling off in the shallows, enjoying the healing benefits of the sea at the start of the day.

Colva is the liveliest resort in southern Goa which in general is a very sleepy, laid back place. The beach here was the only one in this part of the state that I saw even vaguely busy. At this time of year, many Indians are on holiday, and it was great to be able to join them enjoying the seaside and sunshine. 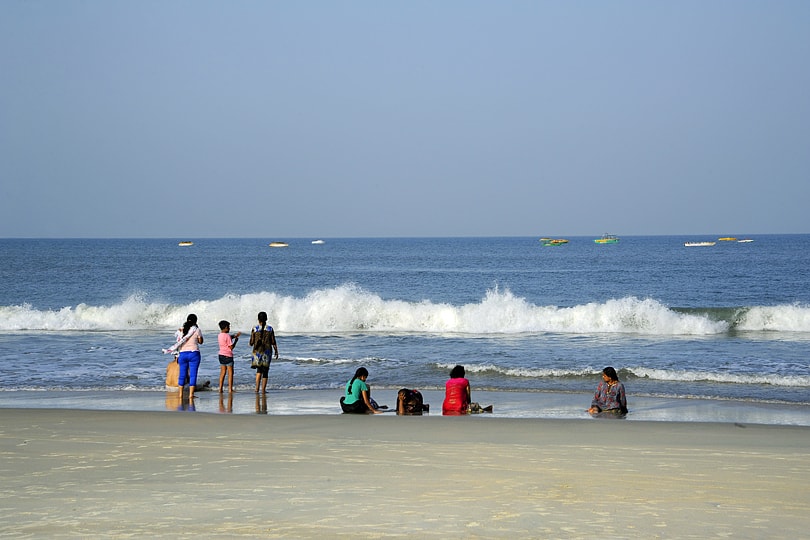 Colva Beach, early in the morning

That evening, I head to back Colva Beach with my travel companions, Becky, Annabel and Natalie, in search of a pre-dinner drink.

A long row of tables from the beach shacks spreads out in either direction. Sitting with our toes in the cooling sands, we sip the local brew, Kingfisher beer, by candlelight and listen to the waves. It’s one of those idyllic moments that you never want to end.

Where to eat in Colva

However, our tummies are rumbling, and there’s a particular restaurant we want to check out, The Garden on Colva Beach Road, the main road in Colva leading down to the beach. We easily find it and before we know it a tantalising array of Indian dishes is spread out before us. I try the spicy pork Goan sausages to start with. Followed by Chicken Xacuti, a traditional local curry with poppy seeds, red chillies and coconut. Washed down with a large glass of Kingfisher beer. We all tuck into each other’s dishes together with some rice and naan bread. I love every dish, and we each eat way more than we should but still can’t finish everything. This is one of the best meals I have eaten in a long, long time. And when they bring the bill, we can’t quite believe it is around 500 rupees each, that’s little more than £5. But that’s fairly typical of the prices here.

Goa is well known for its delicious cuisine, and I now know why. It’s some of the tastiest food I’ve ever eaten. Everywhere we went, the food was good, but this particular meal stood out above the rest. So if you ever find yourself in Colva, remember that name, The Garden, I couldn’t recommend it more highly.

Next door to Colva Beach you’ll find the quieter Benaulim Beach with a few beach shacks and one luxury hotel, the Taj Exotica. It does tend to get busy at weekends, but during the week it’s a peaceful retreat. 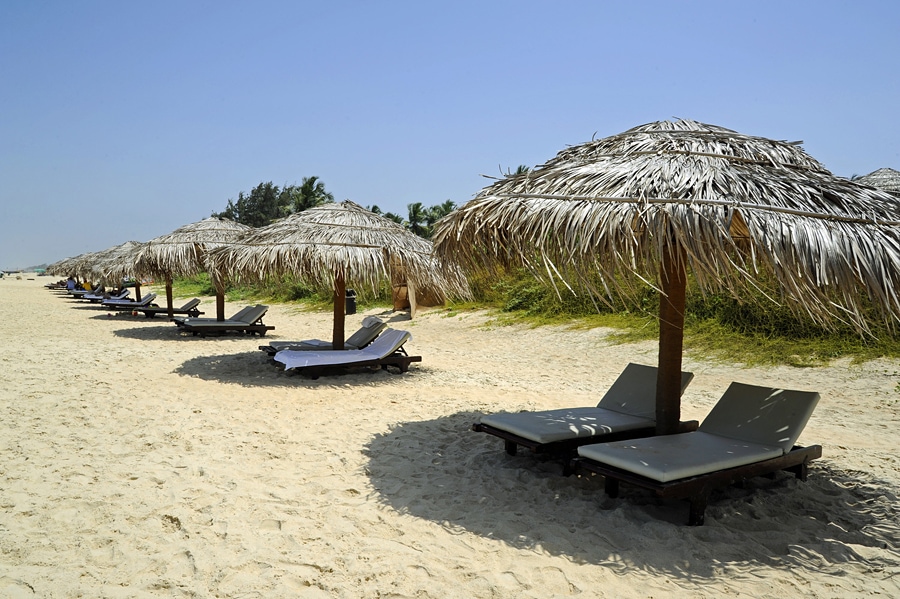 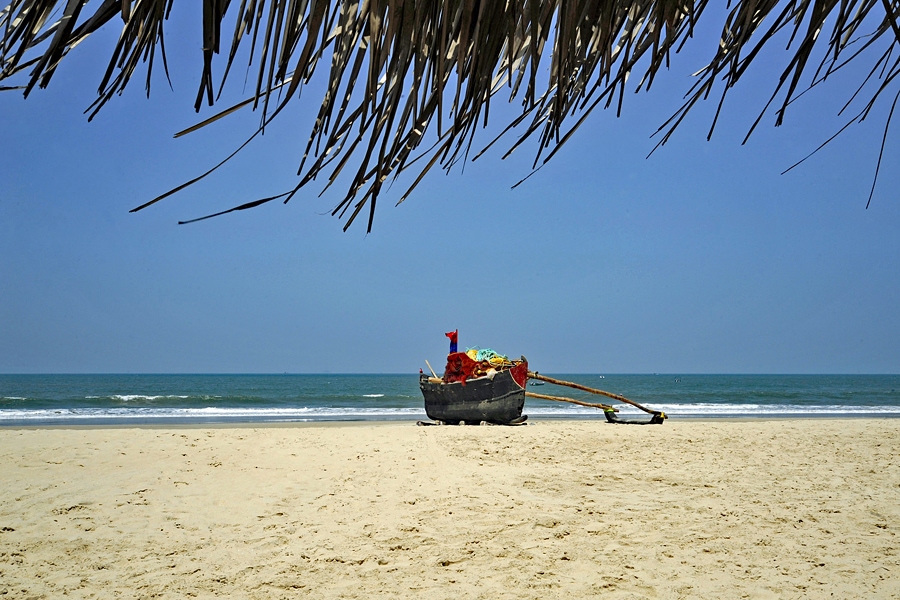 For a more upmarket beach shack experience book a table at Lobster Village overlooking the sands by the Taj Exotica. 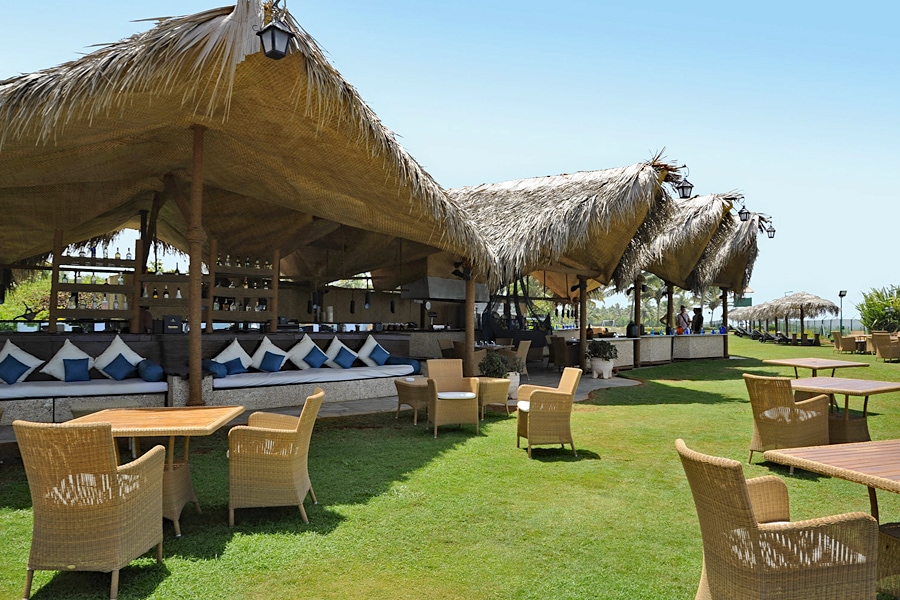 Heading south, the soft white sand of Mobor Beach is lined with luxury hotels including Holiday Inn Resort Goa and my favourite of all, La Leela. It’s the perfect place to escape if you are after a bit of pampering in a peaceful setting. 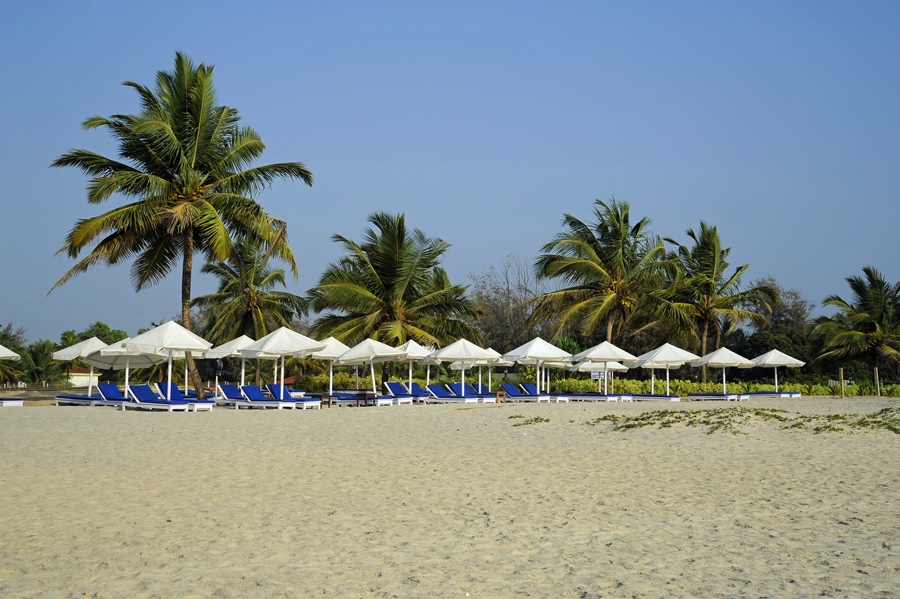 Above: the beach at Holiday Inn Resort Goa and below, La Leela.

Where to eat in Mobor

The nearby Fisherman’s Wharf restaurant on the banks of the Sal River is a must. It’s well known for its fresh fish and seafood, and it’s in a beautiful setting. Also on the river the Italian restaurant, Riverside, is part of the La Leela hotel and is reputedly the finest Italian restaurant in Goa. I haven’t eaten here, but I did visit, and the setting is lovely. 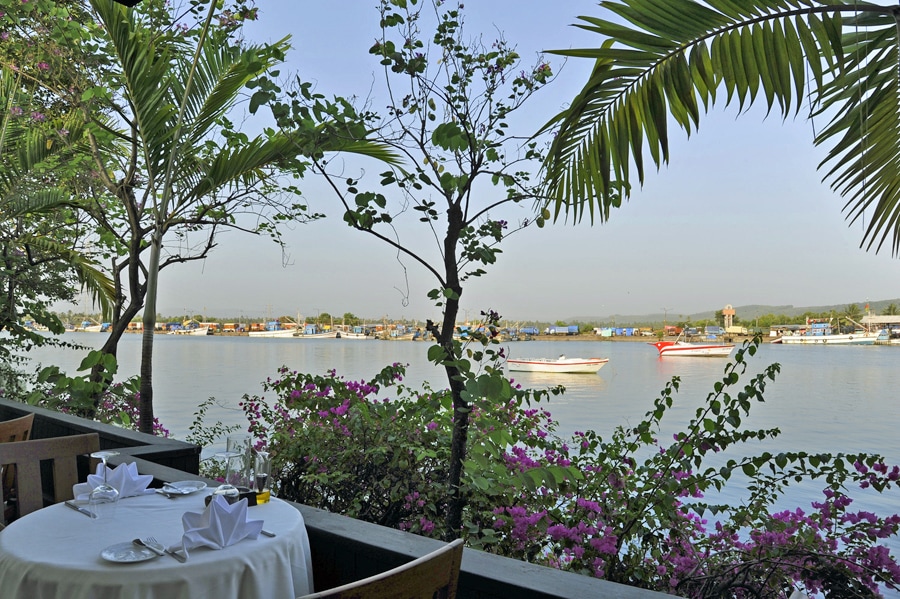 Getting to know Southern Goa

Goa is the smallest state in India and also the richest with virtually no obvious signs of poverty as far as we could see. Unlike other parts of India that I’ve been to, we didn’t see any beggars or hustlers. If you’ve not been to India before, Goa would be the perfect introduction. 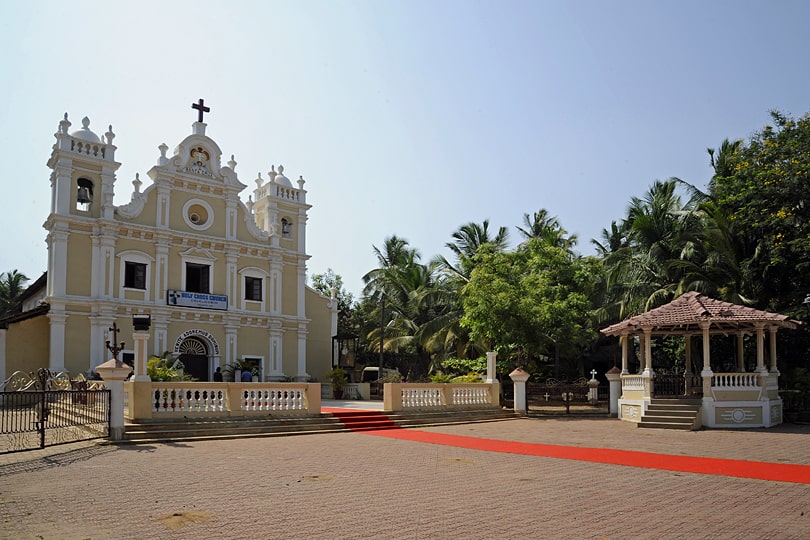 Around 65% of the population in Goa are Hindu and 30% Christian with the remainder being Muslim, Sikh or another religion. The Portuguese brought Christianity here when they governed the state, even while the rest of India was controlled by the British. This influence has enhanced Goa’s uniqueness and is particularly noticeable to this day in both the Goan architecture and the cuisine. 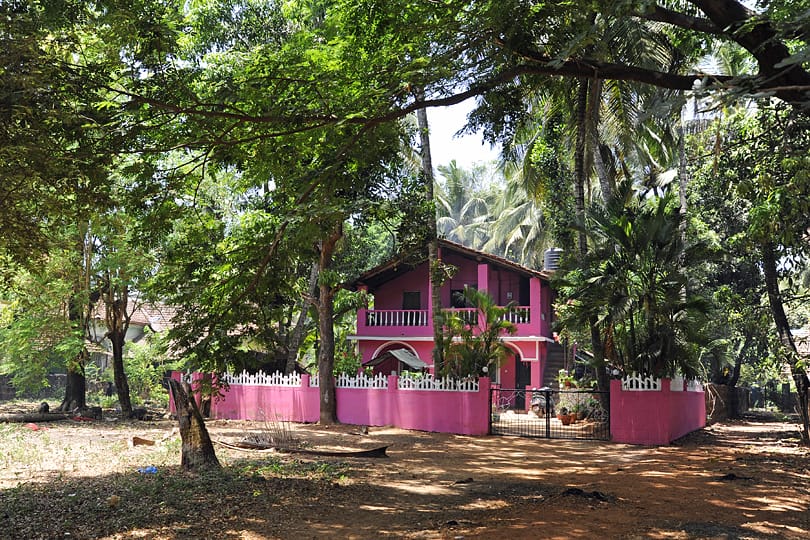 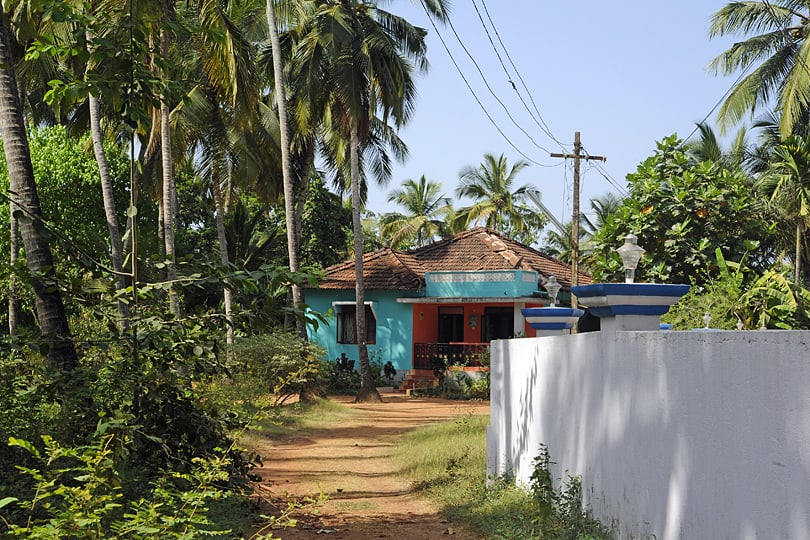 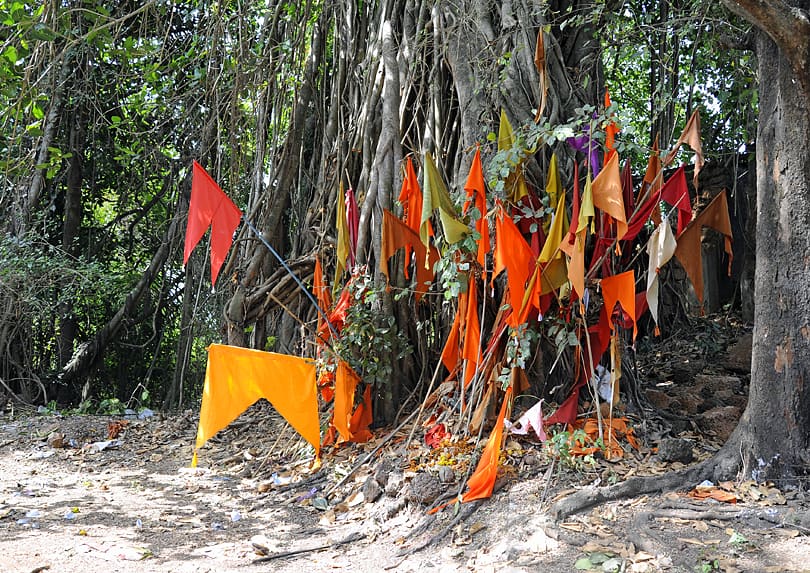 From the Hindu flags at the foot of a banyan tree to the colourful fruit and vegetable stalls to the golden rice fields, the colours of India are everywhere you turn. 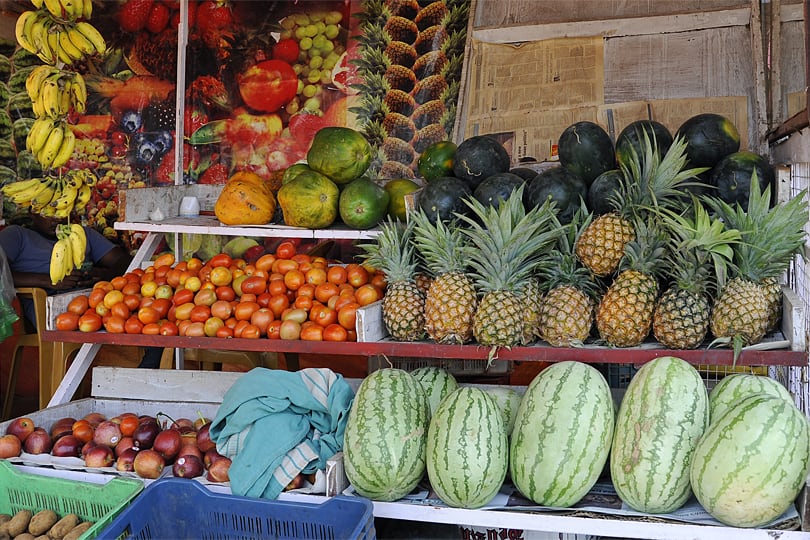 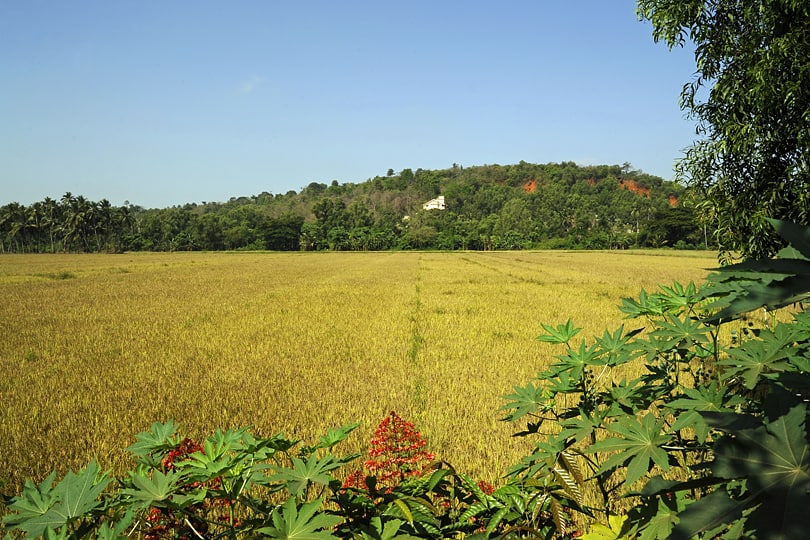 Planning a trip to Goa? World Nomads offers travel insurance for residents from over 130 countries and is particularly suitable for long term travellers and single trip holidays. Travelling without insurance is just not worth the risk.

Disclaimer: I visited Goa while working for The Goa Experience, part of the Serenity Holidays Group.

Portraits from Goa, Colour versus Black and White

A collection of black and white portraits from my recent visit to Goa in India.