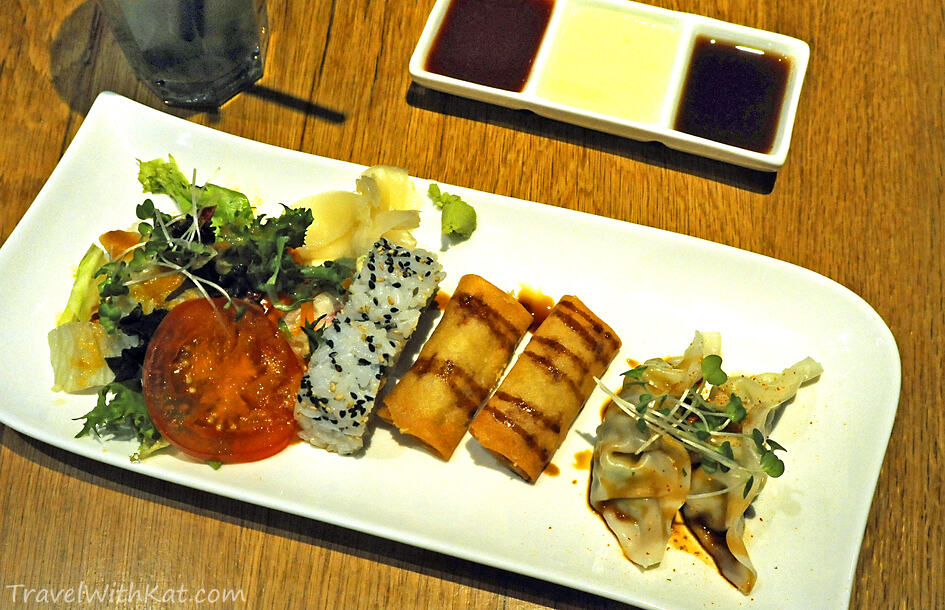 Last weekend I had a really wonderful night out at SEN NIN – Japanese Teppanyaki & Sushi Restaurant in Camden, London.

For someone who loves Chinese, Thai, Indian, Italian, West African… in fact every type of food imaginable and who writes about cuisines from around the world it really is surprising that I have never tried Japanese food before. When I saw an offer on Living Social for a meal at a Teppanyaki Japanese restaurant I thought it was too good an opportunity to miss and now that I have tried it, I want MORE!

The concept of teppanyaki was created by Hiroaki “Rocky” Aoki (a former wrestler) in New York in 1964 when he came up with the wonderful idea for making meals a theatrically experience with a knife-spinning, joke-telling chef at a teppanyaki table – a steel grill surrounded on three sides by a wooden table for the guests. At first his restaurant, Benihana of Tokyo, struggled but following a rave review by Clementine Paddleford of the New York Herald Tribune the restaurant took off and soon it was enjoying the patronage of celebrities such as The Beatles and Muhammad Ali. 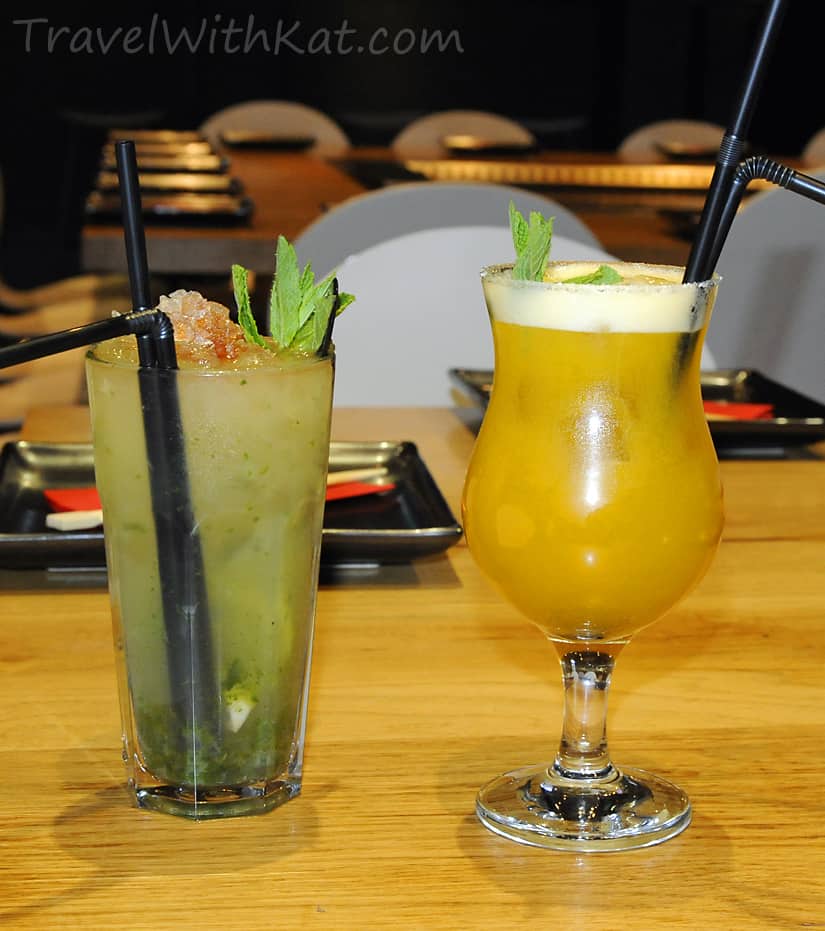 Ferdie was our chef at the Camden branch last weekend and I had the chance for a quick chat before our meal.

Ferdie studied cookery in his homeland in the Philippines and had since gained 9 years experience of working in Japanese restaurants in Malaysia, Bahrain, Liverpool and London. Sen Nin menu is very much based on authentic traditional cooking with the occasional modern twist. Ferdie described Japanese food as a simple cuisine using “very fresh ingredients, that is the Japanese way.” Although teppenyaki is not found in Japan, in fact it would be considered disrespectful, Ferdie really enjoys the performance and “making people happy”.

We started with a Japanese cocktail, mine being a rather sour but refreshing Lychee Mojito while Neill enjoyed the sweeter but equally delicious Plum Mango Margarita.

Our meal began with miso soup (watercress, spring onion, seaweed, tofu and fish stock) followed by a tasty platter of sushi, spring rolls and dumplings, wasabi and some seriously delicious pickled ginger. Be warned be cautious of the wasabi, a Japanese root vegetable, related to horseradish that packs a serious punch! There were also a selection of sauces including soy sauce which our host suggested we add a little wasabi to, to liven it up. 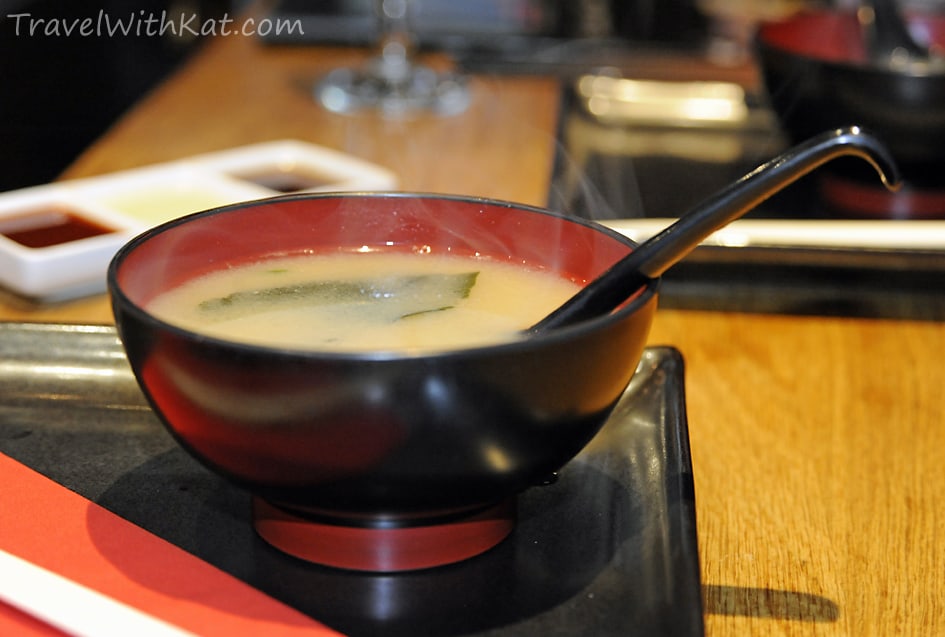 Then in came Ferdie. After a wonderful display of knife twirling, juggling and cheeky banter he skillfully prepared the Hibachi Japanese rice (otherwise known as ‘funky rice’ made with baby oil and coca-cola, apparently, or do you think someone might have been pulling my leg!). After numerous tricks performed by Ferdie, we found out it was now our turn as we each tried to catch some cooked egg in our mouths. Predictably this didn’t go very well but we had fun trying! 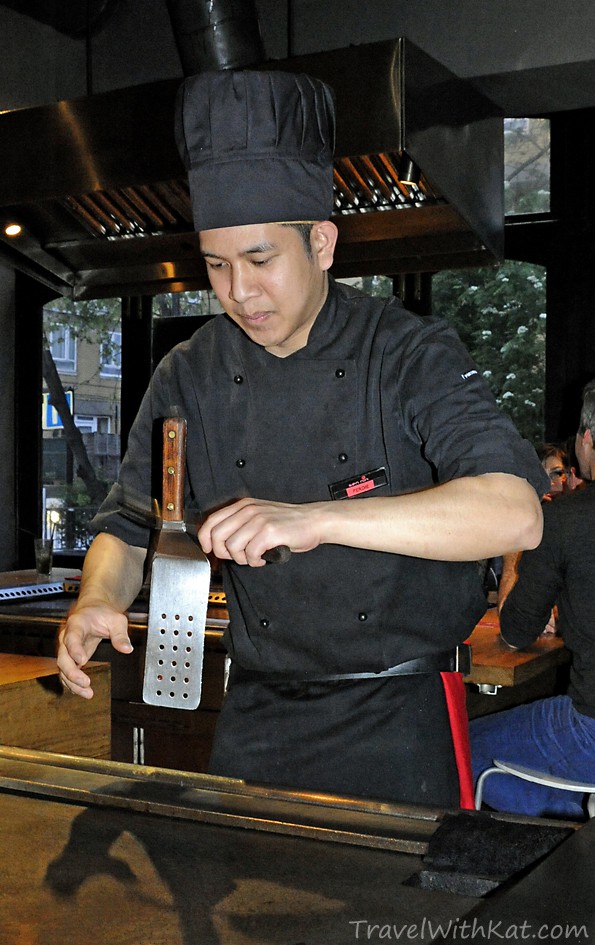 For their main course, each couple had the choice of three out of six dishes and we selected steak, chicken and the catch of the day, coley. Served with funky rice, stir-fried vegetables and flavoured with teriyaki sauce it really was a treat. The meat was tender and moist; the steak in particular, which we had rare, was superb and although by now I was seriously full it was hard to stop eating such a delicious meal washed down with a refreshing Japanese beer. 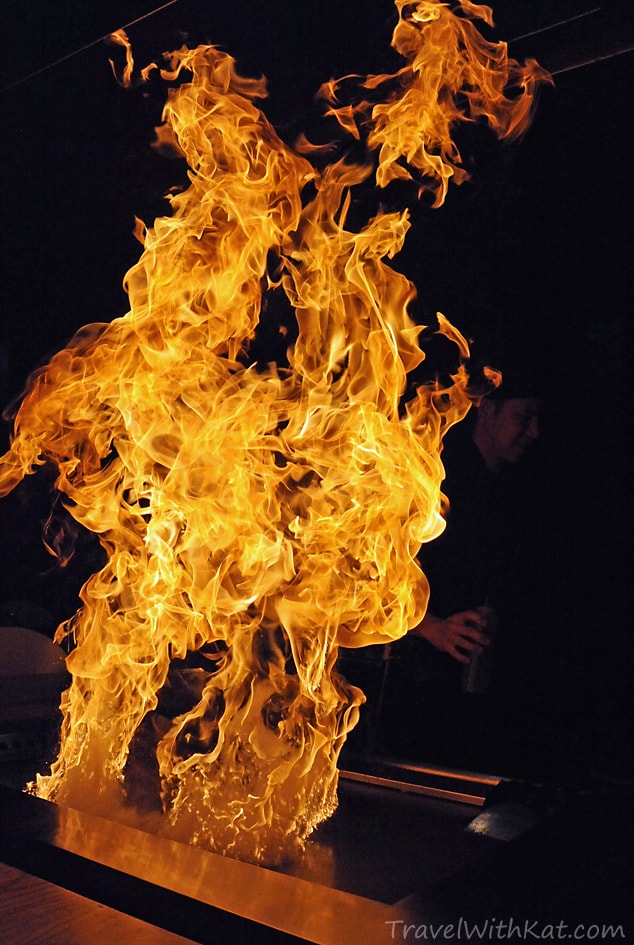 The only disappoint of the whole evening was that our set meal did not include a Japanese dessert. Other than that it really was a perfect meal out.

As we finished our New York cheesecake we were offered a complimentary green tea which, despite the fact that I have never liked tea in any shape or form or from any country where I have tried it before, this really hit the spot in a most refreshing way. We left Sen Nin feeling very full and very happy thanks to Ferdie and all the staff.

Full details of the menu can be found on the restaurant’s website starting from just £6.50 for a lunchtime main course or £6.95pp for a Bento Box (available from 12 noon to 5pm) to £52 per person for the Wagyu Beef Meal. We had the Imperial Teppanyaki Meal normally costing £48.95 per person. You might want to keep in mind that we both found this set meal impossible to finish and there are a number of much more reasonably priced options with fewer courses!

I’m looking forward to visiting again sometime and it definitely won’t be long before I try some more Japanese food whether here, in another restaurant or perhaps I should try cooking some at home. I really did love it!

This image was taken in Corsica and the lovely village of Agajola. I've visited several times and stayed there for...