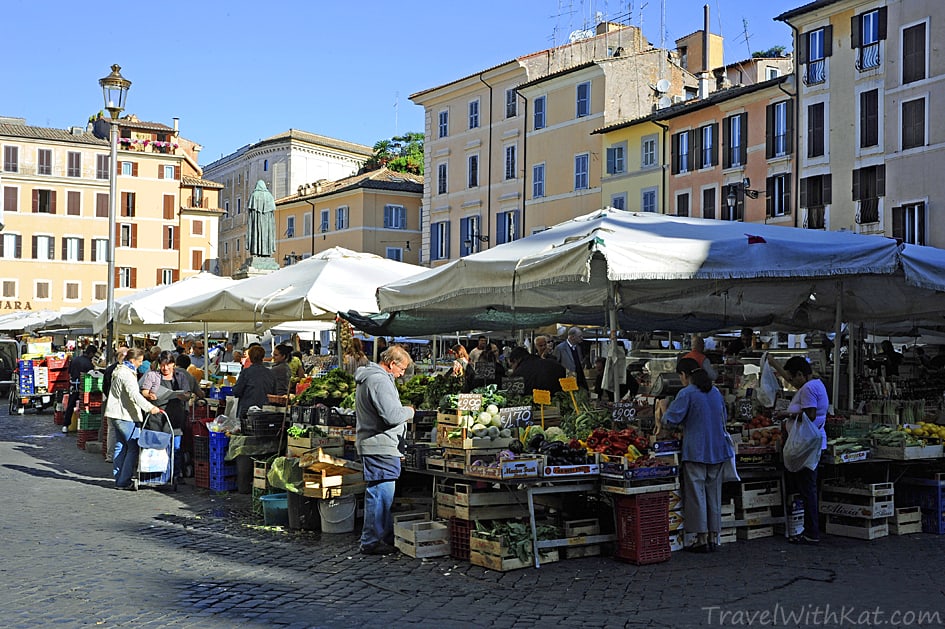 From aphrodisiac salami to 50-year-old balsamic vinegar, exploring the Campo de Fiori farmers’ market is one of my favourite, things to do in Rome. A visit here is included in this fabulous Rome food tour with my favourite Rome walking tour specialists, Walks of Italy.

My tour with Walks of Italy was complimentary for review purposes but as always I retained the right to publish my own honest opinions of this tour. Please note, this post contains affiliate links which means that if you click on a link I may make a small commission at no cost to you. Find out more about affiliate links in my disclaimer.

During my stay in Rome, I joined a number of tours with Walks of Italy and they were all excellent.  My guide was an extremely knowledgable, friendly and funny local. I can particularly recommend the following tours, however, the food tour, in particular, was superb, the best food walking tour I’ve ever been on and I’ve been on a few!

After two days of overcast, rainy weather I woke up to a beautiful, sunny Saturday morning in Rome. I was relieved the rain had vanished as today I’d be joining Walks of Italy’s Rome Food Tour with Pizza-Making, Trattoria Tastings & Gelato (a big part of which happened outside) and if it was half as good as the Wine and Food Tasting I did yesterday with Vino Roma it would be brilliant!

Update: I took this walking tour some time ago now and the exact locations of the stops may have changed, we didn’t taste any gelato that day for example. However, the quality of the tour will remain exceptional. 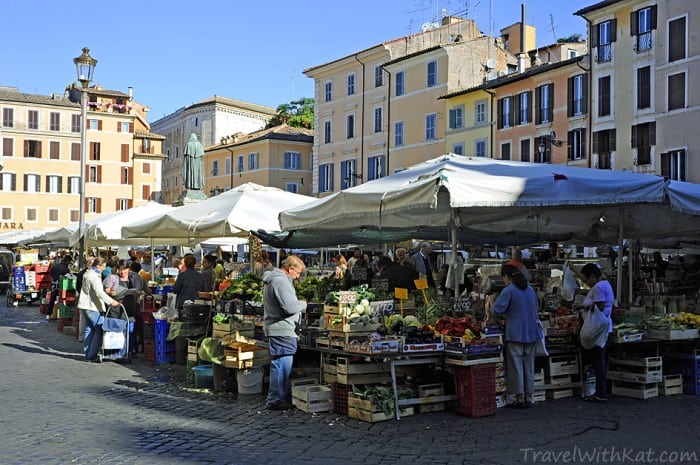 We were to meet at Campo de Fiori market at 10 am. The instructions I had printed off from Walks of Italy’s website were spot on, as well as a map they even included a photograph of the meeting point. I arrived a little early and made use of the time to take some photographs of the market before the tour started. 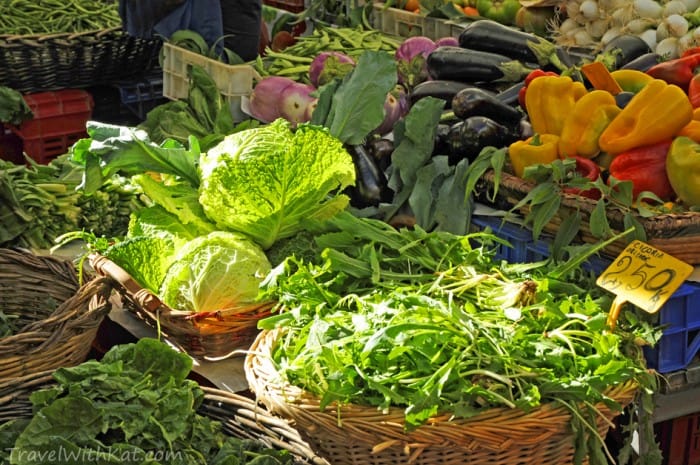 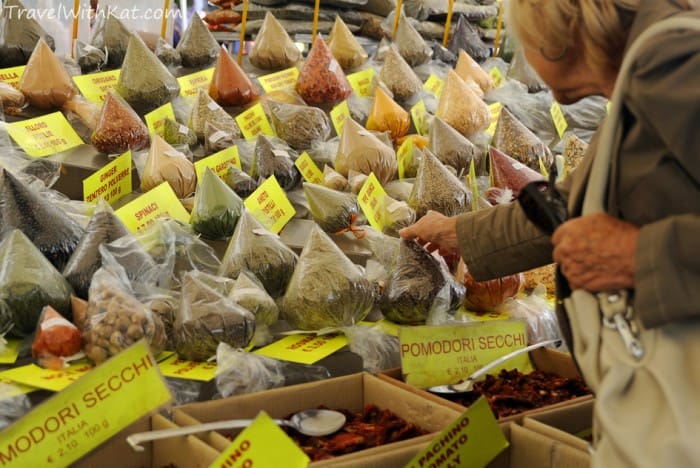 Just before ten, I met Simona, our guide, plus my companions for the tour, some really lovely American ladies. They were touring Europe to celebrate one of their 70th birthdays – 4 sisters, 2 daughters and a granddaughter – 7 in all! They were the perfect partners in crime for what turned out to be a memorable day, going above and beyond my expectations.

Looking around the colourful stalls there were huge varieties of fruits and vegetables including numerous types of tomatoes, peaches and apples. Simona pointed out the mela cotogna apple which is perfect for making jam (and often seen depicted in ancient paintings). Standing in the centre of the market the smell was delicious, in fact, all your senses could enjoy the colours, hubbub and tastes of the market. 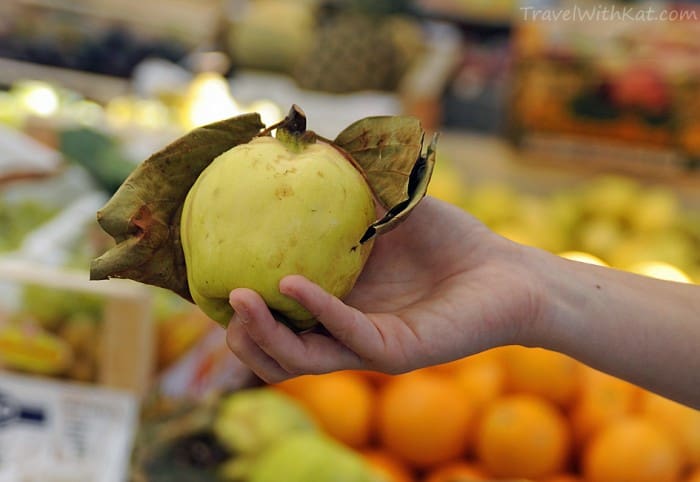 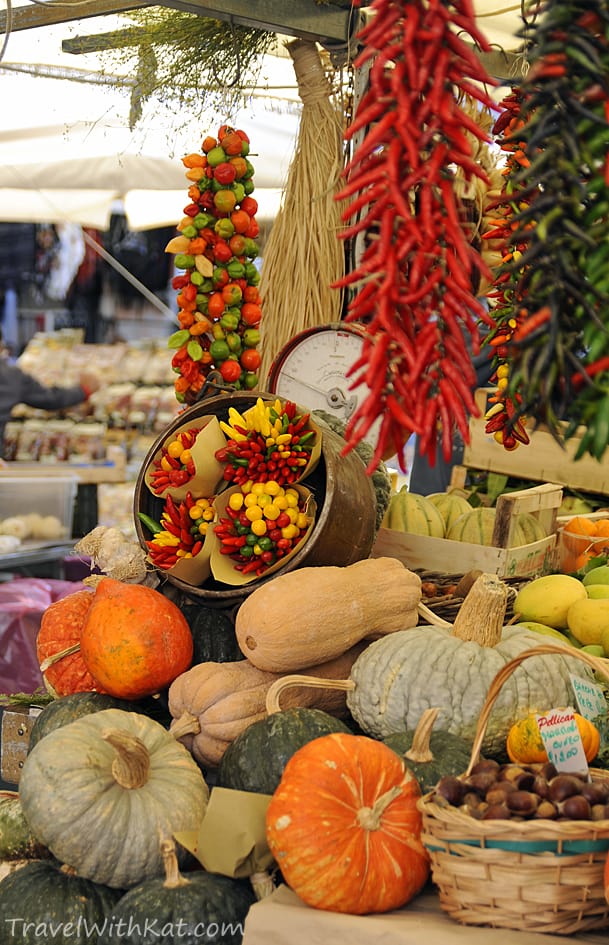 As the charming Simona explained, this is the oldest functioning market in Rome, open every day except Sundays from about 7 am to 2 pm. Every neighbourhood has its own market and unlike here in England where we tend to buy large amounts of food in one go Italians shop daily buying fresh, local, seasonal produce. Even busy working mums will do this. Whereas I might buy from the supermarket, as part of my weekly shop, a bag of salad prepared in a factory (with a use by date stamped on it) Simona buys daily, a mixed salad called zuppa, which is washed and prepared throughout the morning at the stall where it is sold or puntarelle, a type of chicory that you can also buy freshly prepared. I know which I’d prefer to do!

Typically Italians also buy on a daily basis fresh pasta (dried is rarely used) and of course bread, which brings me to our next stop, Antico Forno Marco Roscioli, a fabulous bakery on Via dei Chiavari, just a very short walk from the market. As well as a vast array of breads and other sweet and savoury baked goods they have a renowned pizza counter. Pizza bianca (a type of pizza that comes without any toppings, not even tomato) is very popular locally and is eaten on its own or sliced through the middle with a filling, such as prosciutto, to form a sandwich. It really is delicious and makes a perfect lunchtime snack.

Just around the corner in Via dei Giubbonari you will find the equally renowned Roscioli restaurant and delicatessen. I had been there the night before as it had been recommended to me by a few different people. It is reputed to have the best carbonara in Rome. This is probably the most well-known Roman dish and dates back to the time of the empire so a must on my Roman food explorations! And delicious it was too. This morning, however, we were offered a wonderful array of cheeses. 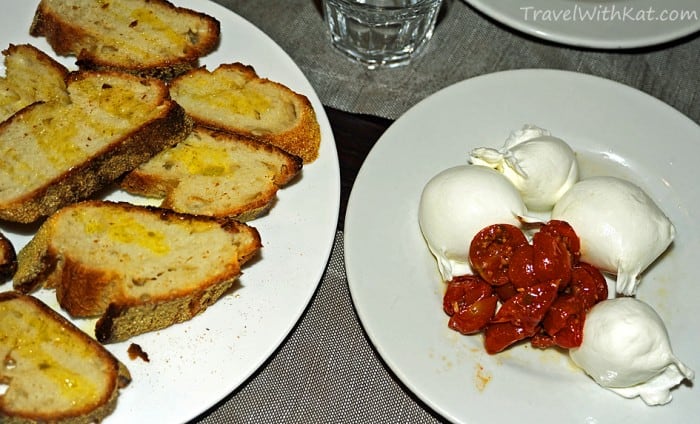 Firstly there was mozzarella made from unpasteurised water buffalo milk served with bread drizzled with a little extra virgin olive oil and semi-dried Sicilian tomatoes. I love tomatoes in cooking but not so much on their own but these were the most delicious tomatoes I’d ever eaten and I had to go back for seconds and even thirds, just to make sure they really were that good! They went beautifully with the cool refreshing mozzarella. A point to note is that handmade mozzarella is an irregular shape (rather than the uniform shape of machine-made cheese) and it should release a little milk when cut through the middle. It should not be kept in the fridge but at room temperature in the water that it came in. Although it would usually be bought daily it can kept for up to 3 days.

Other delights selected for us to sample included a 3-year-old Parmigiano, a hard dark yellow cheese that the Parmesan cheese we buy in England is imitating. It is rich in calcium as it takes a lot of cows’ milk to make a relatively small amount of cheese.

There was also a Pecorino cheese which is made throughout southern Italy from sheep’s milk but the best known is Pecorino Romano which is only produced in the province of Rome. Although a little sharper than Parmesan or Parmigiano it is sometimes used as a substitute in cooking. The real thing will have a sheep’s head logo embossed on the rind. It is an ancient cheese and also dates back to the time of the Roman Empire forming part of the rations of Roman Soldiers. 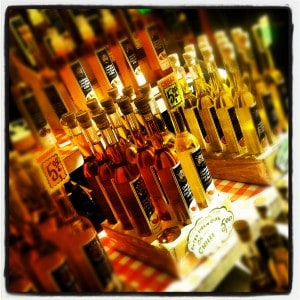 Back at the market, we made our way to the stall of Monica and Jocelma, where we tasted various delicious olive oils. Generally speaking oil from more southern regions such as Sardinia, are stronger and spicier due to the intensity of the sun and oils from more northern regions are lighter and more suitable for salad dressings.

It was the balsamic vinegar, however, that was a real surprise to me. We all know that the best balsamic vinegar comes from Modena in Emilia-Romagna. I use it quite a lot at home mainly with a little olive oil as a salad dressing but the aged balsamic vinegar we tried here was something else entirely. We tasted a number of different ages and as the age increased so did my delight as they became less vinegary, sweeter and thicker. At 8 years old the taste was sublime and I could easily imagine it drizzled over ice cream and peaches as Simona suggested. The oldest they had was 50 years and had an equally high price tag at 215 euros.

As well as olive oil and vinegar Monica and Jocelma sell many other delicious traditional sauces and liqueurs. The chilli chocolate liqueur was a definite winner with me. No wonder the stall was called Gourmet Souvenirs, it really was a great place to pick up the perfect souvenir or gift from Rome.

Do you know which type of salami is an aphrodisiac?

On top of all this, we were then treated to a wonderful range of salami with a glass of wine at the pork butcher’s in the same piazza as the market, Antica Norcineria Viola. They were all delicious, including copiette which is reputedly an aphrodisiac, but the undisputed favourite was made from pigs liver with orange zest and wine. By now I was starting to feel rather full and we hadn’t even got to the pizza making! This was another fabulous experience but I had no room for the delicious pizza we made. I saved it for later, though, and enjoyed it cold in my hotel room saving me the awkwardness of dining alone that evening. 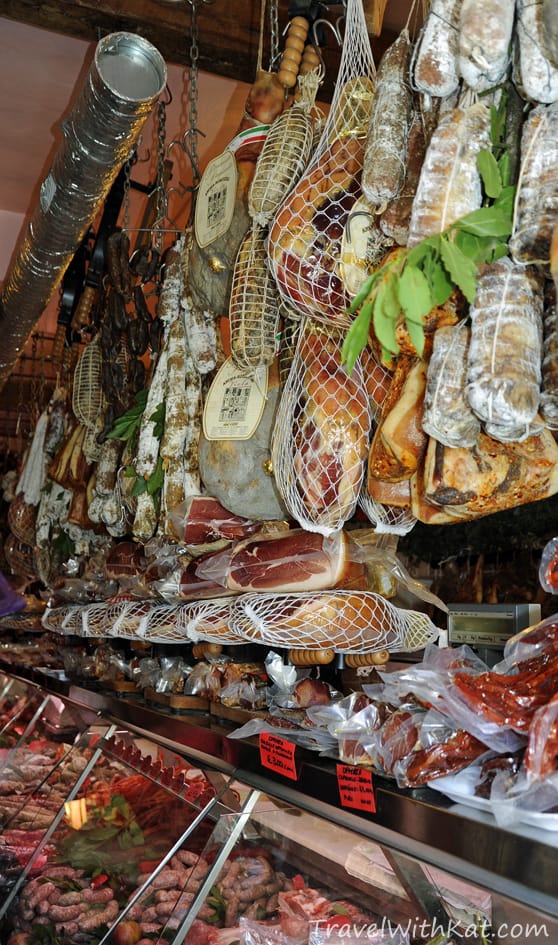 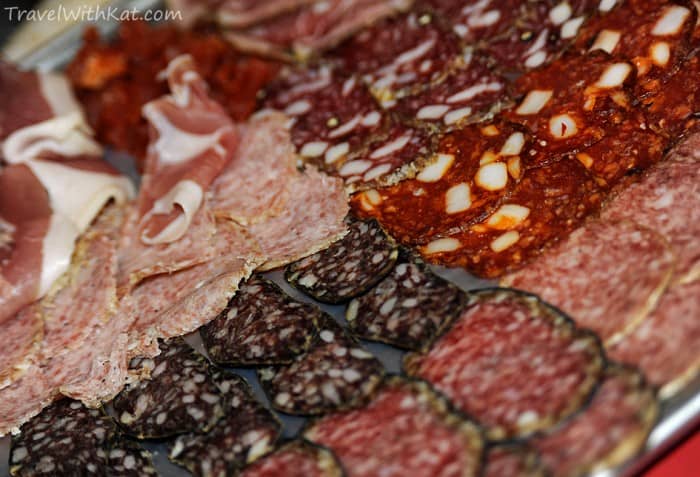 Throughout this Rome food tour, Simona gave us many fascinating insights into Italian cuisine and lifestyle. It really was a superb experience leaving our minds, taste buds and tummies fully satisfied. Even though I have visited Italy many times before I still learnt a lot. The tour ended with a stop at Sant’Eustachio Il Caffè in Piazza Sant’Eustachio for what is reputed to be the best coffee in town. There are just a few tables and chairs outside as most people drink standing at the bar but don’t forget to pay for your coffee first at the till and then take your receipt over to the opposite counter where they will make your coffee. If it’s hot but you still need a caffeine fix, I’d strongly recommend the mousse caffè served chilled, it really hits the spot!

My new American friends were great company, while we discovered the best food in Rome, and I soon felt ‘one of the girls’. More posts from Rome coming soon!

A Rome food tour is the perfect introduction to the city and I’d highly recommend booking one at the start of your stay. By the end of your food tour in Rome, you’ll know all the best places to eat and what to order!

Getting there: You can catch the No. 64 bus from Termini Station to piazza Campo de Fiori or walk from a number of metro stops in about 20 minutes or so. 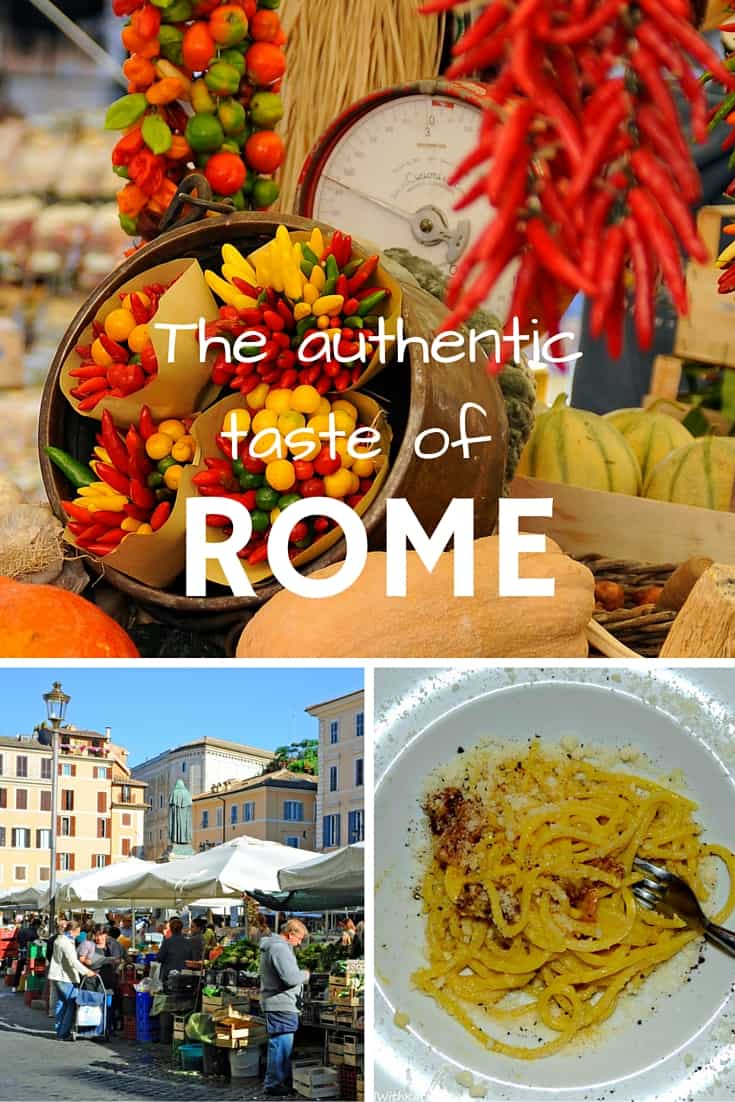