The rules of wuri! 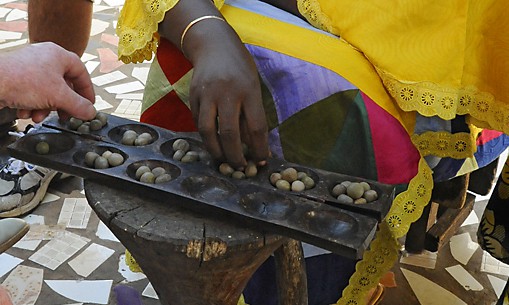 Ida teaching tourists to play an ancient traditional game from West Africa is this week’s travel snap. I love the expressions on their faces. Can anyone beat Ida?


I first came across the game of wuri when I saw a family playing it in a back street in Mindelo on São Vicente, one of the islands of Cape Verde off the coast of West Africa. A year later, this time on the island of Sal, some locals challenged me to play wuri with them. Most of the games I apparently won even though I didn’t have clue how!  Before I left the island I bought a wuri board as a souvenir but was somewhat disappointed that I didn’t understand how the game was played.

It wasn’t until a few years later when I was on an excursion in The Gambia, ‘Cooking with Ida’, that I discovered the simple rules of wuri. It was fun to see how the game brought out the competitive streak in all of us and while we waited for the fish benechin to cook we had a mini wuri tournament! 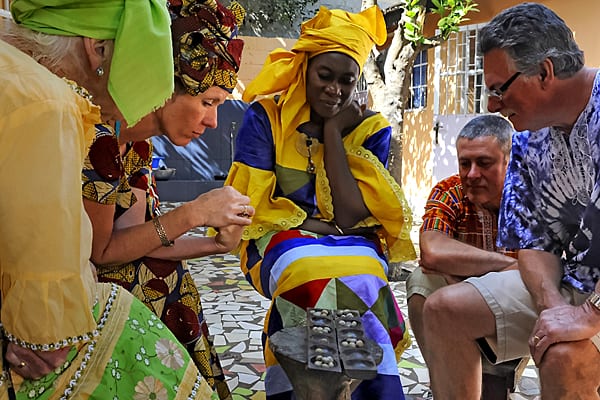 Wuri rules
This is a game for two players. The board is divided into two parts, one side for each player and each side has 6 holes or pots. Before the game starts 4 beans are placed in each hole.

Players take it in turns to pick up the beans from one pot and place a single bean in each of the next pots in an anti-clockwise direction. Each player can only play with beans picked up on their side of the board.

If the last pot they put a bean into then contains 2, 4 or 6 beans (whether it is on the players side or their opponents side) the player wins those beans and puts them to one side.

When neither player can play anymore each player counts up the beans they have won. The winner is the person who has collected the most beans.