Rodrigues Island: Getting off the beaten track in Mauritius

As we come into land I can see white horses crashing against the coral reef encompassing a small cluster of islands. Outside the reef the sea is deep blue, inside, in striking contrast, pastel shades of green and turquoise shimmer in the shallow lagoon surrounding both Rodrigues Island and 18 smaller, uninhabited isles. It is here that I discover the road less travelled in Mauritius. Measuring just 11 miles long and 5 miles wide, don’t be fooled by its diminutive size, there are plenty of things to do in Rodrigues Island, a little-known gem sparkling in the Indian Ocean.

Thank you to Rodrigues Tourism for the opportunity to visit this wonderful little island. My flights, accommodation and meals were complimentary but, as always, I retain the right to publish whatever I like about my experience. This article contains affiliate links. You can find more information about these in my disclaimer.

We’re soon above the island itself. Volcanic in origin, the landscape below me is lush and green thanks to the recent rains that typically fall each January and February. One minute the sun is shining, then there’s a sudden downpour, but it’s never long before the sun is out again. Rainbows abound on Rodrigues.

Named after the Portuguese explorer Diogo Rodrigues, this is the smallest and most remote of the Mascarene Islands that lie east of Madagascar. While everyone has heard of Reunion Island and Mauritius, few have heard of Rodrigues. Some 350 miles beyond Mauritius I am now at Africa’s most easterly point. Although self-governing it is part of the Republic of Mauritius. Having recently got back from a wonderful week there I’m pulled between hoping it stays just as it is, an unspoilt secret island with just a smattering of tourism, and a longing to shout about it from the rooftops. Many people say there’s little to do here and you only need to spend a day or two on the island. They couldn’t be more wrong. One week was not long enough. 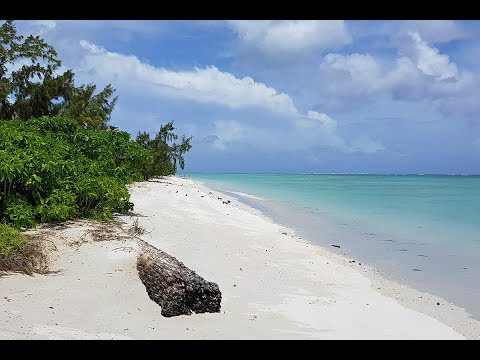 Top 10 things to do in Rodrigues Island

Pineapples, melons and bright, pink piles of dragonfruit. Pots of honey, home preserves and fiery chutneys. Piles of hats in a rainbow of colours. People laughing and gossiping – the Saturday market in Port Mathurin is as hectic as it gets on Ile Rodrigues – a kaleidoscope of colours in the sunshine. There’s a market on most mornings but it’s on Saturday that it really comes alive, although compared to many other markets I’ve been to it’s still a relatively leisurely affair. It’s a great place to photograph and everyone is extremely friendly. I just wish my French was better. Creole, French and English are all official languages of the island, however, French is much more widely spoken than English.

A fabulous network of walking trails criss-crosses the island, leading you through the beautiful countryside. We took the trail from the southern end of Saint Francois beach that leads through the wooded hillside to a series of hidden coves, known locally as crics, including Trou d’Argent Beach. If you want to go swimming, time your visit with high tide as the coral reef is very close to these beaches, making it difficult to swim here when the tide is out. You’ll need to bring your own supplies including water, as there are no facilities. While much of the walk is shaded by small pine trees, I’d also recommend using plenty of sunblock.

Rodrigues may seem a sleepy laid-back oasis trapped in time, yet there is another side to the island that is being developed for adrenaline junkies. As well as a great range of watersports that make the most of the regularly windy days, such as wind and kite surfing, two further attractions are on offer for adventure addicts, including one of the highest ziplines in the world and a pendulum swing from a suspended bridge just two planks wide. Sadly, or possibly luckily, it was closed on the day we visited. Having seen it I’m not quite so keen to give it a try. Would you?

O|n the other hand, I really wanted to do the zipline (it is even higher than the one I did over the biodomes at the Eden Project in Cornwall) but there simply wasn’t time to do everything we wanted to do.

On the first two mornings of my visit, with my internal body clock still all askew, I awoke early and walked the few minutes from my accommodation at Pirate Lodges to the beautiful sandy beach of Saint François Bay, to watch the sunrise. On another day I was lucky enough to catch the sunset from another part of the island. Was it my imagination or were the sunrises and sunsets particularly lovely on this remote island?

Check out what people are saying about hotels on Rodrigues Island

There are a couple of cave systems on the island where pirates no doubt once hid their treasure troves. I went to Caverne Patate, which translates as Sweet Potato Cave, although no one seemed to know why it was called this.

While not that far, the walk through the cave system is a little tricky in places and comfortable walking shoes with a good grip are essential. Torches were provided, which are needed to see where you are treading, and I’d take some water with you too. We were told not to, but I found it very humid inside and got rather dehydrated.

Set in a 20-hectare conservation area, Francois Leguat nature reserve is home to over 3,000 giant tortoises. It was founded by zoologist Owen Griffiths, who wished to recreate the landscape of the island from hundreds of years ago. There are over 110,000 endemic and native plants in the park.

Two species of giant tortoise once thrived on the island but with the arrival of the first immigrants, both species became extinct. The tortoises found in the park today, Aldabra tortoises, are close relatives of the extinct species and fulfill the same ecological roles of browsing, grazing and spreading the seeds of native plants. They are the last surviving species of giant tortoise that were once found in the Indian Ocean. Another vulnerable species, Radiata tortoise, one of the most beautiful species of tortoises, can also be seen in the park.

The walk through the gorge that runs through the park was wonderful, with no end of tortoises coming up to me with their necks held high, asking for a tickle. The gorge itself is beautiful and with the ground scattered with hundreds of giant tortoises, it is quite a sight.

There is nothing an Aldabra tortoise enjoys more than to be stroked on the neck.

In addition to the tortoises, there is an on-site restaurant, museums and shop, as well as an interesting cave system.

Within the lagoon of Rodrigues, which is formed by the encircling coral reef, there are a number of small uninhabited islands. We went to Coco Island, which took about an hour to reach by boat, giving you some idea of the vastness of the lagoon. It’s a place not to be missed and can only be visited by arrangement with the local tourism office.

A thin strip of soft sand runs around the edge of the island, which is surrounded by clear, azure-blue water. It’s a wonderful place to swim from and our trip included lunch and a short guided walk, where we learnt about the various species of birds that fill the air, the trees and the ground. They are everywhere!

The small yellow and green sweet lemons that grow on the island make a deliciously refreshing drink that really hits the spot on a hot day – it’s simply lemon juice, water and a little sugar. If you are after something with a bit more of a kick try Ti’ Punch made from white rum, lemon juice and honey.

Being an island it’s no surprise that seafood is popular. Wahoo and carangue fish featured on many menus and were excellent, but two of my favourite dishes were gratin de fruit de mer at Chez Paulina’s up in the mountains and salade marlin fumee (smoked marlin salad) at Restaurant le Marlin Bleu.

If you visit on 1st March don’t miss the fish festival held each year to celebrate the start of the net-fishing season. The men work as a cooperative and put out huge nets before chasing the fish into them by banging on the sides of their boats.

10. Swim, snorkel or scuba dive in the lagoon

Among the main attractions of the island has to be the lagoon and coral reef that surrounds it. The turquoise, shallow water is wonderfully warm, ranging between 22 ⁰C in August and 29 ⁰C in March – perfect for swimming and snorkelling. You’ll find world-class scuba diving here too with a great range of sites suitable for both beginners and more experienced divers. There are a number of dive centres including one at Cotton Bay hotel.

Having enjoyed a fabulous week on Rodrigues Island the words ‘You’ll get bored in a couple of days’ still echo in my ears. Don’t believe a word of it. I found a week was not long enough to fit in everything I wanted to do. As well as missing out on the zipline I didn’t manage to see the traditional dancing, Sega tambour, which is listed as a UNESCO Intangible Cultural Heritage activity, and I would have loved to have done some more hiking and snorkelling. If you then add in some time to simply relax and unwind you could easily fill a ten day or two-week holiday in Rodrigues. In fact, you may never want to leave.

Where to stay on Rodrigues Island

Being such a small island, it’s easy to get around wherever you are based if you hire a car. For most of my visit, I stayed at The Pirates Lodge just a couple of minutes walk from the lovely unspoilt beach of Baie de Saint-Francois. This is also the starting point for the hike to Trou d’Argent Beach.

The lodge was fairly basic, with a small swimming pool but the owner was particularly welcoming and even drove a small group of guests, including myself, to a mountain top restaurant one evening where we had a lovely meal in good company.

My favourite hotel on the island though is Tekoma Boutik Hotel Rodrigues. I didn’t stay here but a friend of mine did and it looked stunning. The food here, especially the breakfast, is reputedly extremely good too.

Check prices and availabilty for hotels on Rodrigues Island

Flight Time: Indirect flights are available via Mauritius from the UK taking about 13 hours

Language: English and French (most people are bilingual)

Health Information: No special vaccinations are required for travel to Rodrigues Island. For more information visit NHS Fit For Travel.