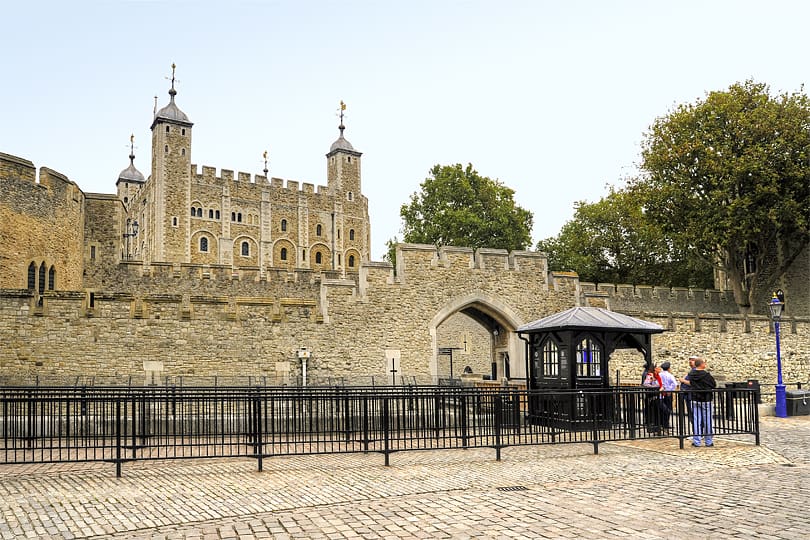 As I walk through the one foot deep, steel doors, that would have looked more at home protecting a high-tech bank vault in the latest blockbuster, I catch my breath and gaze at the bejewelled sword and scabbard suspended in the air before me. Exclamations along the lines of “Oh my goodness” or simply “Ooooo!” fill the air as a small group of us wander, bedazzled by the displays before us, through the Jewel House (pictured below), home to Britain’s Crown Jewels in the Tower of London.
>

This fabulous collection of scepters, swords, rings and most famously, crowns are the symbols of the Windsor family’s right to rule over the United Kingdom. And what a sight it is!

I gaze in wonder at the solid gold crown of St. Edward (1661) weighing nearly 5lb (2.23kg). It’s the heaviest crown in the collection, while the Crown of Queen Elizabeth the Queen Mother (1937) is the only platinum crown. The largest object in the collection, at over a metre wide, is the spectacular and staggeringly impressive, silver-gilt Grand Punch Bowl (1830) which holds 144 bottles of wine. And the oldest object in the collection is the 12th century Coronation Spoon. Sadly, and oh so frustratingly, photographs are not allowed and my words could never do justice to these priceless treasures which include some of the most famous diamonds in the world.

The largest rough diamond ever known, weighing an astonishing 3,106 carats (621g) was the Cullinan, found in Africa in 1905. From this a number of diamonds were cut, two of which are found in the Crown Jewels. These are the largest diamonds in the collection, adorning the Sovereign’s Sceptre with Cross and the Imperial State Crown.

The most famous diamond in the world, however, is also here, namely the 105.6 carat Koh-i-Noor diamond meaning ‘Mountain of Light’ in Persian. This diamond is believed to be thousands of years old and it was said that whoever owned it would rule the world but any men that owned it would also know great misfortune. Only God and women can wear it with impunity.

Today it is set in the Crown of Queen Elizabeth the Queen Mother but this diamond has a bloody history, passing through the hands of great emperors and warriors before finally coming to Britain in 1805 when it was presented to Queen Victoria, as the spoils of war in India.

The Crown Jewels collection leaves me speechless and on leaving the Jewel House and walking back into daylight, the wonders I have just seen fade into myth and legend. It’s almost as if I’d imagined them.

When I think of the Tower of London, an image of what is actually the White Tower springs to mind. However, within the outer walls there is a large complex of buildings with the White Tower at the centre. Collectively they all form The Tower of London, a UNESCO World Heritage Site. I was surprised to find out that some 50 to 60 people live here, with their own doctor, chapel and even a pub. And I certainly never expected to see a quintessentially English, village green bordered on two sides with beautiful half-timbered houses within the fortress’s walls.

On 5th August 2014, to mark the 100 year anniversary of the first full day of Britain’s involvement in the First World War, a major new installation which will eventually total 888,246 of ceramic poppies, was revealed in the moat surrounding the outer walls of the Tower of London. Each poppy represents a British military fatality during the war. It’s an amazing site. For more information, including how you can buy a poppy visit Tower of London Remembers.

The community here are mainly the Yeoman Warders, more commonly known as Beefeaters, and their families. As well as guarding the Tower and its contents, they act as tour guides and are a tourist attraction in their own right. They are detachment of the ‘Yeomen of the Guard’ and have formed the Royal Bodyguard since the early 16th century.

As I explore the grounds it isn’t long before I spot a couple of the Tower’s famous ravens. It is said that if they ever leave, the Tower and indeed the Kingdom, will fall. Knowing of this legend it was Charles II who first decreed that at least 6 ravens must be kept at the Tower at all times. They all have names and Hugine, a large female, is as obliging as the Beefeaters when it came to posing for my camera. She really is a beauty.

The Tower of London is well-known for once being a prison. People were often imprisoned here following the merest whisper of treachery or at the slightest whim of the King or Queen and many, no doubt, were falsely accused. While some people were eventually released, many others were put to death but very few were actually killed within the Tower walls. Most were led off to the nearby Tower Hill for a public execution. Only the highest ranking prisoners, such as some of the unfortunate wives of Henry VIII, were executed privately within the walls of the Tower of London.

One of the great mysteries of the Tower of London is what happened to the two young princes, namely 12-year-old Edward V of England and his younger brother, Richard of Shrewsbury, Duke of York. They were the only sons of Edward IV of England still alive at the time of their father, the King’s death. Their uncle, Richard, Duke of Gloucester, was appointed to look after them and they went to live in the Tower of London. However, one day they simply vanished and Richard, the next in line, became the next King of England.

It is not surprising that with so many sombre tales that one of the houses in the complex is said to be one of the most haunted in England.

I leave the Tower of London through a small room, tucked away in the walls, where some instruments of torture are on display; a grim and sobering reminder of the Tower’s past. As I step out into the sunshine the sound of the rack behind me being tightened sends icy shivers down my spine.

My thanks to City Wonders for this excellent and well organised guided tour of the Tower of London, which was just part of one of their many tours in a number of cities around the world. While this tour was complimentary, as always I will give you my honest opinions.

For more information about The Tower of London visit their official website.