What is a traditional Japanese Breakfast? 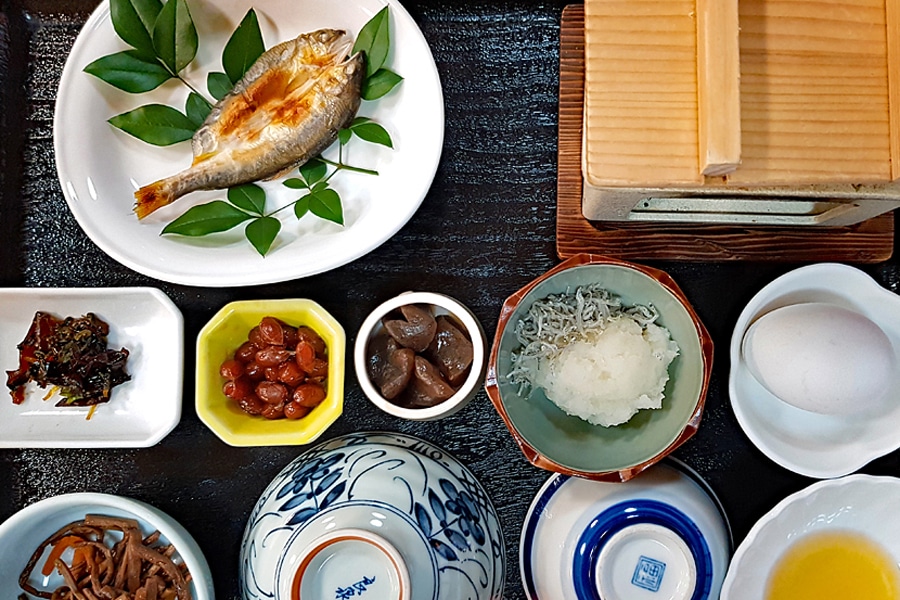 The first time I visited Japan, one of the many things I was looking forward to was the food. Local cuisine always plays a big part in my travels. I had heard a great many good things about food in Japan plus I adored the Japanese dishes I had eaten in restaurants in England. Did the food in Japan live up to my high expectations? Let’s start with the first meal of the day. What is a traditional Japanese breakfast?

I travelled to Japan on a press trip and my travel, accommodation and meals were complimentary, however, I will only ever share with you my honest opinions. Please be aware that some links on this website are affiliate links, which means if you click on them and go on to buy a product, I may earn a commission at no extra cost to you. Find out more in my disclaimer.

Breakfast in Japan, as in most cultures, is an important meal setting you up for the day ahead. A traditional breakfast in Japan is a well-balanced mix of all the nutrients you need. It consists of several small dishes, as is typical with traditional Japanese food or Washoku (和食) as it is known.

White rice or gohan is a staple food in Japan, and it always makes an appearance in a typical Japanese breakfast. The words for breakfast are asa gohan, which translates as ‘morning rice’. The rice comes with numerous other small dishes, some common throughout the country, others seasonal or local specialities.

Top tip: Don’t expect coffee! A traditional breakfast is served with tea. Coffee is available in areas popular with foreign tourists and is growing in popularity with locals in the cities.However, if you are staying anywhere traditional or even a business hotel but epsecially if you are off the beaten track, you’ll probably need to take your own.

Cracking a raw egg over the rice and seasoning with a little soy sauce and salt is another popular breakfast dish called tamago kake gohan. Apparently, the eggs are sorted, cleaned and carefully inspected for cracks by high tech machines to make sure the eggs are safe to eat raw but don’t take my word for it.

The primary source of protein in a traditional Japanese breakfast is a small portion of grilled fish. 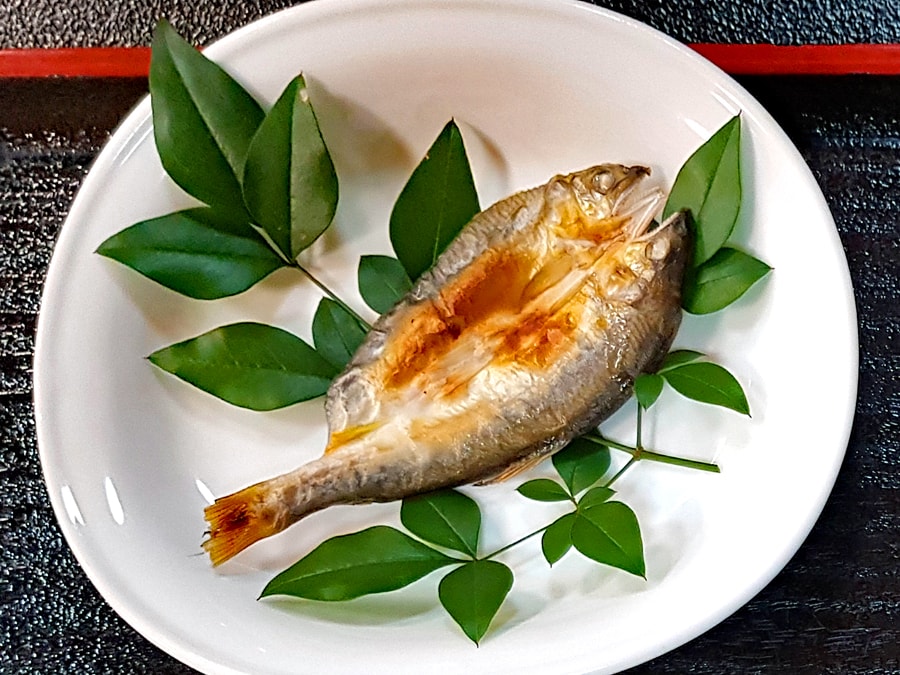 Eggs are another popular protein source for breakfast. Onsen tamago is an egg soft boiled at about 65 °C, preferably in natural hot spring water as we had here. Handily our ryokan was also an onsen (a hotel with a hot spring for bathing). Egg yolk solidifies at a lower temperature than egg white does. So cooking the egg at a lower heat results in the white staying silky and the yolk firm yet with the colour and texture of an uncooked yolk. It’s almost the opposite of a soft boiled egg that we are used to which has a cooked firm white and runny yolk.

I cracked open my partially cooked egg and dropped into a sauce made from dashi (fish, kelp and shiitake mushroom stock), soy sauce and mirin (rice wine). 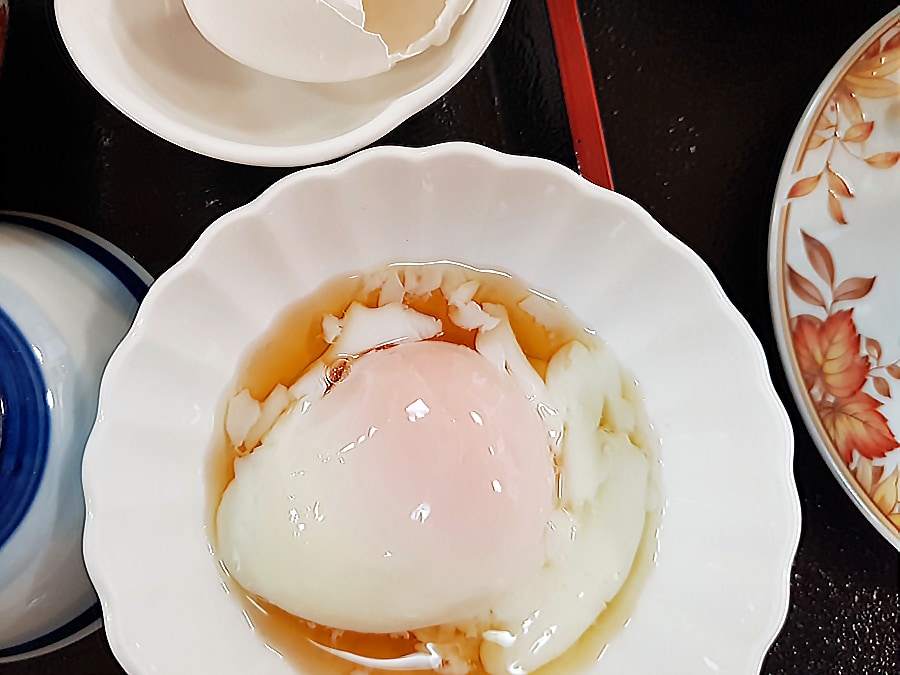 This wasn’t included in our breakfast but Tamagoyaki is another popular breakfast dish. It’s simply an omelette made with a little sugar, soy sauce and dashi or bonito flakes (also known as katsuobushi, dried, fermented, and smoked skipjack tuna), folded or rolled up and then sliced.

A bowl of miso soup is another integral part of a Japanese style breakfast. It is made by dissolving miso paste in fish stock and adding additional ingredients such as spring onions and tofu.

Tofu is another popular healthy Japanese food that everyone eats, not just vegetarians. Its made of curdled soy milk pressed into blocks.

In the summer tofu served cold, hiyayakko, with grated ginger, spring (green onions), katsuobushi (see 4.) and a dash of soy sauce. In the winter it’s served hot in miso soup or, in this case, with shredded Japanese cabbage, 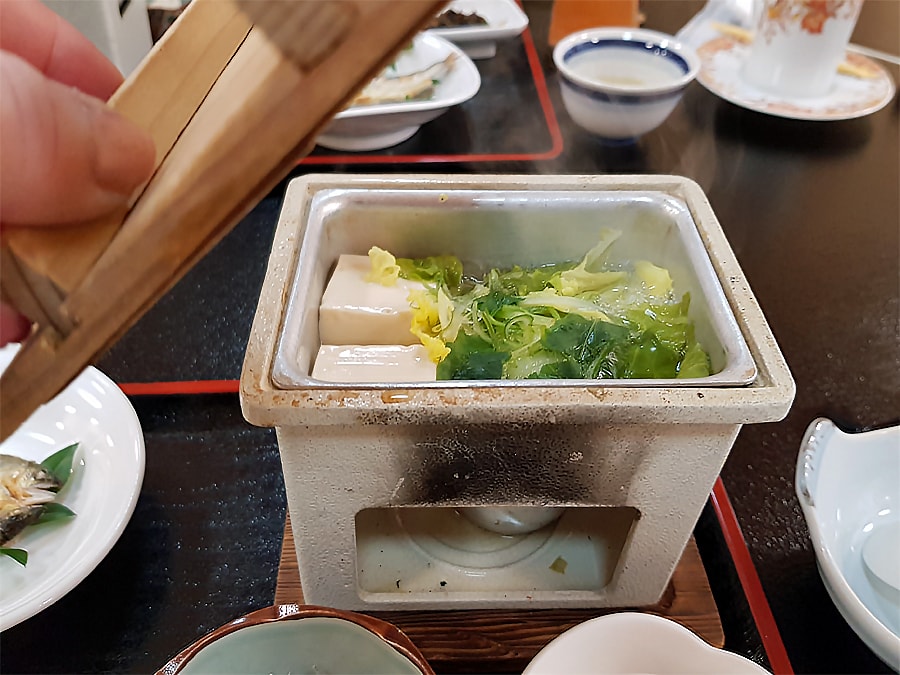 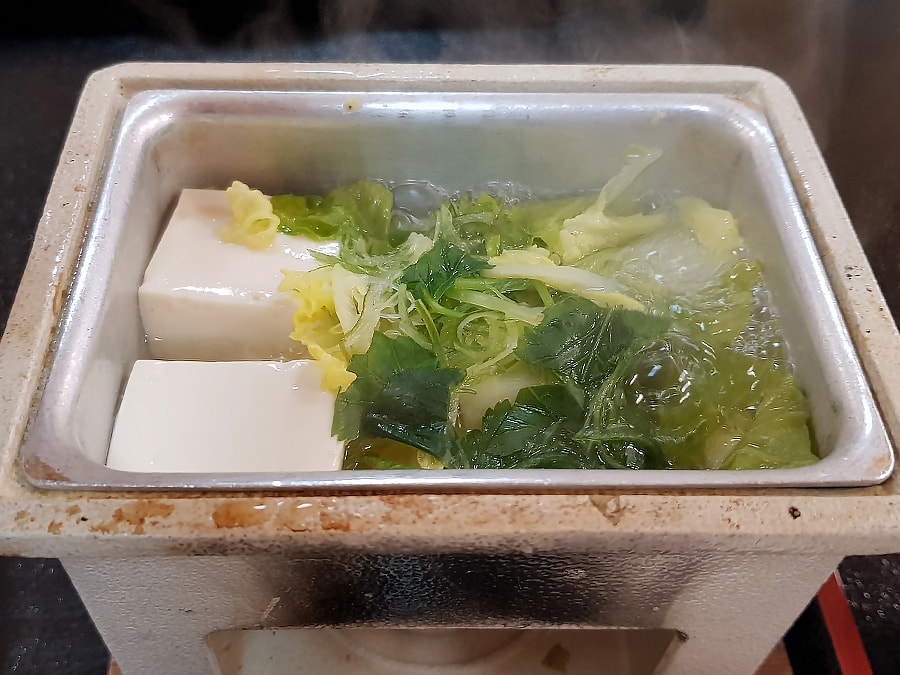 Soybeans fermented in a bacteria called Bacillus subtilis and then aged for about a week. They are pungent and slimy are not my idea of a great breakfast, I have to admit. However, they are extremely popular with the locals. Apparently, they’re an acquired taste that is well worth acquiring!

They are usually eaten with rice and flavoured with Japanese mustard (karashi). I’ve heard them compared to marmite, you either love them or hate them. 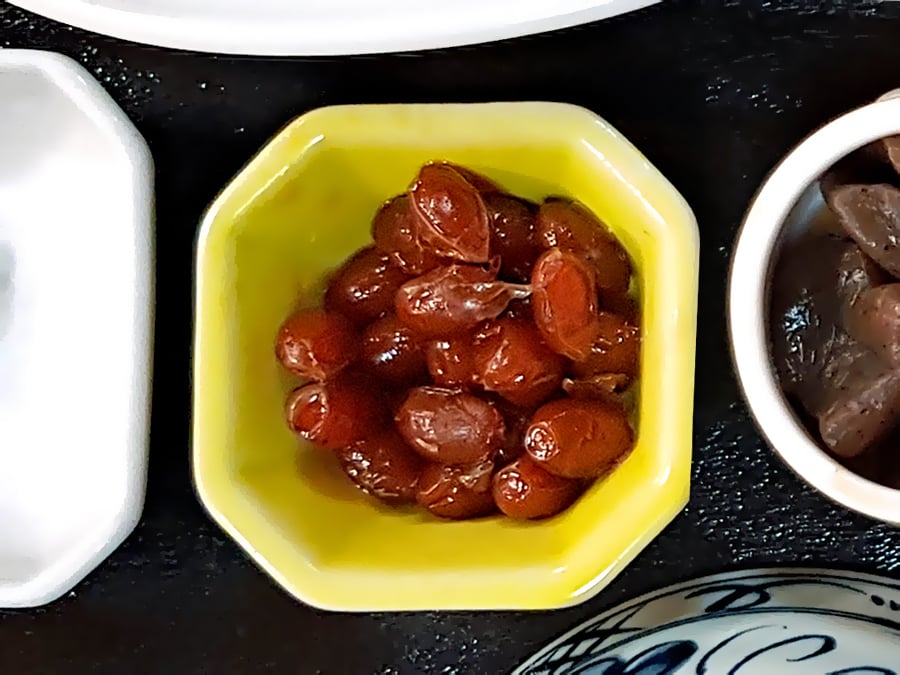 Are you planning a visit to Japan? Check out my 35 top tips for first-time travellers to Japan. Plus, find things to do, and save money on hotels, flights or package holidays on TripAdvisor. They compare prices from all the most popular suppliers to find you the best deals. And don’t forget your travel insurance!

This was one of the first meals I ever ate in Japan and to that point, Japanese food really wasn’t floating my boat but all that was about to change!

Have you tried a traditional Japanese breakfast? Did you love it, hate it? And where’s the best place to try one? 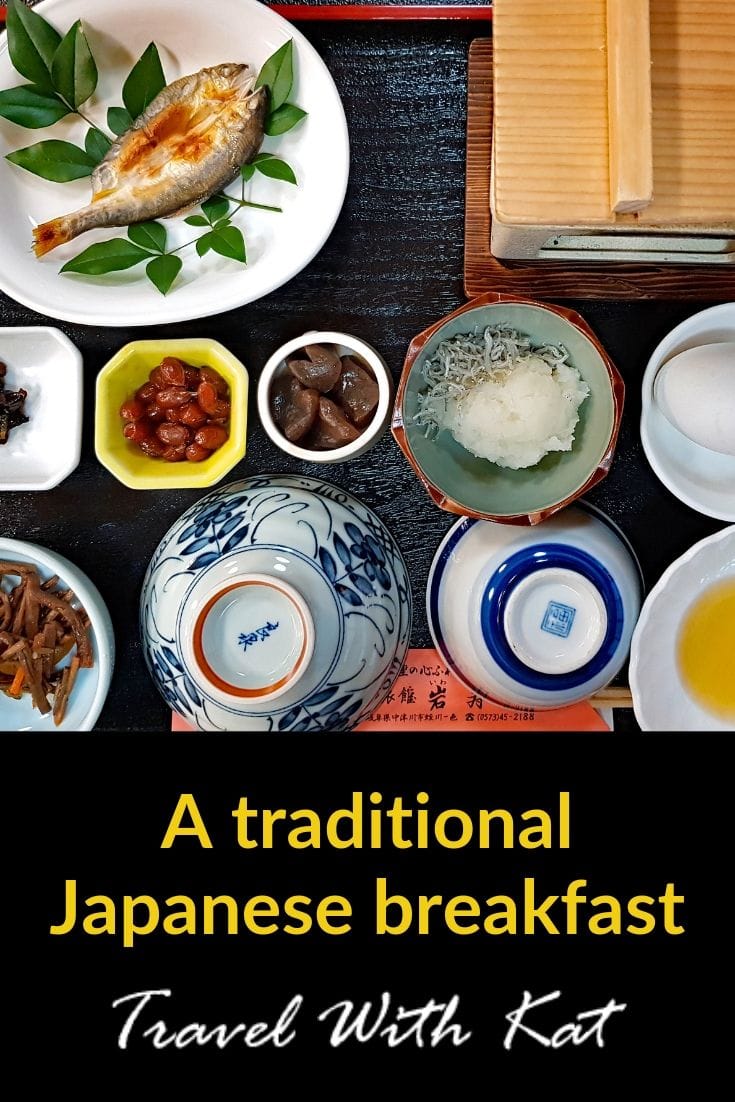 The most awe-inspiring landmarks in China

Seven not-to-be-missed landmarks in China, selected from the vast array of unforgettable sights across this vast historic country.