Magnificent trees, avenues and forests around the world

Walking through the dappled sunlight, the sound of a gentle breeze rustling through the leaves high above me, the occasional bird call –  I can’t think of anything more relaxing than a walk through the woods. Whether near my home on the south coast of England or many miles away, a walk surrounded by Mother Nature is a great stress-buster.

Trees and forests are also great subjects to photograph, but it can be hard to capture their beauty and majesty. Starting with some of my own photographs, here’s a collection of tree tunnels, avenues and even a living tree bridge that travel bloggers around the world have photographed.

One of my favourite walks near my home is this magnificent tunnel of trees made from oak, hazel, field maple and black bryony along an old Roman road in the village of Halnaker. When the path comes out of the tunnel it leads up a hillside to Halnaker Windmill and a stunning view of the surrounding countryside, part of the South Downs National Park.

Another local gem is Kingley Vale, a National Nature Reserve also in the South Downs National Park. It has a wonderful nature trail that leads you through ancient woodlands and up into the hills above where you’ll see four Bronze Age burial mounds known as the Devil’s Humps.

In the valley near the start of the trail, you’ll find possibly the oldest living things in Britain, gnarled and twisted yew trees, some believed to be over a thousand years old. Their branches are contorted into strange shapes, some snaking down to the ground where they have grown secondary roots. The shade they produce is so dense that nothing else can grow below them.

Where to stay in and around the South Downs National Park.

One of the highlights of my visit to Northern Ireland earlier this year was a drive out of Belfast to visit the Causeway Coast. Snow was falling and some of the roads were closed so I was relieved when we reached the Dark Hedges, one of Northern Ireland’s most photographed places and a filming location for Game of Thrones. It was a place that I had been yearning to photograph for a very long time. I’d love to revisit it at different times of the year, but I think it is particularly stunning under a dusting of snow.

Where to stay near The Dark Hedges.

As if the 25-acre oceanfront Aqua Kauai Beach Resort in Lihue, Kauai wasn’t lush enough, with its landscaped lagoons, lava grottoes and waterfalls, it also has a grand and shade-providing tunnel of banyan trees. The tree tunnel leads in and out of the property, welcoming guests as they first enter, leave, and return. When I stayed here I looked forward to driving through the tunnel, and it was especially nice when returning. The hotel has plantation-style architecture and a spectacular pool complex with a sand-bottom pool and lava-tube waterslide for kids. All this and they serve up a delicious mai tai, too! 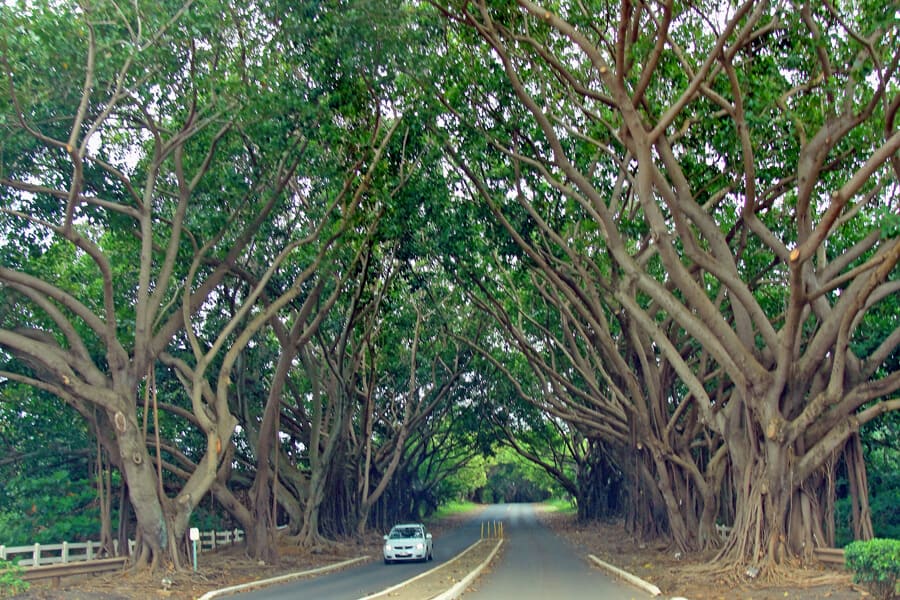 Where to stay in Lihue.

By Kate, Our Escape Clause

I’ve been obsessed with what my seven-year-old self dubbed ‘tunnels of trees’ since I was a little girl, but nowhere does them quite like the Southeast USA – the Spanish moss that drips from the enormous oak trees in that part of the world creates a mysterious, magical vibe that fits right in with a city like Savannah, Georgia, home to one of my favorite tunnels of trees.

The Wormsloe Plantation’s mile-long driveway has been meticulously crafted into an absolutely majestic tree tunnel, and Savannah’s tourists aren’t the only ones who have come flocking. Hollywood has used the plantation in several movies, most famously in Forrest Gump (look for the tree tunnel the next time you watch Jenny call out, “Run, Forrest, run!”). 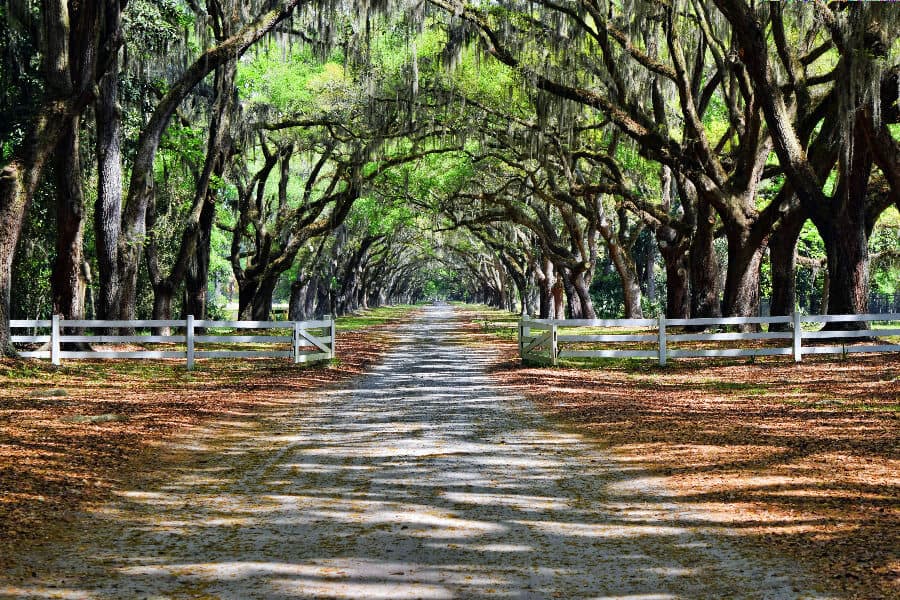 Where to stay in Savannah.

The Margaret River region of Western Australia is one of the country’s most beautiful, not least for its abundance of Karri Forest Drives. Lots of rural areas around this region have gravel roads, easily navigable in a 2 wheel drive car or van. The region’s karri trees are huge and can reach up to 90 metres in height, and are easily recognisable by their straight trunk that doesn’t break into branches until near the top of the tree. The South West giants live to be 300 years old, and getting lost in one of these karri forests reflects on the power and stability of the miracle of nature. I drove through the Boranup Karri Forest as part of my Melbourne to Perth Drive, but different forests can be enjoyed by any traveller in Albany, Denmark or the Margaret River.

Where to stay in Margaret River.

Yosemite National Park is home to some of the largest sequoias in the World. Mariposa Grove is a sequoia grove in the southernmost part of the Yosemite National Park. Two of these giant sequoias are amongst 30 of the largest sequoias in the world. The oldest sequoias here are around 2,000 years old. Some of the trees have a tunnel cut in them so that people can walk right through them. And some are even big enough for cars to drive through them. Visiting the Mariposa Grove and seeing these giant trees in the snow is a really memorable experience. 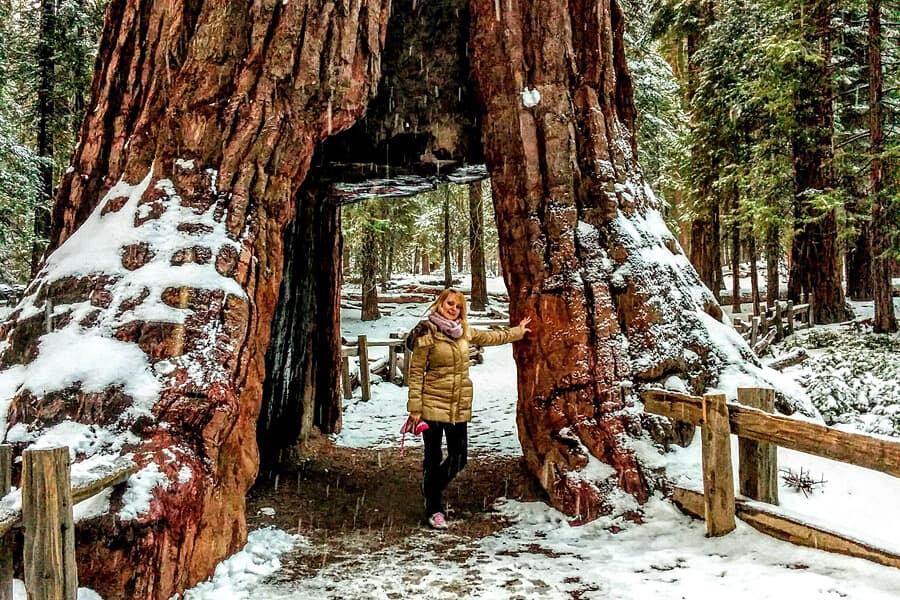 Where to stay in Yosemite National Park.

The name alone evokes a sense of majesty and antiquity. This precious little pocket of old-growth forest, also termed primary forest or ancient woodland, is located along the Highway 4 on Vancouver Island in British Columbia.

Once tended under the stewardship of First Nations dwellers, this protected habitat containing tree species such as Douglas Firs, Red Cedars and Hemlocks forms a rare, self-sustaining ecosystem. Some of the trees are more than 800 years old, their ridged and furrowed trunks soaring high above the forest floor.

When these ancient giants succumb to the ravages of time, and come to the end of their life, they continue to nurture in a fascinating demonstration of regeneration. The remnants, known as ‘nurse logs’ recycle their nutrients so that new, emerging flora such as mosses, ferns, huckleberry and young trees can flourish.

Walk among these arboreal veterans, and they’ll whisper their captivating tales about the circle of life. You could easily believe Cathedral Grove to be the original enchanted wood.

Where to stay near Cathedral Grove.

“The Switzerland Trail” was a scenic narrow-gauge railroad line that operated in the late 1800s and early 1900s along the Front Range mining region in Colorado. The track has long since been ripped up, but parts of the railroad grade remain intact and today it’s a hidden gem for easy hiking, and different parts of it are also open to mountain bikes, horses, and/or motorized vehicles. The section photographed here lies inside Boulder County Open Space and travels through beautiful meadows and forests, and to one of the historic train stops at the Bluebird Mine.

It’s closed for several months of the year as a birthing ground for elk in the region, but is open and glorious in the autumn, when Colorado’s famous quaking aspens turn the Rocky Mountains into hills of gold. Late in the season, the aspens can turn orange and even red. 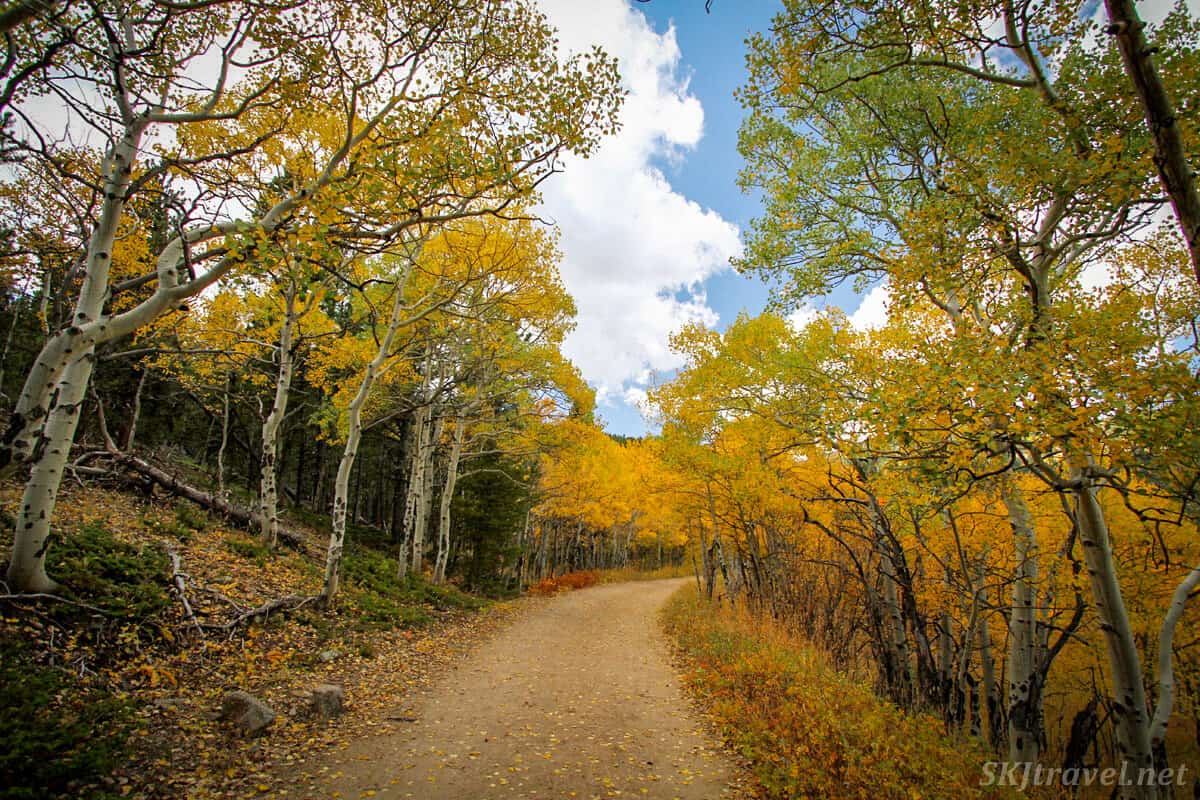 Where to stay in Boulder.

Norfolk Island is a small island in the South Pacific halfway between New Zealand and Australia. Along with stunning coastal scenery and a fascinating colonial past, the island boasts some beautiful natural landscapes. One example is this avenue of Moreton Bay Fig trees that grow at Rocky Point on the south west coast of the island. They mark the entrance to the 100 Acres Reserve just a 10 minute drive from town on Headstone Road. Of course, on Norfolk Island, not much is more than a 10 minute drive from town, but there’s a lot to do packed into the small space.

The roads around the island are all country lanes like this but this section was particularly beautiful under the tunnel of these dramatic trees. Morton Bay Fig trees usually grow like this with their distinctive raised buttress roots. What do they remind you of, a magical enchanted forest or Jurassic Park?

Where to stay on Norfolk Island.

By Yulia, The Foodie Miles

One of the most stunning tree tunnels I have ever visited is an hour’s drive from the city of New Orleans, on the West bank of the Mississippi River. The alley created by a double row of southern oak trees is so grand and impressive that the plantation where it is located was named after this distinct feature – Oak Alley Plantation. The alley stretches 800 feet (240 meters) long from the mansion to the River.

Not only can you walk down the alley and marvel at the magnificent oaks, but you can also take a tour of the mansion and learn about daily lives of the former plantation owners, Jacques and Celina Roman. The picture of the alley was taken from their master bedroom and portrays what the couple used to wake up to every morning.

Oak Alley was built in the 18th century as a sugar plantation by enslaved men, women and children. On the grounds, you can find a self-guided exhibit that focuses on some of the people who were kept at the plantation and their living conditions.

What’s more, Louisiana has some of the best seafood you could hope to find, another great reason to visit.

Where to stay near Oak Alley Plantation.

By Sebastiaan, Lost with Purpose

Meghalaya, a sleepy state in India’s rugged northeast, bills itself as ‘The Scotland of the East’. And although the comparison is apt at times, the state houses a natural wonder unrivalled by anything Scotland can conjure: living root bridges.

As the name suggests, living root bridges are made by training a species of Indian rubber tree to connect with roots from the same tree on the opposing side. The trees are trained by the ingenious Khasi people, tribal people who live mostly in Meghalaya.

The Khasis use betel nut tree trunks, sliced down the middle and hollowed out, to create root-guidance systems. The roots are then forced to grow out, and are only allowed to take root in soil on the other side of the river. The process takes 10-15 years, and requires constant maintenance by the Kashi people. The result however, is stunning, and a true testament to how man and nature can work together.

Where to stay in Meghalaya.

Thank you to everyone who took part with your glorious tree photography.

Disclosure: This article contains affiliate links, so if you click through from my site to TripAdvisor, I gain a small commission at no cost to you. This will go towards the running costs of my blog for which I am grateful, thank you.